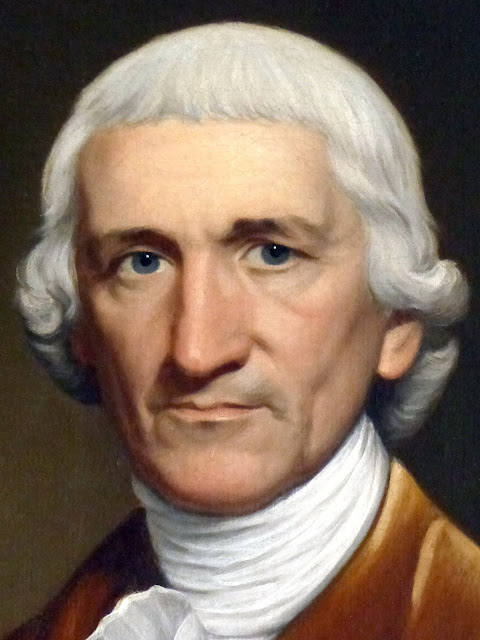 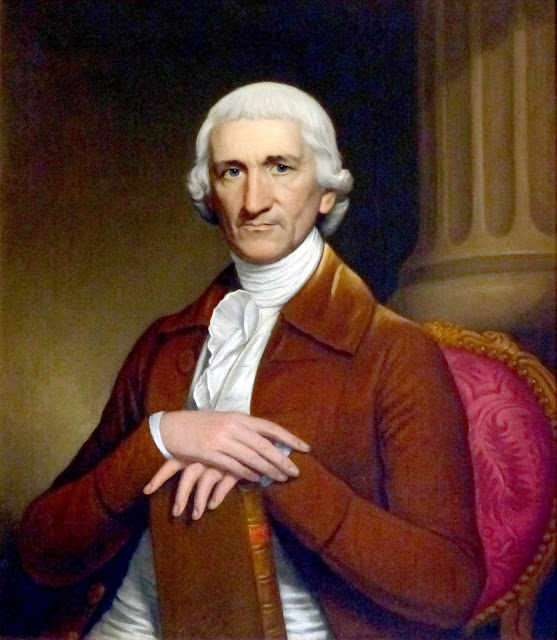 This c. 1785 portrait of Charles Thomson by Joseph Wright hangs at Tudor Place in Washington DC.


Charles Thomson (November 29, 1729 – August 16, 1824) was an Irish-born Patriot leader in Philadelphia during the American Revolution and the secretary of the Continental Congress (1774–1789) throughout its existence. -- Wikipedia 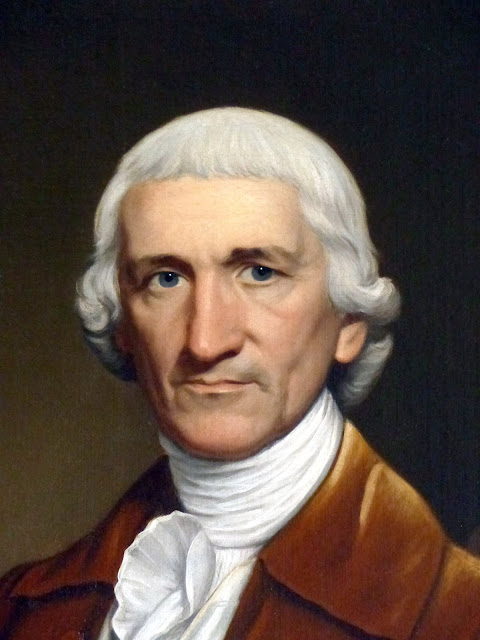 Lossing, in 1857, gives us this portrait of Charles Thomson. 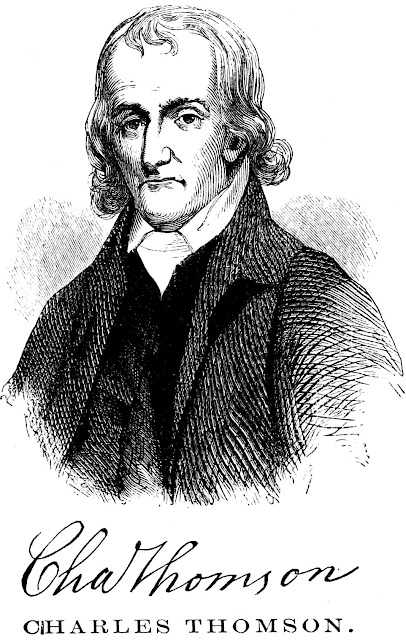 Thomson was the sole secretary of both the Continental Congress and the Confederation Congress. He is prominently shown in John Trumbull's  painting of the signing of the Declaration of Independence. 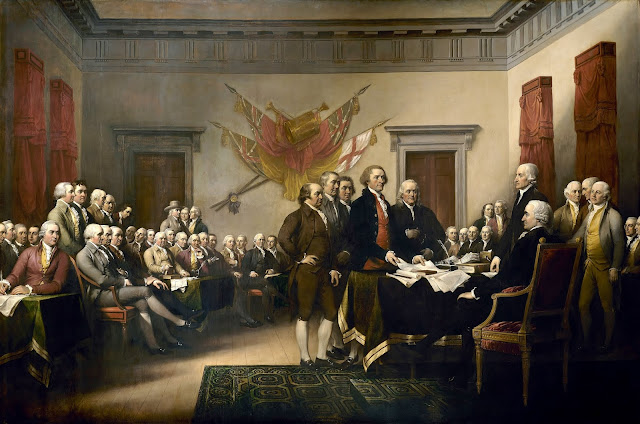 That's him standing behind the desk  next to John Hancock (sitting). 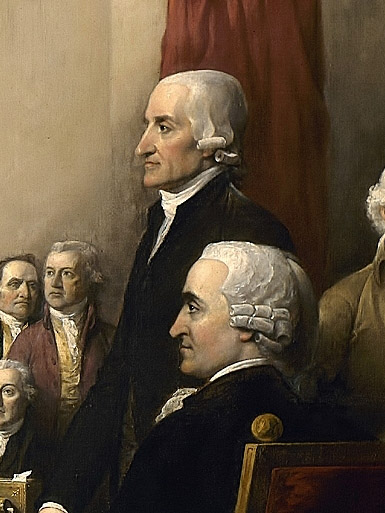 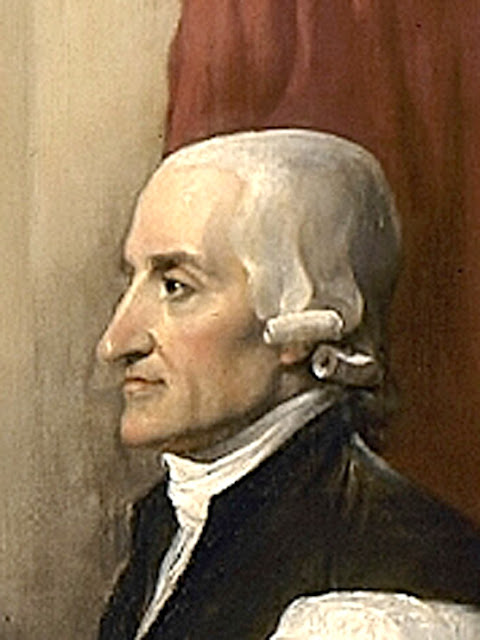 A few hours after the declaration was signed, Congress appointed a committee to design a Great Seal for the United States. Franklin, Jefferson and Adams produced a complicated design that was tabled by Congress. After two more committees failed to produce a final design, Secretary Charles Thomson put together elements from the various proposals to produce this design which with some adaptation was adopted.in 1782. See this page at the Archives. 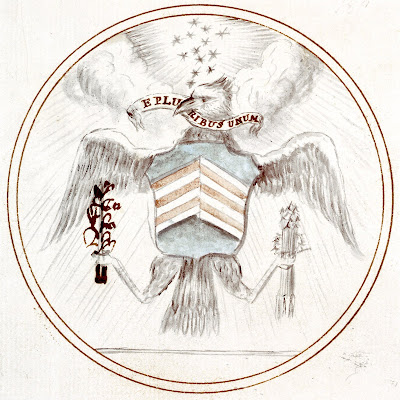 Before he became secretary to Congress, Thomson acted as secretary to Teedyuscung, the self-styled "King of the Delawares" in 1758 during negotiations between the Lenape chief and the Penn family (the Easton Treaty). Thomson reported in his Enquiry into the Causes of the Alienation of the Delaware and Shawanese Indians from the British Interest that:


“As the Indian King had been for four or five Days (viz. from the Day before the publick Treaty began, to the Time of his delivering this Speech) kept almost continually drunk, it is not to be wondered that several Parts of his Speech, as it stands in the Minutes, appear dark and confused, as they did to the Governor; more especially as the Interpreter, at the Time the Speech was delivered, was dozen at the Time the Speech was delivered, was dozed with Liquor and Want of Sleep.”

In retirement, Thomson wrote a history of the American Revolution which he destroyed unpublished and produced a new translation of the bible from the Greek. 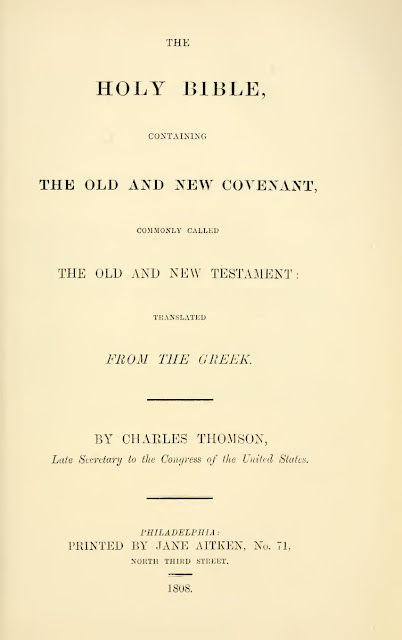 He died on August 16, 1824 and was buried at Harriton in Bryn Mawr PA. In 1838 his remains (and those of his wife Hannah) were moved to  Laurel Hill Cemetery in Philadelphia and buried under at 16 foot obelisk.


This monument
Covers the remains of the
Honourable
CHARLES THOMSON
The first, and long
The Confidential Secretary of the
Continental Congress,
And the
Enlightened benefactor of his country
In its day of peril and need.
Born November 29, 1729,
Died August 16 1824,
Full of honours and of years.
---
As a Patriot,
His memorial and just honours
Are inscribed on the page
Of his country's history.
---
As a Christian,
His piety was sincere and enduring,
His Biblical learning was profound,
As is shown by his translation of the Septuagint.
As a man,
He was honored
Loved and wept.
---
Erected
To the memory of an honoured
Uncle and Benefactor.
By his Nephew,
John Thomson, of Delaware.