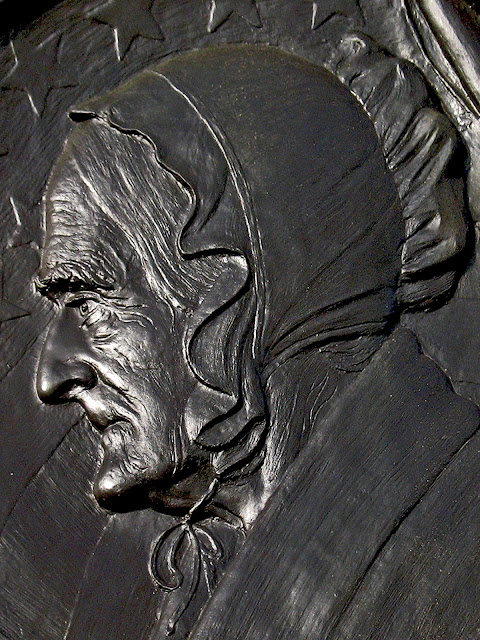 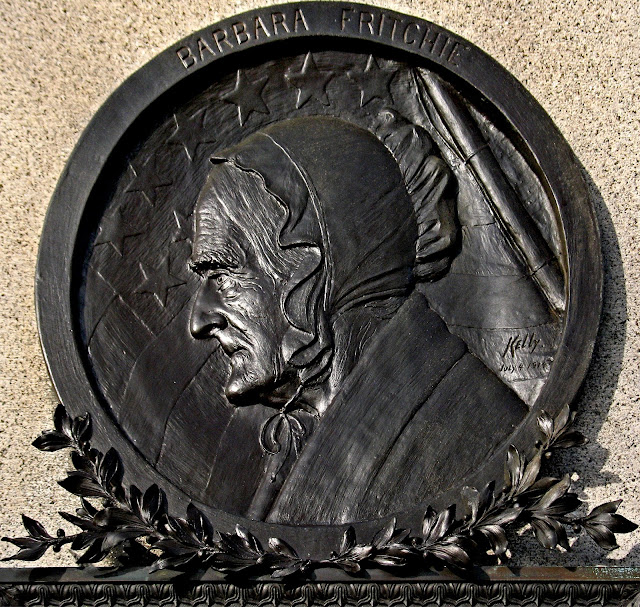 This 1914 medallion portrait of Barbara Fritchie by James Kelly adorns her grave in Mt. Olivet Cemetery in Frederick, Maryland.


"Erected by the Barbara Fritchie Memorial Association in September 1914, it was unveiled as part of the ceremonies of the Star Spangled Banner Centenary. The monument is a large granite obelisk bearing a tablet containing John Greenleaf Whittier’s 1863 poem Barbara Fritchie. Above the tablet is a medallion created by the New York City sculptor James E. Kelly that depicts Fritchies profile, executed from an old time photograph, in front of a waving American flag. Fritchie, the subject of John Greenleaf Whittier’s poem, patriotically defied Stonewall Jackson and his Confederate Army as they marched past her Frederick home on September 10, 1862. The poem was very popular in the north but unfortunately she would never know the notoriety she had achieved, because she had died a year earlier at the age of 96." -- Wikipedia 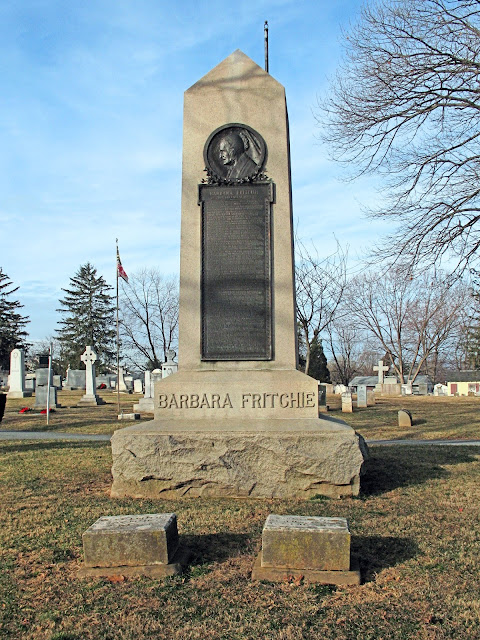 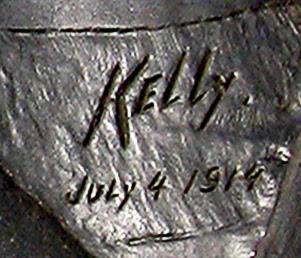 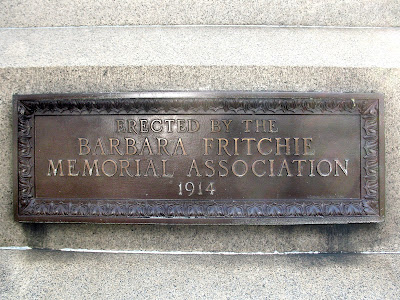 Barbara Fritchie was originally buried in the Episcopal Cemetery in Frederick. 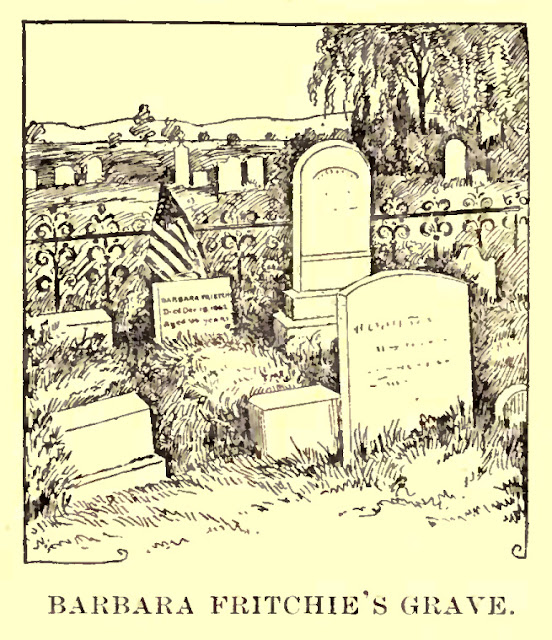 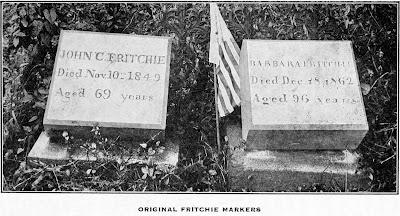 When Barbara Fritchie and her husband were moved to Mt. Olivet Cemetery in 1914, these small headstones were moved too. 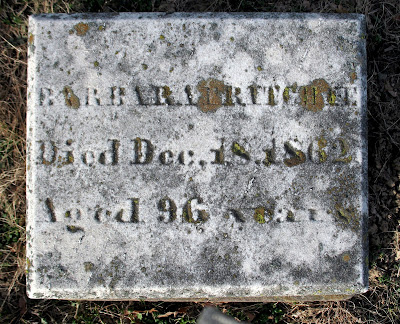 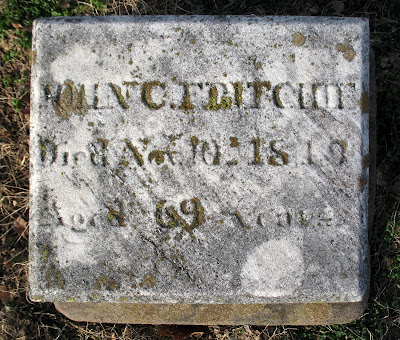 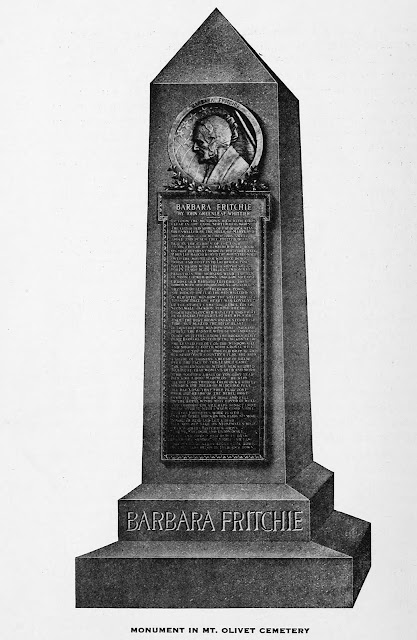 This illustration by Samuel Sartain, appeared as the frontispiece of Woman's Work in the Civil War, A Record of Heroism, Patriotism and Patience, by  Linus Pierpont Brockett and Mary C. Vaughn, 1867. 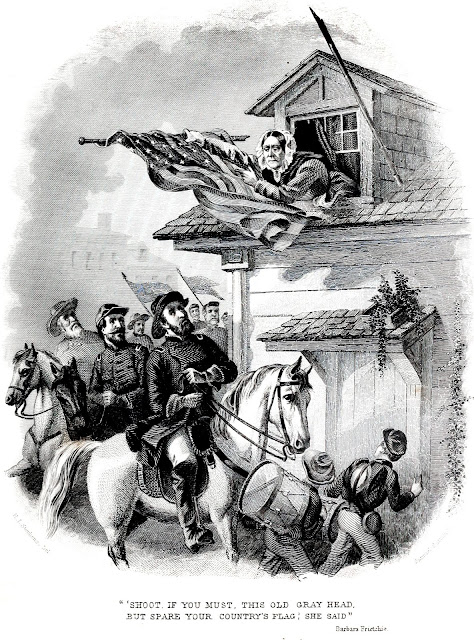 "Shoot If You Must, This Old Gray Head,
But Spare Your Country's Flag; She Said"
- Barbara Frietchie 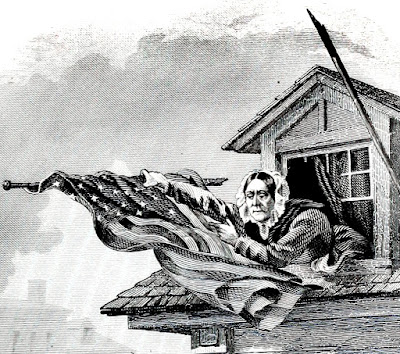 So in the words and handwriting of  John Greenleaf Whittier: 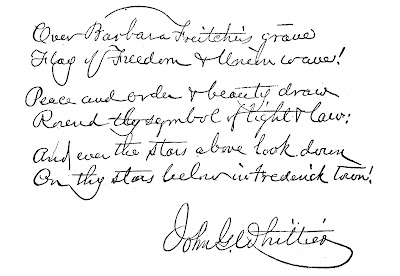