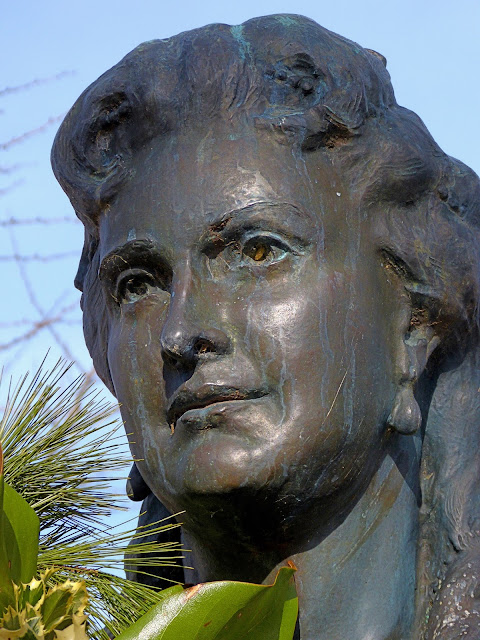 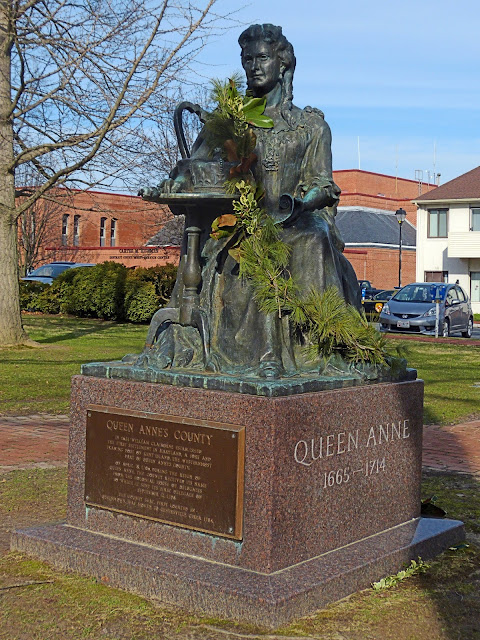 This 1977 statue of Queen Anne (1665-1714) by Elisabeth Gordon Chandler stands in front of the Queen Anne's County Courthouse in Centreville, Maryland. 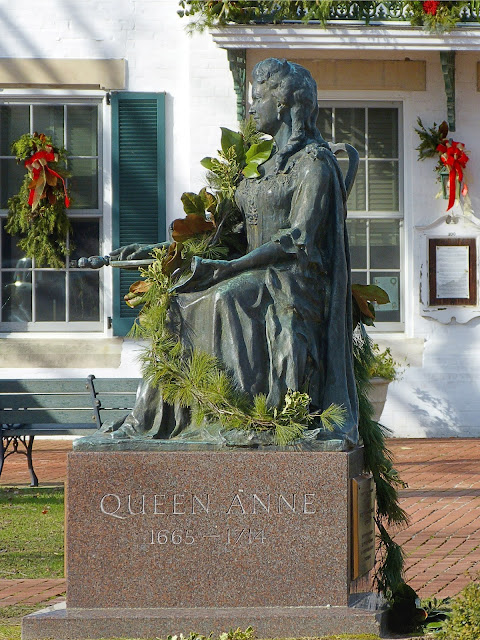 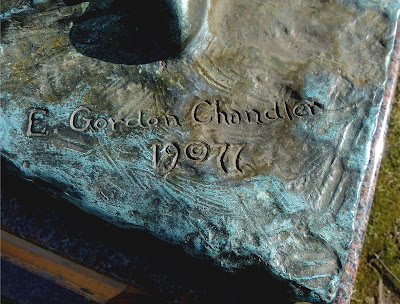 Anne (6 February 1665 – 1 August 1714) was Queen of England, Scotland, and Ireland between 8 March 1702 and 1 May 1707. On 1 May 1707, under the Acts of Union, the kingdoms of England and Scotland united as a single sovereign state known as Great Britain. She continued to reign as Queen of Great Britain and Ireland until her death in 1714. 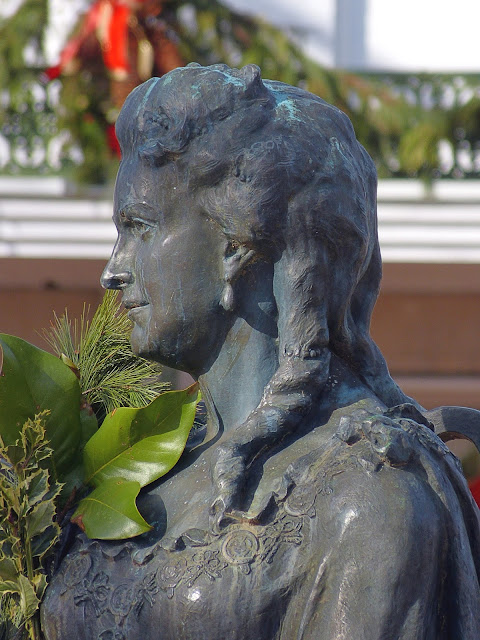 In 1706, Queen Anne's County was organized and named for the Queen of England. as this plaque indicates: 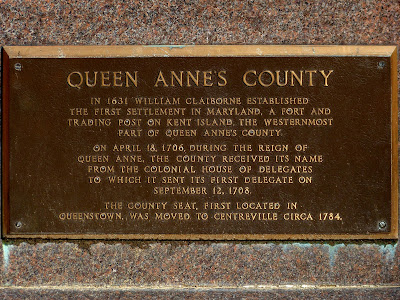 In 1631 William Claiborne established the first settlement in Maryland. A fort and trading post on Kent Island, the westernmost part of Queen Anne's County.

On April 18, 1706, during the reign of Queen Anne, the County received its name from the Colonial House of Delegates to which it sent its first delegate on September 12, 1708.

The county seat, first located in Queenstown, was moved to Centreville circa 1784.

Prince George's County Maryland had already been named for her husband Prince George of Denmark, Duke of Cumberland in 1696 when Princess Anne was heir to the throne. 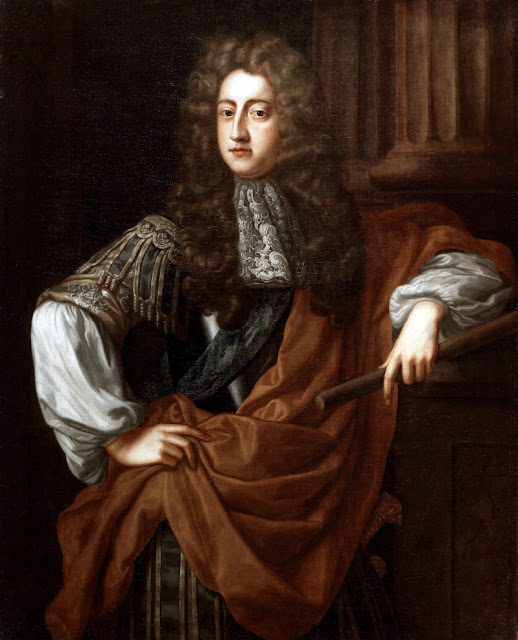 This 1702 painting of Queen Anne by Michael Dahl resides in the National Portrait Gallery of Great Britain. 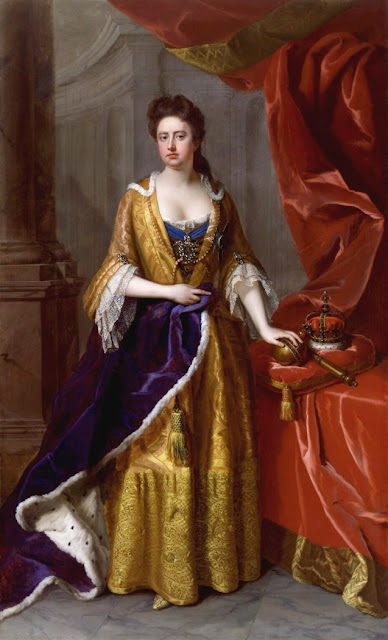 In 1977, Anne, Princess Royal (b. 1950) travelled to Centreville to dedicate the statue. Her visit is commemorated on another plaque on the base of the statue. 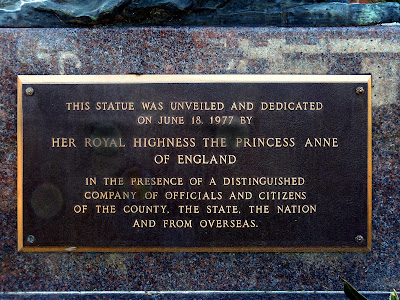 This statue was unveiled and dedicated on June 18, 1977 by Her Royal Highness Princess Anne of England, in the presence of a distinguished company of officials and citizens of the state, the nation and from overseas.

When I visited in 2012 it was decorated for Christmas. 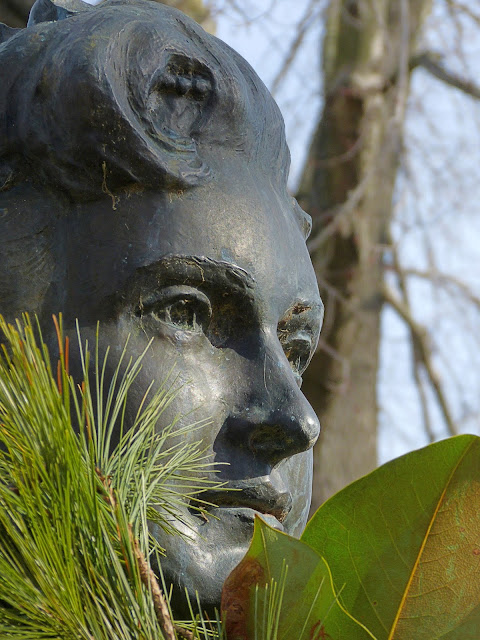 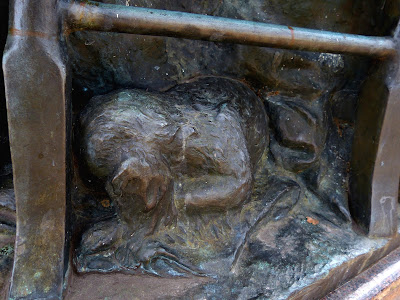 The small dog was inserted by the sculptor as an afterthought. It does not appear on the maquette  Chandler submitted to win the commission. Edward Papenfuse quotes her on this subject:

It was while I was working on the so-called "Lost Wax" cast of the piece at the foundry, that I decided something was needed to add more interest in the area under the back of the chair.  The graceful lines of the chair were not enough in the full size piece.  I added a Blenheim Spaniel puppy, curled up asleep on the folds of the Queen's robe under her chair.  The Blenheim Spaniel is a smaller version of the King Charles, bred by Marlborough especially as a ladies dog and named for his famous battle.  I felt it gave more interest to the back of the piece for people leaving the Courthouse or just walking around the statue.  There is no history of Queen Anne being partial to dogs -- E. Gordon Chandler quoted by Papenfuse, MD State Archives.

Sarah Churchill, Lady Marlborough, was the eponymous "Favourite" in the movie of that name and  King Charles after whom the breed was named was Anne's uncle, Charles II.
This 1685 painting of 18 year-old Anne, Princess of Denmark, belongs to the National Galleries of Scotland. It shows her with a Blenheim Spaniel. 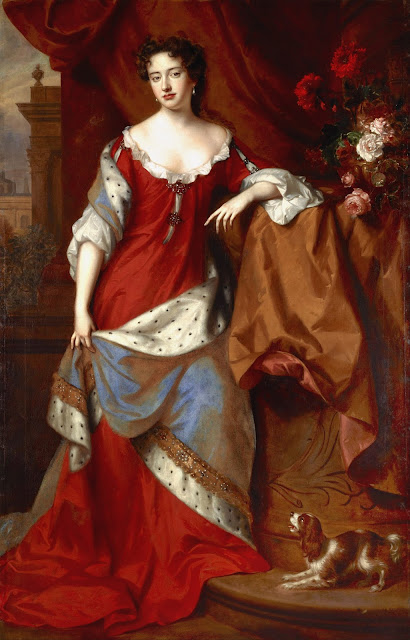 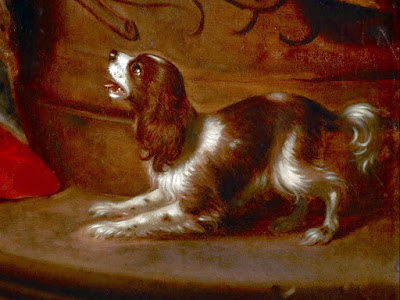 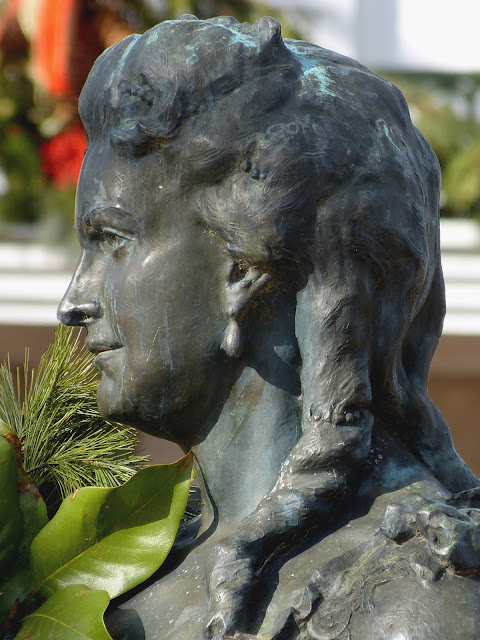 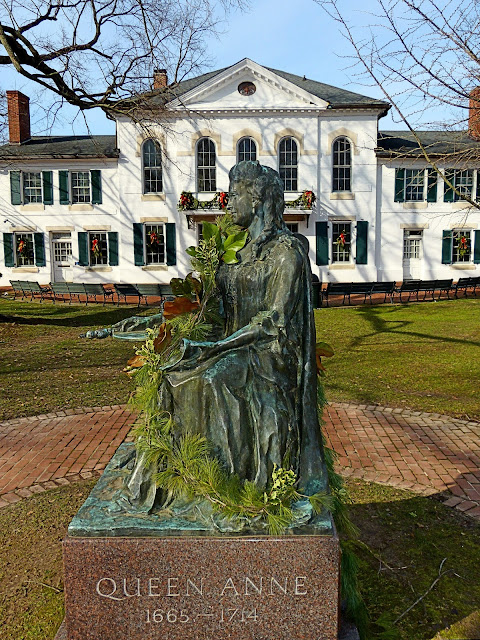 For more on the Courthouse and the town of Centreville see the Landmarks blog.
Posted by Allen Browne at 8:00 AM 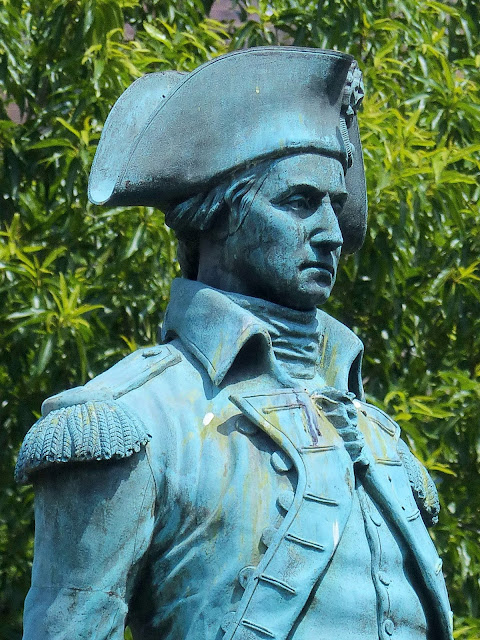