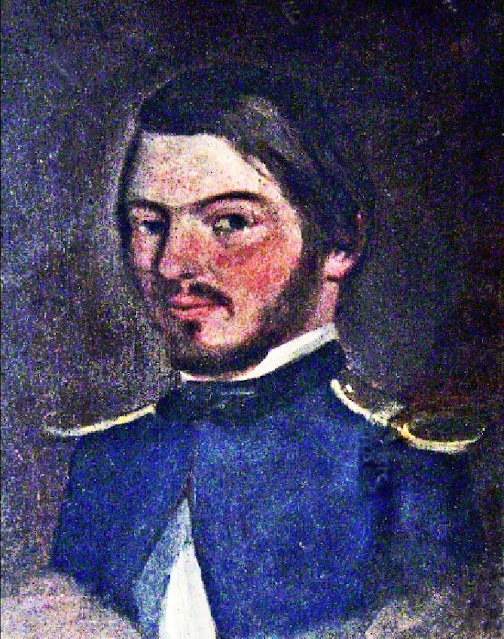 This portrait of George H. Derby, belonging to the Medford Historical Society is believed to be a self-portrait. It appeared in Cheryl O'Malley's short biography of Derby in the Society's Newsletter the Portal, in May of 2015.

Appleton's Encyclopedia give this biography of George Derby:

Derby, George Horatio, soldier, b. in Dedham, Mass., 3 April, 1823; d. in New York, 15 May, 1861. He was graduated at West Point in 1846, and made brevet 2d lieutenant of ordnance. He was transferred in 1846 to the corps of topographical engineers, and later in the same year served as assistant on the survey of New Bedford harbor, Mass. In the war with Mexico he served at the siege of Vera Cruz, was severely wounded in the battle of Cerro Gordo, and for gallant and meritorious conduct in that battle was brevetted 1st lieutenant. After his official duties as assistant in the topographical bureau in Washington, he conducted various surveys, 1847-'8, and also explorations in Minnesota territory, 1848-9, and in the Departments of the Pacific and Texas, 1849-'52. He had charge of the survey and improvements of San Diego harbor. California, 1853-'4, was on the staff of the commanding general of the Department of the Pacific, and of military roads in the same division in 1854-'6, and was coast surveyor and light-house engineer in 1856-'9. He rose to the rank of captain of engineers, and for two years was employed by the government in erecting light-houses on the Florida and Alabama coast. In the discharge of his duty in Florida he suffered a sunstroke, which affected his sight and caused softening of the brain, from which he died after his removal to New York. Under the pen-name "John Phoenix" he wrote a series of sketches and burlesques, which were published with the title of "Phoenixiana" (New York, 1855). He was also the author of "The Squibob Papers" (1859), under which name other of his articles were published after his death.

The Bancoft Library at U. C. Berkeley has this photo of George H.  Derby. 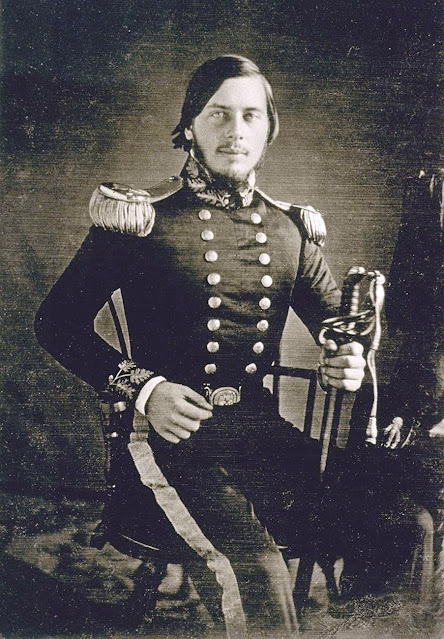 Although this sketch by W. H. W. Bicknell was the frontispiece of  Phœnixiana by Capt. George Horatio Derby ("John Phœnix"), Vol. 1. in 1897, 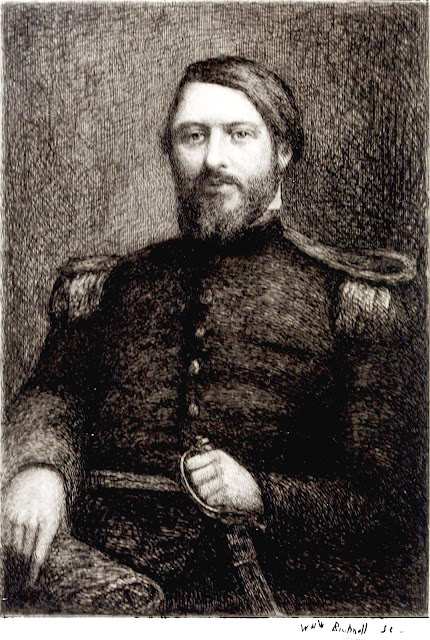 Derby's self portrait in the guise of John P. Squibob was used as the frontispiece of Phœnixiana by John Phœnix, in 1856. 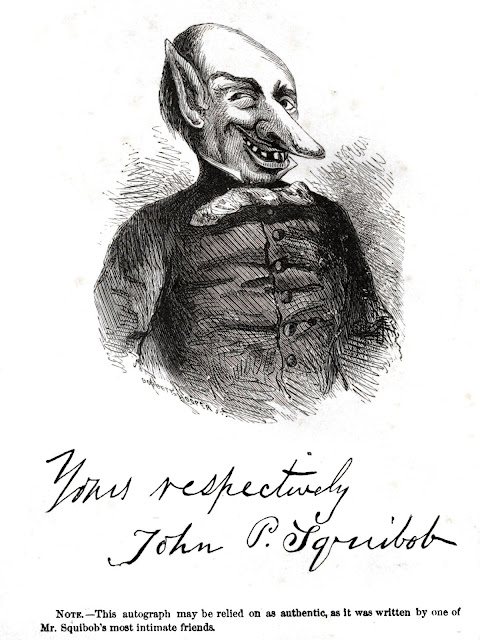 Note - This autograph may be relied on as authentic, as it was written by one of Mr. Squibob's most intimate friends.

And, the same image appeared on the cover of the 1881 edition. 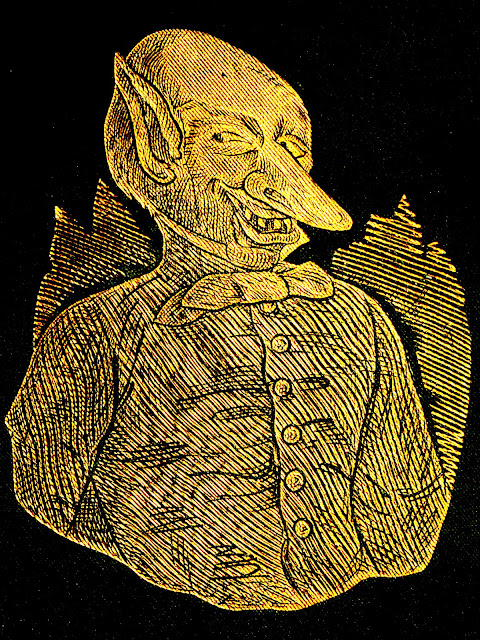 E. W. Kemble gave this, rather different interpretation of John P. Squibob as the frontispiece in 1903. 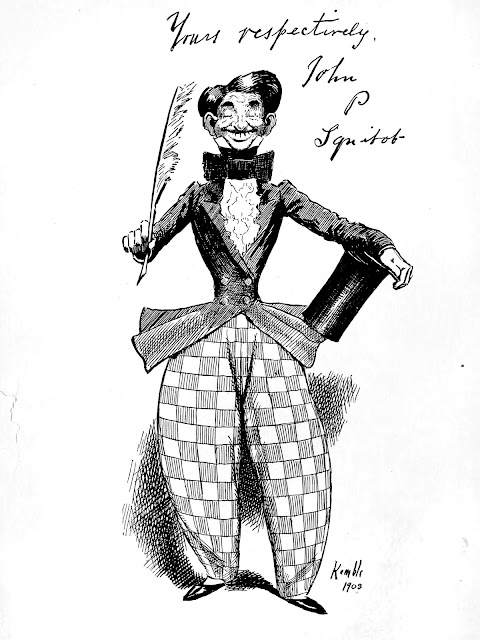 Yours Respectively, John P. Squibob.
In a sort on anticipation of Rube Goldberg, Derby, er, Phoenix, in the Squibob Papers, invented this devise to power a sewing machine. 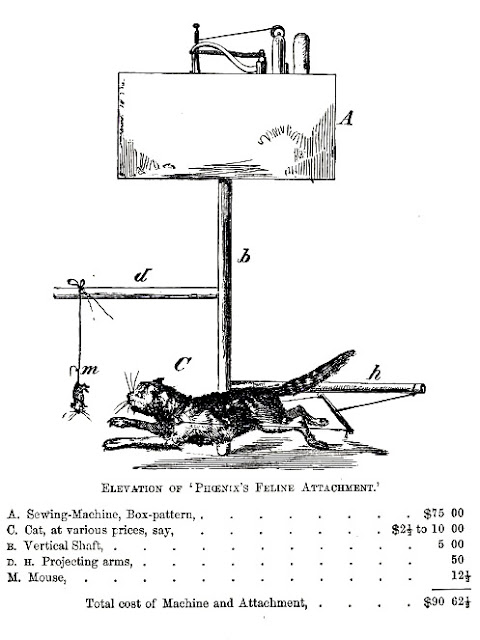 Phoenix's Feline Attachment
Perhaps more famously Derby invented a plate and hook attachment for the US Army uniform which he used to make fun of Secretary of War Jefferson Davis.  Benjamin Perley Poore published Derby's sketches of the device in his 1886 Reminiscences, and recorded Davis' reaction. (Which see.) 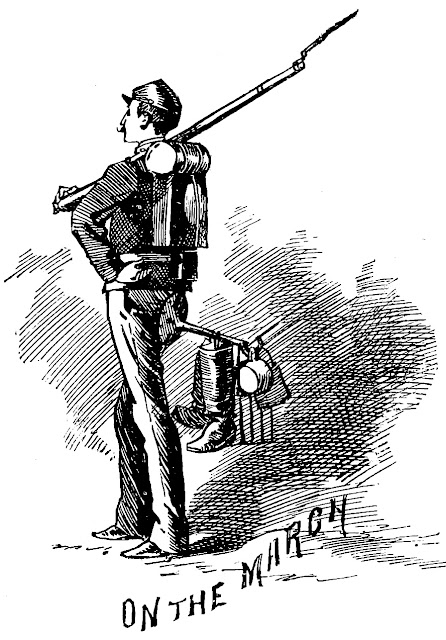 Derby's Plate and Hook Attachment: On the March.
The Bancoft Library also has this 1850's portrait by H.M. Rufalin of Lt. George H. Derby with San Francisco bay in the background. 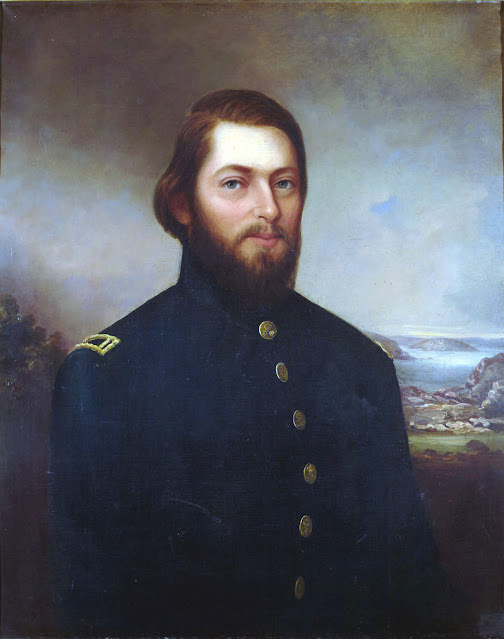