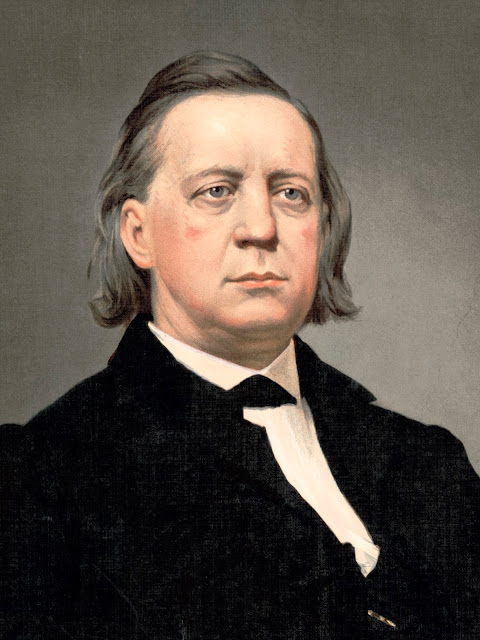 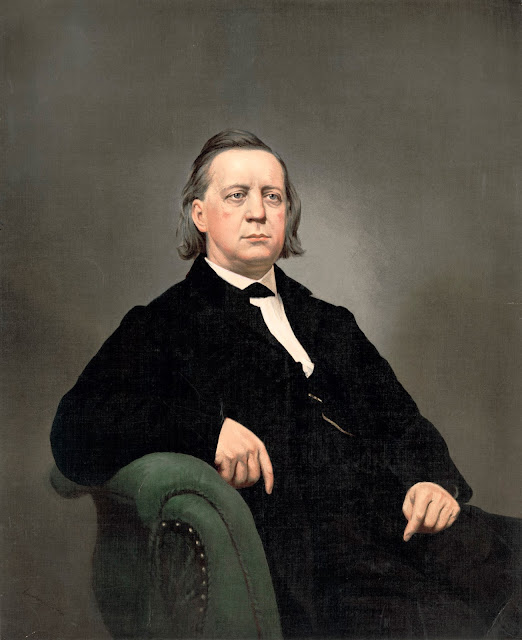 A photo of this chromolithograph of Henry Ward Beecher belongs to the Library of Congress.

Henry Ward Beecher (June 24, 1813 – March 8, 1887) was an American Congregationalist clergyman, social reformer, and speaker, known for his support of the abolition of slavery, his emphasis on God's love, and his 1875 adultery trial… His rhetorical focus on Christ's love has influenced mainstream Christianity to this day.

This chromo and its companion represent Beecher around 1871, about the time of the adultery trial mentioned above. 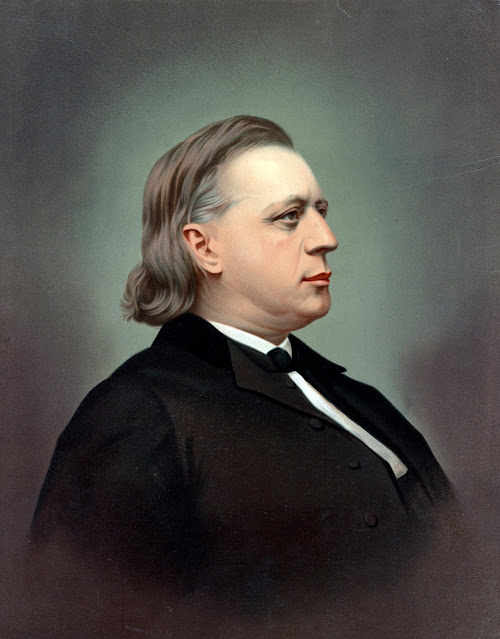 By this time he had become  the renowned preacher at Plymouth Congressional Church where he had presided since 1848. He had given his name to the "Beecher's Bibles" (Sharps Rifles) used in Bleeding Kansas.  (Illustration below from Memorial of Henry Ward Beecher, 1887.) 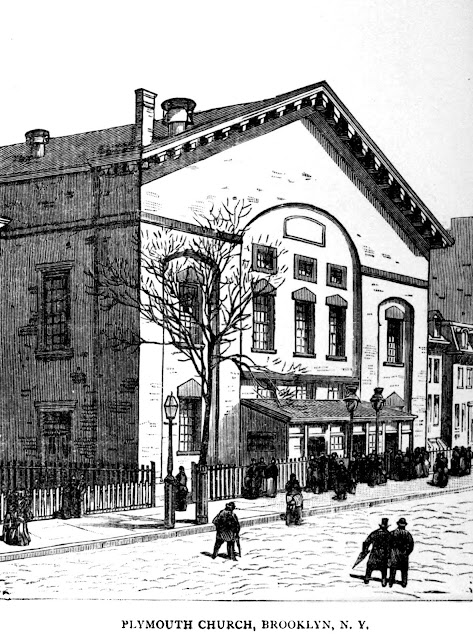 Henry Beecher was perhaps “The Most Famous Man in America”, as the title of Debby Applegate's 2007 biography has it. But this is a little misleading, in that he was certainly less famous than his sister Harriet Beecher Stowe. Henry was one of an extraordinary generation of Beechers. His father was Presbyterian minister Lyman Beecher. 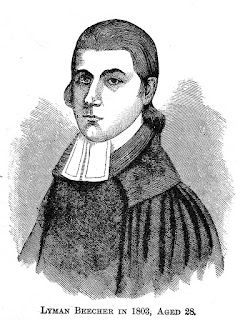 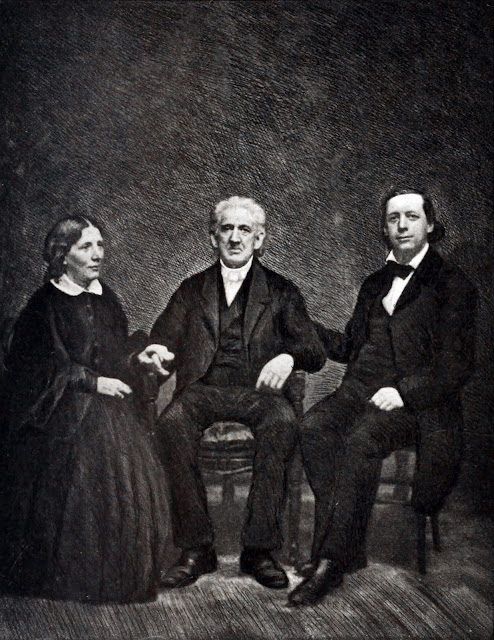 Henry's sister Isabella Beecher Hooker was a spiritualist and suffragist. 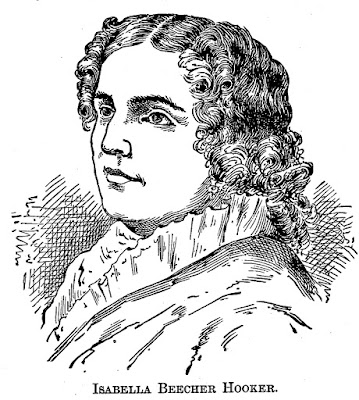 Henry's brother James C. Beecher was a missionary to China at the beginning of the Civil War.  He helped recruit and became Lt. Colonel of the 1st North Carolina Colored Regiment, which became the 35th Regiment U.S. Colored Infantry. 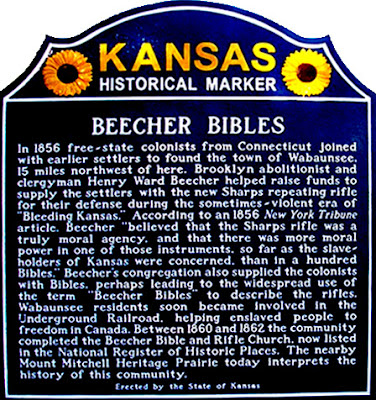 1856 free-state colonists from Connecticut joined with earlier settlers to found the town of Wabaunsee, 15 miles northwest of here. Brooklyn abolitionist and clergyman Henry Ward Beecher helped raise funds to supply the settlers with the new Sharps repeating rifle for their defense during the sometimes-violent era of “Bleeding Kansas.” According to an 1856 New York Tribune article, Beecher “believed that the Sharps rifle was a truly moral agency, and that there was more moral power in one of those instruments, so far as the slaveholders of Kansas were concerned, than in a hundred Bibles.” Beecher's congregation also supplied the colonists with Bibles, perhaps leading to the widespread use of the term “Beecher Bibles” to describe the rifles. Wabaunsee residents soon became involved in the Underground Railroad, helping enslaved people to freedom in Canada. Between 1860 and 1862 the community completed the Beecher Bible and Rifle Church, now listed in the National Register of Historic Places. The nearby Mount Mitchell Heritage Prairie today interprets the history of this community. 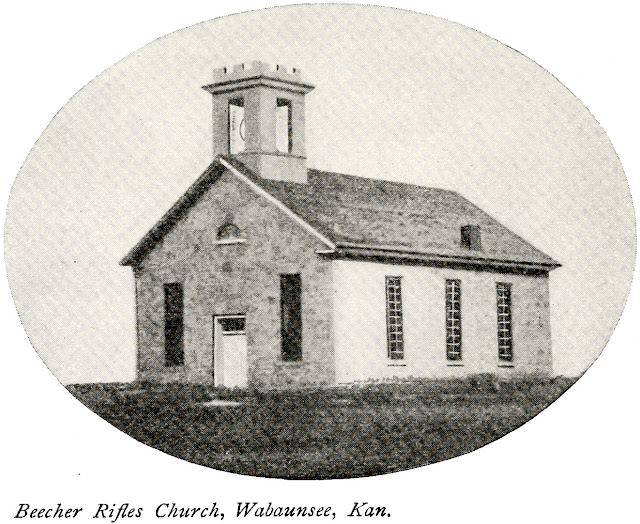 Beecher Rifles Church, Wabaunsee, Kan.
(From Henry Ward Beecher as his Friends Saw Him, 1904)
Beecher displayed  his knack for showmanship when, as an active abolitionist, he staged ‘Slave Auctions’ in his church in which he imitated an auctioneer and took bids to free a slave child. 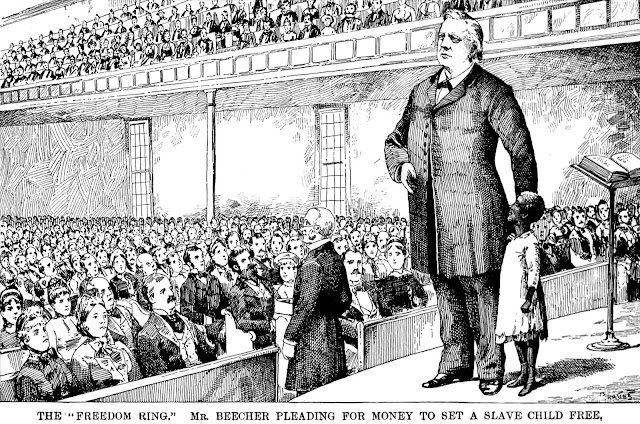 "Pinky" was a light-skinned 9-year old enslaved girl for whom Beecher solicited funds. 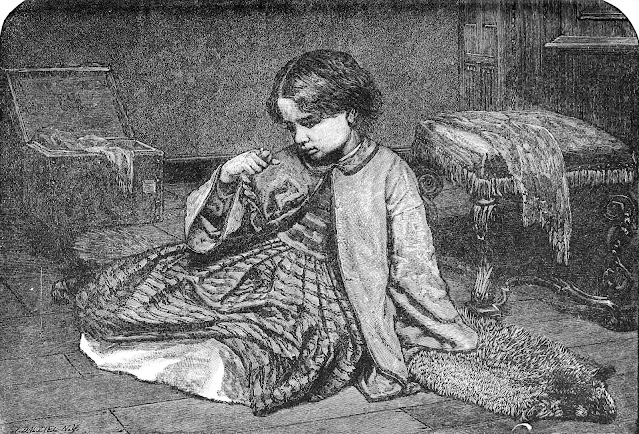 The famous Reverend Henry Ward Beecher gave a sermon on February 5, 1860, during which he impersonated a slave auctioneer and asked the congregation of Plymouth Church for offerings. His dramatic and emotional speech roused the audience, and people tossed money and jewelry into the collection plates. $900 was raised to buy freedom for a young slave girl known as "Pinky" (Sally Maria Diggs). At the end of the "auction" Mr. Beecher picked up a ring from the collection plate, a large fire opal, and placed the ring on Pinky's hand, saying "With this ring I do wed thee to freedom." The painter Eastman Johnson painted this portrait after seeing Pinky sitting on the ground looking at her "Freedom Ring." (Brooklyn Daily Eagle, March 21, 1934, p. 1) -- Brooklyn Public Library

Henry was nearly 17 when he met Eunice White Bullard, at Amherst College. (See The Washington Bee, Oct. 10, 1891.) They were married in 1837 after a 5 year engagement.  Illustrations below come from  A Biography of Rev. Henry Ward Beecher by William Constantine Beecher, et. al. 1888.) 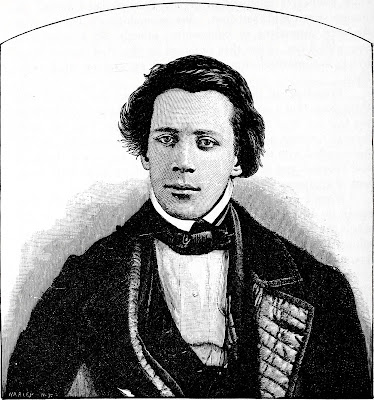 Henry Ward Beecher at the time of his marriage. 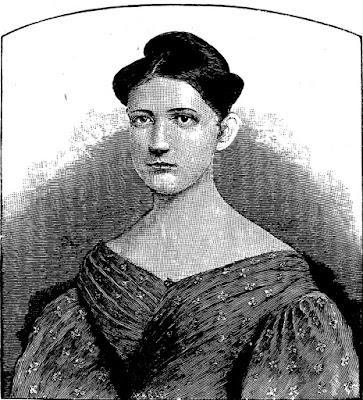 Eunice White Bullard at the time of her marriage.
Their marriage was not a happy one. Applegate says that “Eunice developed a poisonous jealousy of his time away from home, which festered until it became, in her mind, the central conflict of her marriage. Within a year of their wedding they embarked on the classic marital cycle of neglect and nagging.”
Henry's sexual indiscretion became notorious in the following years. Lucia Maria Bowen wife of his editor Henry Bowen admitted, to her husband, an affair with Henry Ward Beecher on her death bed in 1863. It became a running joke that “Beecher preaches to seven or eight of his mistresses every Sunday.”
Henry Beecher had the poor sense to denounce Victoria Woodhull for advocating “Free Love.” In 1870, Elizabeth the wife of Henry's friend Theodore Tilton confessed to her husband an affair with Beecher. 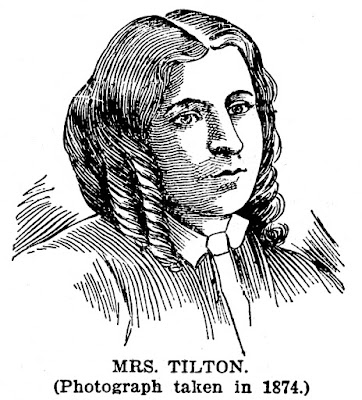 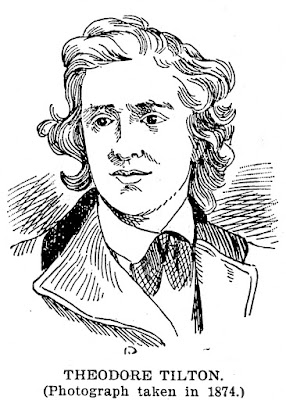 Woodhull was incensed that Henry Beecher would condemn her for advocating Free Love while practicing it himself. 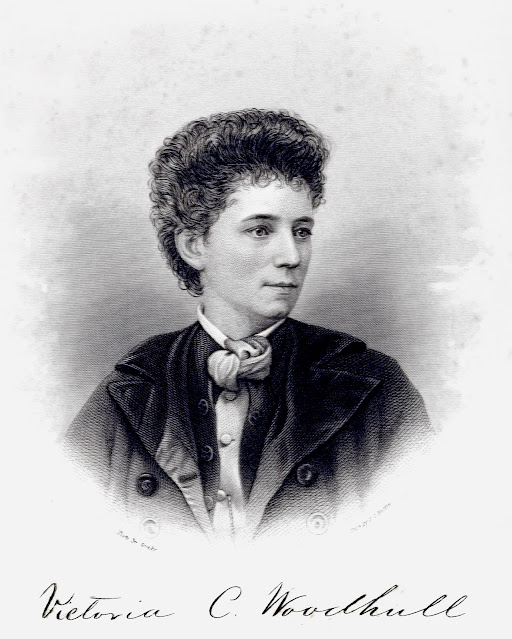 Victoria C. Woodhull
She published an article entitled “The Beecher-Tilton Scandal Case” in Woodhull and Claflin's Weekly on November 2, 1872. This exposé was so explicit that Woodhull was arrested for mailing obscene material, but she got off on a technicality. 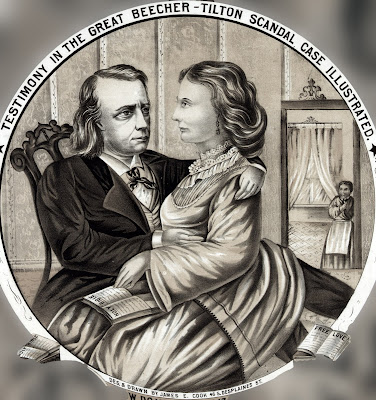 In 1875, Theodore Tilton sued Henry Beecher for “criminal conversation,” the quaint legalism for adultery.  The sensational trial ran from January to July of 1875 and ended with a hung jury, split nine to three in favor of Beecher. The scandal also split the Beecher family with Harriet supporting Henry while Isabelle supported her friend Victoria Woodhull.  By the time it was over, Theodore Tilton had been rejected by the Plymouth Church and Beecher had been exonerated.
Len Barcousky says that Beecher’s “reputation was singed, but he continued to write, preach and to dabble in politics until his death in March 1887.” (The Pittsburg Post-Gazette, June 25, 2006.) He remained a celebrity much in demand for his writing and public oratory, and he advertised soap: 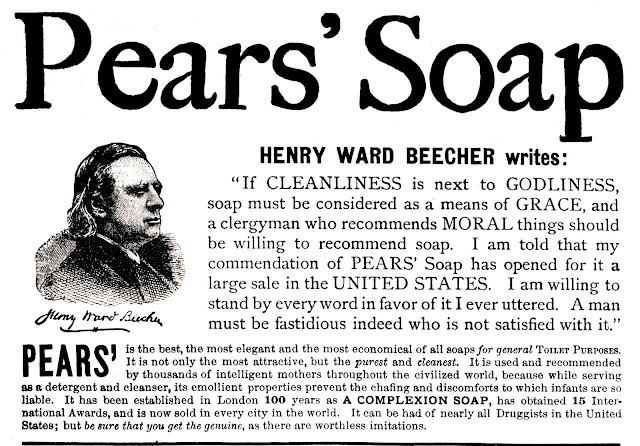 Henry Ward Beecher writes:
If CLEANLINESS is next to GODLINESS, soap must be considered as a means of GRACE, and a clergyman who recommends MORAL things should be willing to recommend soap. I am told that my commendation of PEARS' Soap has opened for it a large sale in the UNITED STATES. I am willing to stand by every word in favor of it I ever uttered. A man must be fastidious indeed who is not satisfied with it.

Henry's marriage to Eunice remained intact, in spite of the scandal. 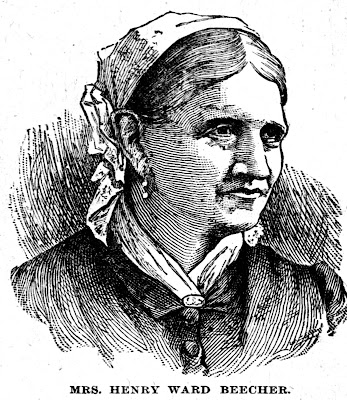 In 1878 he was appointed chaplain of the 13th Regiment of New York National Guards. 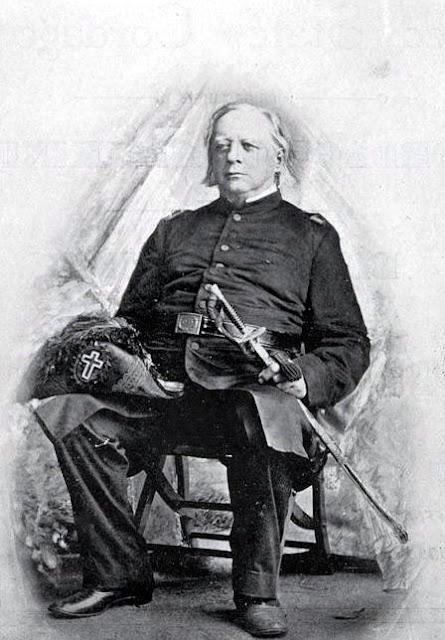 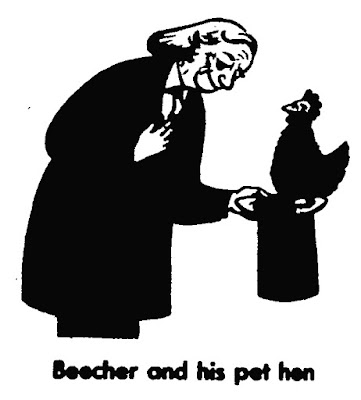 The Reverend Henry Ward Beecher
Called a hen “a most elegant creature.”
The hen, pleased with that.
Laid two eggs in his hat,
And thus did the hen reward Beecher.
Henry Ward Beecher had a stroke on March 6, 1887 and died on March 8. 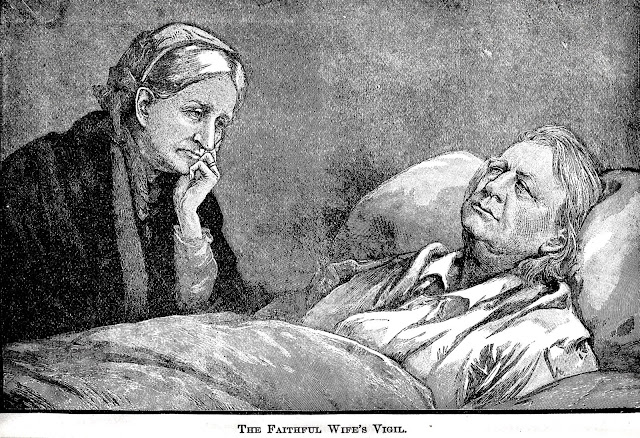 The Faithful Wife's Vigil
He was widely eulogized. This obit appeared in the Bridgeton N.J. Pioneer, March 10, 1887 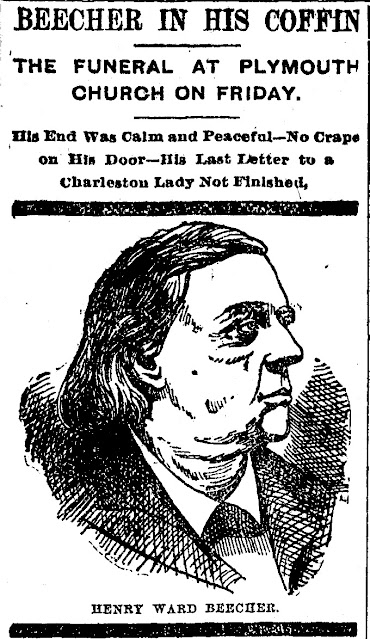 Beecher in His Coffin
Eunice Beecher died ten years after  Henry, to the day. This obituary appeared in The Bottineau Courant. (Bottineau, N.D.), March 13, 1897. 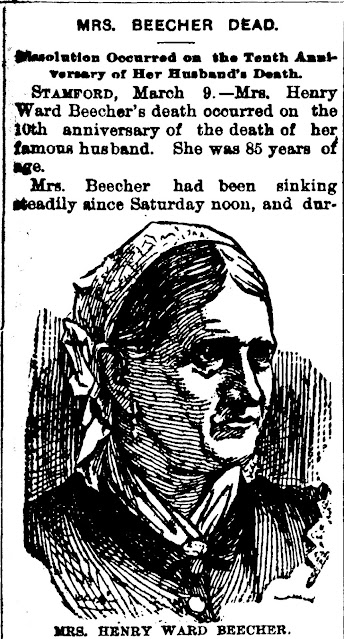 Mrs. Beecher Dead
Henry and Eunice are buried in Greenwood Cemetery in Brooklyn. (Photo below from Henry Ward Beecher, As His Friends Saw Him, © 1904 by J. H. Tewkbury.) 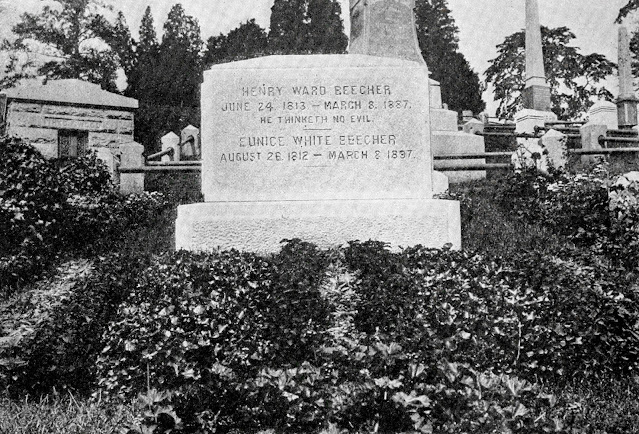