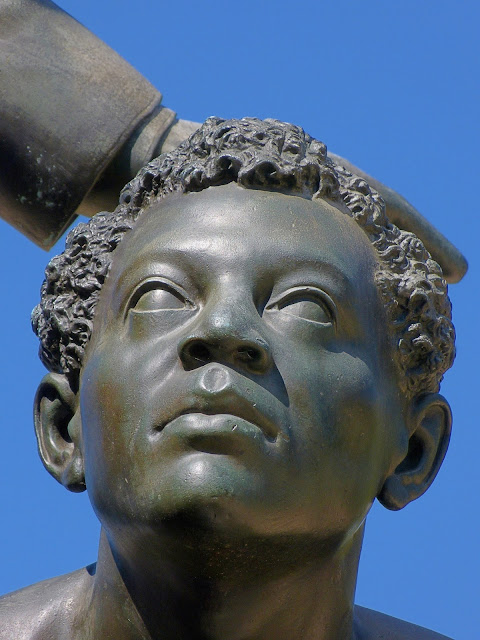 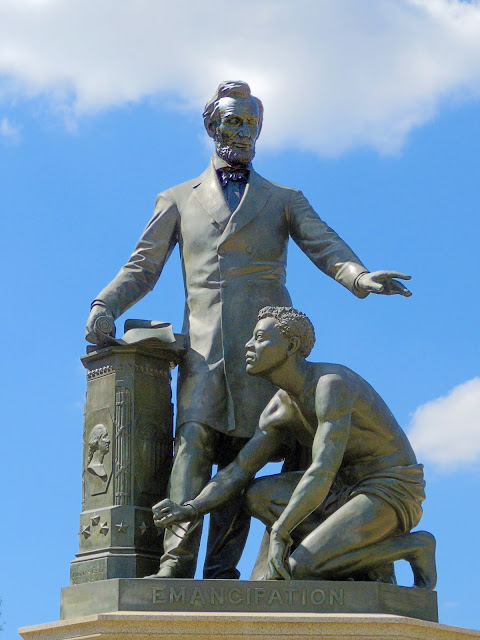 The Biographical Dictionary of  America, 1906, identifies Alexander as a hero, describing how he informed Federal troops of an attempt by confederate sympathizers, who included his master,  to sabotage a railroad bridge in 1861 and later came to be the model for  the freedman in Ball's sculpture group.

ALEXANDER, Archer, hero, was born near Richmond, Va., about 1810, a slave, and in 1831 was taken to Missouri by his master. In 1861, at the breaking out of the civil war, he performed a very heroic deed. Learning that a detachment of Federal troops was to pass over a railroad bridge, the timbers of which he knew to have been cut in order to wreck the train, Alexander, at the hazard of his life, gave the information to a prominent Union man, thus preventing disaster to the detachment. He was suspected of doing this, and was taken prisoner by a committee of Confederate sympathizers, but escaped, fleeing to St. Louis, where he obtained employment under protection of the Federal Provost-marshal. In the bronze group, "Freedom's Memorial," in the capitol grounds in Washington, he was the model of Thomas Ball the sculptor, from which "The Freedman " in the group was made. See "The Story of Archer Alexander." He died in St. Louis. Dec. 8. 1879. 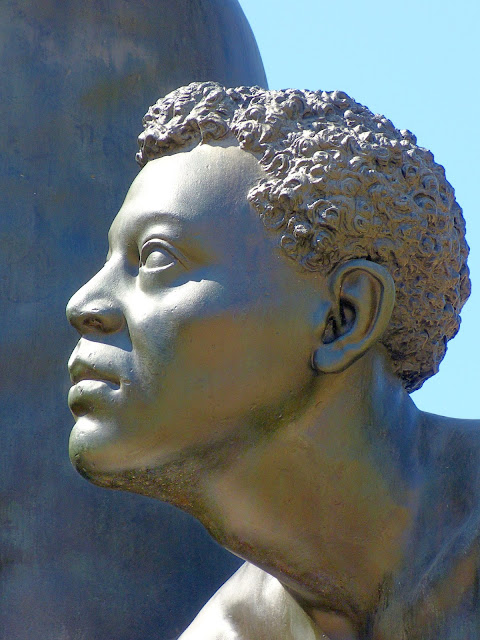 In 1863, Alexander came under the protection of the Provost Marshal, after reporting a stash of guns owned by Confederate sympathizers.  Missouri, a union state, was still a slave state at that time as the emancipation proclamation applied only to states in rebellion. But slaves of rebel masters could be freed if their masters came within Federal lines. Alexander hired himself to Rev. William Greenleaf Eliot who made efforts to buy Alexander's freedom. Eliot would later, in 1885,  write a biography of  Archer Alexander. In the later months of 1863 Alexander was captured by slave-catchers and jailed in spite of the Provost's protective order. Alexander was soon rescued and the Prevost's order extended to include his wife Louisa and his children. Thus he became the last Missourian captured under the Fugitive Slave Act.   He was ultimately emancipated in 1865 when slavery was abolished in Missouri.

I turns out that Archer Alexander was a great-great-great grandfather of boxer and activist Mohammed  Ali, (Cassius Clay). (See The Washington Post, October 2, 2018.) 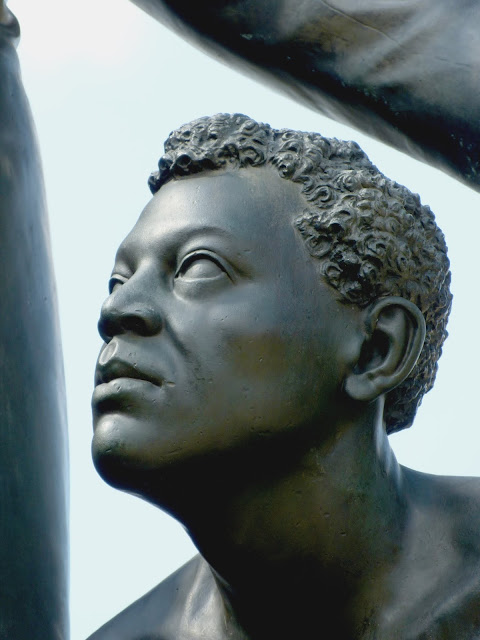 In 1870 or 71 Eliot had photos of Archer taken by St. Louis photographers Sholten Studios and sent them to Thomas Ball in Florence, Italy. This c. 1870 photo of  Archer Alexander belongs to the Missouri History Museum, they attribute  it to an unknown photographer "after J.A. Scholten." 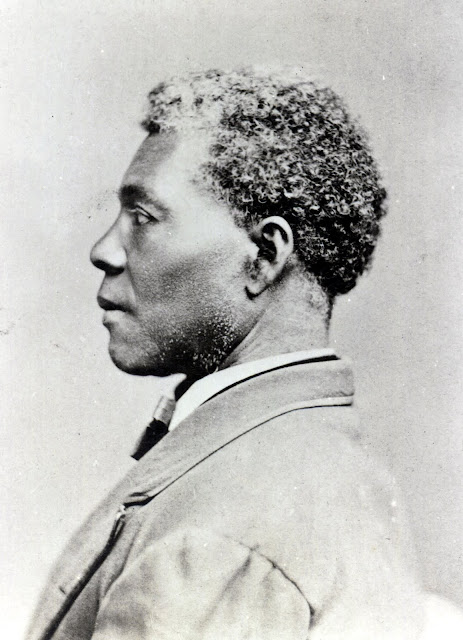 Ball was then working on a statuary group representing Lincoln and a freed slave, commemorating the Emancipation Proclamation. He used Archer Alexander's likeness for the face of the freedman.  There are various instances of the this group in museums around the US.  This one is the Chazen Museum in Madison Wisconsin. 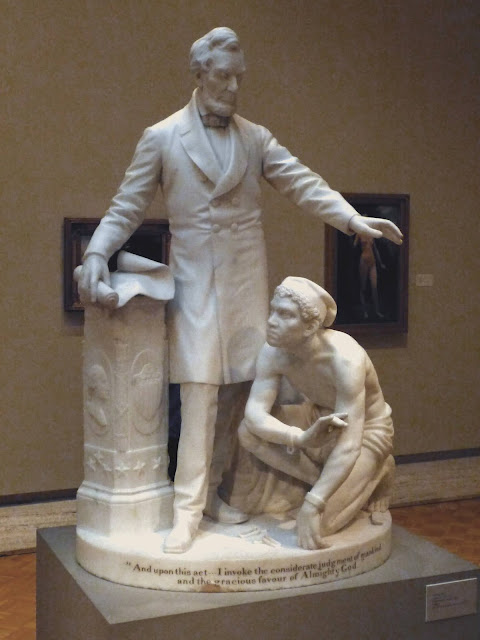 "And upon this act -- I invoke the considerate judgement of mankind and the gracious favour of Almighty God." 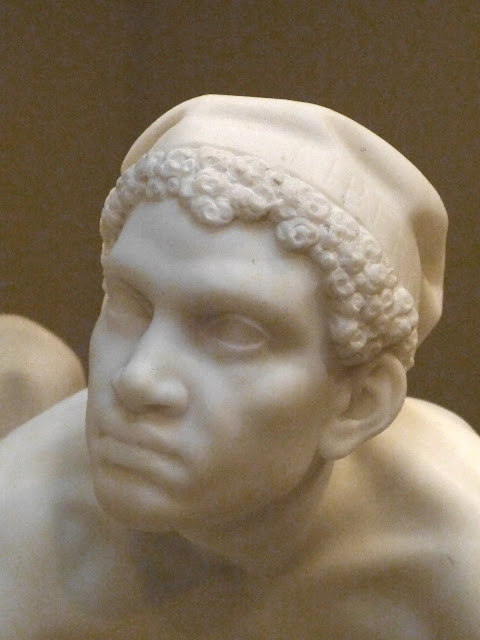 In 1876, a version of this group would unveiled atop "Freedom's Memorial" in Lincoln Park. 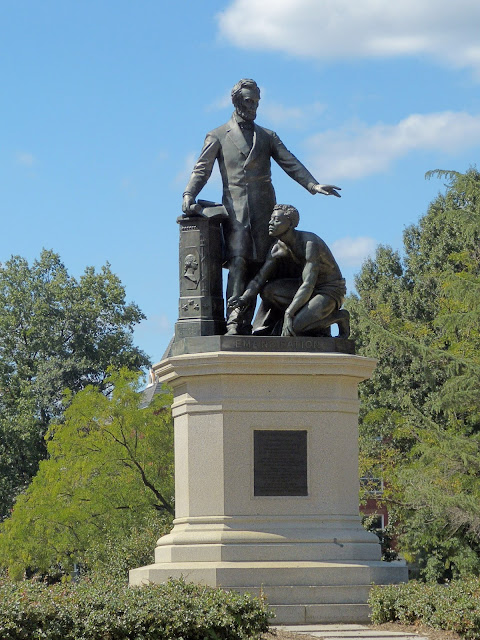 The $18,000 monument was placed by the Western Sanitary Commission and financed entirely by funds donated by emancipated African Americans. Of course the monument is not intended to commemorate Archer Alexander but to celebrated Abraham Lincoln, who dominates the group. 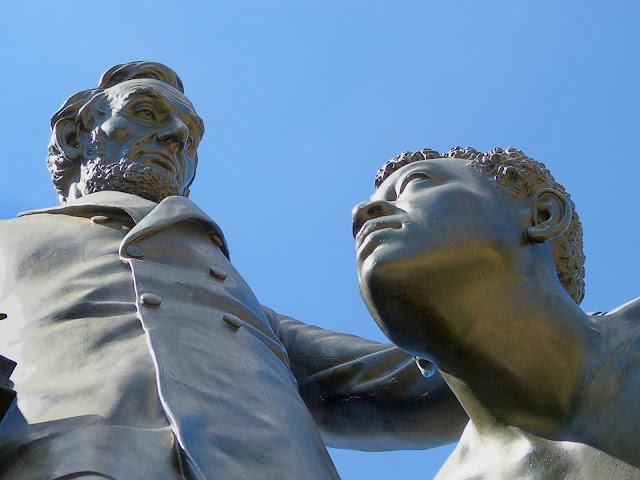 The plaque commemorates Lincoln but tells the story of Charlotte Scott who is credited with starting the movement to have the monument erected. 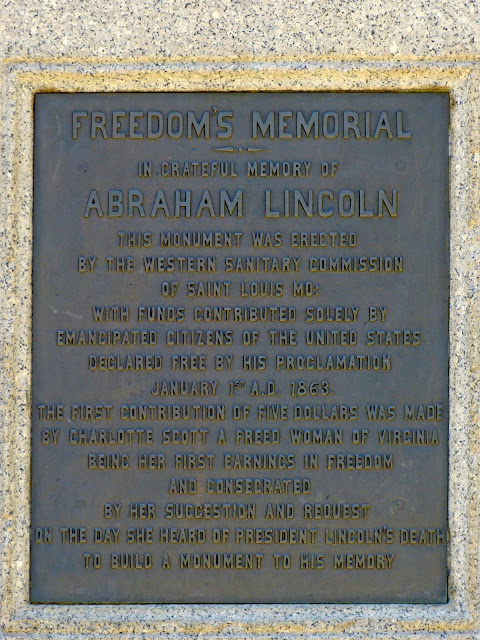 Freedom's Memorial
-.-
In Grateful Memory of
Abraham Lincoln
This Monument was Erected
By the Western Sanitary Commission
of Saint Louis Mo;
with Funds Contributed Solely by
Emancipated Citizens of the United States
Declared Free by His Proclamation
January 1st A.D. 1863.
The First Contribution of Five Dollars was Made
By Charlotte Scott a Freed Woman of Virginia
Being her first earnings in Freedom
and Consecrated
By Her Suggestion and Request
on the Day She Heard of President Lincoln's Death
To Build a Monument in His Memory. 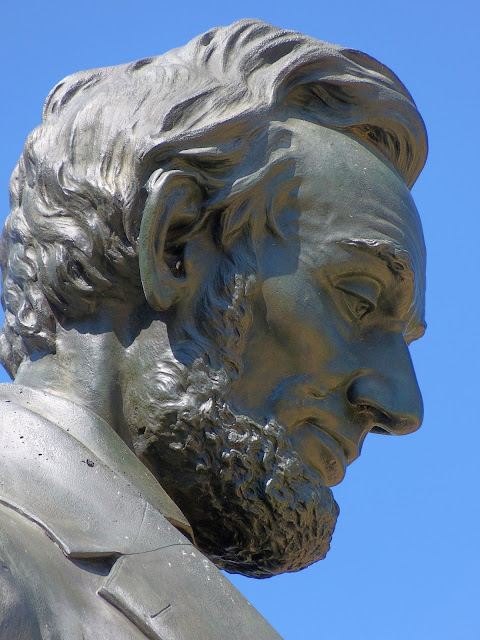 The monument originally faced East toward the Capitol, but when the Mary Mcleod Bethune monument was put up in 1974 "Freedom's Monument" was turned around to face West. 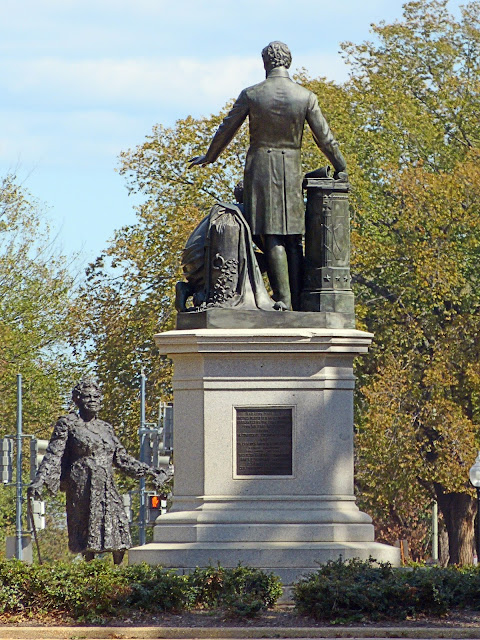 The East Face of "Freedom's Monument" and Mary McLeod Bethune.
The plaque on the West face continues to quote from the Emancipation Proclamation: 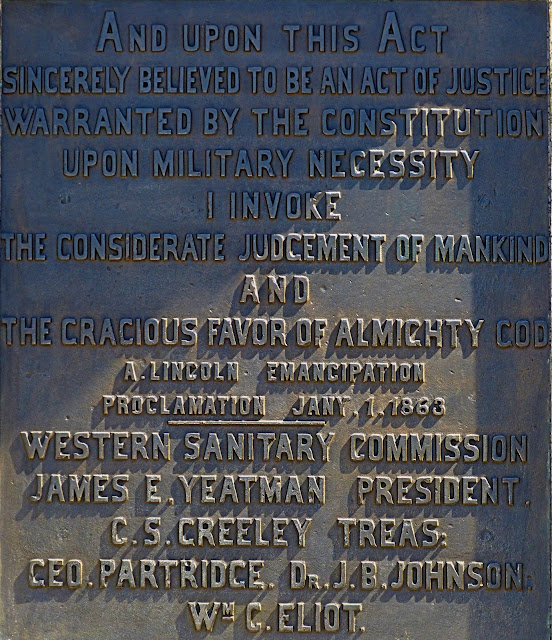 And Upon this Act
Sincerely Believed to be an Act of Justice
Warranted by the Constitution
Upon Military Necessity
I Invoke
The Considerate Judgement of Mankind
And
The Gracious Favor of Almighty God.
A. Lincoln - Emancipation
Proclamation Jany, 1. 1863
____
Western Sanitary Commision
James E. Yeatman President.
C. S. Creeley Treas:
Geo. Partridge. D.r J. B. Johnson
Wm. G. Eliot
The Freedman is shown still wearing the recently broken chains of Slavery. 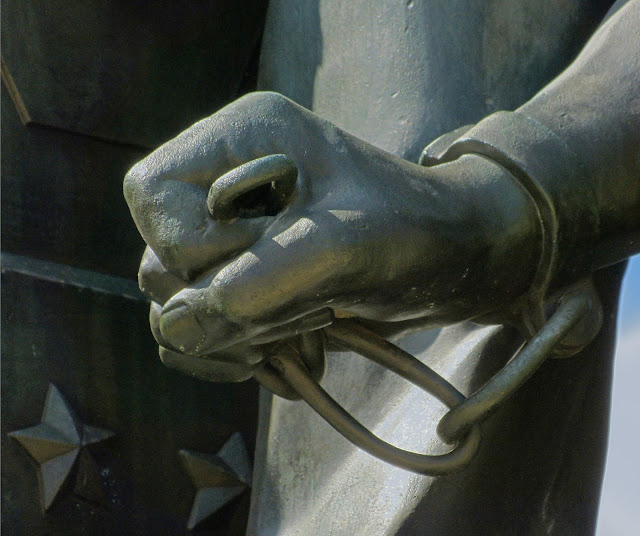 A rose-vine twines around the whipping post to show that it has fallen into disuse. 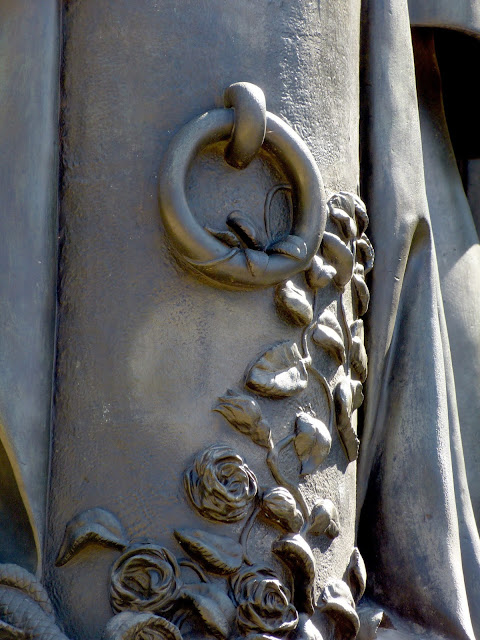 When the memorial was dedicated, Lincoln Park was on the edge of the City, with open fields stretching to the east. Ben: Perley Poore included this image of the memorial in his 1887 Reminiscences. 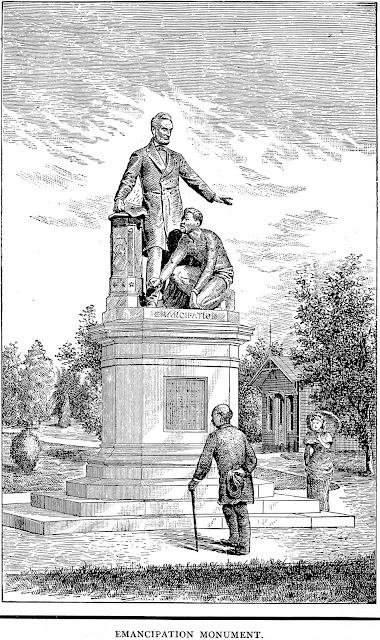 Dignitaries at the dedication included President Grant, members of the cabinet, Supreme Court justices, foreign ministers, Senators and Representatives as well as John Mercer Langston, Frederick Douglass, and, of course, Charlotte Scott. Douglass gave what Blight calls "one the greatest speeches of his life." Douglass not only discussed the complex question of Lincoln's contribution to emancipation but warned that reconstruction was failing in 1876.
The image of an upright authoritative Lincoln standing over a naked kneeling slave sparks controversy in our day, but had been questioned even in 1876. Within days of delivering that dedication speech, Frederick Douglass  wrote this letter to the Washington National Republican. 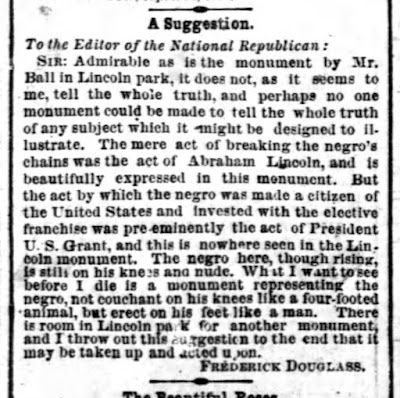 A Suggestion
To the Editor of the National Republican:
Sir: Admirable as is the monument by Mr. Ball in Lincoln park,  it does not, as it seems to me, tell the whole truth, and perhaps no one monument could be made to tell the whole truth of any subject which it might be designed to illustrate. The mere act of breaking the negro's chains was the act of Abraham Lincoln, and is beautifully expressed in this monument. But the act by which the negro was made a citizen of the United States and invested with the elective franchise was pre-eminently the act of President U.S. Grant, and this is nowhere seen in the Lincoln monument. The negro here, though rising, is still on his knees and nude. What I want to see before I die is a monument representing the negro, not couchant on his knees like a four-footed animal, but erect on his feet like a man. There is room in Lincoln park for another monument and I throw out this suggestion to the end that it may be taken up and acted upon.
Frederick Douglass 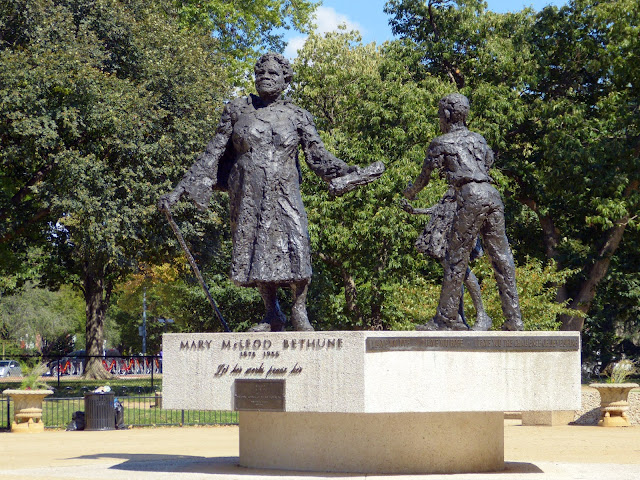 Perhaps Douglas would have seen the 1974 Statue of Mary McLeod Bethune by Robert Berks at the east end of the park as the fulfillment of his wish for a statue depicting an African American "erect and on his feet like a man".