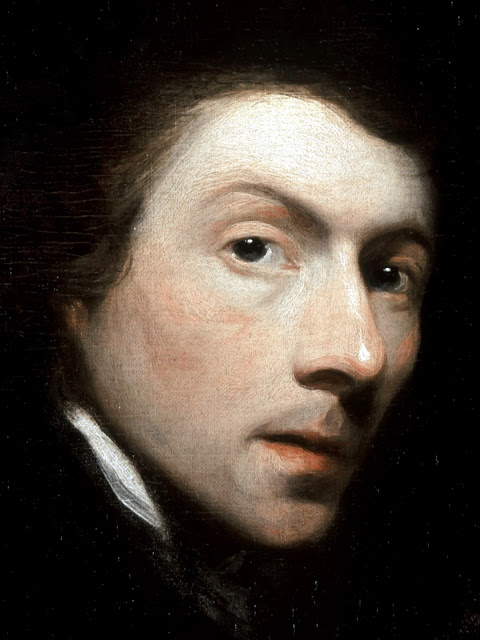 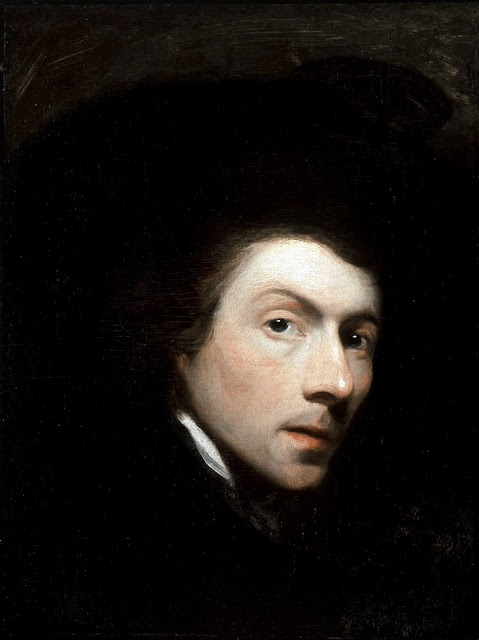 This 1778 self-portrait  by Gilbert Stuart at the age of 24 belongs to the Redwood Library & Athenaeum in Newport, Rhode Island. (This image was cribbed from Wikipedia.)  The National Gallery of Art introduces Stuart this way:

Gilbert Stuart (1755-1828) created the most lasting images of George Washington, and he also invented definitive images of the next four American presidents. This legacy alone would be enough to secure Stuart's lasting fame. However, his contribution to American portraiture extends well beyond painting the political leaders of the new republic. Stuart's subjects include prominent and lesser-known figures in both the Old and New Worlds. In addition, he introduced a new level of sophistication to the American portrait, achieving convincing likenesses and successful representations of character through his choice of pose and expression.
Like a number of early American painters, Stuart learned his trade in Great Britain. He was a sociable, loquacious fellow who delighted, exasperated, and at times offended his patrons. This complex man lived a life filled with contradictions. Although he was a prolific painter, he took years to complete some portraits and left scores unfinished, failing to deliver them at all. Despite being in demand, he often found himself in debt the was a poor manager of money who enjoyed luxury and the good life. Yet Stuart's unmatched ability to capture likeness more than compensated for his erratic behavior and earned him a devoted following. He was the most sought-after American portraitist of his era and today is counted among the greatest early American artists.

George C. Mason gives this description of the 1778 self-portrait:

This is the artist's portrait, painted by himself. He has on a Rubens hat. The picture is now in the Redwood Library, to which institution it was presented by Mrs. Dr. Waterhouse. It is very inferior to Stuart's later works, and has evidently been injured by the application of bad varnish. On the back there is written, in Stuart's hand: “G. Stuart, Victor Se Ipso Pinxit. A. D. 1778. Aetatis Suae 24.”

The Tate Gallery in London has this c.1782–9 “Portrait of a Man” by Gilbert Stuart that may also be a self-portrait. 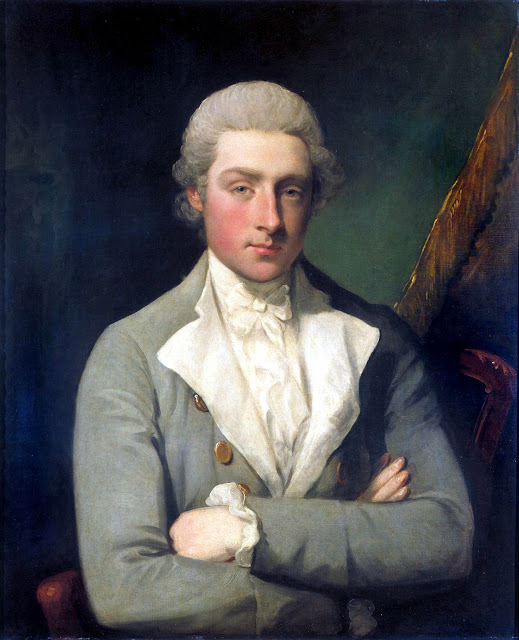 At the time he painted this self-portrait, the American artist Gilbert Stuart was based in London and was a rising star in the art world.

This slickly executed image, with its crisp design and clear, subtle colours, advertises the painter’s technical sophistication. He took these skills back to America in 1793, where he established himself as a prolific and successful portrait painter. His most famous portrait is the one of Washington reproduced on the American dollar bill.

In 1825, Stuart's Student Sarah Goodridge painted this miniature portrait of him. It belongs to the National Portrait Gallery in Washington, DC. 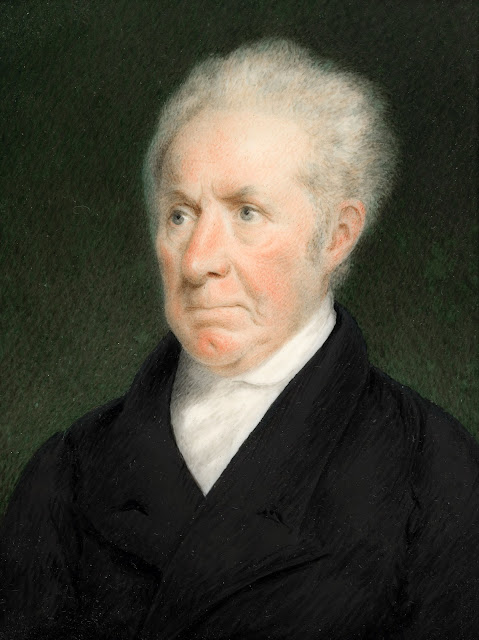 Born Kingston (formerly North Kingstown), Rhode Island, Sarah Goodridge, a New England miniaturist who took informal instruction from Gilbert Stuart in the early 1820s, painted this miniature at Stuart’s request around 1825. He was then the most famous artist in Boston, and Goodridge was taken with his formidable personality and craggy features. As Stuart’s daughter recorded, “[Goodridge] seemed to be quite overcome at the idea. . . . [The miniature] is the most life-like of anything ever painted of him.” Goodridge made at least three nearly identical miniatures, and the image was engraved.

Harpers' Encyclopædia has this engraving after Goodridge's miniature: 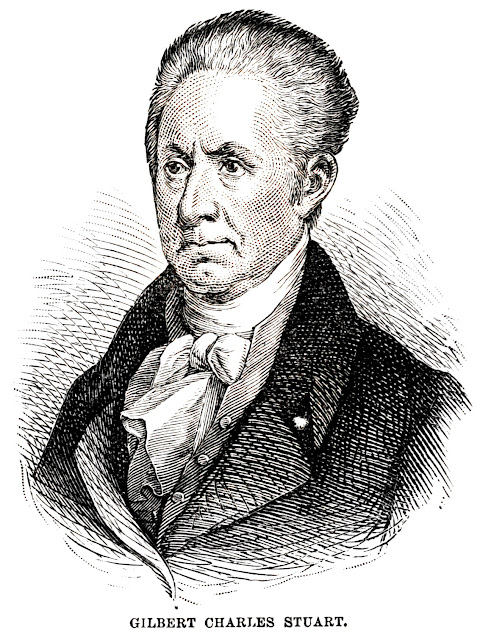 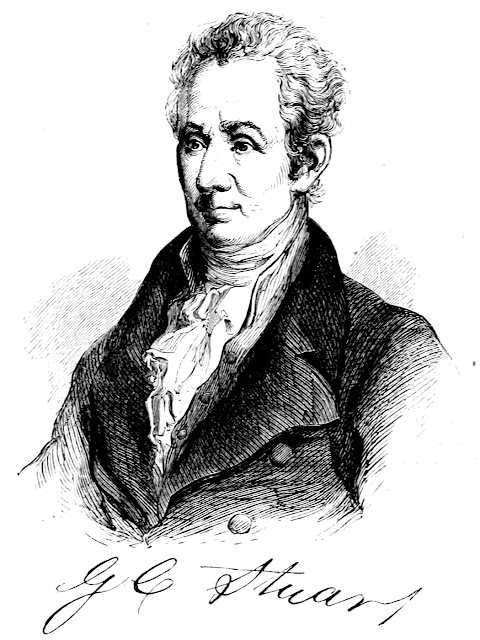 Appletons' Cyclopedia of American Biography gives us this picture of Stuart: 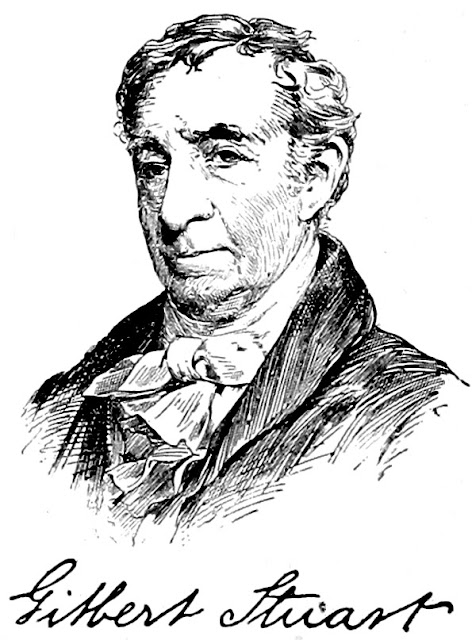 See the list of Gilbert Stuart portraits in the Portrait Gallery.