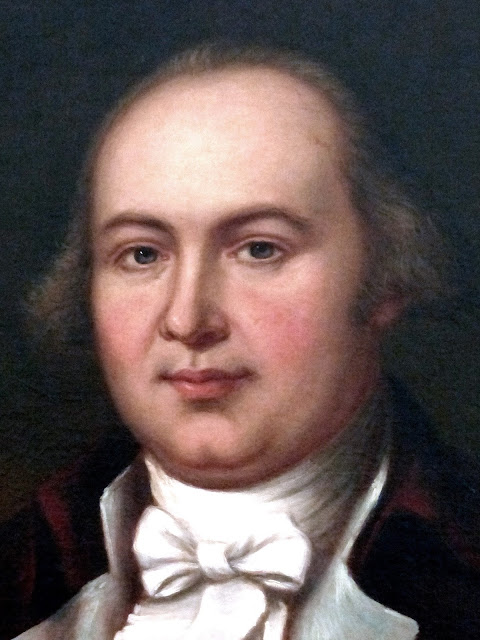 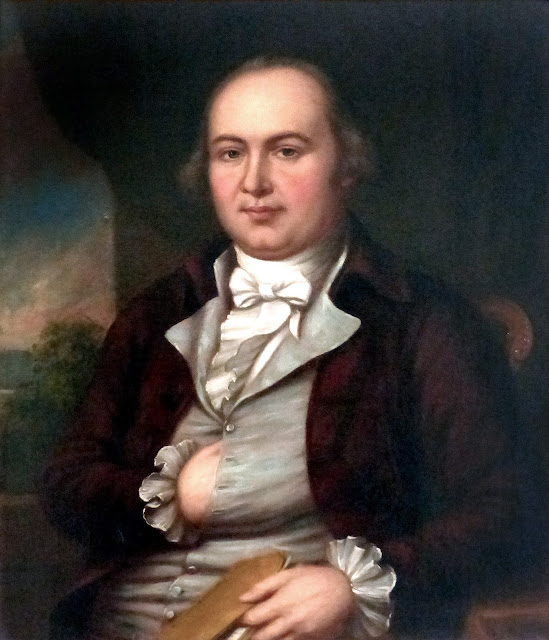 This c. 1800 painting of Charles Carroll of Bellvue, attributed to John Paradise, hangs in Dumbarton House in Washington, DC.


"Charles Carroll, a cousin to the signer of the Declaration of Independence, also named Charles Carroll of Maryland, moved to Washington in 1813 and purchased the Nourse Estate, now Dumbarton House. He renamed the estate Bellevue. Living at Belle Vue during the burning of Washington, DC August 24, 1814, he assisted Dolley Madison in her escape from the President's House (the White House).


Carroll's apparent age and his clothing indicate the painting was executed around 1800. However, the artist's youth at the time suggest that Paradise may, at some later date, have copied an earlier portrait. The Frick Art Reference library documents a nearly identical portrait of Carroll, c. 1800, by Charles Peale Polk..." -- Dumbarton House Museum

Charles Carroll was born in his father's home at Carrollsburg which is now Southeast Washington. When his father died in 1773 he inherited three Maryland land grants, Girls Portion, Clouin Course, and Aix-la-Chapelle in what was then Frederick County. But Charles built his estate in what in 1776 became Washington County. He came of age in 1788 and in 1789 began purchasing property in Hagerstown. In 1794, he became a Major of the 8th Regiment, Washington County Militia. By 1803-4 he had 182 oz. of silver plate, 28 slaves, 27 horses, 100 head of cattle and 1,000 acres of land. He built a house in Hagerstown at a site that is now the Rest Haven Cemetery and named it Belle Vue. Thereafter he styled himself "Charles Carroll of Belle Vue." In 1811 he came to Washington DC. and in 1813 bought a house from Joseph Nourse which he named Belle Vue after his country house in Hagerstown. This house eventually came to be Dumbarton House, the headquarters of the National Society of the Colonial Dames.

In August of 1814, when the British invaded Washington, Carroll as a friend of James and Dolley Madison, played his part. Carroll was with President Madison at the Navy Yard when word came that the British were headed for Bladensburg. Madison's horse came up lame and Carroll traded horses with the president as Madison rode off to the Battle. Later that day as the battle of Bladensburg was being lost, Carroll showed up at the Presidents house (now called the White House) as Mrs. Madison was finishing packing for her flight from the Capital. He waited impatiently as Dolley had the portrait of Washington removed from its frame a sent into safe keeping. Dolley, her inlaws Richard and Anna Cutts and Mr. Carroll retreated to Belle Vue before heading into Virginia in search of the president. Carroll appears the next day in the company of William Thornton who argued the British invaders out of burning the patent office at Blodget's Hotel. Later when the alarm was over Carroll pointedly refused to shake the hand of Secretary of War Armstrong who he, among others, blamed for the disaster.

In the mean time, Carroll's eldest son Henry was in Ghent as Henry Clay's personal secretary. It was Henry Carroll who hurried the peace treaty back to Washington for signature and ratification, thus ending the war of 1812.

The picture below of a portrait of Charles Carroll of Belle Vue resembles the Paradise painting but appears to be a different portrait, perhaps the Charles Peale Polk portrait. It was published in Robert F. McNamara's article Charles Carroll of Belle Vue Founder of Rochester in Rochester History Vol. XLII, No. 4, October 1980. Not only does Carroll face in the opposite direction but the book in his left hand is nowhere to be seen. 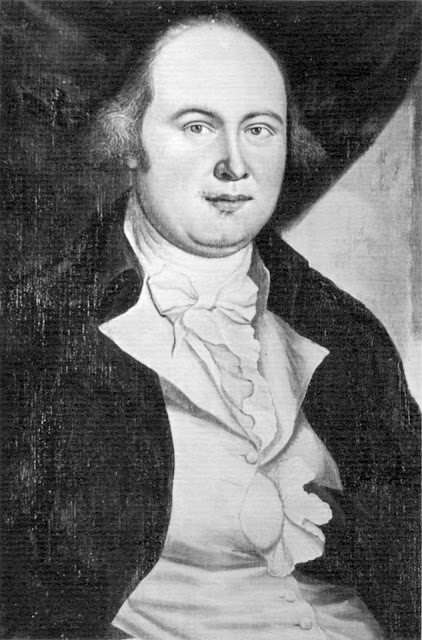