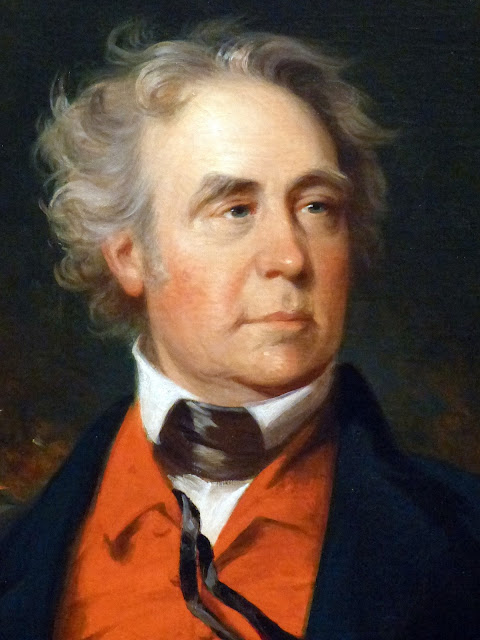 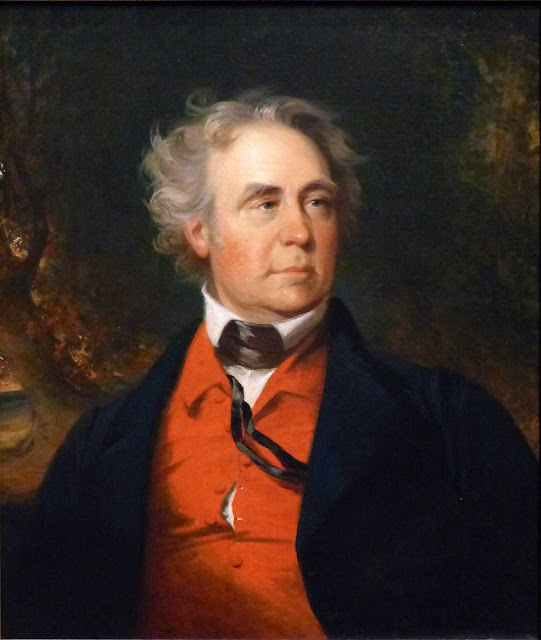 This 1843 portrait of Richard Mentor Johnson by John Neagle hangs in the National Gallery of Art in Washington, DC.


"The successful Philadelphia portrait painter John Neagle received one of the most important commissions of his career in 1842, when Whig Party members requested a full-length likeness of their presidential candidate Henry Clay (The Union League of Philadelphia). To execute the portrait, Neagle traveled to Frankfort, Kentucky, where he received additional commissions including this painting of Clay’s fellow Kentuckian Richard Mentor Johnson (1780-1850). Like Clay, Johnson served in both houses of Congress; he also served as the ninth Vice President of the United States in the administration of Martin Van Buren (1837 to 1841).

The son-in-law and student of Philadelphia painter Thomas Sully, Neagle displayed the same bravura brushwork as his mentor. Dazzling strokes define Johnson’s trademark red waistcoat, shiny silk cravat, ruddy complexion, and the breeze-blown gray curls that frame his pensive face. They also enliven the dense, lush trees edged in fall foliage, whose crimson color echoes that of Johnson’s vest. Neagle’s choice of a landscape background, rather than a studio setting, was relatively unusual for portraiture during this era." -- The National Gallery of Art.


"Richard Mentor Johnson (October 17, 1780 – November 19, 1850) was the ninth Vice President of the United States, serving in the administration of Martin Van Buren (1837–41). He is the only vice president ever elected by the United States Senate under the provisions of the Twelfth Amendment. Johnson also represented Kentucky in the U.S. House of Representatives and Senate; he began and ended his political career in the Kentucky House of Representatives." -- Wikipedia

Perley describes Johnson as “looking, in his scarlet waistcoat and ill-fitting coat, not as the killer of Tecumseh, but as the veritable Tecumseh himself.” In another place Perley says, “He was of medium size, with large features, and light auburn hair, and his private life was attacked without mercy by his political opponents.”
Richard Johnson was known for his crusade to outlaw Debtor's Prison. This image appeared in Asahel Langworthy's Biographical sketch of Col. Johnson of Kentucky in 1843. 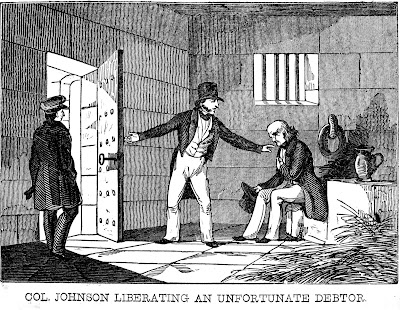 Perhaps Johnson was most famous for killing Tecumseh at the Battle of the Thames in 1813, when he was a Colonel of Cavalry. His Senate biography considers that claim dubious and quotes Tennessee Supreme Court Chief Justice John Catron who remarked to Andrew Jackson in 1835, “ . . . I pray you to assure our friends that the humblest of us do not believe that a lucky random shot, even if it did hit Tecumseh, qualifies a man for the Vice Presidency.” The slogan of Johnson's Vice-Presidential campaign was “Rumpsey Dumpsey, Rumpsey Dumpsey, Colonel Johnson killed Tecumseh.” 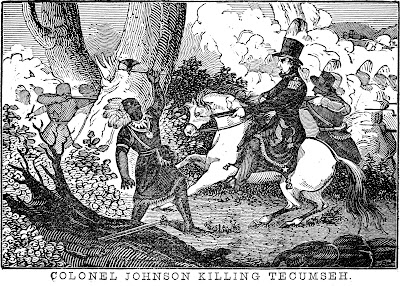 See The Portrait Gallery: Tecumseh.
Johnson was gravely wounded at the Battle of the Thames and barely survived.
This water-color on ivory miniature of Richard M. Johnson by Anna C. Peale was painted in 1818, when Johnson was serving in the House of Representatives. (The original is in the Museum of Fine Arts in Boston.) 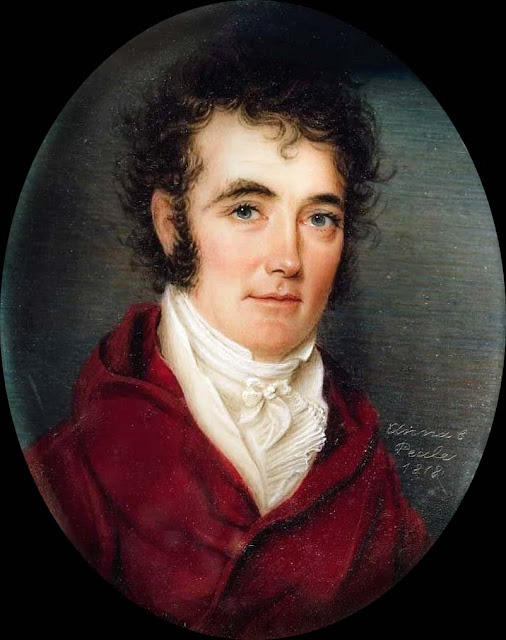 In 1819 Johnson hosted the Choctaw Academy, an elite school for Choctaw students on his farm. Peter Pitchlynn was among the alumnae of the Academy.
Julia Chinn is often described as Johnson's "common-law wife". She was an enslaved woman of African ancestry, owned by Richard M. Johnson, reportedly a gift from his parents. Johnson openly called Julia his wife and gave his name to their two daughters, Imogene and Adeline.  We really don't know what Julia Chinn looked like but this modern picture is circulating on the internet: 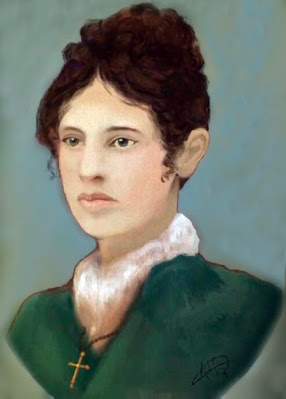 Julia Chinn
Julia died in 1833, at age 42 or 43,  during a cholera epidemic at the Academy, the location of her grave in unknown.
Richard Johnson's relationship with Julia Chinn nearly cost him the Vice-Presidency. In 1836 Johnson ran for vice-president on the same Democratic ticket as Martin Van Buren. Van Buren won the election with 170 electoral votes but 23 Virginia electors who supported Van Buren refused to vote for Johnson because of his inter-racial marriage. Johnson was 1 electoral vote short of the 148 needed to win.  Under the rules set by the 12th amendment,  the Senate decides who will be vice-president if no candidate gets enough votes in the electoral college. The Senate chose Johnson. See Hatfield et al. 1997.
Cartoons like the one below, from the 1836 campaign, representing a “Jinnoowine Johnson Ticket” demonstrate the level of nastiness in 19th century political campaigns. (LOC) 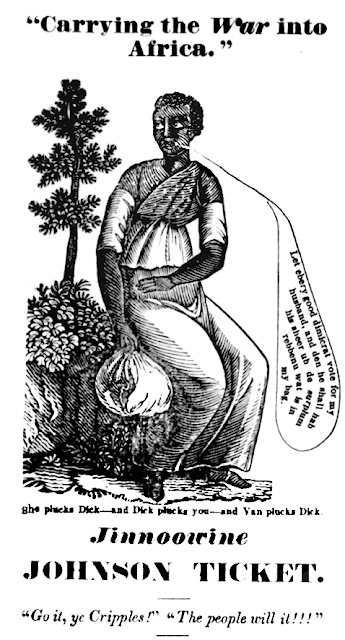 In this caricature, a woman presumably representing Julia Chinn Johnson says  “Let ebery good dimicrat vote for my husband, and den he shall hab his sheer ub de surplum rebbenu wat is in my bag,” The caption reads “She plucks Dick -- and Dick plucks you -- and Van plucks Dick.” I suspect that sounded as vulgar to 19th century people as it does to me, but as Ford and Wienburg point out,  “the earliest recorded reference to ‘dick’ as slang for penis does not appear until 1891.” “Go it, ye Cripples!” and “The people will it!!!” are apparently Democratic Party slogans. (see Tanisha C. Ford and Carl R. Wienberg, Slavery, Interracial Marriage, and the Election of 1836.)
Johnson's official Vice-Presidential bust was made in 1895 by James P. Voorhees, the son of then Senator Daniel W. Voorhees of Indiana. Young Voorhees had no experience in sculpture at the time, prompting the Seattle Post Intelligencer to compare him to the man who when asked if he could play the piano replied, “I don't know,  I've never tried.”  The bust is closely modeled on Neagle's painting from 52 years earlier. 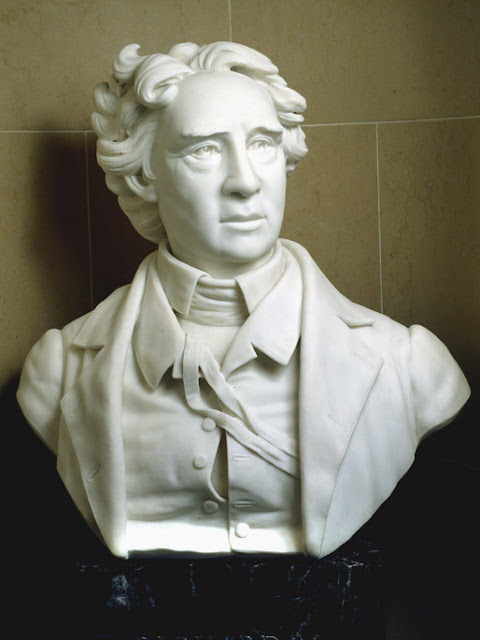 The vice president plunged headlong into the fray, opening his shirt to display battle scars before an Ohio audience, revisiting the Battle of the Thames in progressively more lurid detail with each retelling, and delivering ‘‘rambling’’ diatribes on several occasions. He always also took care to remind western audiences that Van Buren had ‘‘raised himself from a poor Dutch orphan boy to the highest station in the world.’’ During an Ohio campaign tour with Governor Wilson Shannon and Senator William Allen, the trio’s inflammatory charges against Harrison touched off a riot in Cleveland. Still, as Robert Gray Gunderson concluded in his study of the ‘‘log-cabin campaign,’’ ‘‘Old Rumpsey Dumpsey conducted a more effective campaign than any other Democrat in 1840.’’

Col. Johnson’s marriage to Julia Chinn was so well known that in 1858, years after Johnson’s death, in the 4th Lincoln-Douglas debate, Abraham Lincoln referred jokingly to it. Lincoln’s opponents had accused him of subscribing to such a thorough-going idea of racial equality that he must want to marry a black woman. Lincoln denied a belief in racial equality and denied wanting to marry a black woman. He turned the tables on Douglas by reminding the crowd of Douglas’s friend and fellow Democrat Richard Mentor Johnson.“... I have never seen to my knowledge a man, woman or child who was in favor of producing a perfect equality, social and political, between negroes and white men. I recollect of but one distinguished instance... the case of Judge Douglas' old friend Col. Richard M. Johnson [Laughter]...” Read the full quote in context.
Richard Mentor Johnson died of a stroke November 19, 1850.  The Anti-Slavery Bugle, in New-Lisbon, Ohio, published this short obituary on November 30th:

Richard M. Johnson of Ky., formerly Vice President of the United States, died at his home near Frankfort, Ky. on the 17th inst. His honorable conduct toward his children, the offspring of a black mother, not his wife, is the brightest spot in the history of his life.

He was 70 years old and had just been elected to the Kentucky legislature. He was interred on at Frankfort Cemetery. This portrait appears on his grave. 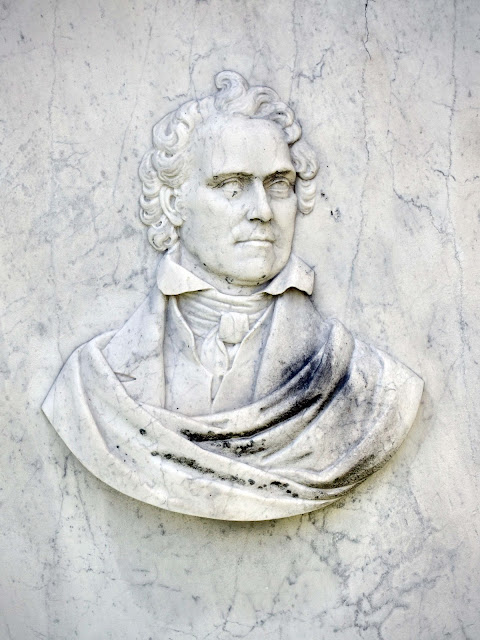 Along with a, now  headless, image of Johnson killing Tecumseh. 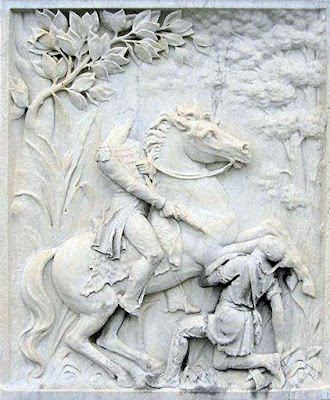 The epitaph on one side of the monument reads:
Richard Mentor Johnson
Born At
Bryants Station, Kentucky
On The 15th Day Of October
1781
Died In
Frankfort, Kentucky
On The
19th Day Of November
1850.
Another gives a short biography:
To The Memory Of
Colonel Richard M. Johnson
A Faithful Public Servant
For Nearly Half A Century As A Member
Of The Kentucky Legislature And
Representative And Senator In Congress:
Author Of The Sunday Mail Report
And Of The Laws Abolishing Imprisonment
For Debt In Kentucky
And In The United States;
Distinguished By His Valour
As Colonel Of A Kentucky Regiment
In The Battle Of The Thames;
Four Four Years Vice-President
Of The United States.
Kentucky, His Native State
To Mark The Sense Of His Eminent Service
In The Cabinet And In The Field
Has Erected This Monument
In The Resting Place Of
Her Illustrious Dead.
“The Sunday Mail Report” was Johnson's 1829 argument that the United States ought not to favor any particular religion by forbidding handling or delivery of mail on Sunday.
If we need a shorter summary of Richard Mentor Johnson's historical significance, it's in John Hix's cartoon, Strange as it Seems. This instance appeared in The Washington Evening Star, August 23, 1938, Page B-17. 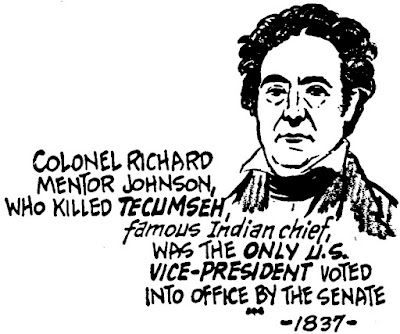 Note: This blog entry has been updated several times since 2016.
Posted by Allen Browne at 6:20 AM