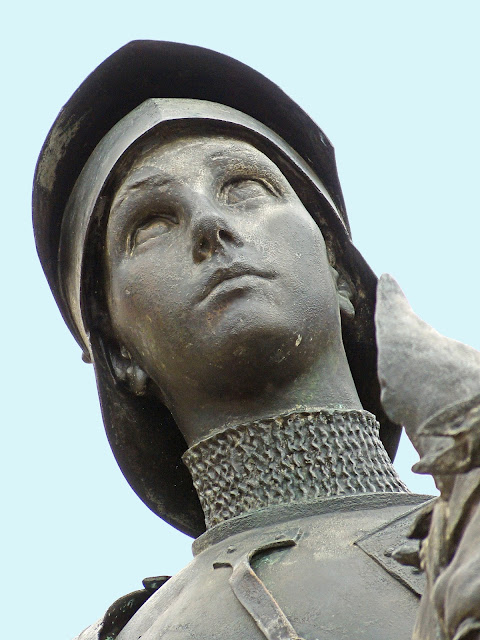 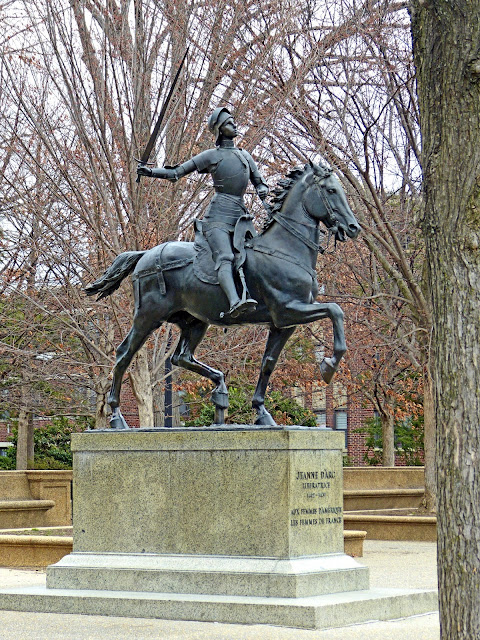 This statue of Jeanne D'arc by Paul  DuBois stands at the south end of Meridian Hill Park in Washington, DC. It is a 1922 replica of the 1889 original.
The National Park Service says this of the Joan of Arc Statue:

The Joan of Arc Statue is the only equestrian statue of a woman in Washington, DC. Joan of Arc was a heroic French figure who claimed to receive religious visions telling her to fight for France and overthrow the English during the Hundred Years' War. Upon her capture and trial at the hands of the English, she was burned at the stake, leading the Catholic church to recognize her as a martyr in 1456. She was beatified in 1909 and canonized in 1920. This statue, a copy of the original at the Rheims Cathedral, was erected in 1922. The statue was a gift from the Society of French Women of New York. -- NPS 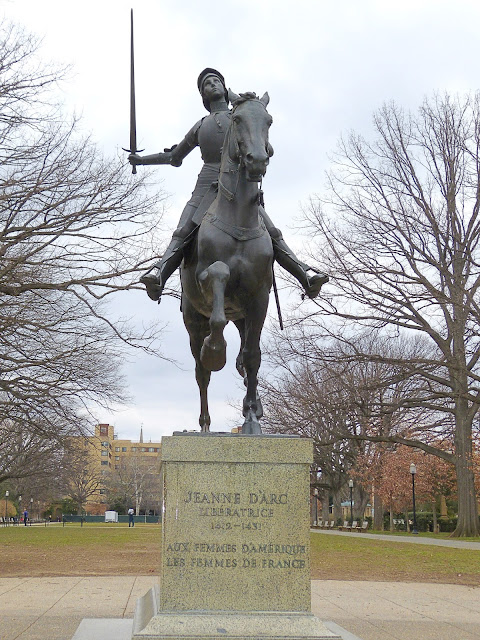 The statue was dedicated on January 6, 1922. In this Harris & Ewing photo, John W. Weeks, Secretary of War accepts the statue on behalf of the United States. cf. The Evening Star, Jan 7, 1922. (Warren Harding, Ambassador Jusserand, and their wives are also visible in the photo if you look closely.) 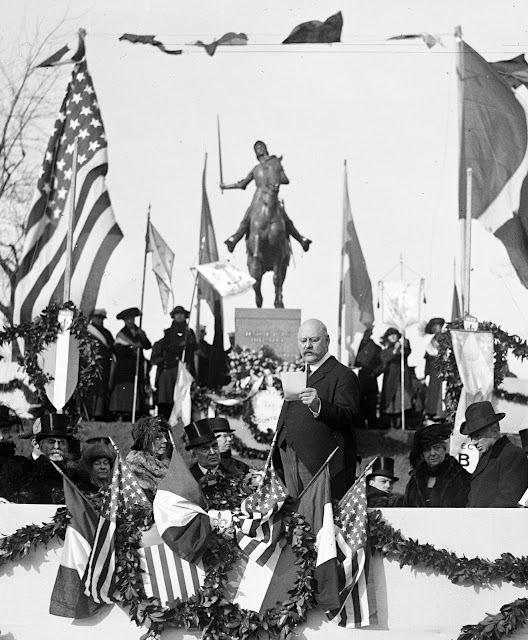 The memorial was accepted on behalf of the Women of America by Anne Rogers Minor, President-General of the Daughters of the American Revolution.
The B&O Magazine in May of 1922 said that traditions were broken at the unveiling “...a salute of 17 guns was fired by a battery of U. S. artillery from Fort Myer. This salute is one accorded only to field marshals, but through a special Act of Congress it was given on this occasion for the first time in history to a woman.” 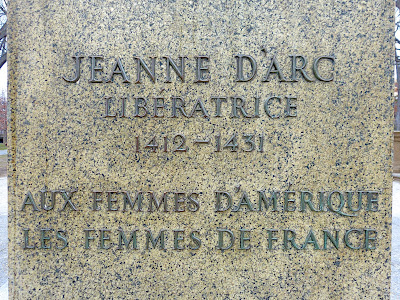 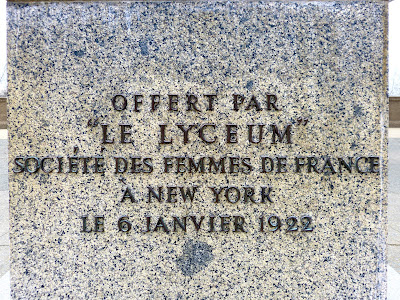 The beautiful new Jeanne d'Arc monument is a gift to the National Capital from the Society des Femmes de France of New York, offered through their President Fondatrice, Madame Carlo Polifeme, to the Commission of Fine Arts five years ago.
“The Lyceum, Society de Femmes de France of New York.” wrote Madame Polifeme, in May, 1914. “In a spirit of patriotism, nurtured by exile, inspired with a deep sense of the friendship that binds our two sister Republics, animated by a sympathy born of closer and closer relations. intends to perpetuate these sentiments by erecting in their new home a monument to Jeanne d'Arc, emblem of patriotism, emblem of love and peace. The statue of our French heroine will be built to the glory of womanhood, dedicated by the women of France in New York, to the women of America, and offered to the city of Washington.”

The project was delayed by the World War. The Herald further goes on to say that:

“The work is regarded by artists as the finest equestrian statue of modern times.” So the Commission of Fine Arts informs us. Paul Dubois is a leading French sculptor. This monument is a replica of the celebrated statue of Jeanne d'Arc in front of Rheims Cathedral in France, which it was believed miraculously preserved the cathedral from destruction during the bombardment of the late war. Our new statue was prepared under the direction of the French Minister of Education and Fine Arts, in Paris. It measures about nine feet in height and ten feet in length, and is supported by a pedestal of about six feet in height, designed by McKim, Mead and White, architects of New York City. The statue was set in place under the supervision of Lieut. Col. C. O. Sherrill, officer in charge of public buildings and grounds. 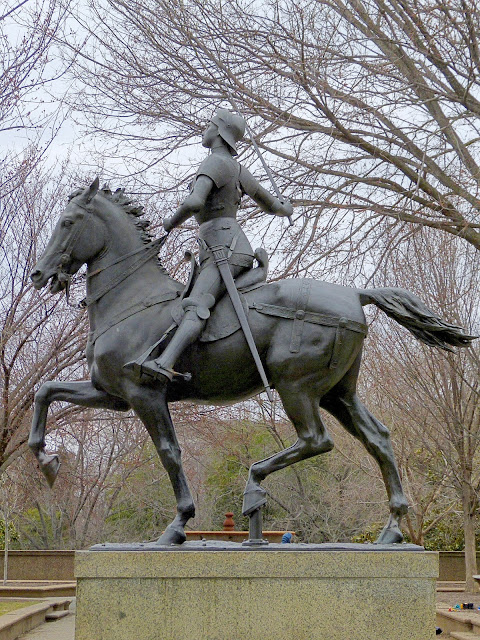 St. Joan is shown riding a spirited stallion and wielding a sword. But since its dedication in 1922 the sword has been repeatedly stolen.  Rosa Cartagena in Washingtonian, Nov. 30, 2016 gives a timeline of the loss and replacement of Joan of Arc's Sword.  The sword was missing in this photo I took in 2007. 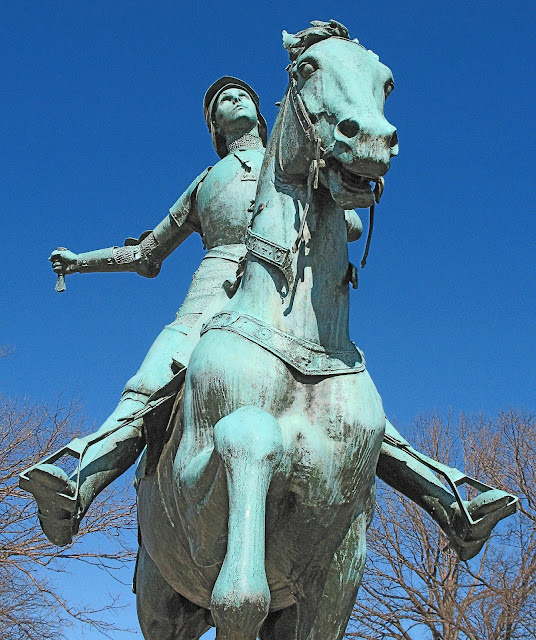 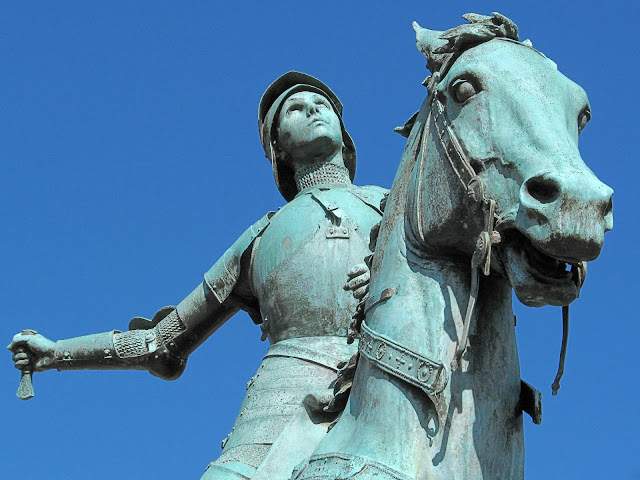 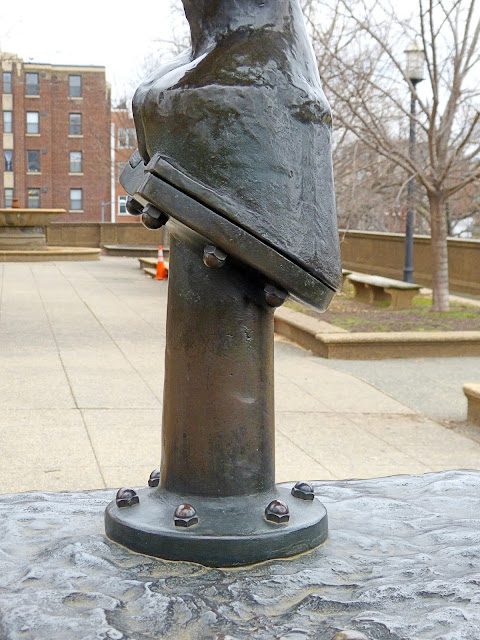 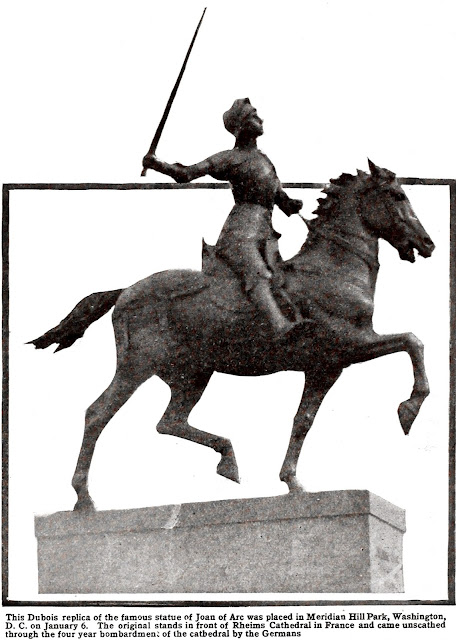 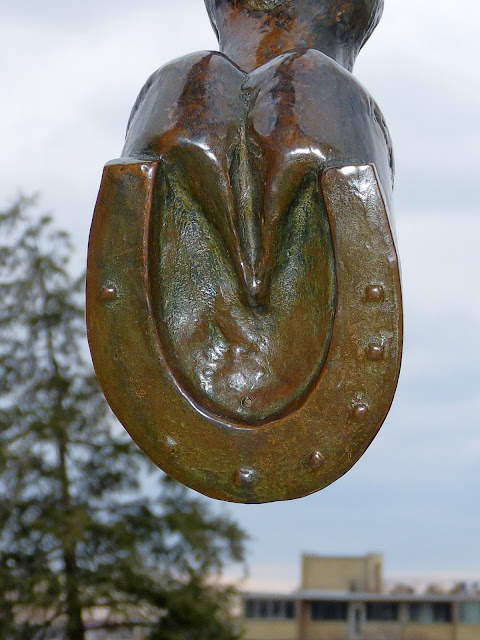 The statue looks over the south end of Meridian Hill, down 16th Street, Toward down-town DC. Here Joan confronts the Washington Monument. 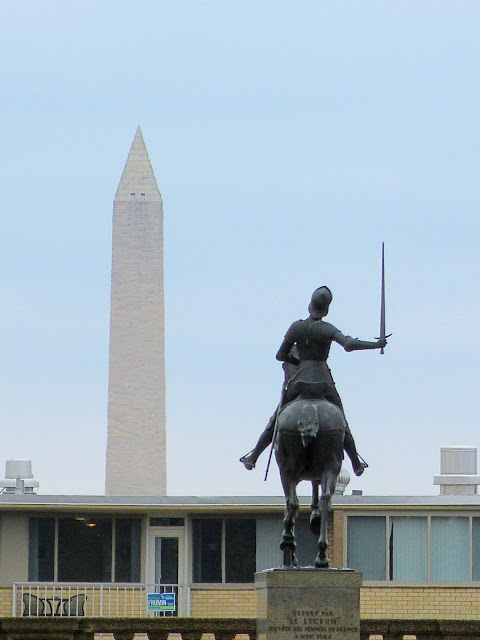 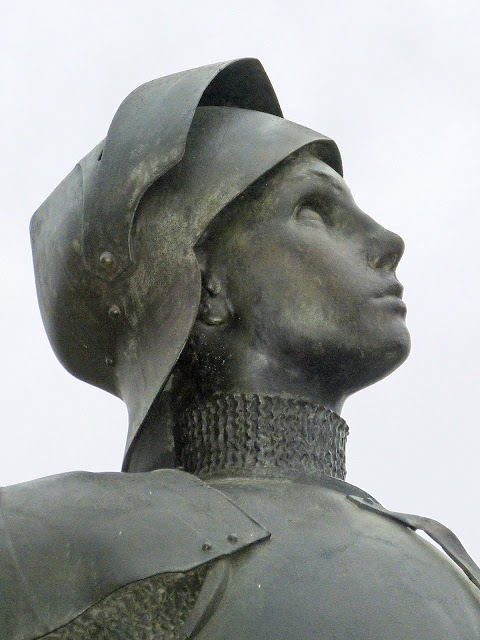