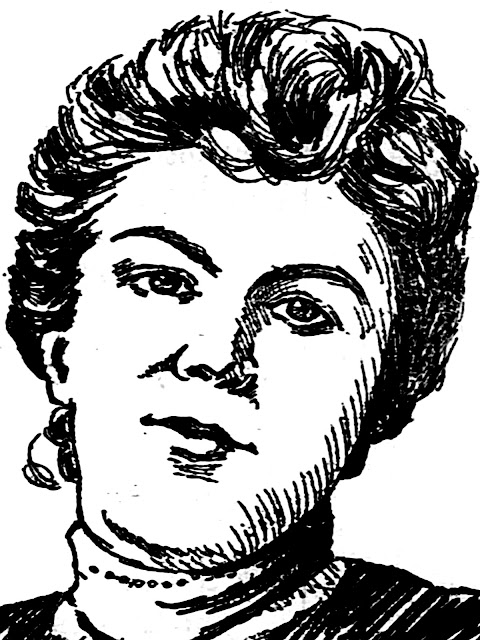 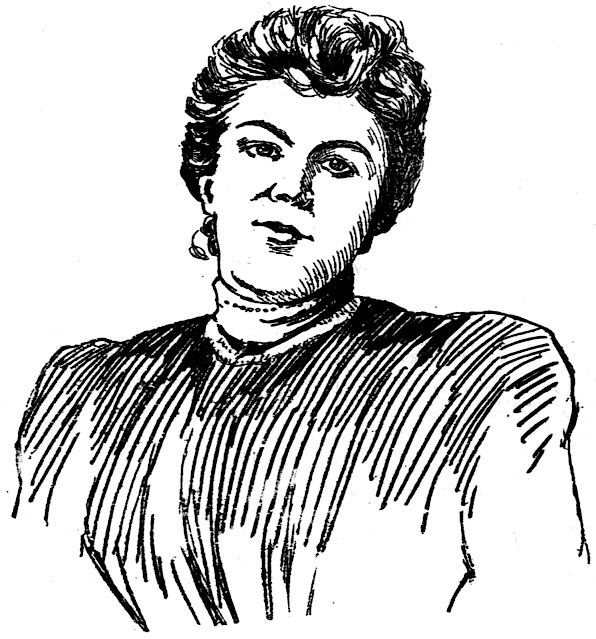 This wood cut of the Washington socialite, Mildred McLean Hazen appeared on November 9, 1899 in a newspaper notice that she had just married fabulously celebrated Admiral Dewey who had just returned from his victories in the Spanish American War.

Mrs. Dewey is one of the most brilliant women in Washington. Possessed of ample means, ready wit, great conversational powers, a thorough knowledge of society and society persons, a grasp of politics and public questions, she is regarded as an ideal wife for the admiral.
About forty, and of plump figure, she has a flow of spirits and a keen sense of the ludicrous, and is said to be at her best when telling a humorous story. The friends of both say it is Mrs. Dewey's jolly disposition that has the particular attraction for the admiral, who enjoys wit and humor in others hugely and cracks his own little joke in company quite early so an indication of the strain in which he would like see the conversation conducted.
Mrs. Dewey's chief charm, aside from her sparkling eyes and smile is a profusion of auburn brown hair, faintly tinged with gray and rolled high from her forehead, with a trifling suggestion of a bang.
An Episcopalian originally, Mrs. Dewey became a convert to Catholicism several years ago, and, while not a zealot, professes the religion.

This 1900 portrait of Mildred McLean Hazen Dewey by Théobald Chartran belongs to the National Portrait Gallery. 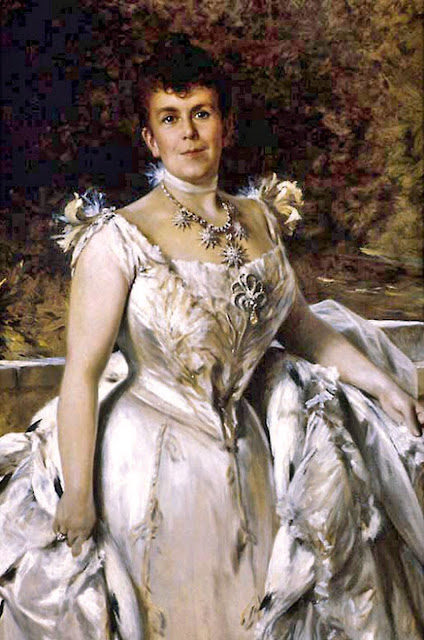 The Rutherford B. Hayes Presidential Library gives this short biography.

Mildred McLean Hazen Dewey was the daughter of Washington and Mary Darneal McLean. She was born in Cincinnati, Ohio, in 1850. Washington McLean was the owner of the Cincinnati Enquirer and was a prominent figure in the Democratic Party. Mildred McLean married General William B. Hazen, a career soldier of Civil War and Indian War fame, in 1871. They had a daughter who died in infancy and a son who died at the age of twenty-two in 1898. General Hazen died in 1887. Mildred Hazen became a fixture of Washington, D.C., society and married Admiral George Dewey in 1899. Mrs. Dewey died February 21, 1931.

The Dewey's marriage was widely covered by the newspapers. This representation is from The Anaconda Standard, Anaconda Montana, Sunday Morning November 12 1899. (See my list of newspaper illustrations of Mrs. Dewy.) 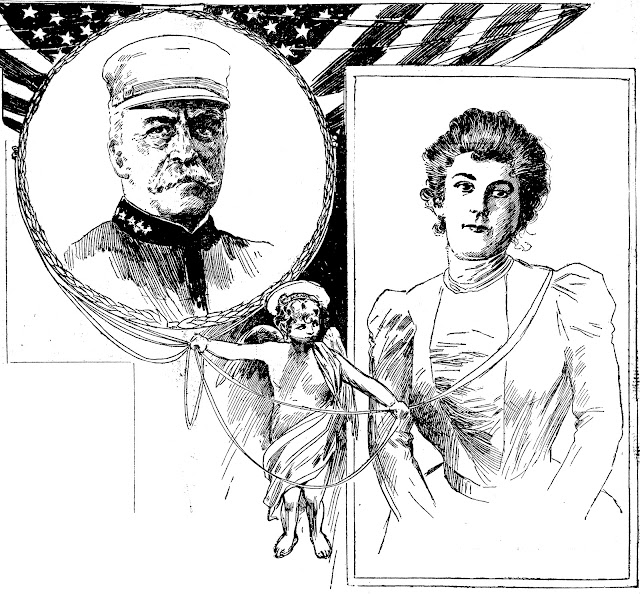 The details of Mrs. Dewey's Trousseau were discussed in the San Francisco Call among other papers. 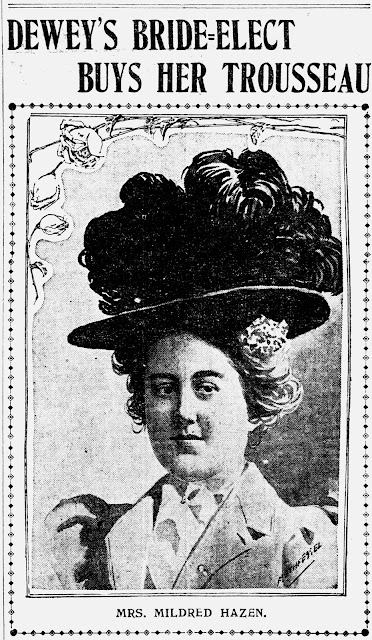 And here's an image of Admiral and Mrs. George Dewey by A. Bradshaw from the The San Francisco Call November 10, 1899. 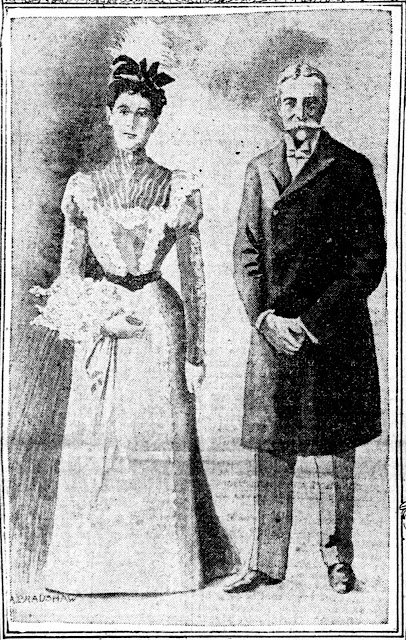 The New York Journal and Advertiser,  had this on November 10th. 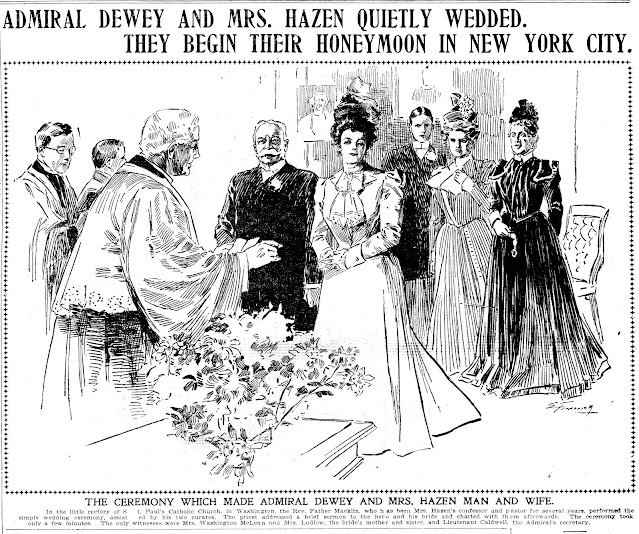 Admiral Dewey and Mrs. Hazen Quietly Wedded.
They Begin their Honeymoon in New York City.
Mobs of  well wishers prevented the honeymooning couple from wandering the streets of New York. They had to remain indoors.  B. Smith in The Saint Paul Globe humorously imagined this domestic scene. 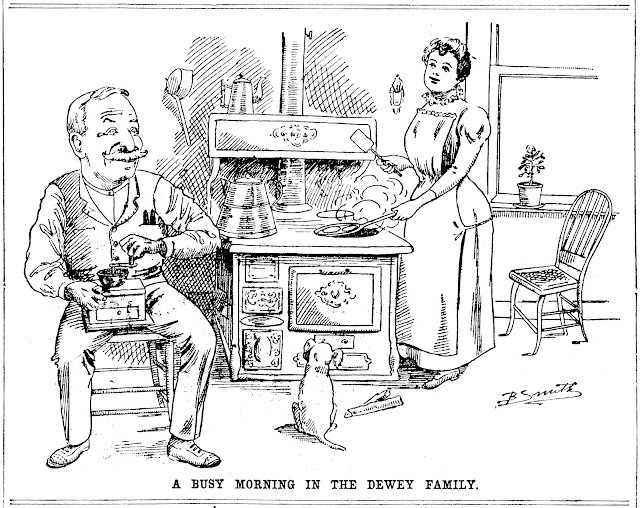 A Busy Morning in the Dewy Family
Admiral Dewey pleaded with the  public on behalf of his wife.

This afternoon Manager Bolt of the Waldorf-Astoria made the  following statement:

“Admiral Dewey requests me to say that he would feel thankful if the newspapers would call the attention of the public to the annoyances he and his wife have been subjected to and request the people to cease their demonstrations.

“The admiral says he appreciates the  fact that the demonstrations are caused by good will and would not mind them so much himself, but is makes his wife nervous and greatly upsets  her. He says that he and Mrs. Dewey were personally made prisoners to-day by crowds.”

Many people travelled to New York to see Dewey and his bride. A laundry company in Watertown Wisconsin issued this ad on November 21, 1899. 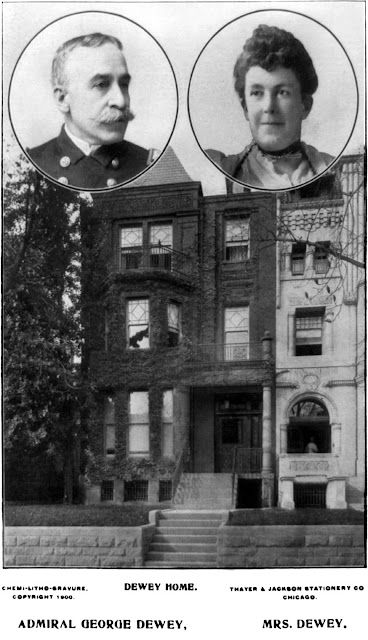 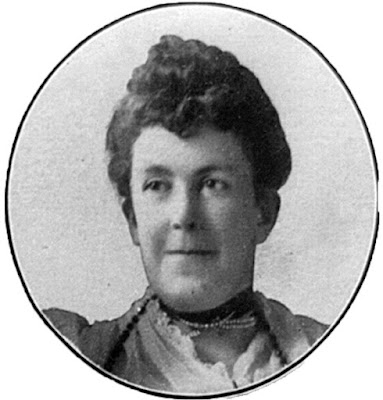 Mrs. Dewey.
The $50,000 house along with about $10,000 worth of furnishings  had been purchased with money raised by subscription and given to Admiral Dewey in October of 1899, to honor his success in the Spanish American War.  Read Edith Warren Stetson's description of Admiral Dewey's Home and Its Mistress. 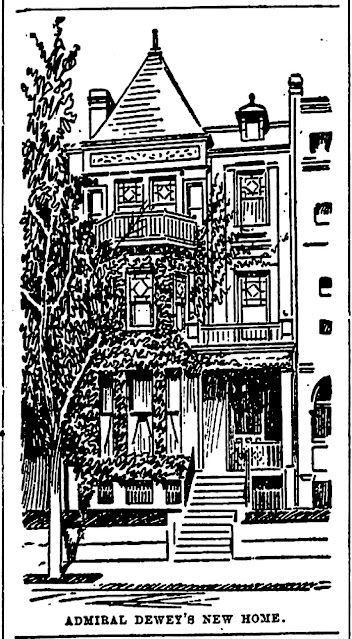 Public praise turned to disapproval when Dewey signed the house over to his wife Mildred and she in turn signed it over to the admiral's son George Dewey, Jr.  The Dewey family released a statement explaining that they intended to continued living at 1747 Rhode Island Avenue “as long as {Admiral Dewey} may live,” and that the transfer was only intended as a secure way to pass the property on to Admiral Dewey's son.

“It may be desirable now to say that it was the wish of both the admiral and Mrs. Dewey to provide for a proper succession to the property. By all those interested in the matter the method of transfer adopted was considered the best and safest that could have been adopted.” (Mankato Free Press, Dec. 10, 1899.) However, in 1907, the Dewey's moved away from 1747 Rhode Island into Mildred's old home at 1601 K Street. The Rhode Island Ave. house was rented out.  Many newspapers carried a story headlined “Dewey to leave home presented by people,” along with this illustration. 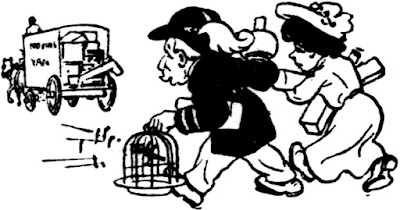 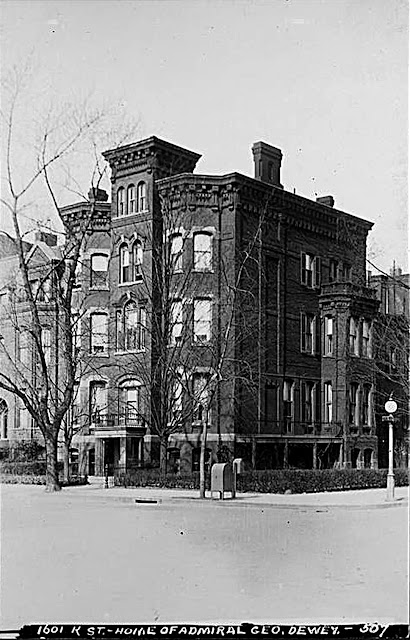 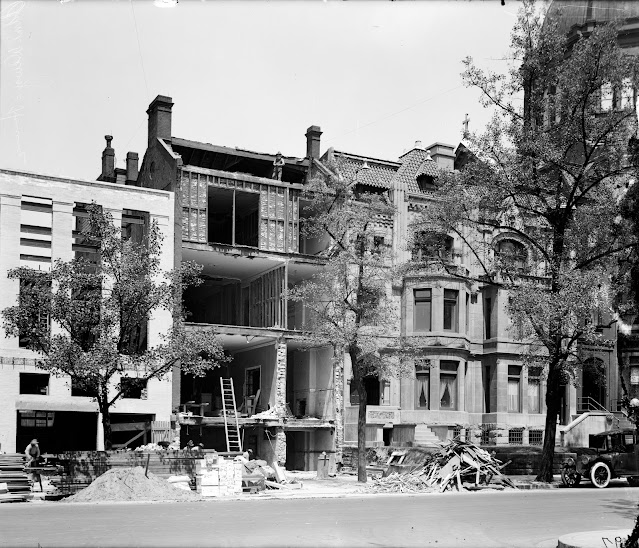 "This is the house that the American people some years ago bought by popular subscription to present to Admiral Dewey, the Hero of Manila Bay. The Admiral immediately transferred title to his wife and the latter has now disposed of the property. It is being torn down and will be replaced by business property."  -- Library of Congress

The Dewey house on Rhode Island Avenue was replaced by the Dewey Building designed by architect George Ray. 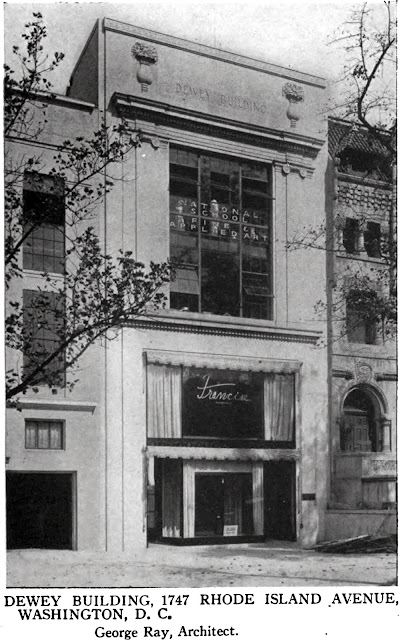 Architecture, Vol XLV, No. 3 March 1922.
Mrs. Dewey died in 1931 and was interred in the crypt at the National Cathedral along side Admiral Dewey. 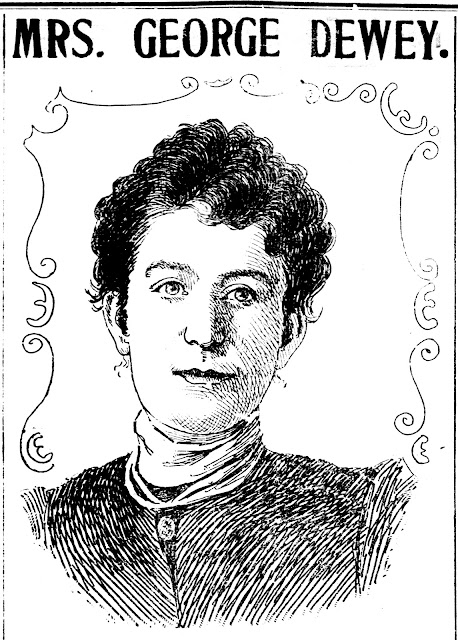