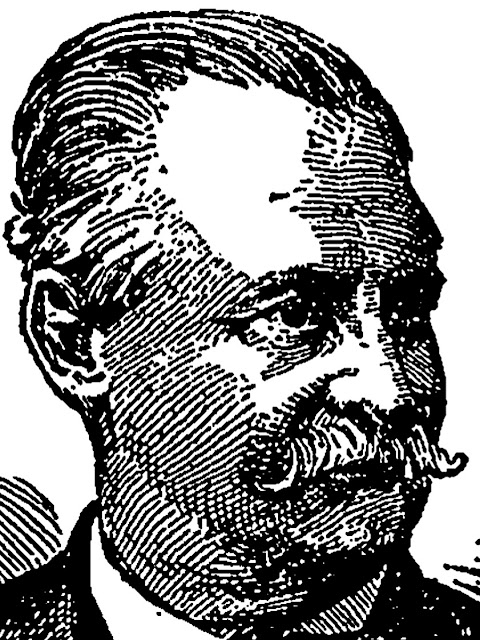 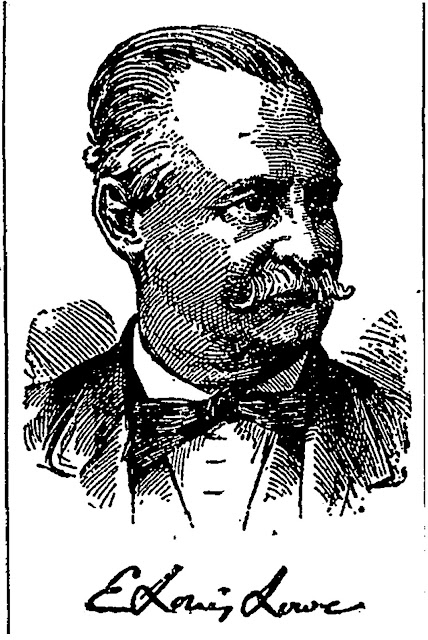 E. Louis Lowe
This woodcut of E. Louis Lowe appeared in the Baltimore Sunday Sun on March 31, 1907, as part of a series on Maryland Governors by Heinrich Ewald Buchholz. This 1886 autograph that went on sale at Amazon, in 2014 gives a brief explanation of who E. Louis Lowe was. 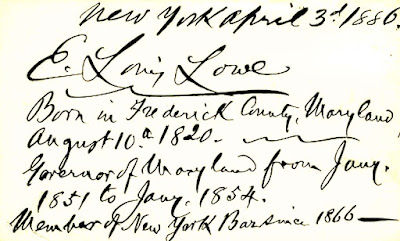 ENOCH LOUIS LOWE was born in Frederick, Maryland on August 10, 1820. His education was attained at St. John’s School in Frederick, at Clongowa Wood College in Ireland, and at the Jesuit College in England, where he graduated in 1839. He later studied law, was admitted to the bar in 1842, and then established his legal career in Frederick County. Lowe entered politics in 1845, serving as a member of the Maryland House of Delegates. He was elected governor of Maryland by a popular vote on October 2, 1850 and was sworn into office on January 6, 1851. During his tenure, the State Constitution of 1851 was ratified; construction on the Baltimore and Ohio Railroad to the Ohio River was completed; the office of comptroller of the treasury was created; election law amendments were supported; the state deficit was reduced; and criminal code revisions were recommended. After completing his term, Lowe left office on January 11, 1854. He later served as a Democratic presidential elector in 1860, and supported the Confederacy during the Civil War. Governor Enoch Louis Lowe passed away on August 23, 1892, and was buried at the St. John’s Catholic Cemetery in Frederick, Maryland. -- NGA 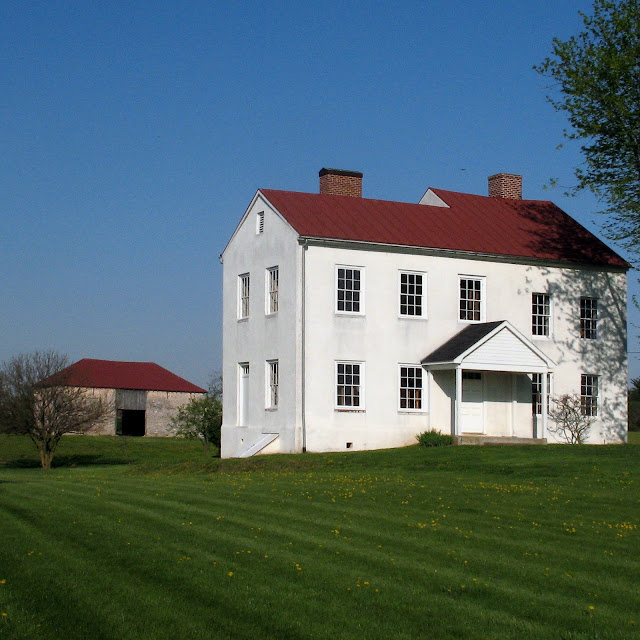 One of the slaves the Vincendiere's brought with them from Haiti, was Francois Anjou who escaped in 1809. This notice appeared in the Baltimore Federal Gazette on December 13, 1810. 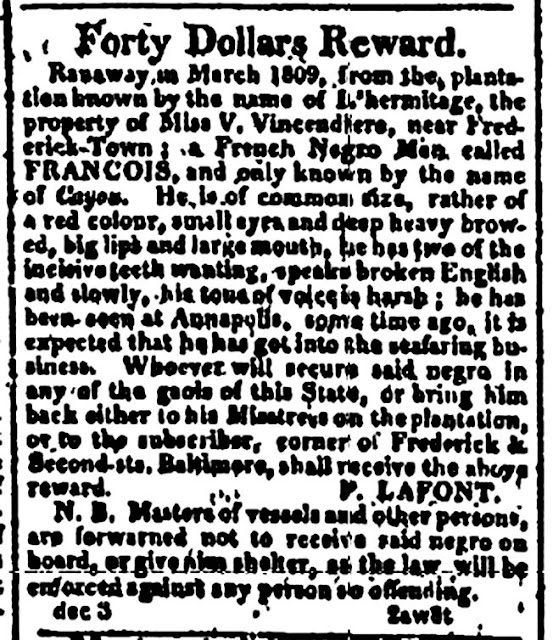 Forty Dollars Reward
Ranaway in March 1809, from the plantation known by the name of L’hermitage, the property of Miss V. Vincendiere, near Frederick-Town; a French Negro Man called FRANCOIS, and only known by the name Cayou. He is of common size, rather of a red color, small eyes and deep heavy browed, big lips and large mouth, speaks broken English and slowly, his tone of voice harsh; he has been seen in Annapolis, some time ago, it is expected that he has got into the seafaring business. Whoever will secure said negro in any of the gaols of this State, or bring him back to the subscriber, corner of Frederick & Second Sts, Baltimore, shall receive the above reward.
F. Lafont
N.B. Masters of vessels and other persons are forwarned not to receive said negro on board, or give him shelter, as the law will be enforced against any person offending.
dec. 3

Adelaide Bellumeau de la Vincendière married Lt. Bradley Samuel Adams Lowe on September 28, 1819. Bradley Lowe was a West Pointer who fought in the War of 1812 and in the Seminole War.  They divorced soon after their son Enoch Louis Lowe was born in 1820.  The divorce took the form of a State Law.
When Victoire sold L'Hermitage in 1827 she and E. L. Lowe's mother Adelaide built a house in Frederick city. 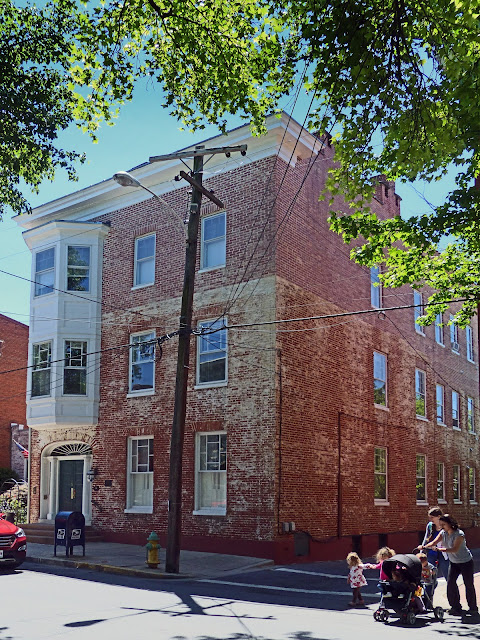 100 East Frederick Street
A plaque by the front door identifies this as the home of Enoch Louis Lowe. The future governor would have been 7 years old in 1827. 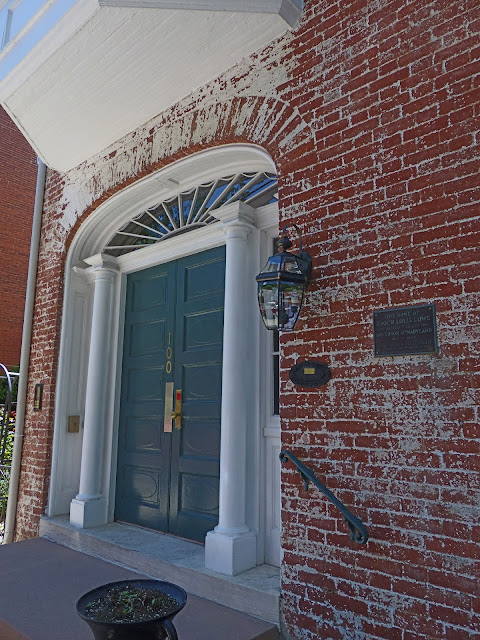 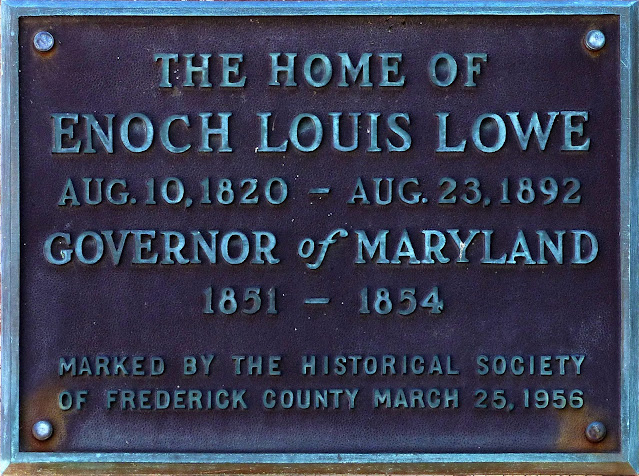 A short 1918 notice in the Baltimore Sun tells the story of the historic house.

The house, one of the landmarks of the city, was built in 1828 or 1829 by Miss Victoire de la Vincendiere, member of noted French family, who came to this country in 1792 from San Domingo. The late Enoch Louis Lowe, formerly Governor of Maryland, whose wife was formerly Miss Esther Polk, of Baltimore, and who is now residing in that city, also lived there. Governor Lowe’s mother was of the Vincendiere family. Dr. Charles Smith purchased the property from the Lowes in 1861.

E. Louis Lowe was sent to Ireland and England for a Jesuit education. After some travels he returned to Frederick and was admitted to  the bar in 1842 at the age of 21. In 1844 he married Esther Polk a noted beauty. This image was the frontispiece of her 1913 memoir. 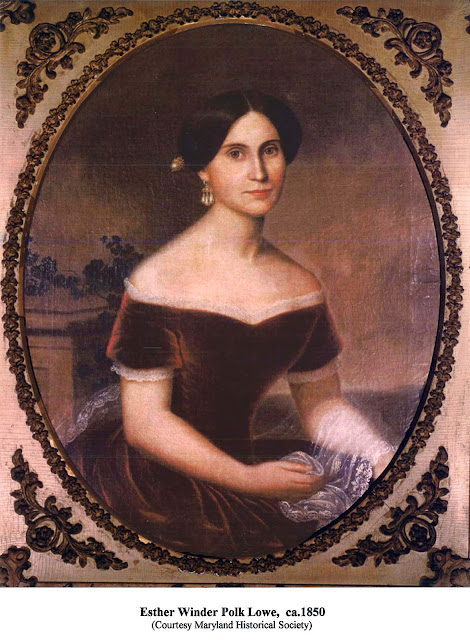 He espoused the Democratic creed, and in 1845 came before the people of Frederick county as that party's candidate for the state Legislature. His campaign accomplished two things for young Lowe— it resulted in his election to the House of Delegates and it gave him a little reputation as speaker.

The Cecil Whig repeatedly refers to him as a “Locofoco” Democrat, it's beyond me whether that's intended as a fair description or as an insult. One political question of the day was the proposal for a new Maryland constitution.  Magruder explains:

Maryland was living under the provisions of an instrument completed in convention November 11th, 1776, and never submitted to the people. On twelve occasions it had been changed and it was thought too heavy with amendments, and too antiquated for the requirements of a progressive state. Lowe ardently advocated the policy of Governor Philip Francis Thomas, and by his fluency of language and strength of argument won many friends to his cause and to himself.

Lowe ran for and won the Governorship in 1850. He was only 29 during the campaign and  attained the statutory age of 30 just before his election. In the midst of the campaign when he was asked  “How old are you?” he evasively replied  “A wife and four children.”  Lowe took office on January 6th, 1851 and the new constitution was adopted on June 4, 1851. Among other things, like reapportionment, the new constitution separated Baltimore City from Baltimore County.  Lowe served a 3 year term as governor, from January1851 to January 1854, in accord with the provisions of the old constitution. The new constitution extended the term of the governor to 4 years.

His 1855 portrait by Otto Eckhardt belongs to the Maryland State Art Collection. This photograph of it was the frontispiece of Caleb Magruder's 1910 biography of Lowe. 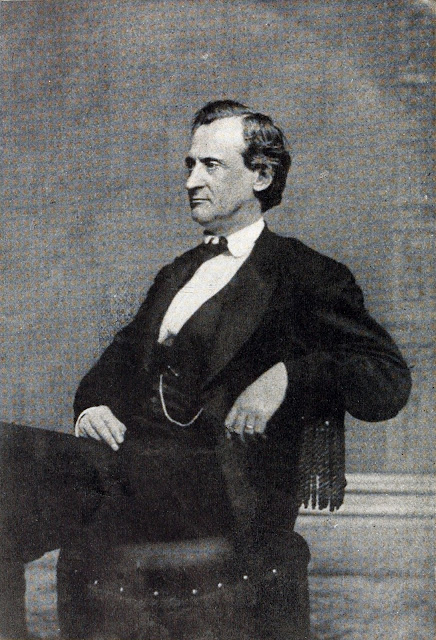 E. Louis Loweby Otto Eckhardt1855
Lowe remained active in politics after his term as governor. In 1853 president Pierce named Lowe minister extraordinary and plenipotentiary to China, but Lowe declined.  (The Baltimore Sun, June 7, 1853, Page 2.) He campaigned for Buchanan in the presidential election of 1856, and Buchanan renewed the offer that he become minister to China which Lowe declined a second time.   He supported  Breckinridge in election of 1860 and acted as a Breckinridge elector.
As a southern Democrat, Enoch Louis Lowe was a strong southern partisan and when war broke out in 1861 he went south.  Lowe remained in Maryland long enough to be involved in the April 19th Bridge burning incident that followed the Pratt Street Riot and provided the occasion for the arrest of John Merryman, leading to Justice Tawney's landmark decision in ex-parte Merryman.
When poet and professor James Ryder Randall read about the Pratt Street Riot in the New Orleans Delta on  April 23, 1861, he was shocked to learn that his friend Frances X. Ward who had been his roommate at Georgetown College, was listed as “Mortally Wounded.”  He found himself unable to sleep that night and wrote a poem entitled “My, Maryland” which refers to the  Ex-Governor in the 4th verse, as “fearless Lowe.”

Come! 'tis the red dawn of the day,

Come with thy panoplied array,

With Ringgold's spirit for the fray,

With Watson's blood at Monterey,

With fearless Lowe and dashing May,

Harold Manakee in his 1959 book, Maryland in the Civil War, identifies the names appearing in that verse.

[references] in the fourth stanza are to Major Samuel Ringgold and Colonel William H. Watson, Maryland heroes of the Mexican War, and to Governor Enoch Lowe  and Congressman Henry May, both Marylanders who strongly defended states’ rights.

Randall read the poem to his class at Poydras college the next day and it was published in the New Orleans Delta on the 26th. It was reprinted in many southern papers (e.g. the Montgomery County Sentinel). Francis X. Ward survived his wounds, joined the Confederate army, and lived until 1914. His obituary in the Evening Star tells the story.
Set to tune of Lauriger Horatius, by the Cary sisters, Maryland My Maryland became the Maryland state song on June 1, 1939 but lost that distinction on July 1, 2021.
As Mrs. Lowe told the Daughters of the Confederacy in 1912:

“When I left Frederick, 51  years ago, the tocsin of war had just sounded and with its coming the poisonous virus of hatred and revenge soon became rampant in it fury. Suspicion was in the air, and the words ‘agitator,’ ‘secessionist’ and ‘traitor’ were whispered with covert threats of imprisonment.

“Governor Lowe was among those marked as victims, and, taking warning in good time, sought refuge across the Potomac.”

The New York Times reported on July 12, 1861 that Ex-Governor Lowe arrived in Richmond on July 6. Lowe spent the rest of the war in the south mainly in Milledgeville Georgia.
On November 23rd 1865 the Baltimore Sun noted that ex-Governor Lowe was due to arrive in Baltimore that day on his way to New York “to resume the practice of his profession.” E. Louis Lowe more or less disappears from national or local politics at this point, taking up the practice of law in Brooklyn New York. As Buchholz tells it “His Spirits were Broken.”

While the conflict lasted, Mr. Lowe remained constantly on the side of the Confederacy, advising and cheering those who operated its political machinery. And when the war closed, with its defeat of all that the South had hoped for, he silently folded his tent and stole as silently from the stage of public life. He left behind him the scenes where he had witnessed the downfall of the Confederacy; he left behind him the scenes where he had won his earliest honors in his native State of Maryland, and during the last several decades of his life resided In Brooklyn, N.Y. practicing law and avoiding as much as possible publicity.

E. Louis Lowe died in Brooklyn on August 23, 1892. His obituary in the Sun said that “He was, perhaps, the greatest stump speaker of his day, and well suited the time in which he figured.” His body was moved to Frederick and buried in St. John's Cemetery next to his Mother's grave. 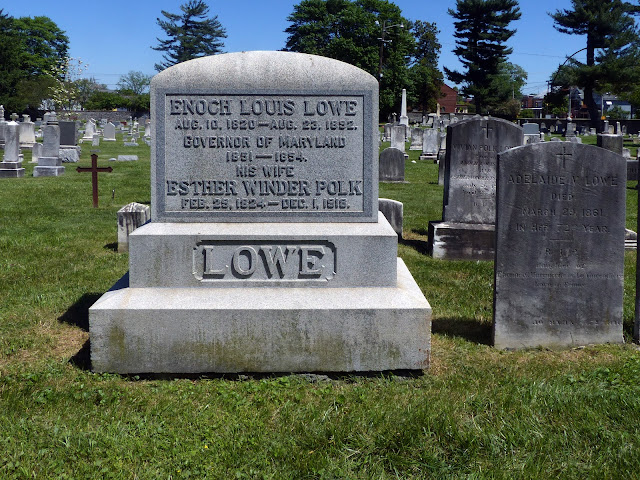