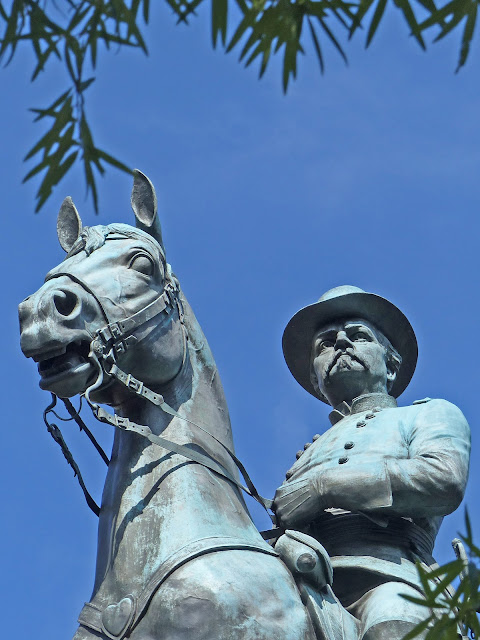 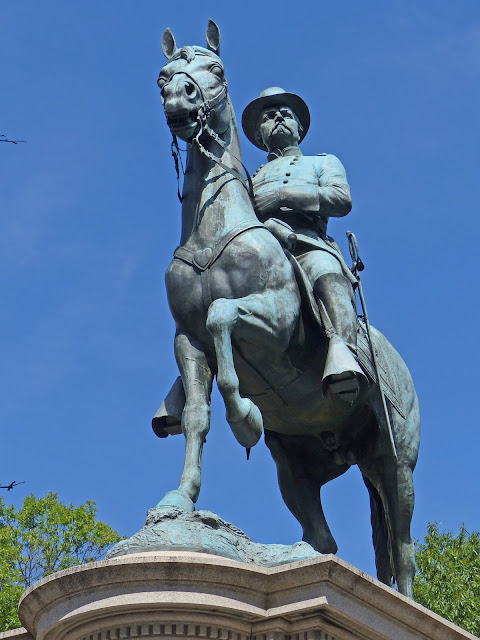 This statue of Winfield Scott Hancock by Henry Jackson Ellicott stands on the corner of 7th Street and Pennsylvania Avenue, right next to the Archives-Navy Memorial-Penn Quarter Metro station. It was commissioned in 1889 and dedicated on May 12, 1896.
SIRIS fills us in on Winfield S. Hancock and the statue.

After graduating from West Point in 1844 and serving in the Mexican War, Winfield Scott Hancock (1824-1886) went on to military fame during the Civil War. At the Battle of Gettysburg, he was shot off his horse, but continued to command his Union troops and eventually defeated the Confederate army's attack. He later ran for president in the election of 1880, but lost to James Garfield by 10,000 votes. Hancock was named for another military hero, Winfield Scott, though they are not related to each other. 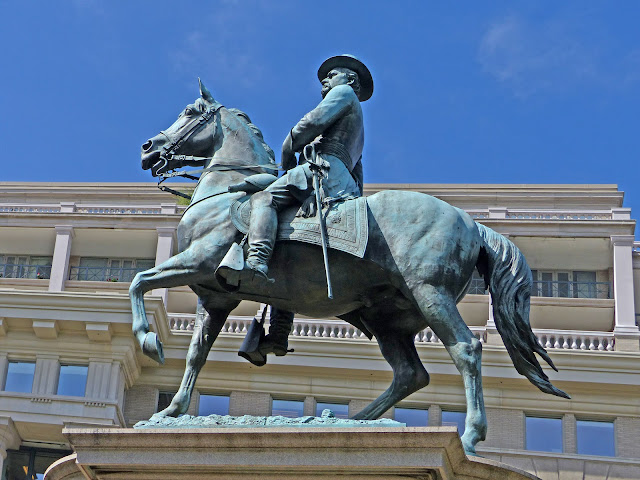 The inscriptions are minimal. One side of the base has General Hancock's name. 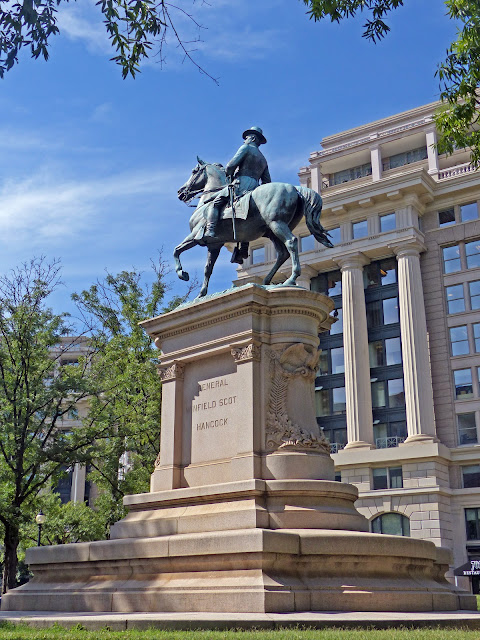 The other side gives his dates of birth and death. 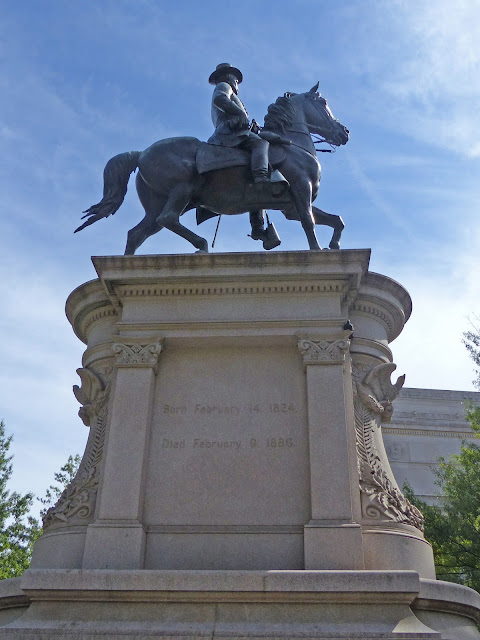 The Library of Congress has this 1905 panoramic postcard by the Rotograph Company showing Pennsylvania Ave. and the Hancock Monument.

And Carol Highsmith took this panoramic view sometime between 1980 and 2006.

A newspaper article describing the dedication of the monument, says that “The statue is an imposing bronze, representing General Hancock on the morning of the last day at Gettysburg, just before he was severely wounded.” A. R. Waud drew  this contemporary sketch of Hancock at Gettysburg. 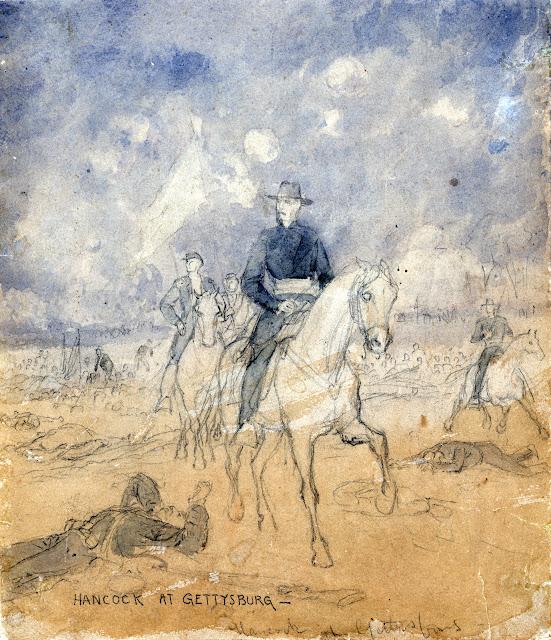 A similar equestrian tribute to Hancock appears on the  Battlefield at Gettysburg on Cemetery Hill where Hancock rallied Union forces on July 1, 1861. 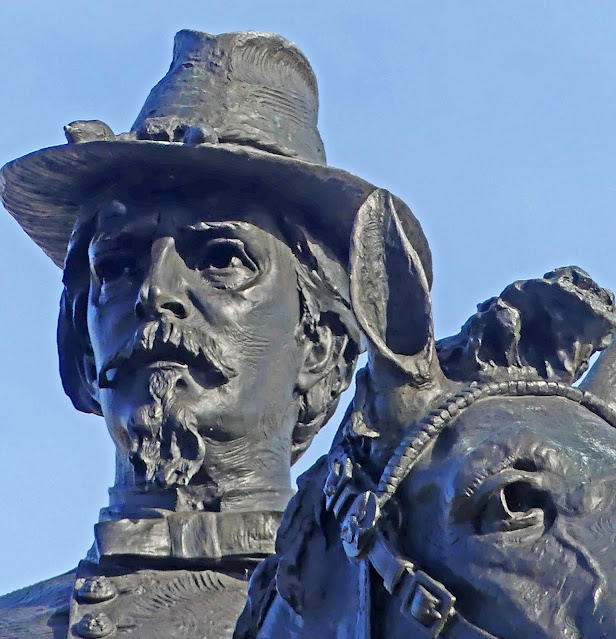 Frank Edwin Elwell's statue of Hancock was dedicated on June 5, 1896, a little more than a month after Ellicott's statue in Washington. When I found it in 2019 it was being restored. 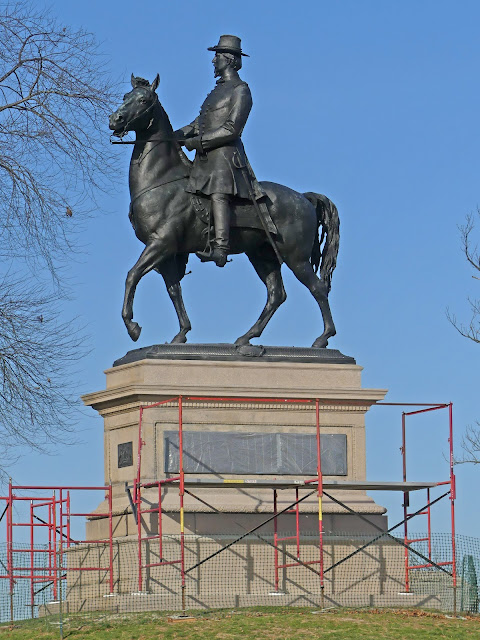 A 1995 32¢ postage stamp also shows Hancock on horseback at Gettysburg. 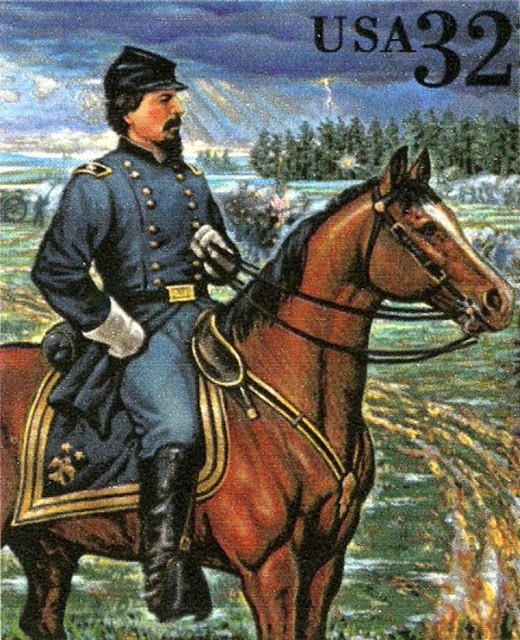 The portrait below from a photo “taken in war time or soon after” appeared in The Century in May 1886. 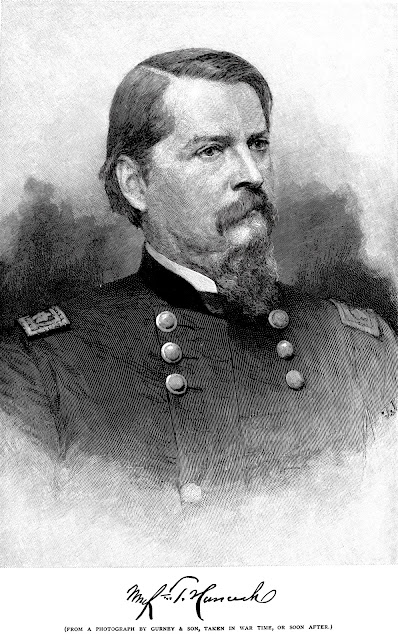 In 1880, Hancock ran as a Democrat for President. This rather un-flattering portrait of him was used in the campaign. (LOC) 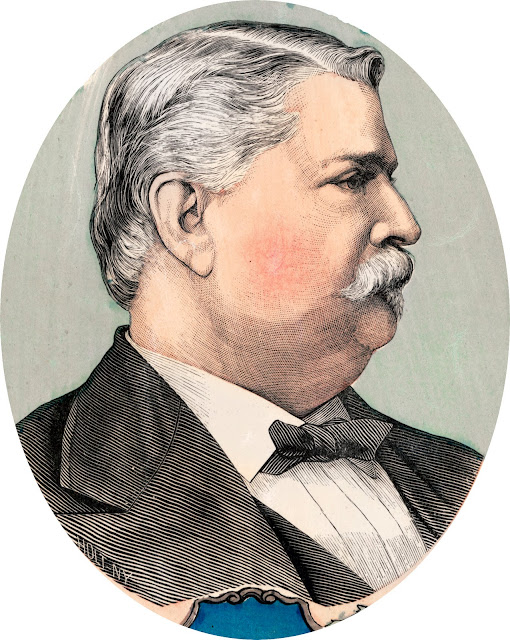 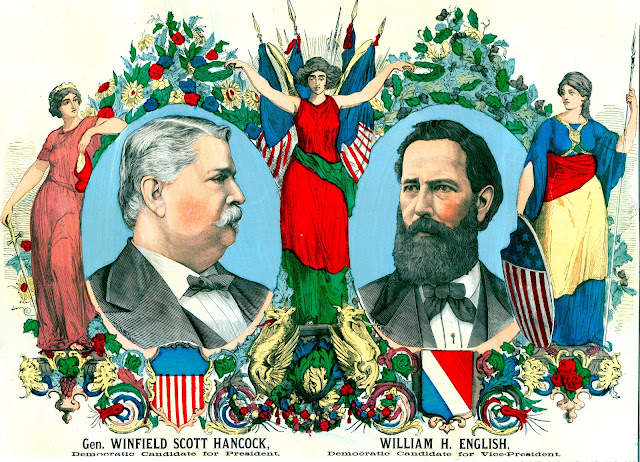 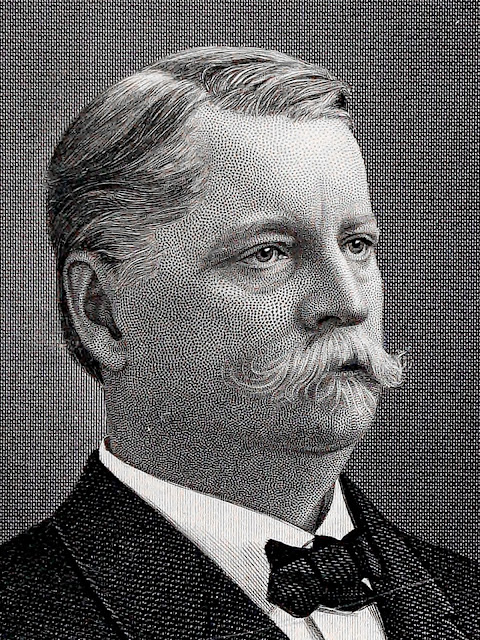 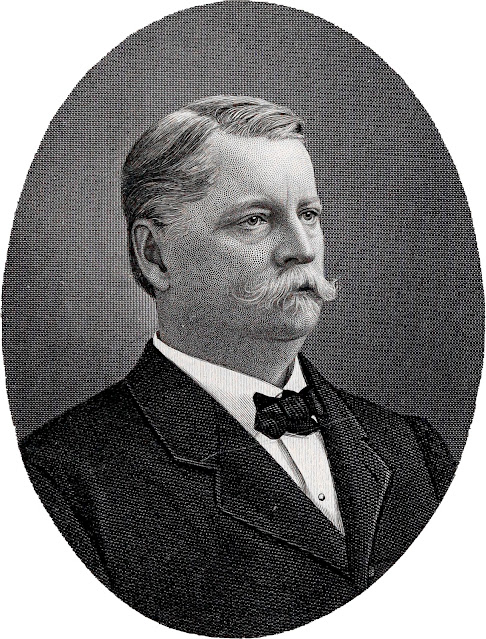 Courier and Ives depict Hancock,  in 19th century fashion,  as “The Bird to Bet On!” 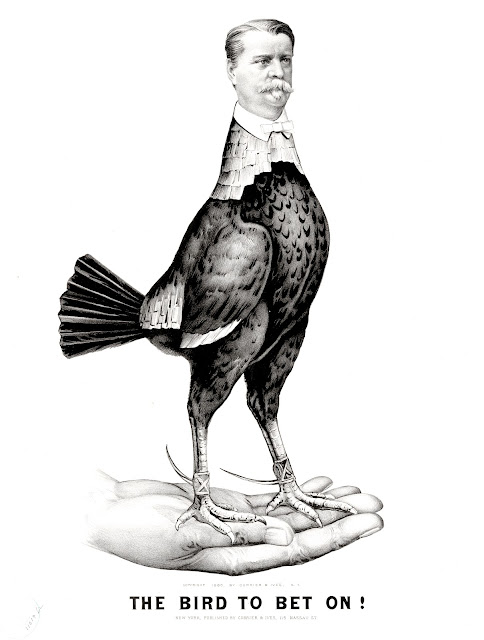 Of course, James Garfield won that election. The popular vote was 4,446,158 to 4,444,260, placing Garfield ahead by 0.1%. The candidates won 19 states each. But the electoral college went 214 to 155 in favor of Garfield.
The Topeka State Journal in 1904 carried this picture of Mrs. Hancock waking her husband the  morning after election day to inform him that “It has been a complete Waterloo for you General.” Hancock is reported to have replied “All right, dear,” and gone back to sleep. 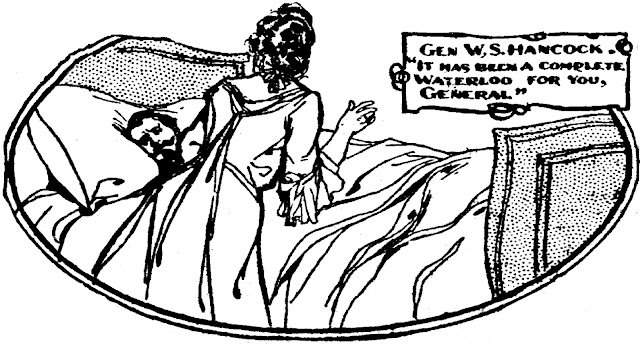 Mrs. Hancock  herself, writes that he replied “That is all right, I can stand it.”
General Hancock died in February of 1886 on Governor's Island.  Later the same year, he appeared on the new small denomination Silver Certificates. The image below is from a $2 Silver Certificate. 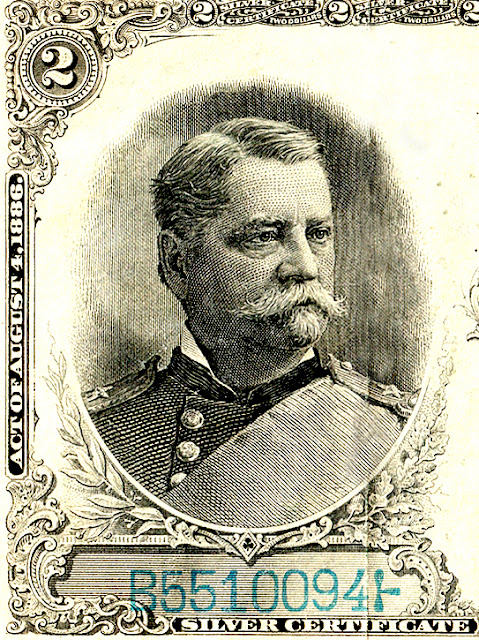 Mrs. Hancock ended her Reminiscences with a poem by Miss Irving.

“Came an angel in the morning,

When the tides go out to sea,

Saying, ‘There is one among you

That must rise and go with me.’

To the sound of lamentation,

From the Fort of Castle Williams

“To the starry cluster beaming

In the blue midnight skies.

Ancients say a star is added

When a gallant soldier dies;

And amid the evening ether.

When the guns of sunset roll,

O'er the Fort of Castle Williams 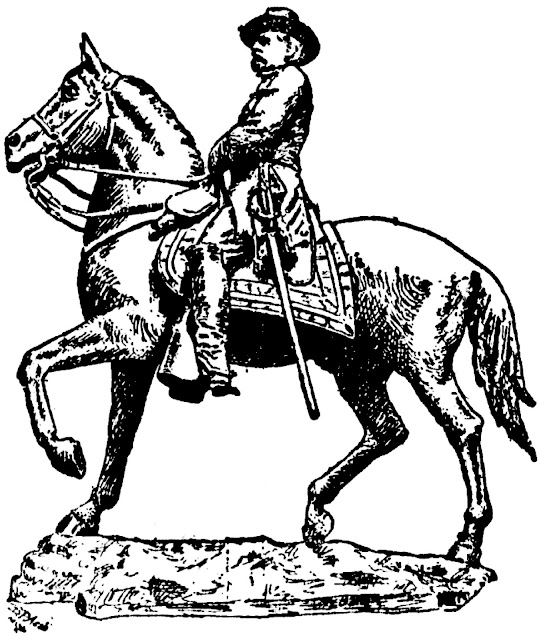