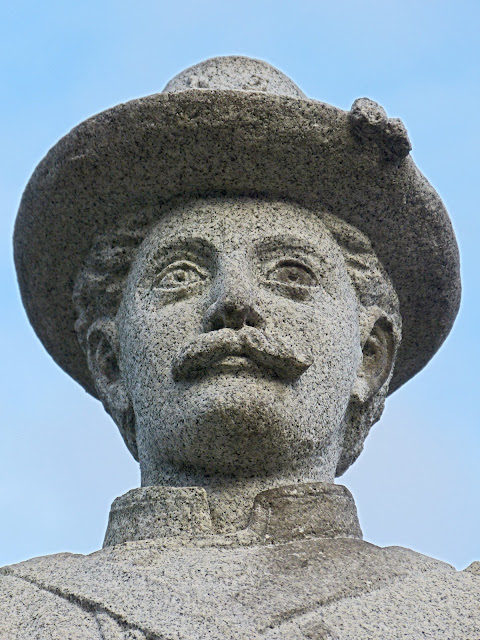 This 1914 statue by McGibbon and Curry stands atop a monument to the 25th New York Cavalry in Battleground National Cemetery in Washington, DC. 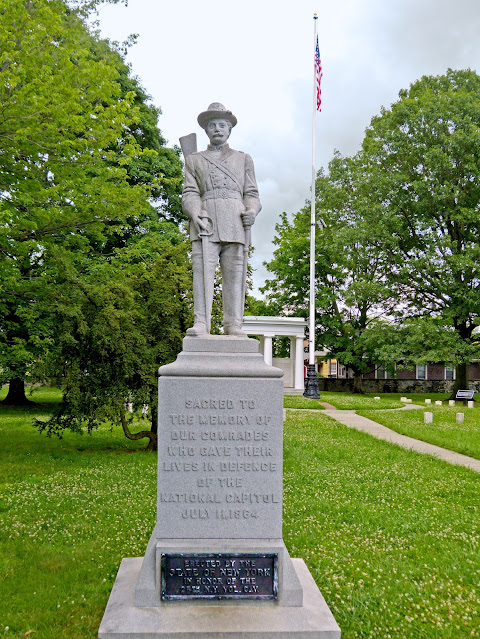 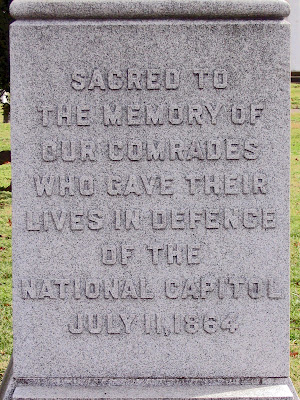 Sacred to
The Memory of
Our Comrades
Who Gave Their
Lives in Defence
of the
National Capital
July 11, 1864. 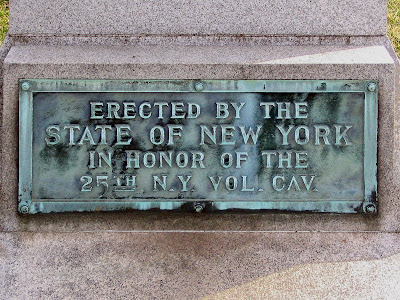 Erected by the
State of New York
In Honor of the
25th N.Y. Vol. Cav.
The 25th NY, known as “Sickle's Cavalry” was organized, company by company, at Saratoga Springs and Hart Island in New York Harbor between March and October of 1864. As each company was organized, they were sent to the defenses of Washington where they served until June of 1864, when they moved to the Army of the Potomac Provost Guard. In August they returned to the defenses of Washington and served at Fort Stevens during the battle on August 11-12, 1864. “At Fort Stevens, members of the 25th New York Cavalry and Company K of the 150th Ohio Volunteer Infantry were manning the guns, lining the rifle pits and were spread out along the skirmish line” — HALS DC-39. For a short unit history see  Dyer's Compendium, 1908, Phisterer's New York in War of the Rebellion, 1912 or The Union Army, 1908. 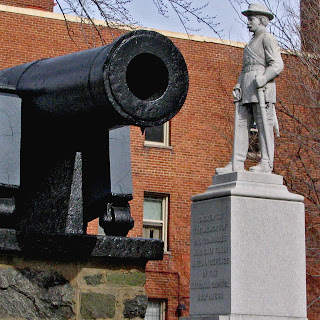 The 25th suffered 12 casualties in the defense of Washington, July 11-12, 1864; seven enlisted men were wounded and recovered from their wounds; five enlisted men were killed.  The Battleground Cemetery contains the graves of forty men who died in the Battle of Fort Stevens, five of whom are from the 25th New York — Privates Elijah Hufletin, William Frei (Tray) and Jeremiah Maloney as well as Sergeants Alfred C. Starbird and Thomas Richardson. 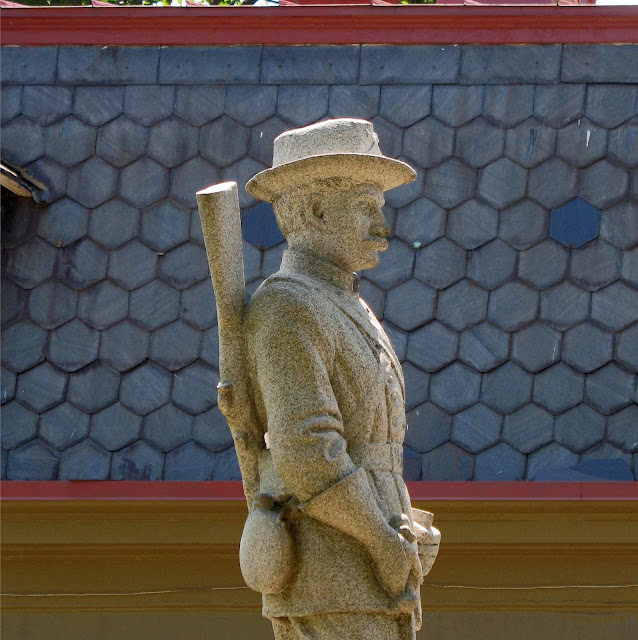 The 25th remained in the defenses of Washington until August of 1864 when they were sent to the Army of the Shenandoah. They mustered out at the end of war on June 27, 1865. 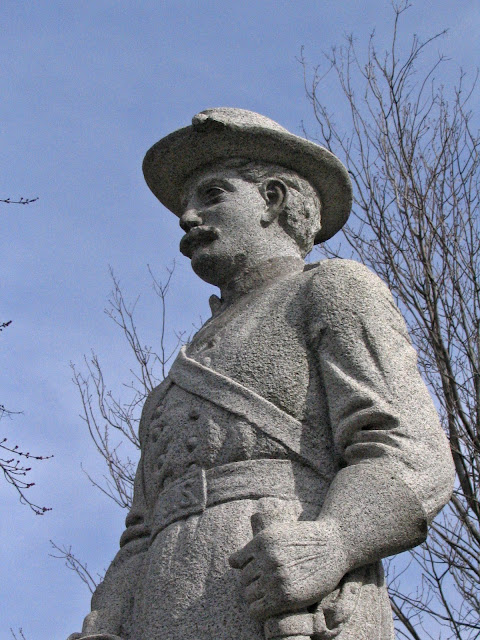 Monument to Twenty-Fifth New York
Volunteer Cavalry to Be Dedicated
at Battle Cemetery July 11.
The monument didn't arrive in time and the dedication had to be postponed until September 19th, 1914.  See Memorial Dedication Necessarily Delayed in The Washington Evening Star, July 10, 1914.   The Star ran this photo of the actual monument on September 19th.
Monument to the 25th New York Volunteer Cavalry,
who Defended Capital in 1864. 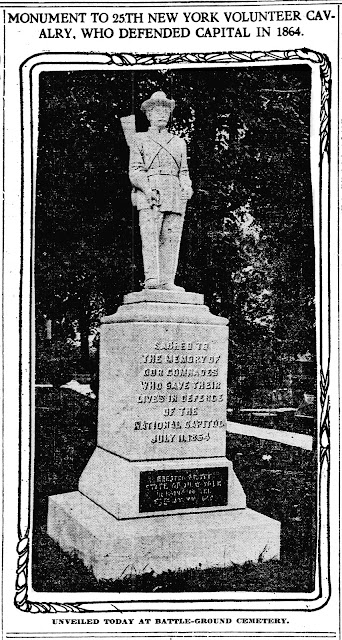 Unveiled at Battle-Ground Cemetery.
The article entitled Monument To Capital Savers included a poem by Dr. Thomas Calver entitled That Thin, Blue Skirmish Line, read by its author at the dedication. The statue was unveiled by John Ashton Wolff whose grandfather John H. Wolff fought at Fort Stevens as a member of the 25th NY, came to live near the Battleground Cemetery and was one of the leaders of the effort to build the memorial. 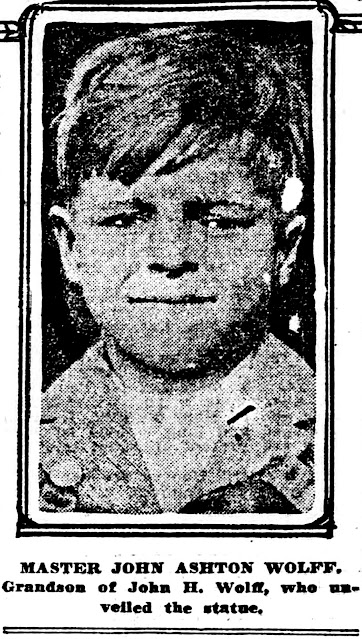 Master John Ashton Wolff
Grandson of John H. Wolff, who
unveiled the statue.
The photo above as well as the one below appeared in the Washington Star on the Sunday following the dedication.
Participants in the Unveiling of Soldiers' Monument at Battle-Ground Cemetery. 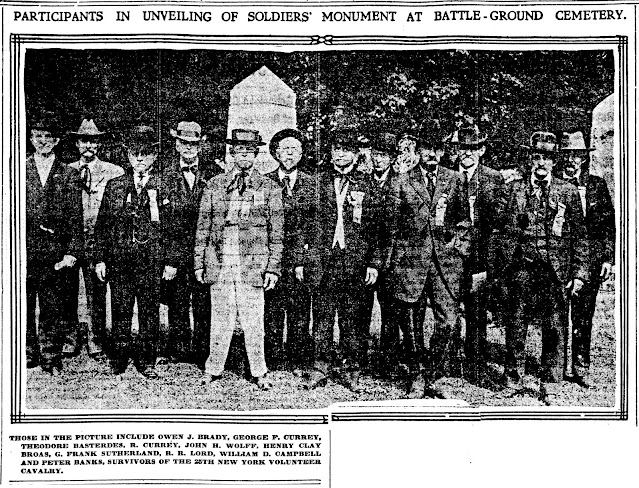 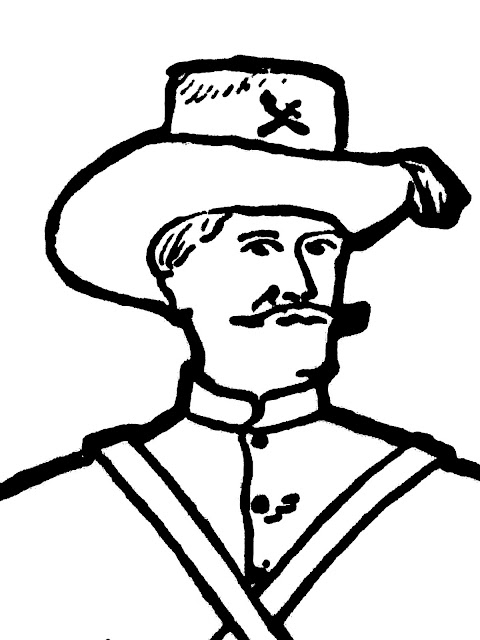