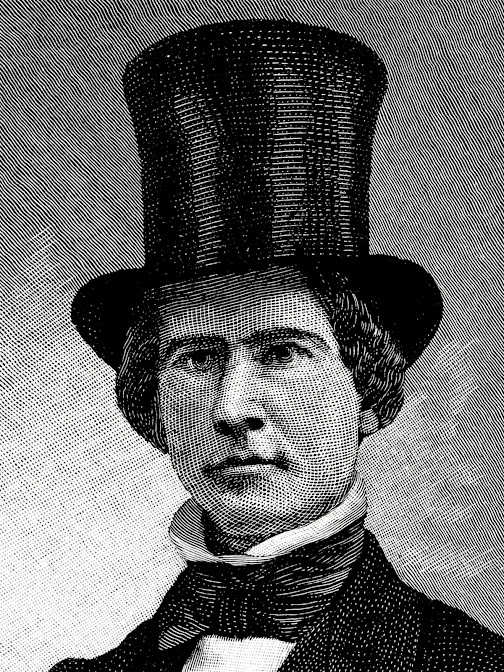 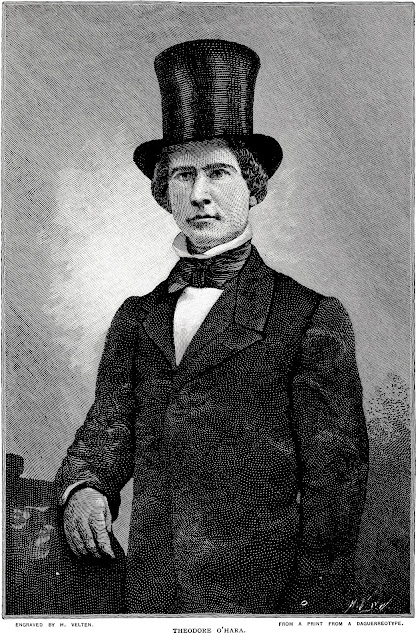 This engraving of Theodore O'Hara by H. Velten, “From a Print from a Daguerreotype,” appeared in The Century Magazine, Vol. 40, No.1 (May 1890) pp. 106-10,  in an article by Robert Burns Wilson. Poet, soldier, journalist, lawyer and  filibuster, O'Hara is mainly remembered as the author of the poem "Bivouac of the Dead."
The Kentucky Historical Society has this photo apparently the precursor to Velten's engraving. It appeared in The Register, 105(4), page 574. 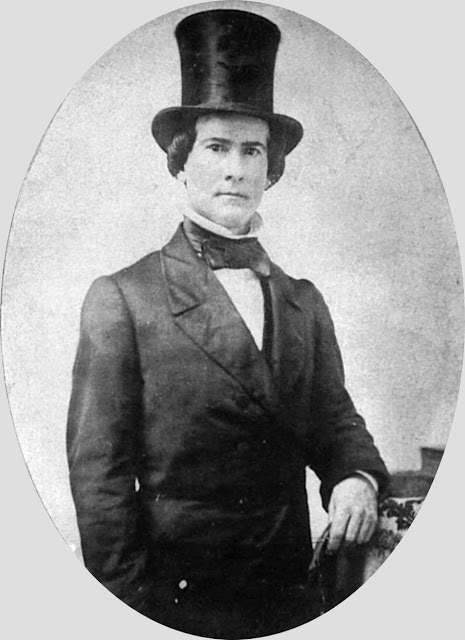 This top-hatless engraving of O'Hara by A. Leese and Co., appeared in the Southern Bivouac in 1887. 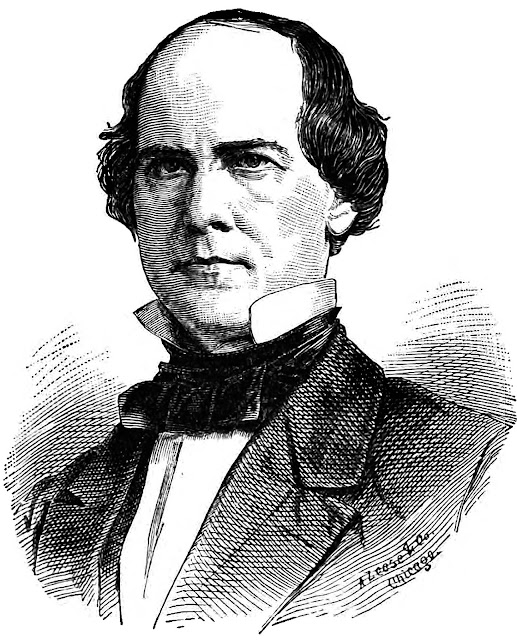 Perhaps it was based on the photo below which appeared in  George Washington Ranck's 1898 biography, The Bivouac of the Dead and Its Author. 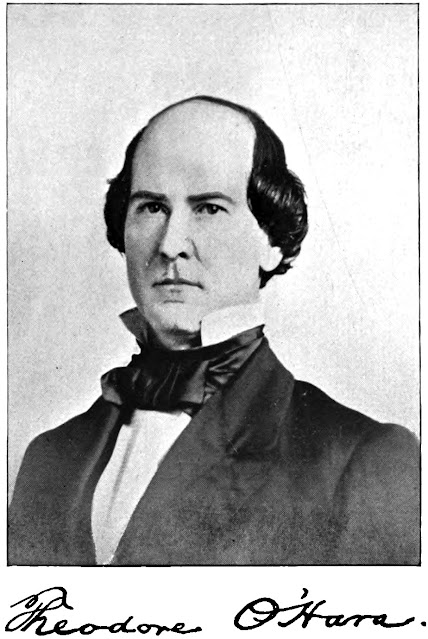 He was commissioned captain in the U.S. army and appointed assistant quartermaster of volunteers, June 26, 1846. He served on the staff of General Franklin Pierce, and was brevetted major, Aug. 20, 1847, for gallant and meritorious conduct in the battles of Contreras and Churubusco. 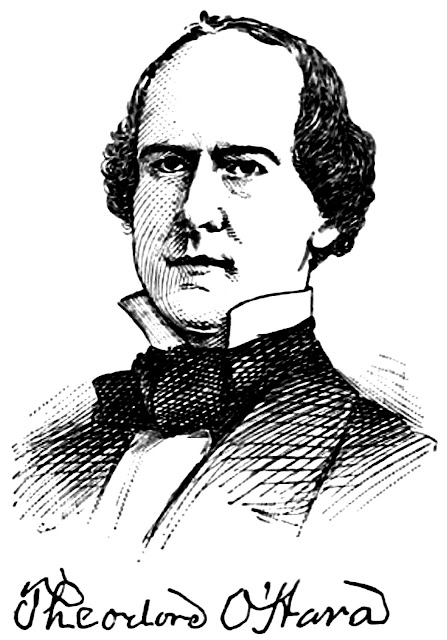 After practicing law in Washington DC and editing the Louisville Ky. Times and Sun ,  he joined an 1851 filibustering expedition to Cuba.

He was employed by the Tehuantepec railroad company and met Narcisso Lopez, the Cuban liberator, in Mexico, from whom he accepted the commission of colonel. He joined the first Cuban expedition in 1851, and commanded a regiment at the battle of Cardenas, where he was severely wounded and compelled to return to the United States.

In another freebooting adventure he joined Walker in his invasion of Nicaragua.

He assisted Col. William Walker in the organization of his expedition to Central America, and while trying to escape the vigilance of the U.S. authorities, was arrested and indicted with General Henderson at New Orleans, charged with violating the neutrality laws, but the government failed in the prosecution.

Back in the army as a captain, in 1856, on the Texas frontier, O'Hara was brought up on charges of drunkenness by Lt. Col. Robert E. Lee and resigned.
He served in the confederate army in the Civil War.

He entered the Confederate army in 1861, and was soon after commissioned captain and placed in command of Fort McRea, at the entrance of Mobile Bay, which he defended until ordered to evacuate. He became colonel of the 12th Alabama regiment, and served at Shiloh on the staff of Gen. Albert Sidney Johnston, and then on the staff of Gen. John C. Breckinridge.

"Bivouac of the Dead" is O'Hara's homage to his fallen comrades of the Mexican War. He may have presented the poem at the Frankfort Cemetery as early as 1847 when John C. Breckenridge spoke there or the first presentation may have been in 1850 in the same cemetery. J. A. Du Puy, in 1913, says the first reading was in a saloon in Frankfort.

O'Hara was asked by the Governor of Kentucky to write and read a poem upon the occasion of the burial of these, his comrades. In the office of the Yeoman in Frankfort, the lines that now are scattered throughout were penned. In a little saloon across the street from the statehouse they were first read and the auditors were former comrades at arms and young bloods there assembled. Those who heard pronounced the poem good and on the following day this, the greatest poem of its kind ever written, was read over the remains of the Kentucky soldiers who had died in Mexico. -- J. A. Dupuy

The poem was first published in the Frankfort Yeoman in 1850. It was picked up by the Washington DC Southern Press on December 12, 1850, under the title “The Burial of the Buena Vista Heroes in the Frankfort Cemetery.”

O'Hara's biographer George W. Ranck gives us this interpretation of Glory guarding with solemn round the bivouac of the dead. 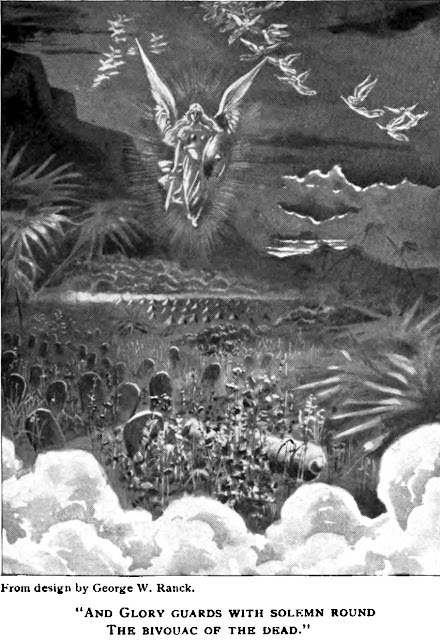 “And Glory Guards with Solemn Round
The Bivouac of the Dead.”

The inspiration for the poem was the dedication of this monument in Frankfort Cemetery. 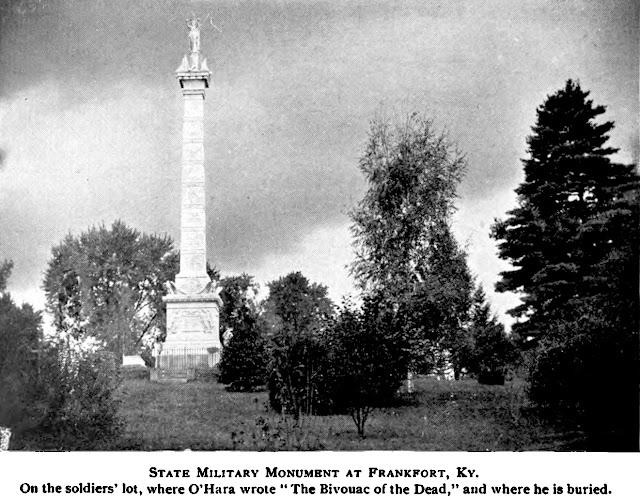 State Military Monument at Frankfort, Ky.
On the soldier's lot, where O'Hara wrote “The Bivouac of the Dead,” and where he is buried.
(from Ranck, 1898.)

“Bivouac of The Dead” made Theodore O'Hara, “The bard of Memorial day, The poet of the national cemeteries.” W. A. Du Puy writes in the Washington Star,  May 25, 1913:

The bard of Memorial day, The poet of the national cemeteries, is Theodore O'Hara. The federal government has so designated him. In every national cemetery, from Arlington, Va., to Custer's battlefield, Montana, and back again to where the fighting men of the United States sleep, in the city of Mexico, are to be read the couplets of this poet, placed there by the government. For, in all these cemeteries, Uncle Sam has sought to place tablets that express most adequately the reverence of those who survive for the heroes who have died in battle. And, searching the whole world of literature, he found no poem that so far outshone all else that all the tablets in all the cemeteries contain lines from that poem and nothing else.

Here's one of those iron tablets in the Battleground Cemetery in Washington, DC. 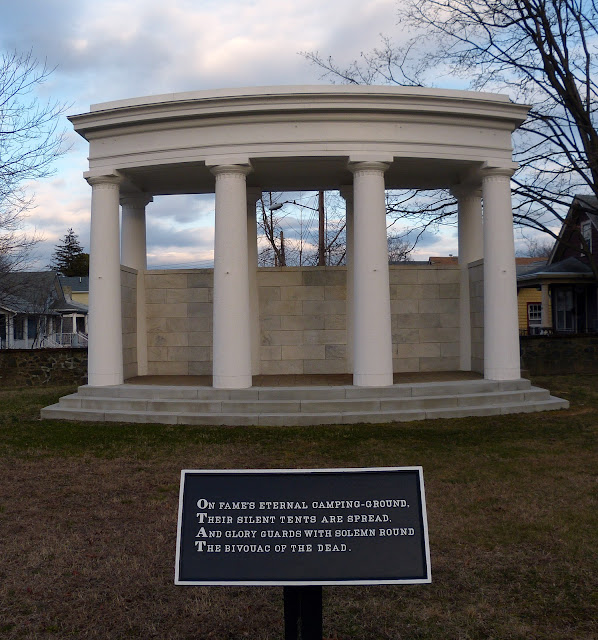 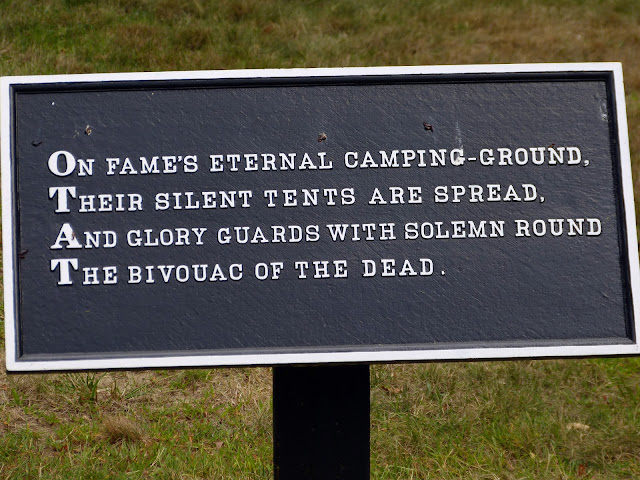 The same verse appears on the monument to the “Unknown and Unrecorded” Confederate dead at Winchester National Cemetery. 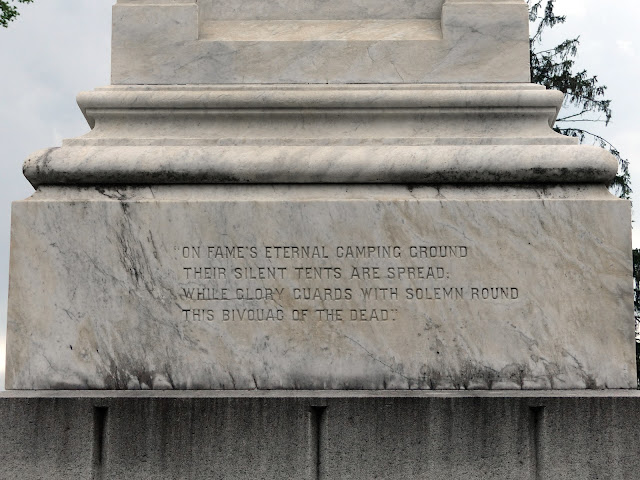 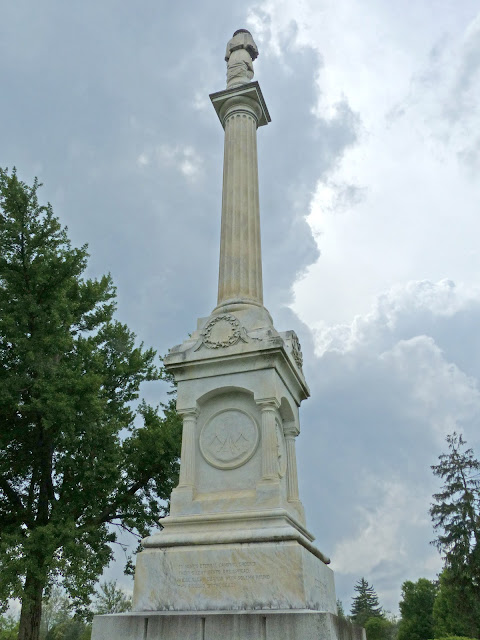 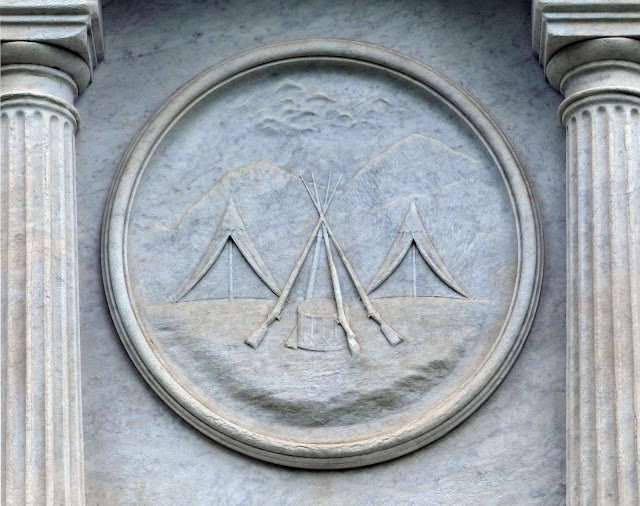 The Bivouac of the Dead
Rossiter Johnson also in the May '90 issue of The Century, complains that “The Bivouac of the Dead” “lacks all moral character” because it takes no position on what the dead were fighting for or against and  he suggests other martial epitaphs taken from other poems. But it is the neutrality of “The Bivouac of the Dead” that made it suitable for both Union and Confederate graves in the post Civil War reconciliation era.
A 1921 History of the Frankfort Cemetery by Lewis Franklin Johnson, locates O'Hara's grave this way.

On the military mound south of the State monument is the tomb of a soldier, editor, lawyer and poet, with the simple inscription of  “Theodore O’Hara, Major A. D. C. ; died June the 8th, 1867,” and of recent date there has been added the further inscription “Author of the Bivouac of the Dead.” No other poem has ever been written that can stir to such depth the martial spirit of Kentuckians.

O'Hara was originally buried in Georgia. When a movement arose to repatriate his remains to Kentucky, Captain J. S. Van de Graaf  wrote a poem entitled “Bring Back the Hero's Dust.”

The Century had this image of O'Hara's gravestone. 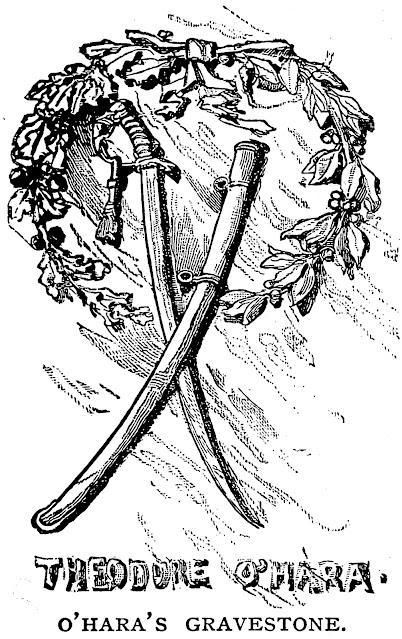 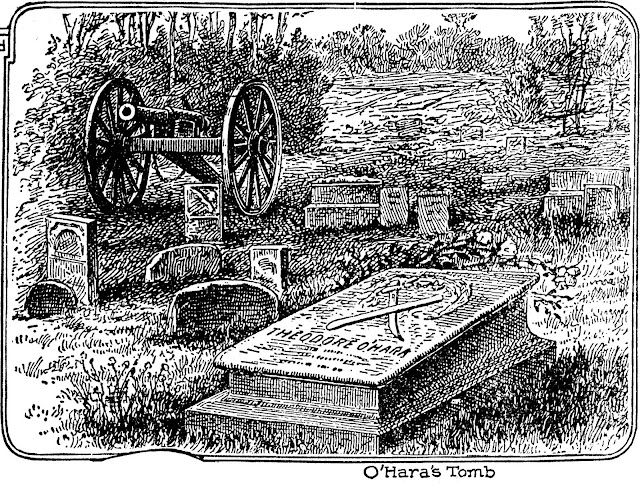 And the Century illustrates it's relation to the Soldiers' Monument. 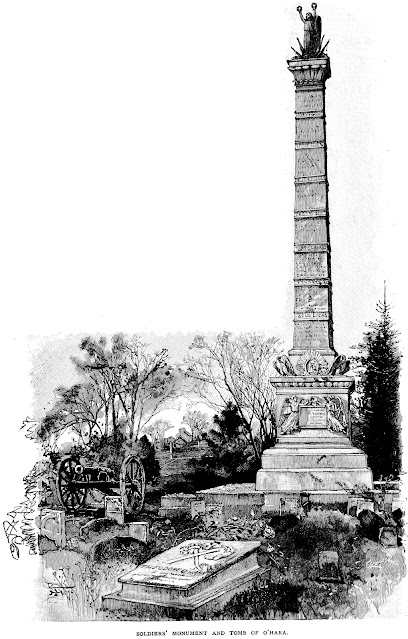 Soldier's Monument and Tomb of OHara.
The words “Author of  the immortal poem ‘Bivouac of the Dead’” were added to the tomb in 1913 by the Kentucky Historical Society.

On October 30th, 1913, the Kentucky Historical Society erected a tablet, designed by the New Muldoon Monument Company, with verses from “Bivouac of the Dead” next to the original tomb.  Mrs. Jenny Chinn Morton wrote a poem for the occasion which appeared in the Register of the Kentucky Historical Society. She provides this description of the tablet.

It is a beautiful tablet of Italian marble six feet in height, upon a granite base, which will be erected at the head of O'Hara's tomb. On the front of the stone in bas-relief is an exquisite harp; beneath it is inscribed, “Theodore 0'Hara,” and beneath his name this verse, which refers to the military monument directly in front of the tablet:

“Yon marble minstrel's voiceful stone,
In deathless song shall tell,
When many a vanished year hath flown,
The story how ye fell;
Nor wreck, nor change, nor winter's blight,
Nor time's remorseless doom,
Can dim one ray of holy light
That gilds your glorious tomb.”

Beneath this verse are the words, “Erected by the Kentucky State Historical Society;' on the reverse side-facing the Sarcophagus—at the top is a pen with a palm branch resting lightly on it, and beneath, the other two eight line stanzas:

“The muffled drum's sad roll has beat
The soldier's last tattoo;
No more on life's parade shall meet
That brave and fallen few;
On Fame's eternal camping ground
Their silent tents are spread,
And glory guards with solemn round,
The Bivouac of the Dead.

“Rest on, embalmed and sainted dead,
Dear as the blood ye gave;
No Impious footsteps here shall tread
The herbage of your grave
Nor shall your glory be forgot
While Fame her record keeps
Or Honor points the hallowed spot
Where Valor proudly sleeps.”

In 2018, Cosmos Mariner at HMdb took this photo of the 1913 tablet  with O'Hara's name and the final verse of Bivouac of the Dead on one side. 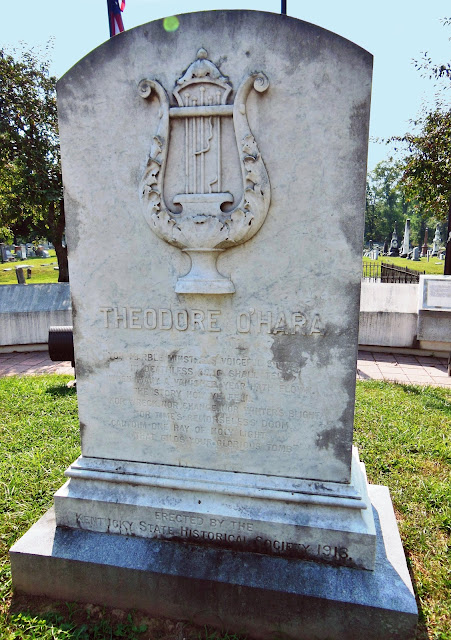 Erected by the
Kentucky State Historical Society 1913.
Notice that in this version of the poem, the stone is "voiceful," it is "voiceless" in other versions.
On the obverse of the marker are the first and the penultimate verse of the famous poem. This photo comes from Cemeteries Worth the Visit. 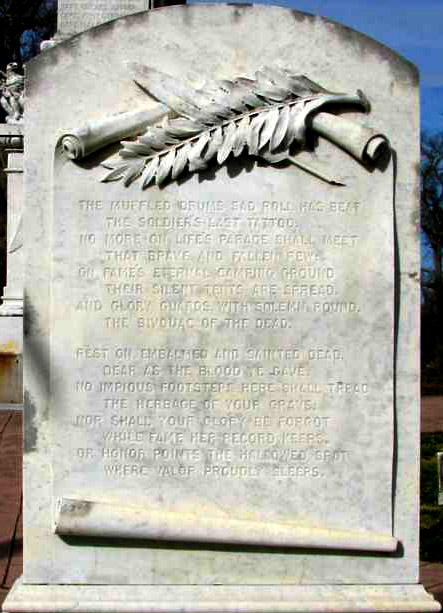 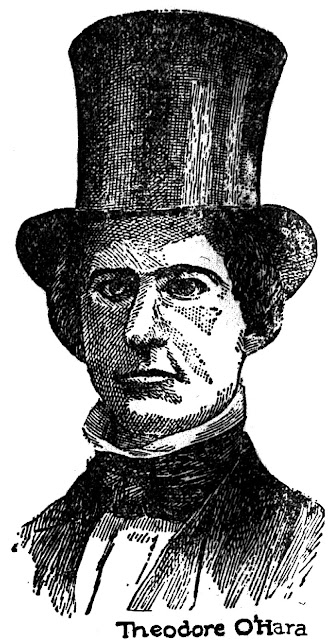 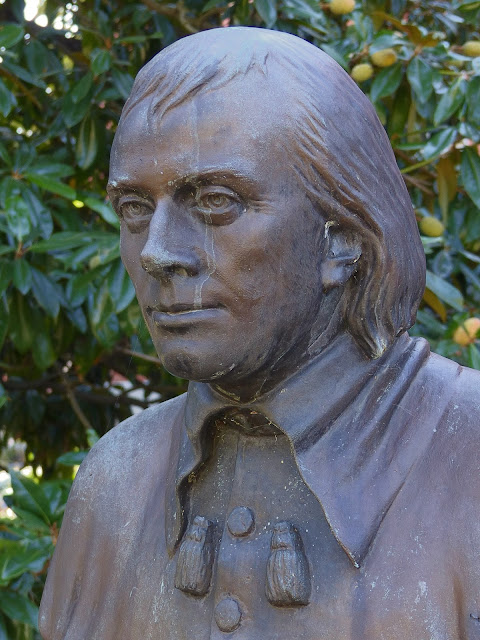