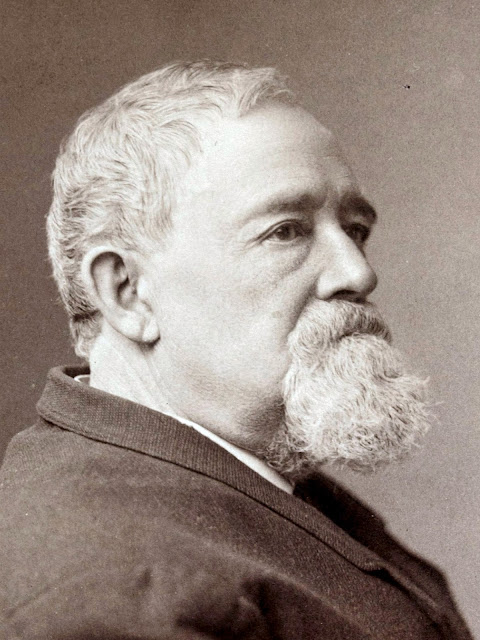 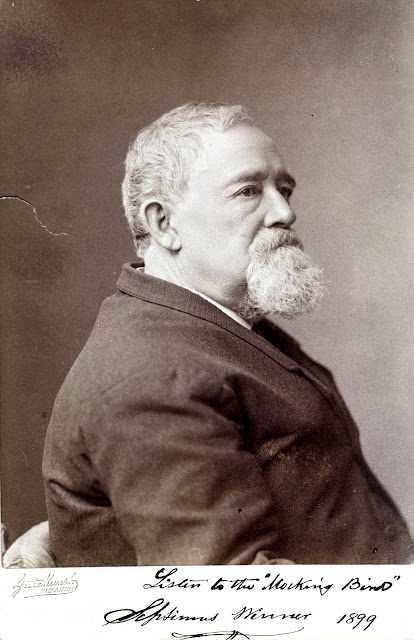 Listen to the “Mocking Bird”
Septimus Winner 1899
This 1899  carte-de-visite of Septimus “Sep” Winner by GuteKunst is in the Barrett-Sandburg Photograph Collection and can be found at Internet Archive.   As the inscription above and the caption on this 1900 newspaper cut indicate, Winner was a popular song writer most famous as the author of  “Listen to the Mocking Bird.” 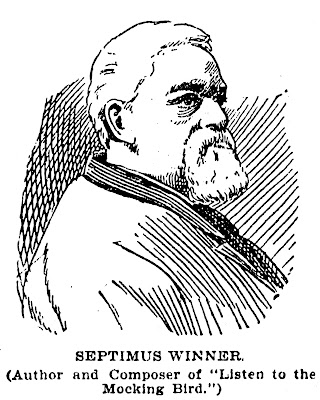 Septimus Winner
(Author and Composer of “Listen to the Mocking Bird.”)
But the 1855 sheet music only carries Winner's name as one of the publishers “Winner and Shuster.” 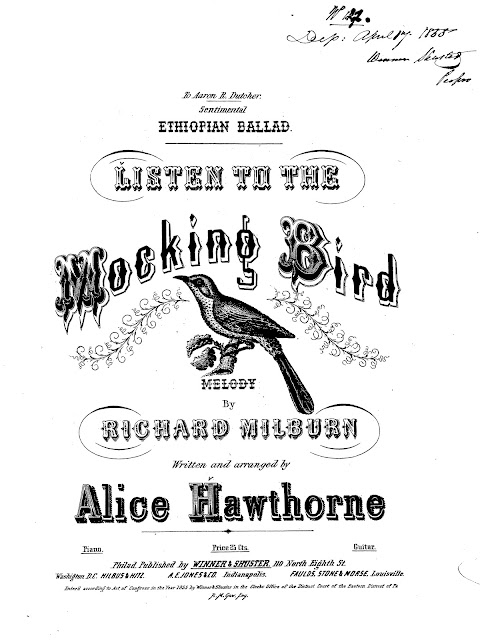 Septimus Winner wrote many songs under the pseudonym Alice Hawthorne. Hawthorne was his mother's maiden name (Mary Ann Hawthorne Winner), he also used the pseudonym Mark Mason. The modern popular consensus seems to be that the melody was as indicated above written by Richard “Whistling Dick” Milburn an African-American Philadelphia street musician. (See Ted Widmer's article in the New York Times, November 2013.) In later years, however, Winner explicitly claimed to have written the music and taught it to Milburn, having been inspired by Milburn's whistling Mockingbird imitation. An 1893 article entitled The People's Songs quotes Winner:

About this time there was a street character in Philadelphia known as Whistling Dick, an accomplishment in which he excelled, really making some beautiful music, to which he strummed an indifferent accompaniment on the guitar. One of his specialties was the imitation of a mocking bird, which suggested to me the composition of a ballad of that character, and “Listen to the Mocking Bird” was the result. It was written, to suit the small compass of Dick's whistle, to whom I taught it, and this whistling genius did much to start the song on its successful career. The song won its greatest popularity in the southern states, where it was taken up the colored people and sung far and wide. There are numerous young ladies in the United States today bearing the name “Hallie,” which was first used in this ballad. As the song was first published in the year 1855, it will be seen it is now nearly 40 years old. -- The Fairhaven Herald.

The photo below, also by Gutekunst, constitutes the frontispiece of Winner's posthumously published collection of poems,  Cogitations of a Crank, 1903. 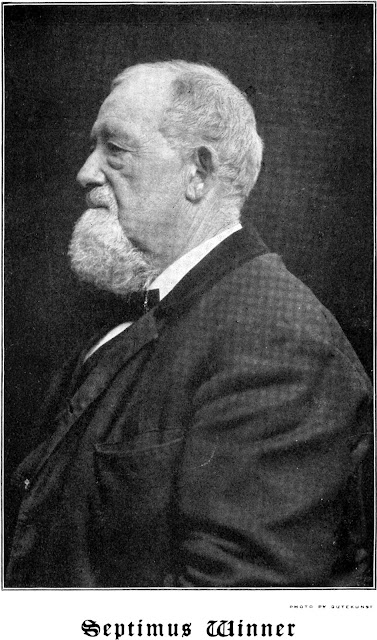 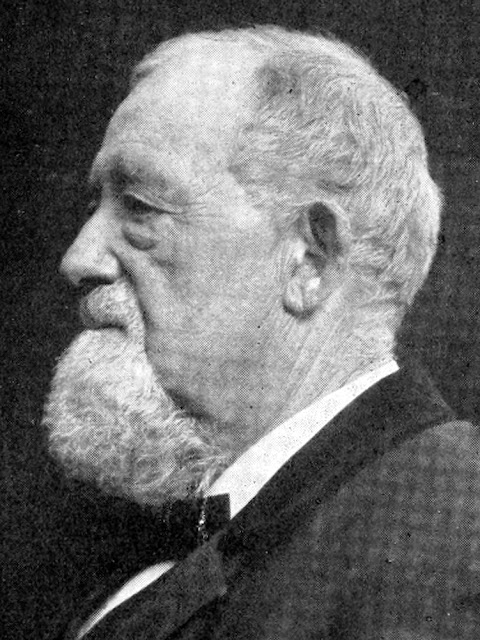 Septimus Winner Photo by GuteKunst
This photo, whose origin remains a mystery to me, shows a more youthful Sep Winner. 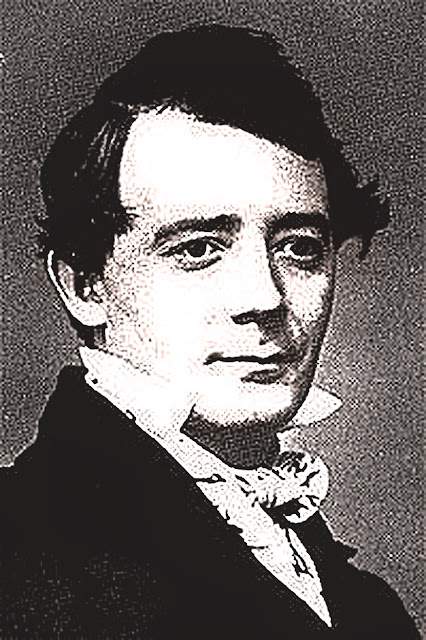 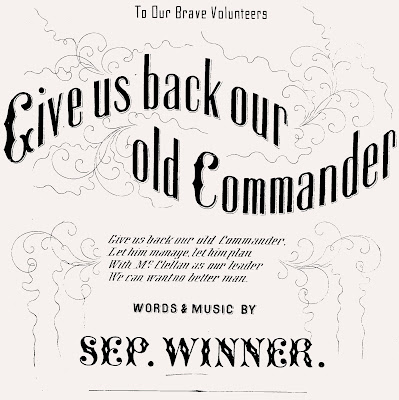 Give us back our old Commander,

Let him manage, let him plan

With McClellan as our Leader

We can want no better man.

This placed Winner on the wrong side of the Lincoln administration and Secretary of War Edwin M. Stanton in particular. John Hix encapsulates the story in a 1938 cartoon. 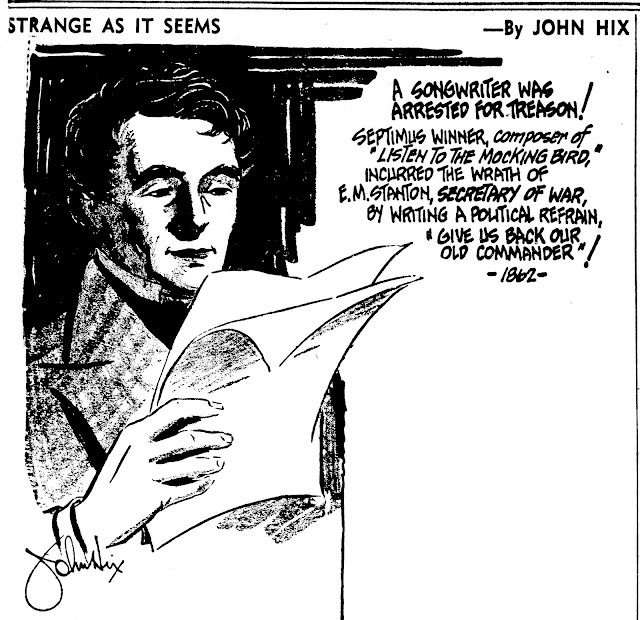 It is unclear whether Winner was actually arrested or simply warned that continuing to sell the sheet music to this song, -- He is reputed to have sold 50,000 copies, in Washington alone -- would result in his imprisonment. Performers including Julia Mortimer who was singing  “Give Us Back Our Old Commander” on stage at Fords Theater, were warned that continuing to perform the song would be punished with imprisonment. The Library of Congress says that:

During the Civil War, he composed Give Us Back Our Old Commander: Little Mac, the People's Pride. It was intended as an appeal to President Abraham Lincoln to return Union General George McClellan to service. The song sold eighty thousand copies within a few days. It was branded anti-Union, however, and in 1862, Winner was court-martialed and jailed on a charge of treason. The charge was dropped after he agreed to destroy all remaining copies of the song. Shortly after Winner's release, he composed the popular Oh Where, Oh Where Has My Little Dog Gone, set to the German folk-song melody, Lauterbach. -- LOC

Der Dietcher's Dog better known by its first line, “Oh Where, Oh Where Has My Little Dog Gone?” is a much darker piece than we all remember. It makes fun of German-Americans, and worse... the little dog ends up in the sausage!
By the turn of the century, Winner's fame had faded. Newspaper articles appeared with such headlines as Author of “Listen to the Mocking Bird” and Other Well Known Songs Is Still Alive.  and Little Known to the World, Although His Music Has been Sung by Thousands—Hale and Hearty at 74. He died of a heart attack on November 22, 1902 at age 75 and is buried in West Laurel Hill Cemetery Bala Cynwyd, Montgomery County, Pennsylvania. This photo was submitted to Find-a-Grave by Thomas Fisher. 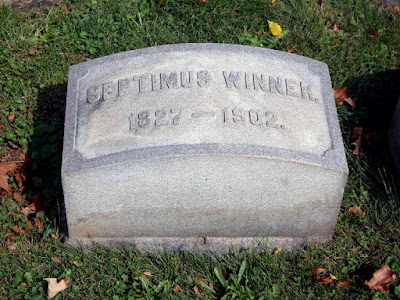 Septimus Winner.
1827-1902
Septimus Winner was inducted into the Songwriters Hall of Fame, in 1970. They give us this incomplete song list.

HOW SWEET ARE THE ROSES

LISTEN TO THE MOCKING BIRD

LITTLE CHURCH AROUND THE CORNER, THE

OH WHERE, OH WHERE HAS MY LITTLE DOG GONE?

TAKE ME MOTHER IN THY LAP

So I guess we can all agree “This Man Wrote Many Popular Songs.” 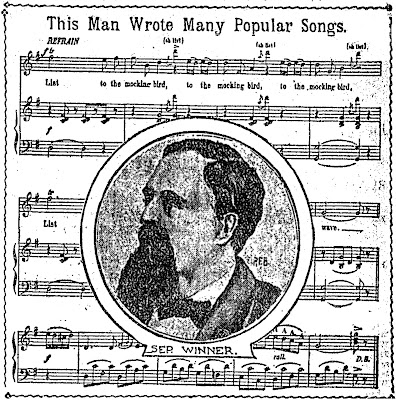 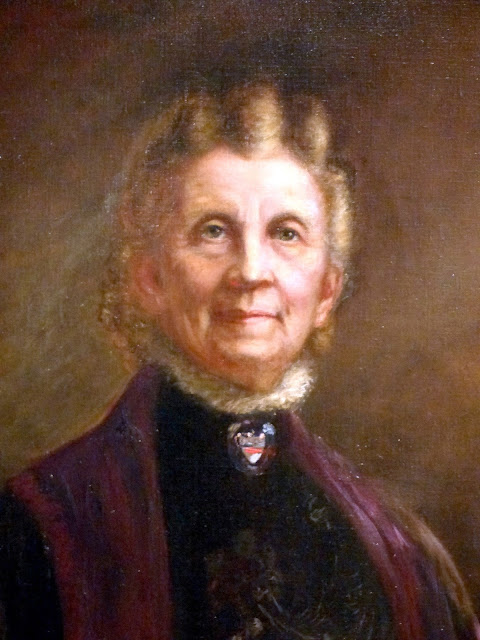