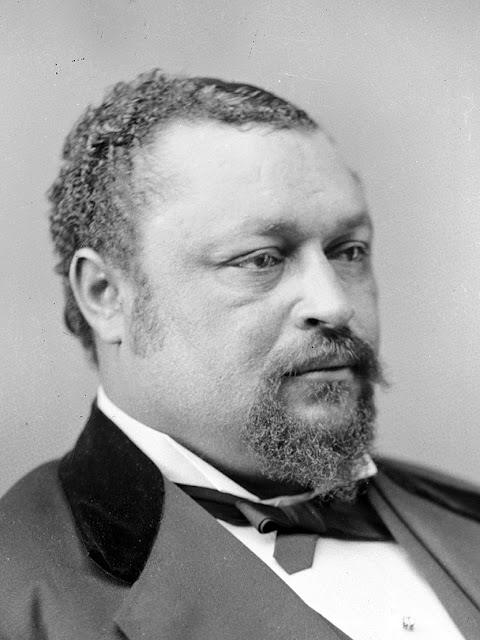 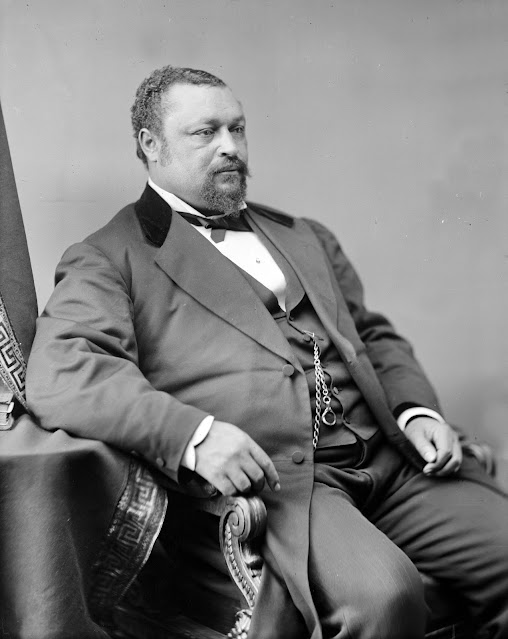 This photo of Hon. Blanche Kelso Bruce of Mississippi belongs to the Brady Handy collection at the Library of Congress. The library describes Bruce as  an “African American legislator”.

Booker T. Washington described Blanche K. Bruce this way in his 1900 book The Future of the American Negro.

I might name several characters who were brought before the world by reason of the reconstruction period. I give one as an example of others:  Hon. Blanche K. Bruce, who had been a slave, but who held many honourable positions in the State of Mississippi, including an election to the United States Senate, where he served a full term; later he was twice appointed Register of the United States Treasury. In all these positions Mr. Bruce gave the greatest satisfaction, and not a single whisper of dishonesty or incompetency has ever been heard against him. During the period of his public life he was brought into active and daily contact with Northern and Southern white people, all of whom speak of him in the highest measure of respect and confidence.

Blanche Bruce was one of two reconstruction-era African American U.S. Senators. The first was Hiram Revels who was sent in 1870 to fill one of the vacancies in the Senate left open since 1861. His term expired in March 1871.  Bruce was elected by the Mississippi legislature in 1874 and served from 1875 to 1881. He is often described as the First African American to serve a complete term in the Senate.  His 2001 senate portrait by Simmie Knox was commissioned in 1999.
As senator, Bruce advanced a bill to desegregate the army. He spoke and voted against the Chinese Exclusion Act. 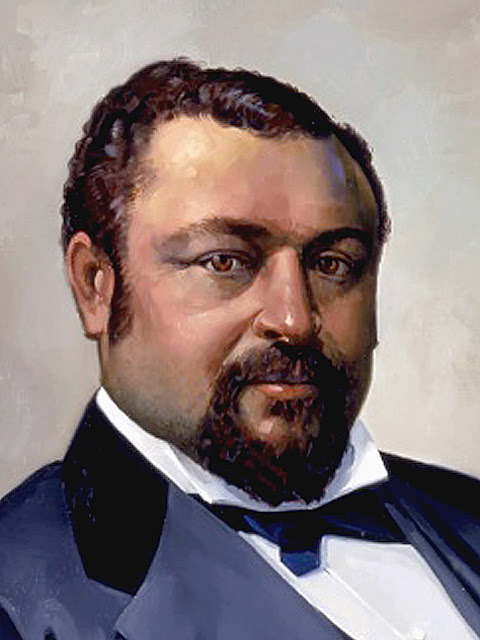 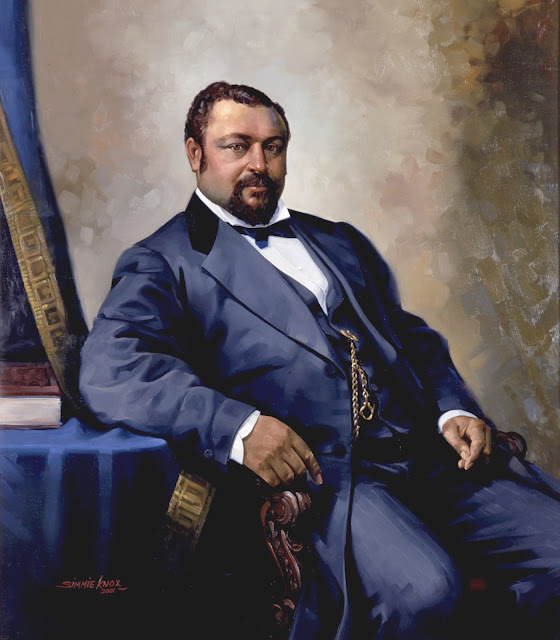 Blanche Bruce was born enslaved in Farmville Virginia. This historical marker is on Rt. 360 in Green Bay Virginia. (photo by Bernard Fisher.) 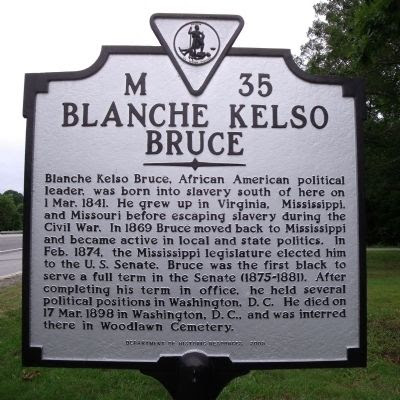 M 35
Blanche Kelso Bruce
Blanche Kelso Bruce, African American political leader, was born into slavery south of here on 1 Mar. 1841. He grew up in Virginia, Mississippi, and Missouri before escaping slavery during the Civil War. In 1869 Bruce moved back to Mississippi and became active in local and state politics. In Feb. 1874, the Mississippi legislature elected him to the U.S. Senate. Bruce was the first black to serve a full term in the Senate (1875-1881). After completing his term in office, he held several political positions in Washington, D.C. He died on 17 Mar. 1898 in Washington, D.C., and was interred there in Woodlawn Cemetery.

Bruce somehow acquired both education and aristocratic manners. Many sources point out that he was assigned to his master's son as companion and was educated by the son's tutor. It is alleged that Blanche Bruce may have been the natural son of Pettus Perkinson, his master, and he may have therefore received special favor from Perkinson.
He inherited the name Bruce from his mother, Polly, who had belonged to the Bruce family from which Mrs. (Rebecca) Perkinson came. The Concise Britannica Encyclopedia says that “Born to a slave mother and a white father, he was educated by his father”.  The House of Representatives web-site says that:

Bruce’s first name was originally “Branch,” but he changed it to “Blanche” as a teenager. For unexplained reasons, he later adopted the middle name “Kelso.”

The St. Paul Globe, in 1887, tells the story differently:

It was forty-six years ago the first of March, 1841, when he was born and received the singular name which he has clung to although frequently importuned to change it to something that had more of the ring of masculinity about it. An old friend of his mother's was visiting the family prior to his appearance in this mundane sphere, and as her name was Blanche, it was decided that the baby should he called after her. Contrary to expectation, however, it was a boy child, but Mrs. Bruce persisted in her determination and named it Blanche.

“I have been tempted frequently to drop the final c,” said the lecturer in discussing the matter with a representative of the Globe, “but eventually I came to the conclusion that I had made my reputation as Blanche K. Bruce and hence would stick to the name until I died.”

This woodcut of Ex Sen. Bruce accompanied the Globe story. 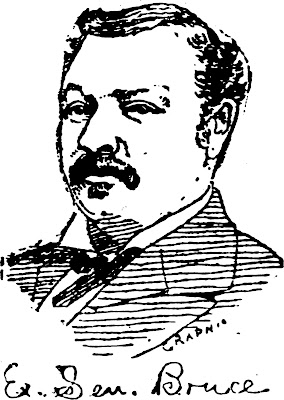 This photo of Bruce appeared in Booker T. Washington's My Larger Education, 1911. 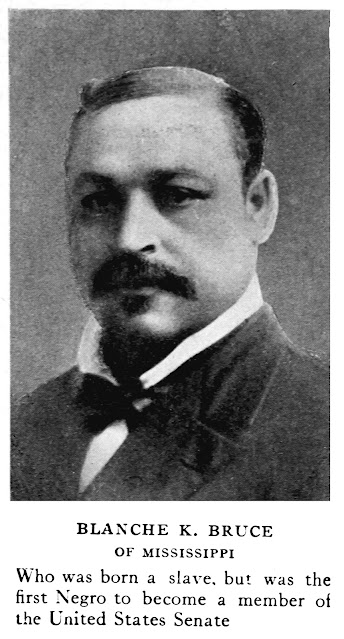 Who was born a slave, but was the

first Negro to become a member of

Senator Bruce lived in this second-empire house at 909 M Street between 1875 and 1881 during his senatorial term. (HABS photo) 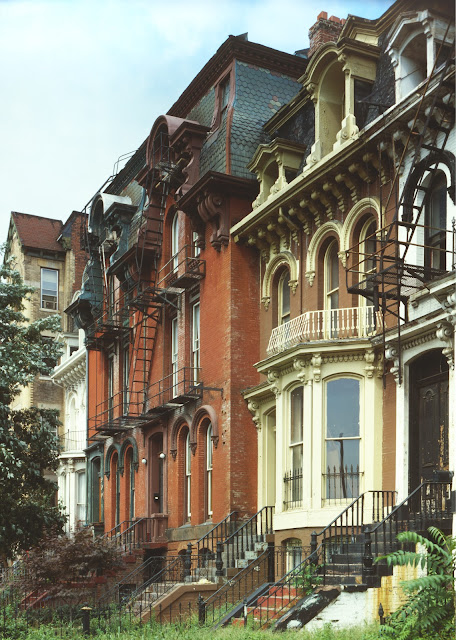 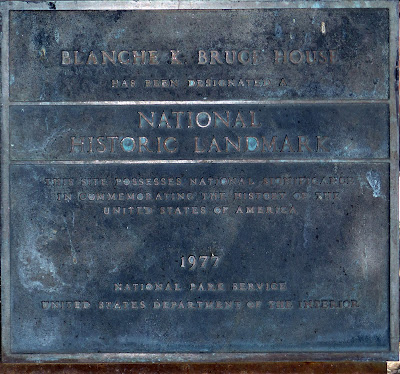 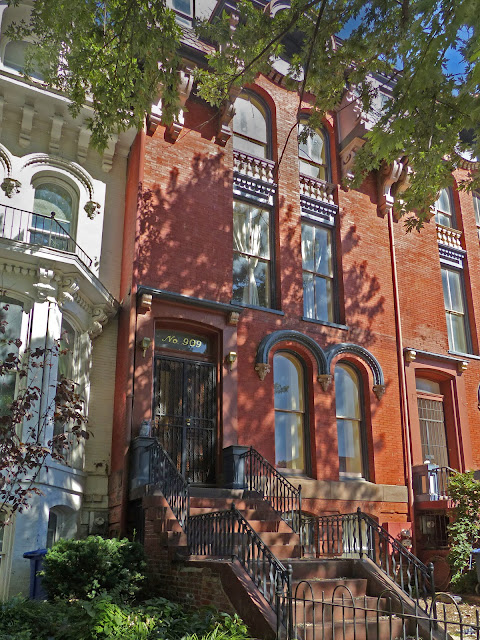 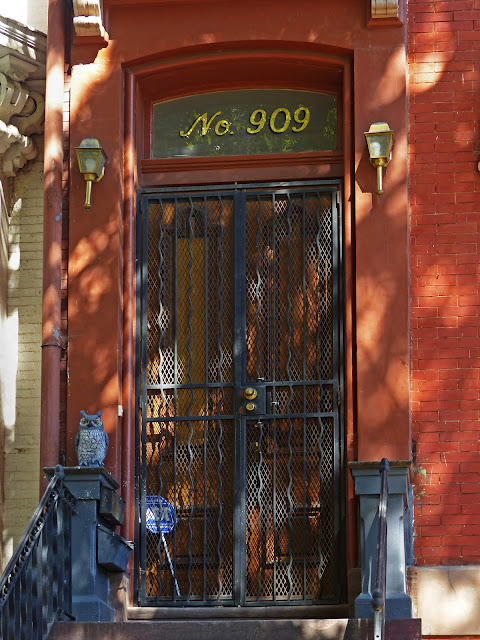 After the compromise of 1877 and the collapse of reconstruction. Bruce stayed on in Washington DC. He was appointed Register of the Treasury by President Garfield,  and held that post between May 21, 1881 – June 5, 1885. 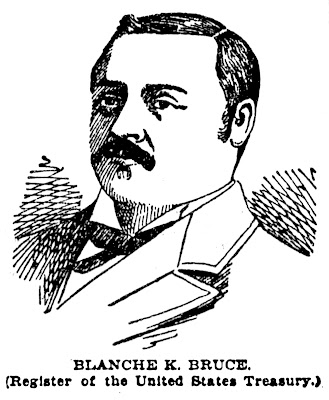 Blanche K. Bruce
(Register of the United States Treasury.)
In his capacity as Register of the Treasury, his name appeared on all U.S. currency.  Notice his signature on this U.S. $100 bill, which sold for $48,000 at Stacks and Bowers.

He was offered re-appointment by Grover Cleveland but refused, explaining to Cleveland that he could not in good conscience serve in a Democratic administration.
Blanche Bruce married Josephine Beall Willson, daughter of a wealthy Cleveland dentist in 1878. (Wikipedia) 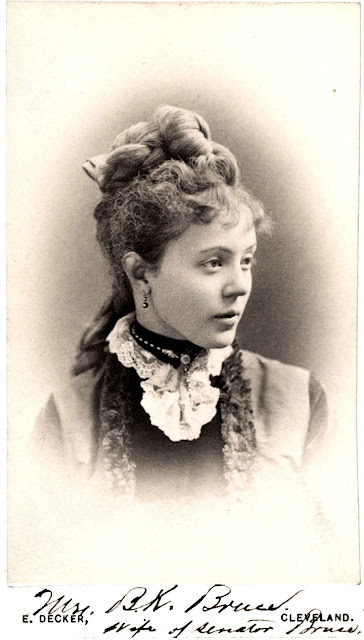 Mrs. B.K. Bruce
Wife of Senator Bruce.
E. Decker Cleveland
They lived at 2010 R. Street NW., from 1890 until his death in 1898, during which time Bruce was DC Recorder of Deeds. Benjamin Harrison appointed him to the post in 1889. Recorder of Deeds was an office traditionally given to an African American, Frederick Douglas held it first. 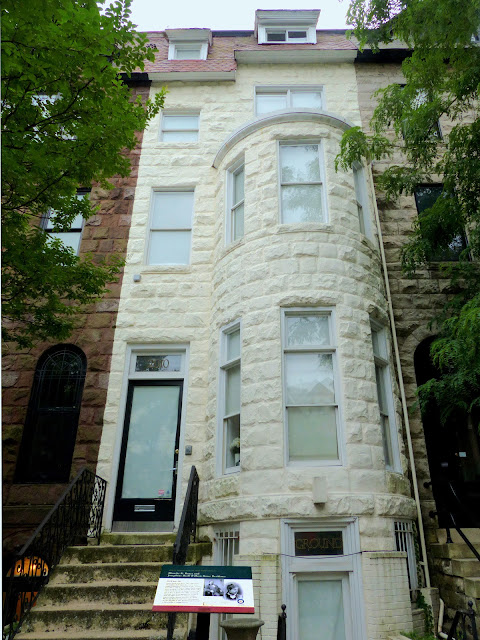 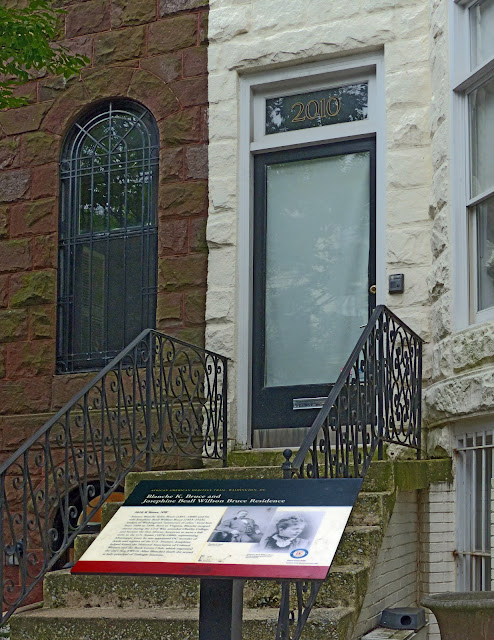 2010 R Street
The accompanying historical marker describes the couple as “leaders of Washington's ‘Aristocrats of Color’.”  Josphine B. Bruce, the marker notes, “helped found the National Association of Colored Women and the Book Lovers Club, which organized the city's first YWCA. After Blanche's death she served as lady principal of Tuskegee Institute.”

In 1897, Blanche Bruce was again appointed Register of the Treasury by McKinley. He  died of complications of diabetes on March 17, 1898. This woodcut appeared in his obituary in the Louisville Courier-Journal, the next day. 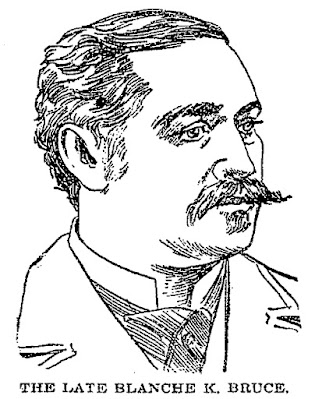 The Late Blanche K. Bruce.
An elaborate funeral was held at the Metropolitan M.E. Church and he was buried in Woodlawn Cemetery on Benning Road. 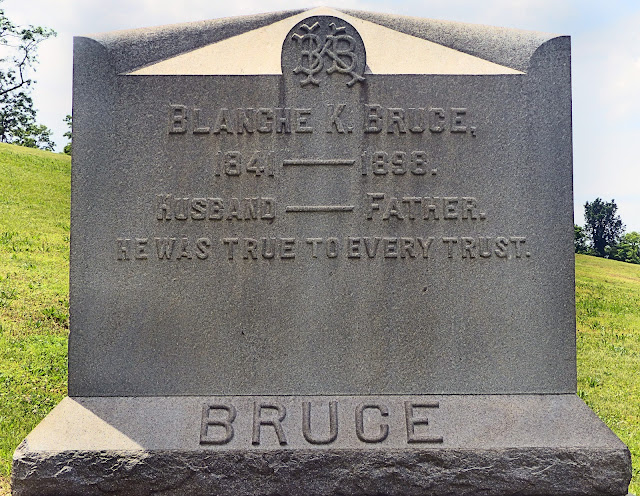 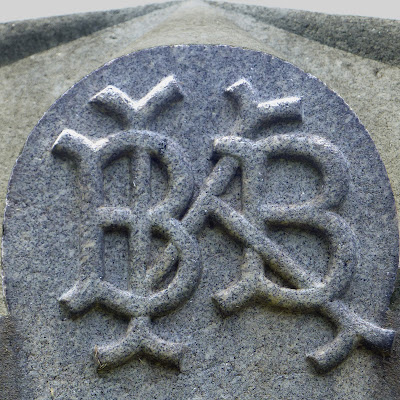