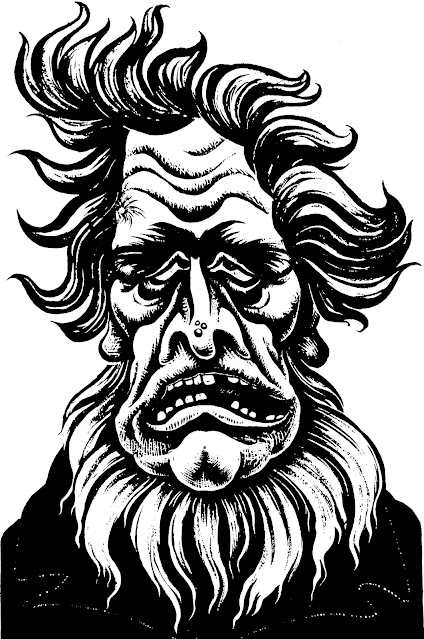 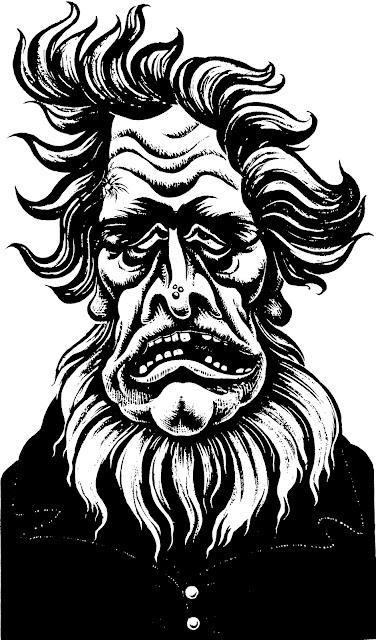 This 1933 caricature of Daniel Drew by Charles Child appeared in A Book of Americans by Rosemary and Stephen Vincent Benét. It accompanied a scathing poem which began:

I shiver when I think of you!

And these words came back from the “Hackensack”

Jest git in yer paw at a game o' draw,

Wikipedia has this quick bio of Daniel Drew:

Daniel Drew (July 29, 1797 – September 18, 1879) was an American businessman, steamship and railroad developer, and financier. Summarizing his life, Henry Clews wrote: “Of all the great operators of Wall Street … Daniel Drew furnishes the most remarkable instance of immense and long-continued success, followed by utter failure and hopeless bankruptcy”.

His most famous quote, explaining the nature of “short selling,” “He who sells what isn't his'n, must buy it back or go to pris'n,” captures his folksy speech and manipulative approach to the stock market.
Drew's actual appearance is better seen in this picture from  R.  W. McAlpine's 1872 book, The Life and Times of Col. James Fisk, Jr. 1872, Page 55. 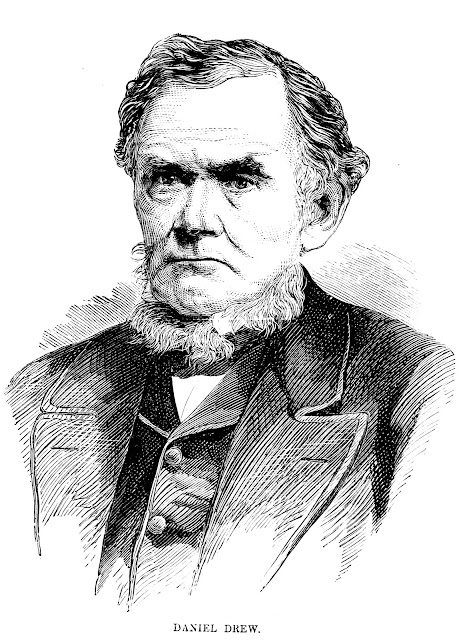 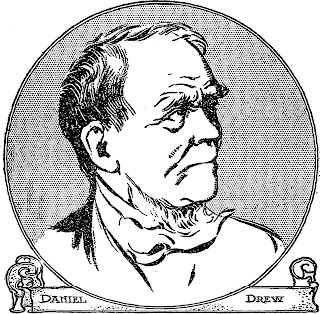 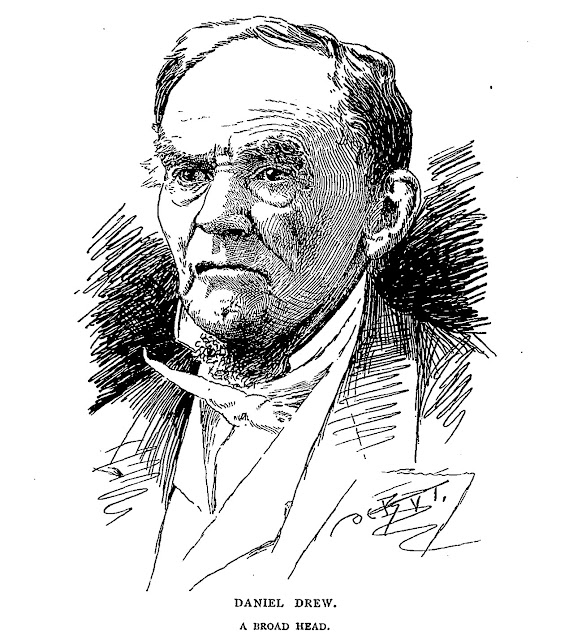 Drew was born poor in Carmel, New York in 1797. His father, a cattle farmer, died when Daniel was 15. Although underage, he was hired as a substitute for $100 and served during the War of 1812.  Soon after he joined a traveling menagerie before settling down to life as a drover.  As a drover, Drew is said to have invented the term —if not the practice— of  "watered stock,".
He moved to New York city in 1820 and took over the Bull's Head Tavern in the Bowery. 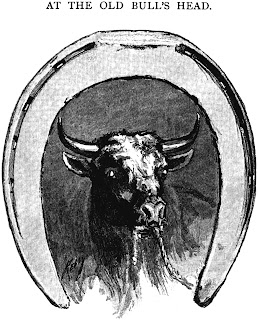 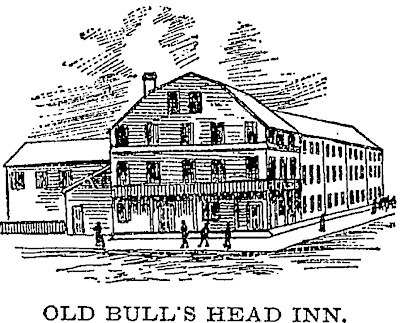 Daniel Drew married Roxanna Mead in 1828. This is the only picture I could find of Roxanna Mead Drew. It's on her Twitter account: 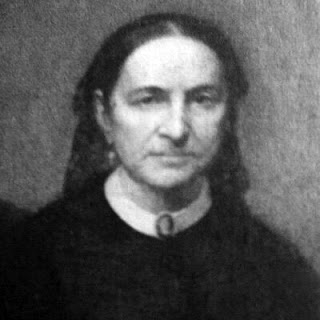 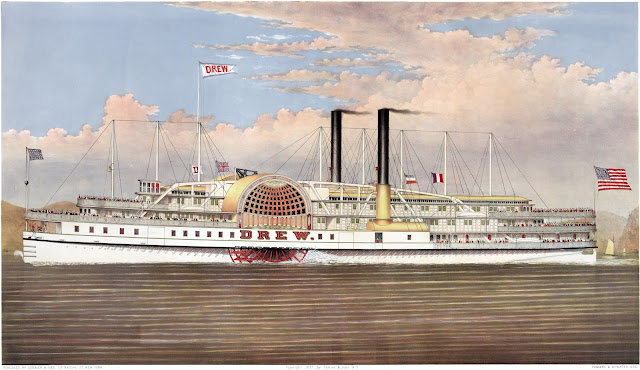 Charles R. Parsons and Lyman W. Atwater;
Currier and Ives
A Hudson river steamer is visible over Drew's shoulder in the Buttre engraving below which appears in Meade Minnigerode's 1927Book  Certain Rich Men. 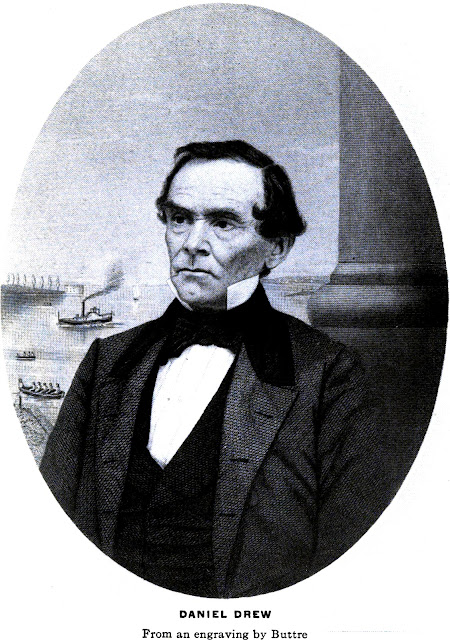 Daniel Drew
From an engraving by Buttre
During the Civil War Daniel Drew stood surety for the building of the original U.S.S. Monitor. Cornelius S. Bushnell wrote that he “was able to get Daniel Drew and the Hon. K. D. Sperry, of New Haven, to sign our bond, the latter willing to do almost anything I said was necessary to help the cause. Long may he live, and enjoy the respect of our people.” (See The Story of the Monitor by Cornelius S. Bushnell.)
Late in life, Daniel Drew was involved in an adventure, known as the Erie War, so financially arcane that I would not venture to try and explain it. I'll leave that to Appleton's Encyclopedia:

This engraving of a Brady photo from Harper's Weekly April 11, 1868 Page 237, in an article about the Erie War. This article was accompanied by a particularly opaque poem by C.H. Webb. 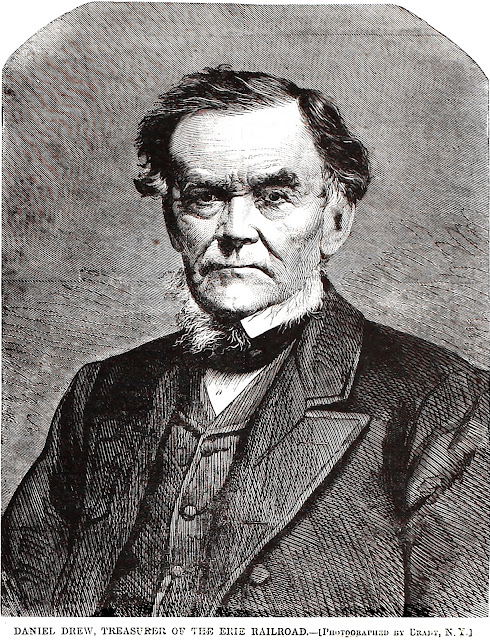 Daniel Drew, Treasurer of the Erie Railroad
Along the way Drew had become a devout Methodist and philanthropist. He founded,  for example, the Drew Seminary for Young Women. On the day of the seminary's dedication, Drew was unable to attend. He was holed-up in the Taylor Hotel hiding from the minions of Commodore Vanderbilt.
Drew spent the last years of his life living with his son on a farm in Carmel. 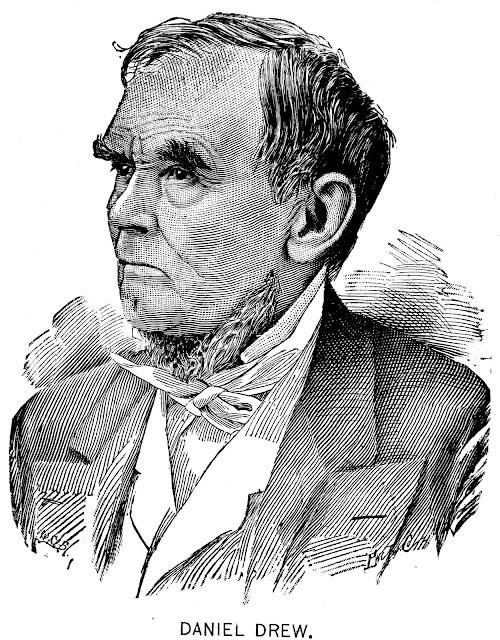 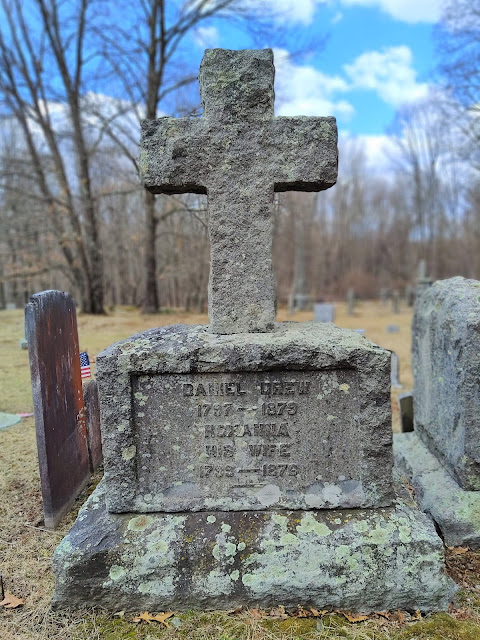