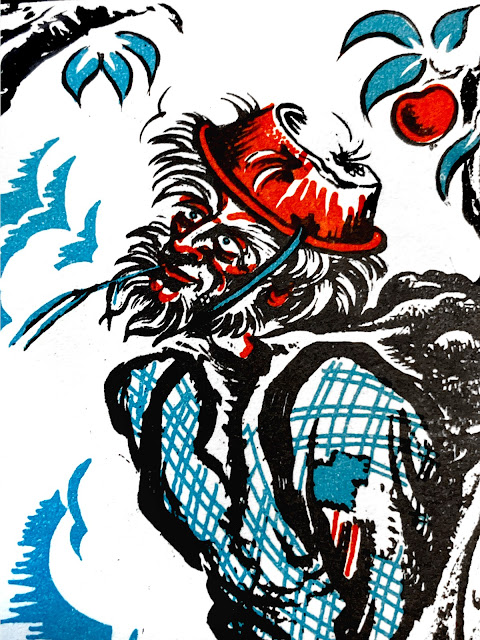 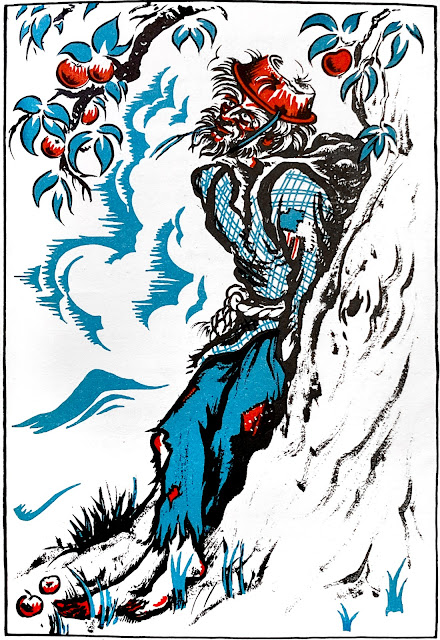 This drawing of Johnny Appleseed (John Chapman, 1774-1847), by Charles Child accompanied a poem in Rosemary and Stephen Vincent  Benét's 1933 A Book of Americans. 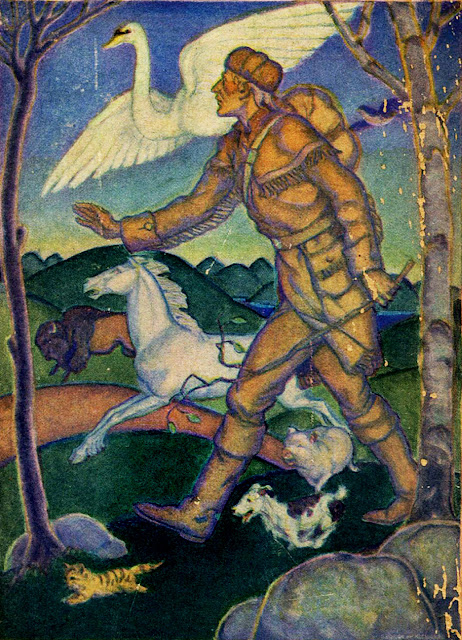 And this one accompanied Lindsay's poem in The Century Magazine. 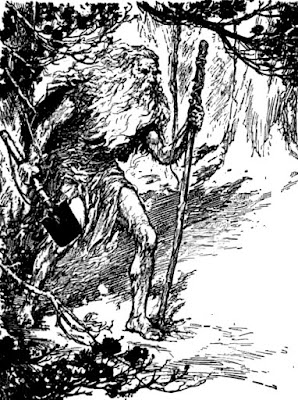 Perhaps the most authentic picture we have of Johnny Appleseed is the portrait below from Horace S. Knapp's, 1863 History of Ashland County, Ohio. The picture is said to have been drawn by a student at Oberlin or Otterbein College who had actually seen John Chapman. 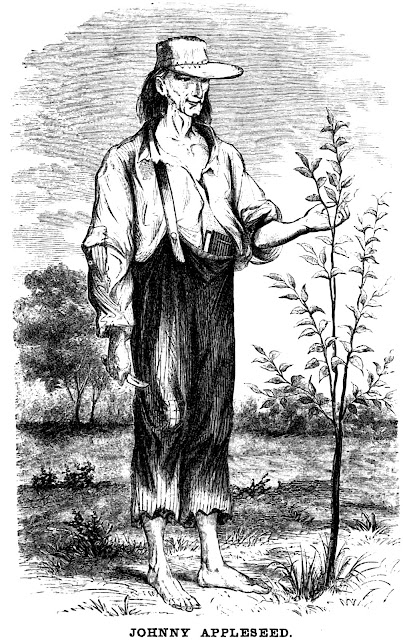 Kerrigan captions the picture this way:

The earliest drawing of John Chapman, artist unknown, was sketched from a description given by Rosella Rice. While consistent with the most credible physical descriptions of John Chapman, the grafting knife in his right hand is the artist’s own innovation. Chapman grew trees from seed and did not practice grafting. Horace S. Knapp, A History of the Pioneer and Modern Times of Ashland County (Philadelphia, 1863), frontispiece. 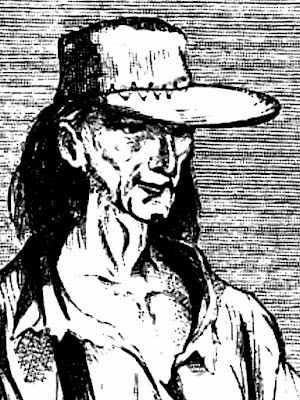 Using a cooking pot for headgear is one of the attributes of Johnny Appleseed as folk-character. Charles Child's image shows him wearing a cooking pot on his head for a hat as does the cover of the 2001 children's book of the Benét poem illustrated by S. D. Schindler. 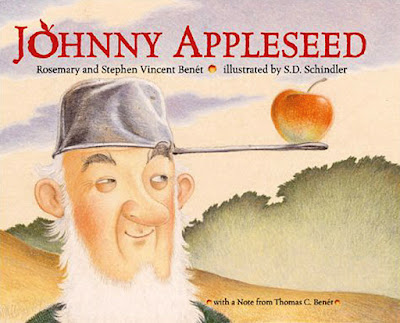 As the poem says:

He had not a hat

To encumber his head.

He wore a tin pan

On his white hair instead. 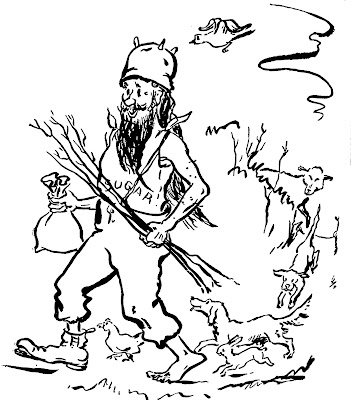 Johnny Appleseed
by Glen Rounds
from Tall Tale America by Walter Blair
Othertimes, Johnny wore a hat with an enlarged peak self-fashioned from pasteboard, as shown in the Knapp image, above.  Illustrations from H.D. Haley's 1871 Harper's Monthly article, that did so much to popularize the Appleseed legend, shows him in the pasteboard hat. 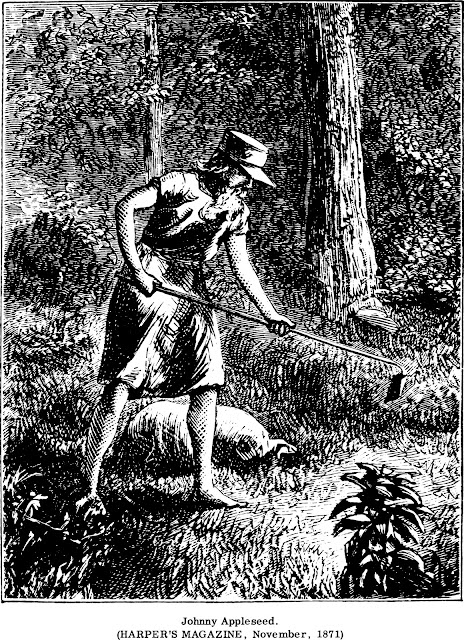 Here was the small, wiry man with the un-shaven beard and penetrating eyes; the ragged, castoff clothing; and the pasteboard hat with the huge brim. The tin pot hat seems to have been purely a fabrication by Henry Howe.33
The picture of Johnny is variously supposed to have been drawn by a student at Otterbein College who knew Johnny or from a description given by Rosella Rice.
33. None of the writers who claimed to have known or seen Johnny mentions the tin pot hat. The first recorded mention of the hat is in Howe, Historical Collections of Ohio, 1847 ed. It is not known where Howe got his information.

However, the illustration in Howe, at least in the 1904 edition, shows Johnny Appleseed in the same pose as in Knapp but wearing a slouch hat. Howe says he got the illustration from A. A. Graham's History of Richland County, and attributes it to the “personal recollection” of Rosella Rice. 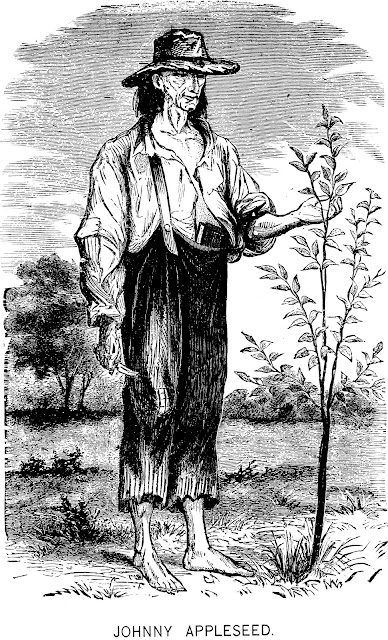 This 1913 sketch, following the woodcut above, appeared in The Pictorial History of Fort Wayne, Indiana by B. J. Griswold and Mrs. Samuel R. Taylor, 1917. John Chapman (Johnny Appleseed's real name) had a successful nursery business beyond the frontier in Pennsylvania, Ohio, and Indiana from 1797 to 1838. He planted orchards and sold the young trees to newly arriving settlers. Chapman would clear a patch of land
“where he thought at a future day appletrees would be wanted; then, in the fall, repair to Allegheny county, Pennsylvania, and wash out of the pomace at cider mills a bushel or two of seeds, and return with them on his shoulder, plant them at the proper time, enclose the spot with a brush fence, and pay some attention to the cultivation” (Price 1967, p. 36).
This basic endeavor—collect seeds at a mill, transport them beyond the frontier, and plant orchards to sell to future settlers—made Chapman a relatively wealthy man. In his lifetime, “...he had owned either by deed outright or on long-time lease no less than twenty-two properties totaling nearly twelve hundred acres. These holdings never represented great wealth, but they were considerably better than those of the average settler in the Middle West”  (Price 1967, p. 224).
Chapman's fortune grew by selling apple trees to settlers, but his trees also performed an important function. Depending on the location, apple trees were a formal or informal requirement for obtaining property rights to a piece of land. Selling apple trees to settlers was equivalent to selling them a stronger and better-defined property right.

Michael Pollen emphasized that Johnny Appleseed was mainly supplying cider apples, bringing sugar, i.e. alcohol to the frontier, since apple trees grown from seed are unlikely to produce eating varieties of apple. John Chapman famously refused to graft apple trees, it is said out of empathy for the trees.
John Chapman died on March 18, 1845. On March 22, his obituary appeared in the Fort Wayne Weekly Sentinel.
The penultimate verse of the Benét's poem says:

He has no statue.

He has no tomb.

He has his apple trees

In our day, there are at least one tomb, or grave marker, and several statues. The Appleseed Memorial Park surrounding Johnny Appleseed's grave in Fort Wayne, is a National Landmark. Carol Highsmith took this photo of the grave stone. 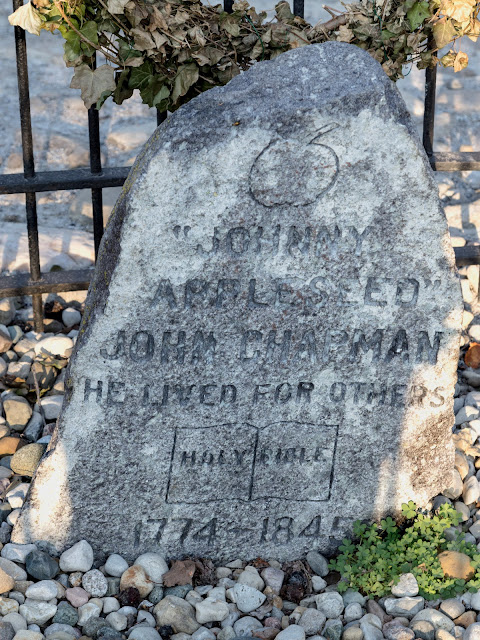 Johnny Appleseed's Grave Stone  by Carol M. Highsmith
🍎
“Johnny
Appleseed”
He Lived for Others
[Holy|Bible]
1774-1845
The statue below of young John Chapman, stands in front of the Johnny Appleseed Visitor Information Center at 1000 Rt. 2 in Lancaster Massachusetts. (Photo by Researchabc.) 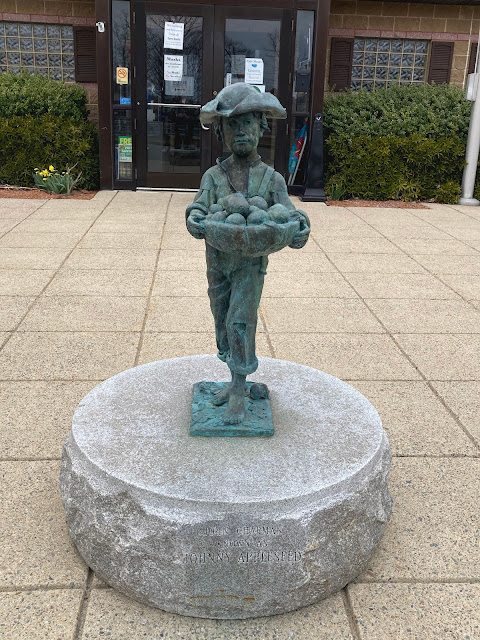 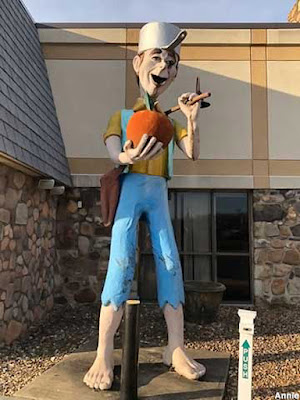 In 1966 Johnny Appleseed appeared on a 5¢ postage stamp. 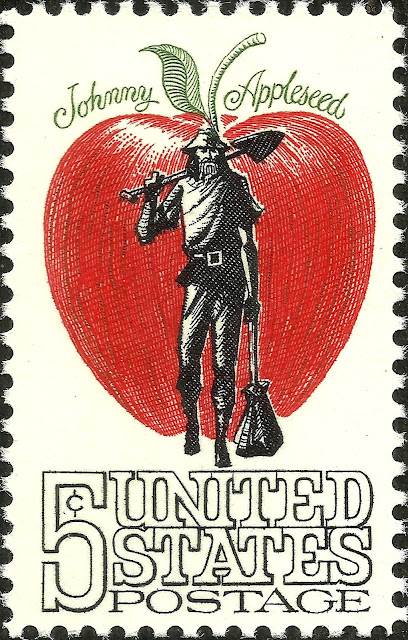