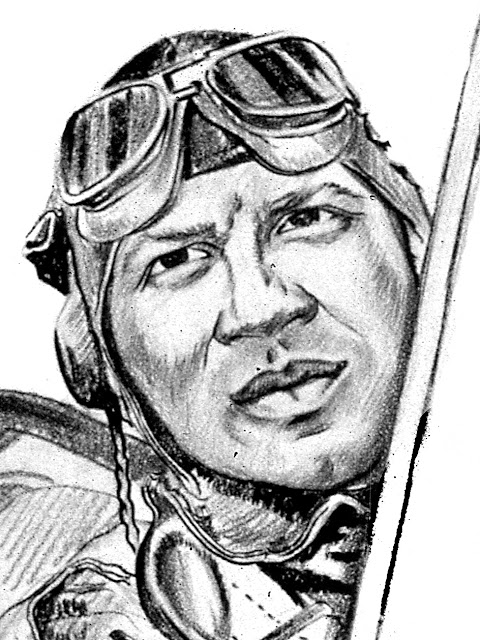 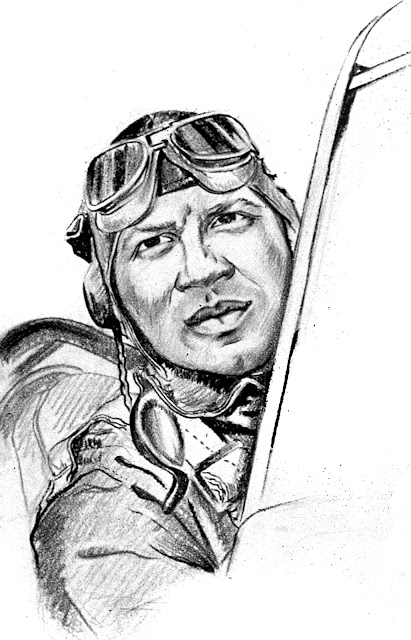 This 1943 sketch of Wilmeth Sidat-Singh by Charles Henry Alston was the primary image in a WWII propaganda poster Alston produced for the Office of War Information. 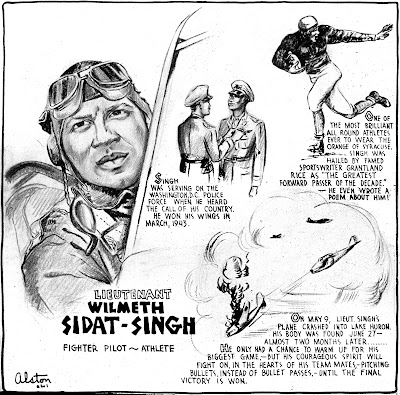 Wilmeth Sidat-Singh , 1918-43                                           208 - COM - 193
Wilmeth Sidat-Singh became nationally known for his incredible athletic prowess.  First at DeWitt Clinton High School in New York City (Alston's own alma mater) and then at Syracuse University, the adopted son of a Hindu physician generated raves from sportswriters and fans for his football and basketball abilities. During his collegiate career, the University of Maryland's football team threatened not to play Syracuse in a home game if that school attempted to play Sidat-Singh. Obligingly, Syracuse left him behind —and lost convincingly!  Sidat-Singh avenged himself the following year when Maryland met Syracuse at Syracuse by playing a large role in Maryland's eventual defeat. Sidat-Singh went on to play professional basketball before entering military service. Despite the obstacles placed in the way of aspiring black fliers, he attended the Army Air Corps Flying School set up to train black navigators, flyers, and other flight personnel. He became a full-fledged member of the all black 332d Fighter Group (a unit that would serve with distinction in later combat overseas), and was stationed at Selfridge Field in Michigan when his plane crashed. A potentially brilliant career in professional football or basketball was thus tragically cut short.  He, together with so many other black military personnel —before, after, and during the Second World War — willingly put their own lives on the line in wartime service, despite the fact that as the United States entered the war, racial segregation was still very much the order of the day. -- Portraits in Black, 1992.

Alston seems to have drawn the image from the photo below, which appears at Find-a-Grave, The National WWII Museum, and other places around the web. 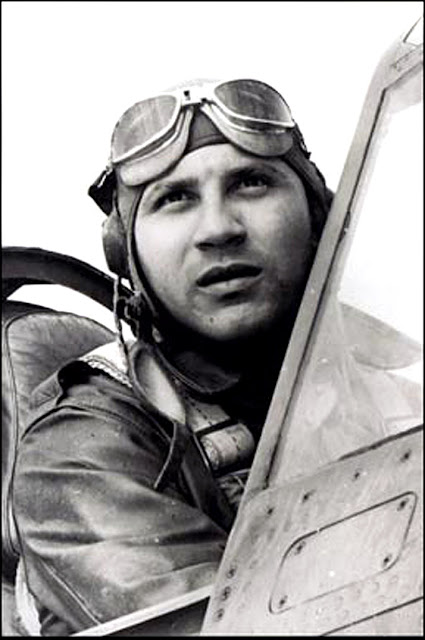 As a football player for Syracuse University, this picture of Sidat-Singh appeared in The Crisis in November of 1938. The cover story recounts a racially motivated snub by University of Maryland and Sidat-Singh's revenge. 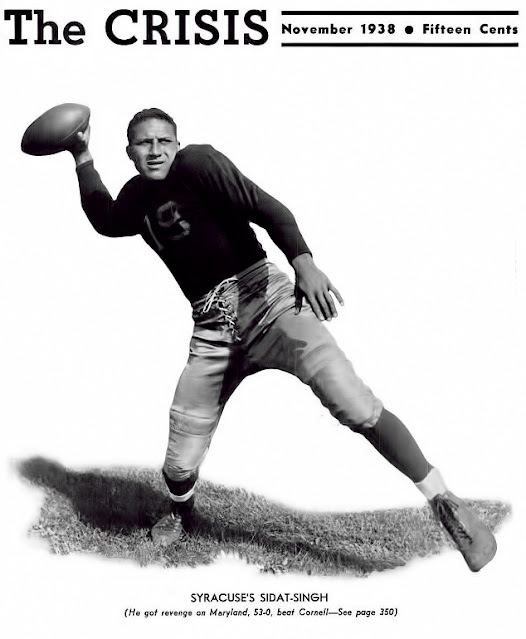 Syracuse's Sidat-Singh
(He got revenge on Maryland, 53-0, beat Cornell)

Last year when the Syracuse University football team went to Baltimore to play the University of Maryland, the Marylanders refused to allow Wilmeth Sidat-Singh to play and they won the game. This year when Maryland came  to Syracuse, Sidat-Singh played and assisted his team-mates in trouncing Maryland by a score of 53-0.

Sidat-Singh stole the glory and the headlines on October 15 when, in the last three minutes of play, he threw forward passes to enable his team to overcome a big lead and defeat the Big Red team of 19-17. In this game, he threw 8 passes and completed 7. In two years of football he has completed passes which have accounted for 14 touchdowns.

On November 12, Syracuse will play Duke University of Durham, N. C., at Syracuse and Duke has agreed to play with Sidat-Singh in the lineup.

Sidat-Singh is twenty years old. He was born in Washington, D. C., the son of Elias and Pauline Webb. His father died when he was five. The boy legally adopted the name of his stepfather, Dr. Samuel Sidat-Singh, who now practices in Harlem. The lad was graduated from DeWitt Clinton high school, New York City, where he played basketball. -- The Crisis.

Maryland apologized to the Webb/Sidat-Singh family and honored Wilmeth Sidat-Singh 76 years later in 2013. See the Baltimore Sun, Nov. 9, 2013 and the video below:
Sidat-Singh went to Syracuse on a Basketball scholarship. In addition to his football prowess he was a basketball star at Syracuse. This alliterative photo appeared in the Brownsville Herald on January 22, 1937.
Slick S-Men Shoot for Syracuse 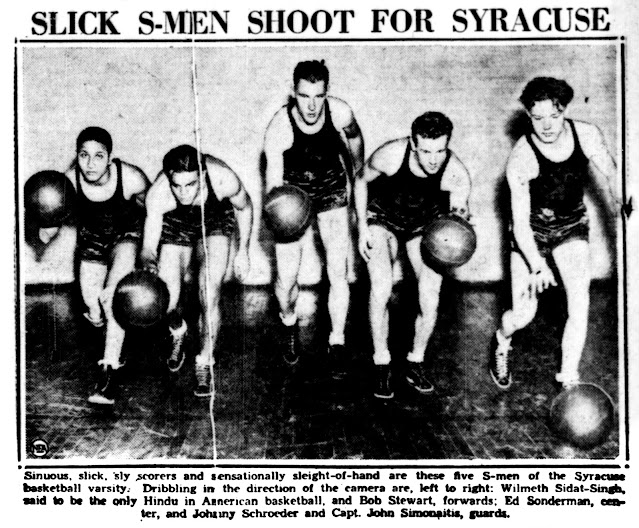 Sinuous, slick, sly scorer and sensationally sleight-of-hand are these five S-men of Syracuse basketball varsity. Dribbling in  the direction of the camera are, left to right: Wilmeth Sidat-Singh, said to be the only Hindu in American Basketball, and Bob Stewart, forwards: Ed Sonderman, center, Johnny Schroeder and Capt. John Simonitis, guards.

In 1937, The Washington Post, referred to Sidat-Singh as “Presumably the only Hindu basketball player in the United States.” Later the same year, The Chicago Defender, an African American newspaper, set the record straight on the ethnicity of Wilmeth Sidat-Singh.

Sidat-Singh is the son of the late Elias Webb of Washington, D.C. His mother remarried and is now Mrs. Pauline Sidat-Singh, wife of Dr. Sidat-Singh, who is practicing medicine in New York. Dr. Singh is a graduate of Howard university school of medicine, and adoped the boy and gave him his name.
Syracuse's gridiron hero's christened name is Wilmeth Webb. His grandmother, Mrs. Elias Webb, lives now at 79 R. street, northwest, Washington, and his nephew Waldo Webb, is a teacher in Shaw junior high school. This ancestry places Sidat-Singh directly in the brakets of our race. So you can't say there's nothing in a name.

Wilmeth Sidat-Singh gained considerable fame from his performance in a 1938 football game between Syracuse and Cornell. As Alston tells it: 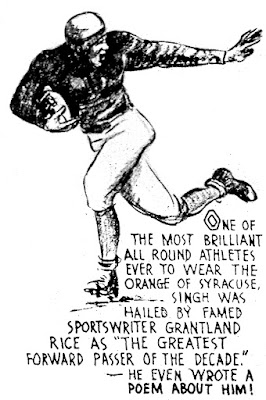 One of the most brilliant  all round athletes ever to wear the Orange of Syracuse, Singh was hailed by famed sportswriter Grantland Rice as “The Greatest Forward Passer of the Decade.” -- He even wrote a Poem about Him!

Read Grantland Rice's effusive description of that game, in the Baltimore Sun, Oct 16, 1938.
Wilmeth Sidat-Singh graduated from Syracuse with a degree in zoology (pre-med) in 1939 and played professional basketball with the Harlem Renaissance against teams like the Philadelphia Hebrews and the Washington Professionals. He later played for the Washington Bruins.
Sidat-Singh was briefly a Washington D.C. policeman before he joined the Army in 1942. 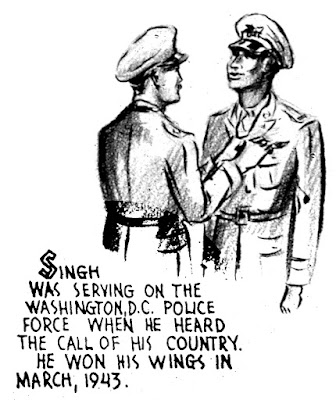 Singh was  serving on the Washington, D. C. police force when he  heard the call of his country. He won his wings in March, 1943. -- C.H. Alston

Lieutenant Wilmeth Sidat-Singh became a member of the The 332nd Fighter Group, The Tuskegee Airmen. 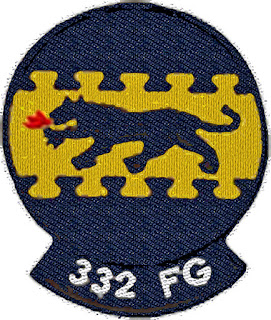 His P-40 fighter plane's engine caught fire over Saginaw Bay off Lake Huron, on a training flight on May 9, 1943. Lt. Sidat-Singh parachuted into Lake Huron where he drowned. His body was not found for 7 weeks. The photo below accompanied an article in the Washington Evening Star, May 10, 1943, entitled “Sidat-Singh, Former Football Star, Missing After Plane Crash.” 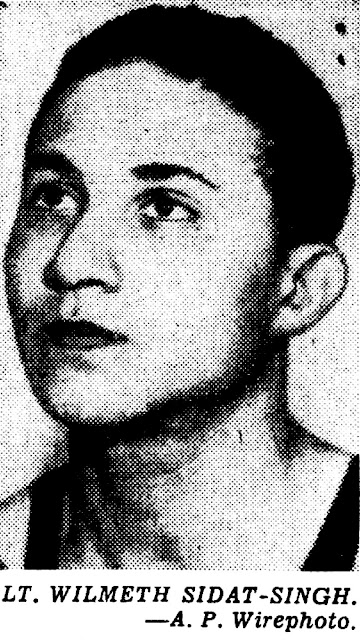 Lt.  Wilmeth Sidat-Singh.
-- A.P. Wirephoto.
On June 28, 1943, the Washington Post headline was, “Sidat Singh's Body Recovered From Lake Huron.”
Wilmeth’s mother, Mrs. Pauline E. Sidat-Singh, told the Baltimore Afro-American, “We loved him, but God loved him more. I really don’t feel so badly now, Wilmeth had really crammed a whole lot of living into his twenty-five years.”
He is buried in Arlington Cemetery. Find-a-Grave has this  photo of his headstone: 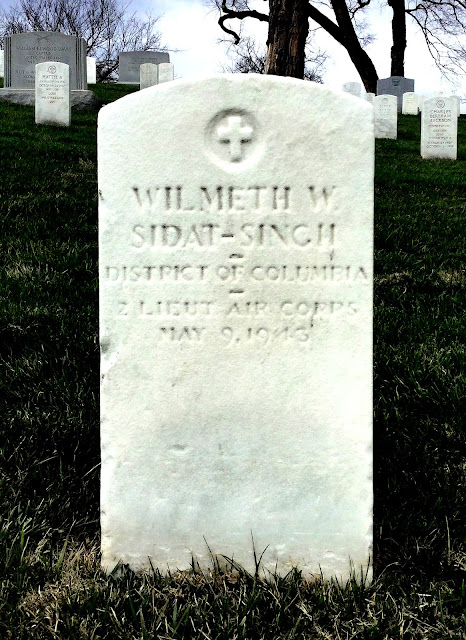