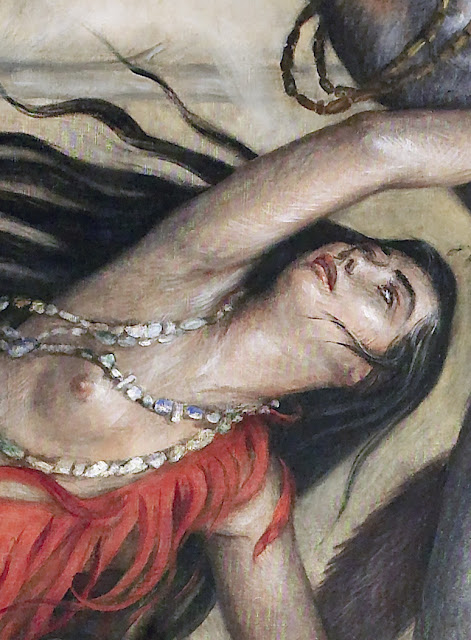 A plaque hanging in the library describes the mural. 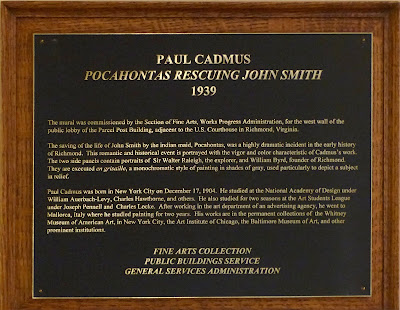 Paul Cadmus
Pocahontas Rescuing John Smith
1939
The mural was commissioned by the Section of Fine Arts, Works Progress Administration, for the west wall of the public lobby of the Parcel Post Building, adjacent to the U.S. Courthouse in Richmond, Virginia.

The saving of the life of John Smith by the indian maid, Pocahontas, was a highly dramatic incident in the early history of Richmond. This romantic and historical event is portrayed with the vigor and color characteristic of Cadmus's work. The two side panels contain portraits of Sir Walter Raleigh, the explorer, and William Byrd, founder of Richmond. They are executed en grisaille, a monochromatic style of painting in shades of gray, used particularly to depict a subject in relief.

Paul Cadmus was born in New York City on December 17, 1904. He studied at the National Academy of Design under William Auerbach-Levy, Charles Hawthorne, and others. He also studied for two seasons at the Art Students League under Joseph Pennell and Charles Locke. After working in the art department of an advertising agency, he went to Mallorca, Italy where he studied painting for two years. His works are in the permanent collections of the Whitney Museum of American Art, in New York City, the Art Institute of Chicago, the Baltimore Museum of Art, and other prominent institutions. 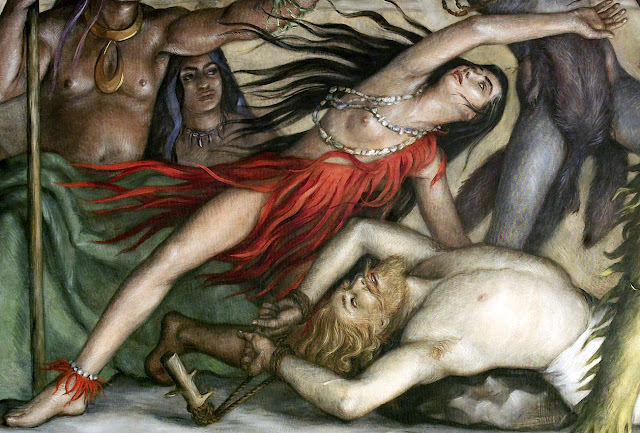 Cadmus' sister Fidelma posed for Pocahontas and his lover at that time, Jared French, posed as John Smith. Cadmus remarked that “She didn't pose for me half nude. We're not that kind of family.” 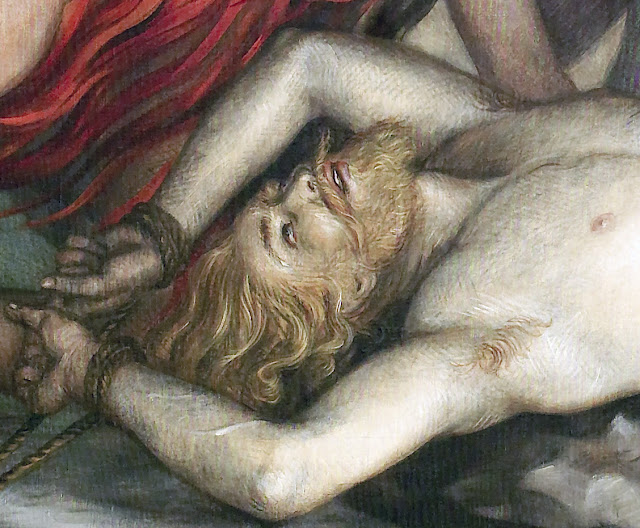 One of the indians is played by Lincoln Kirstein who was Fidelema's husband. He would later found the New York City Ballet and write a 1984 biography of Cadmus. 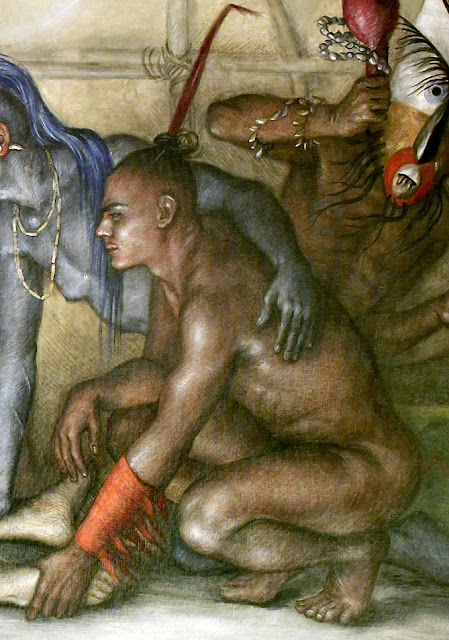 No word on whether anyone in Cadmus' circle posed for Powhatan. 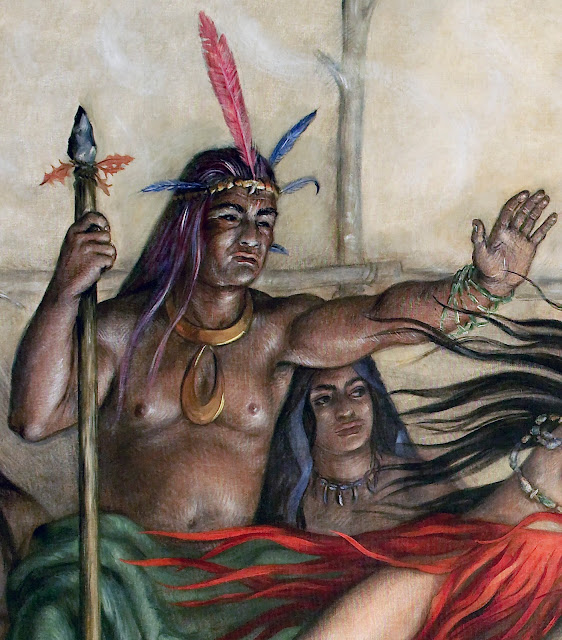 Like many works by Paul Cadmus this one stirred controversy. 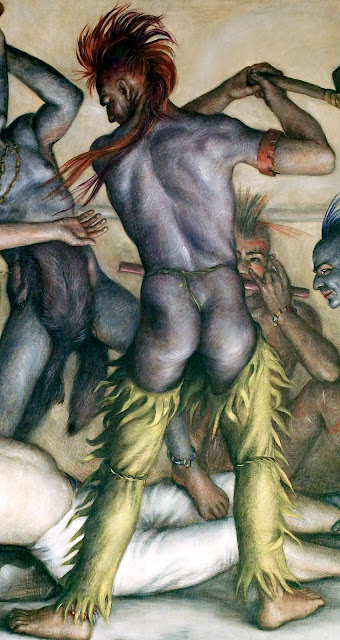 It was not the general nudity and pulchritudinous buttocks that shocked but the treatment of the fox skin that covers the private parts of one of the the club wielding Native Americans. The nose of the fox was deemed to resemble the penis it covered. 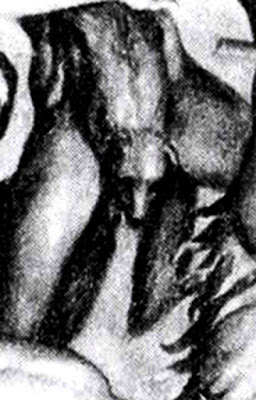 So Cadmus had to paint out the foxes head. 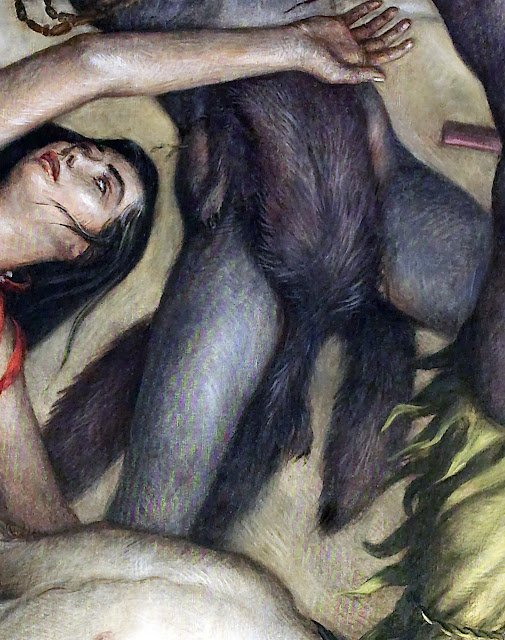 See this explanation of the repainting of this mural to suit the morals of the Federal Government in the 1930s. 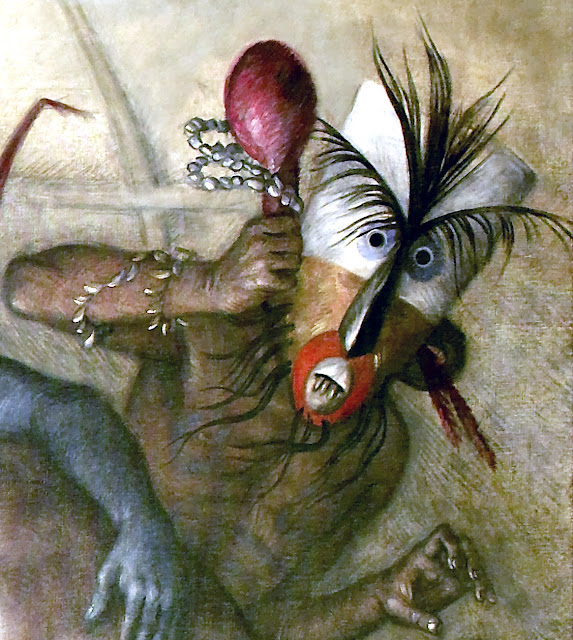