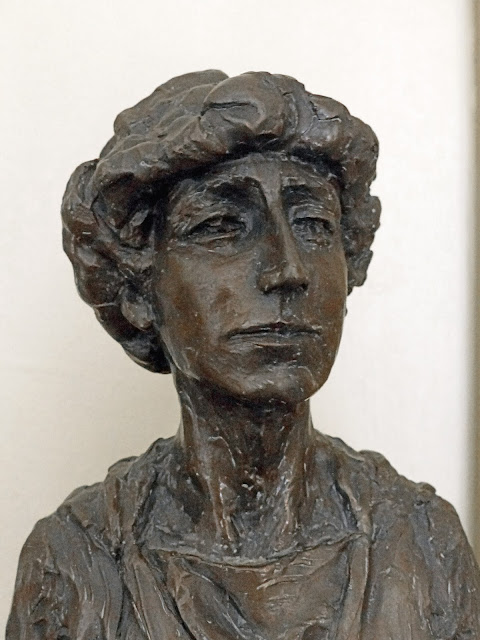 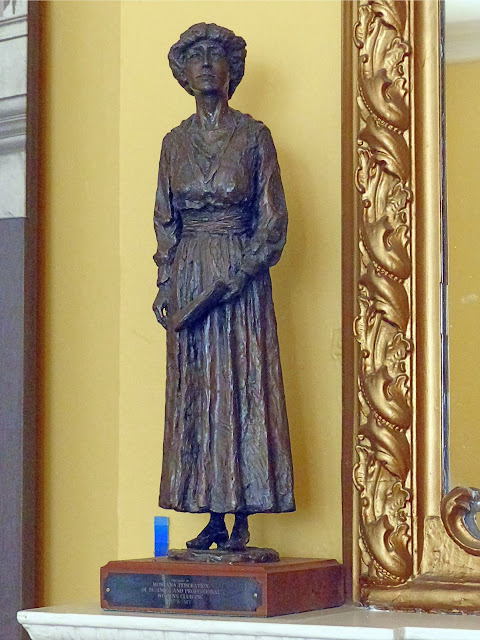 This Statuette of Jeannette, or Jeanette, Rankin by Mary Theresa (Terry) Mimnaugh stands on a mantlepiece in the Sewall-Belmont House in Washington, DC. It was given to the National Woman's Party by Margaret Eraker, President of the Montana Business and Professional Women's Club, on February 6, 1987. 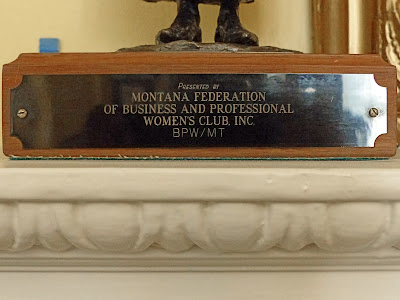 Presented By
Montana Federation
of Business and Professional
Women's Club, Inc.
BPW/MT
The small plaque on top of the base identifies Jeannette Rankin as a two time U..S. Congresswoman. 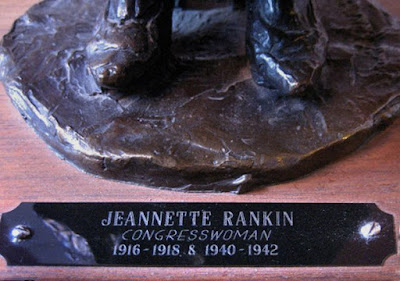 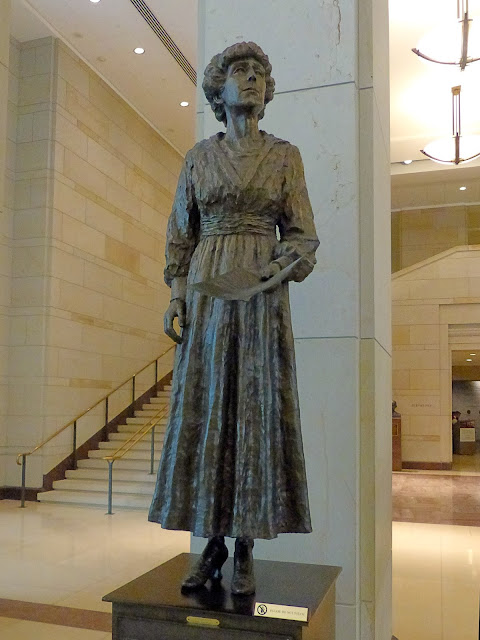 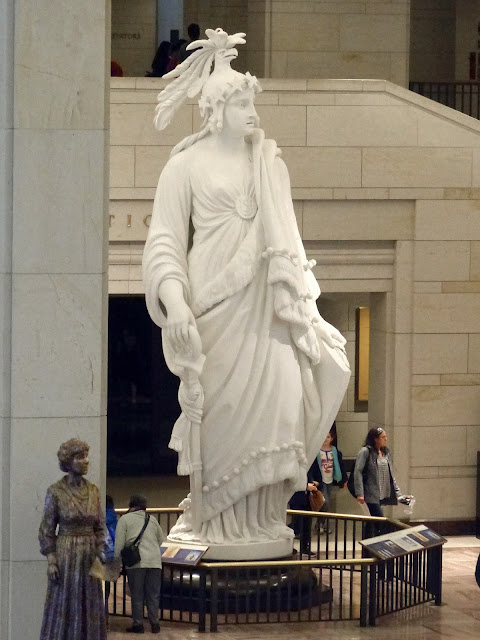 When Rankin was elected to the U.S. Congress, from Montana, in 1916 national Woman's suffrage was still four years off. Montana had voted to allow women to vote in 1914. She was immediately faced with the question of U.S. entry into what would come to be called World War 1. Wilson called on the congress to declare war on Germany in order to “make the world safe for Democracy.” She and 49 Congressmen voted no. Instead of just voting “Nay,” she said “I wish to stand for my country, but I cannot vote for war.” 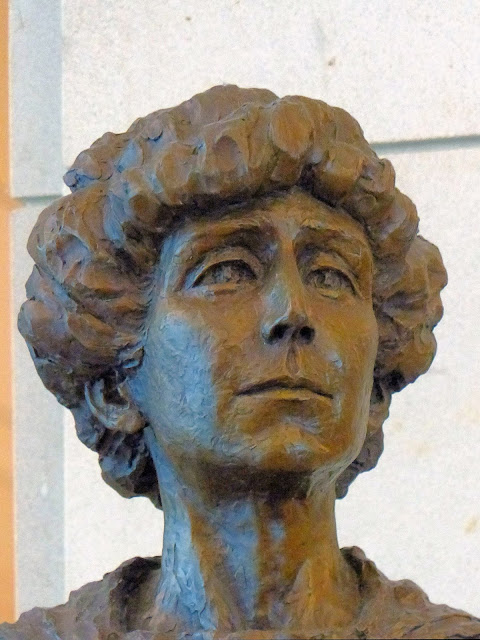 Jeannette Rankin
"I cannot vote for war"
1880-1973
In 2004 the Congress commissioned this painting by Sharon Sprung. 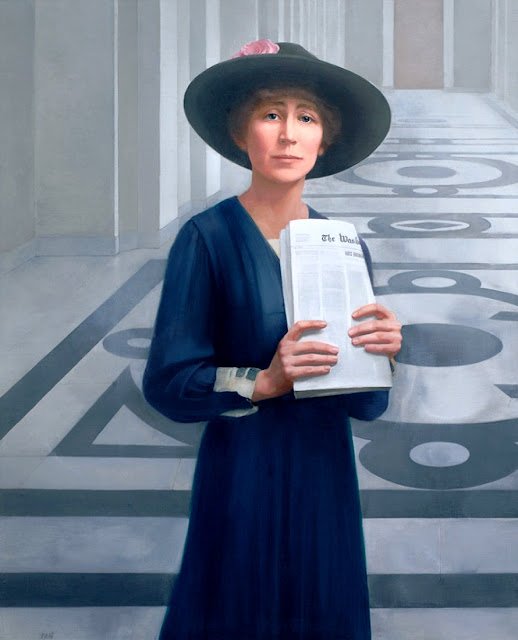 Collection of the U.S. House of Representatives

Unveiled in 2005, Jeannette Rankin’s portrait communicates both the cultural importance and the loneliness of her position as the first woman elected to Congress. Standing in the empty corridor adjacent to the House Chamber, Rankin is depicted holding the Washington Post, in which her 1917 swearing-in was front-page news. The vacant, cool-toned space and her look of resigned calm reflect her singularity as a woman in the legislative branch three years before women’s suffrage became federal law. -- Architect of the Capitol.

Her Congressional Biography summarizes her carrier this way:

In November 1916, four years before the Nineteenth Amendment guaranteed the right of women to vote, Jeannette Rankin of Montana became the first woman elected to the United States Congress. During the first half of the twentieth century, Rankin served two nonconsecutive terms in the House which coincided with World War I and World War II. While she may be best known for her votes to keep America out of those conflicts, Rankin was also a tireless activist who worked to expand voting rights for women, to ensure better working conditions for laborers across America, and to improve health care for women and infants. Ultimately, she was a pathbreaker. “I may be the first woman member of Congress,” Rankin observed in 1917. “But I won’t be the last.”

When Montana redistricted and eliminated at-large seats, Rankin ran unsuccessfully for the Senate. She didn't run again for national office until 1940, when she ran for Congress a second time. This campaign ad appeared in the Western News, Libby Montana, on Oct. 31, 1940.

Soon after she took her seat, history repeated. The day after the bombing of Pearl Harbor by the Japanese, President Roosevelt, passionately called for a declaration of war. Jeannette Rankin stuck to her pacifism and voted against the declaration. Her's was the only no vote. The Evening Star headlined the Declaration of War on December 8, 1941.

Also on page 1 of the Evening Star that day was this short article:

Lone Dissenter
Representative Jeannette Rankin, Republican, of Montana, cast the single dissenting vote as Congress declared war on Japan today. Miss Rankin was among those how voted against war in 1917. 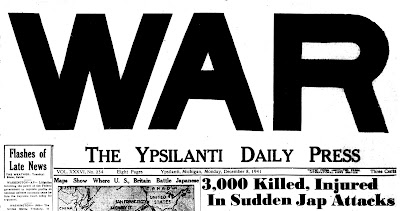 The same page had this paragraph describing the vote.

The Senate voted 82 to 0 for war and the House, 388 to 1 for war. The lone "no" vote was cast by Miss Jeannette Rankin, Republican, Montana, who voted against war with Germany in the first World War.

Her vote was so unpopular that she had to call Capitol security to escort her from the building. This Getty Photo is taken from a article by Daniel Moskowitz in  World War II Magazine: 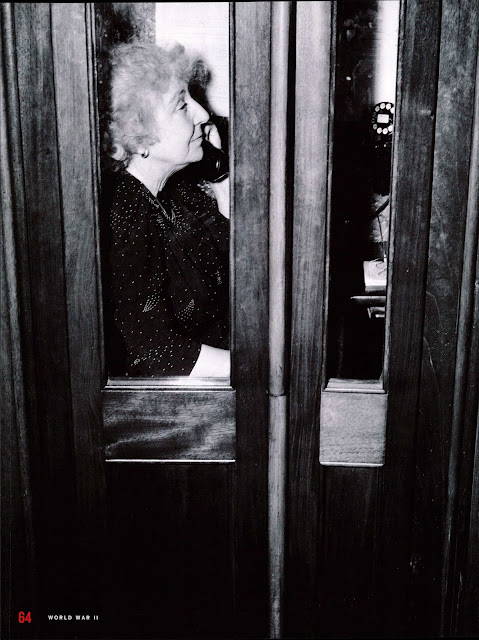 ...those who retired included Jeanette Rankin, who voted against war both in 1917 and this year and therefore had no chance...

Her Last Protest
Her final protest against war would not, therefore, be as a Congresswoman, but as an antiwar demonstrator. She had become a national symbol of the peace movement once again with the formation of the Jeannette Rankin Brigade in 1967. The years 1967-1973 were travel years for Rankin. In 1972 alone she crisscrossed the country several times, including once by car, in the company of John Kirkley, a young man who served as her traveling companion in these last years. One of the high points of all these personal appearances and television interviews came on January 15, 1968, when a coalition of 5,000 women under the banner of the Jeannette Rankin Brigade demonstrated against the war. Although the demonstration itself was peaceful, the Brigade later brought suit against the Capitol Police for not allowing them to march on to the Capitol grounds. In 1972 the Supreme Court ruled that the Brigade women indeed had been denied their First Amendment rights under an 1882 law forbidding all kinds of demonstrations on Capitol grounds. This decision now makes peaceful demonstrations possible in that area of Washington, D.C. --  Wilson, Joan Hoff (November 1977). "American Foreign Policy: Life as a Pacifist" (PDF). Montana: The Magazine of Western History: 38–53

Hear Here, a rock-ballad entitled “Jeannette Said No”. composed by Joe DeFilippo and performed by the R. J.  Phillips Band.
Posted by Allen Browne at 8:31 AM