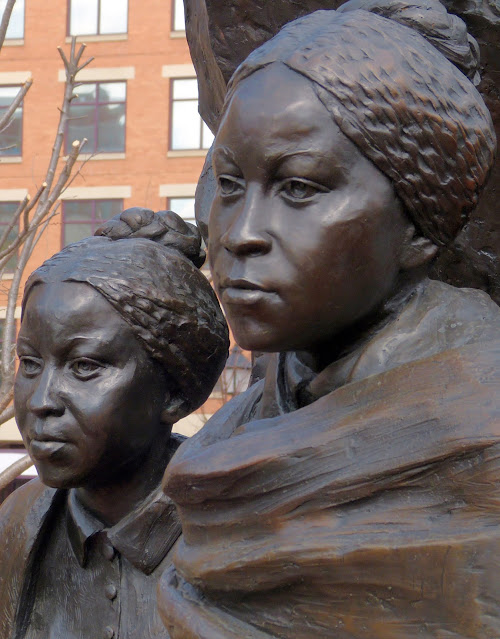 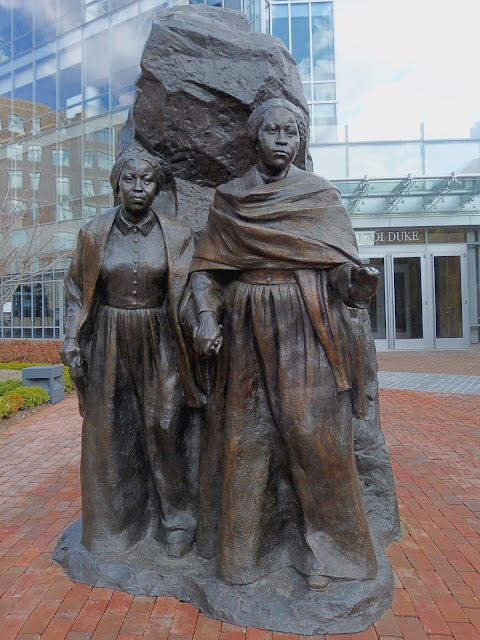 This 2010 statue of the Edmonson Sisters, Mary and Emile, by Erik Blome stands in front of 1701 Duke Street in Alexandria, Virginia. 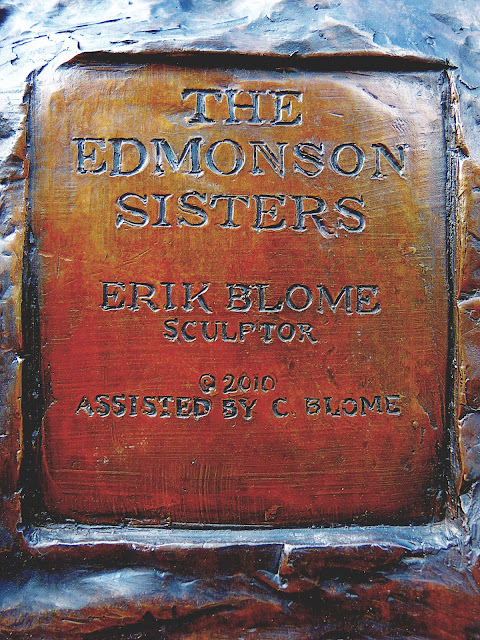 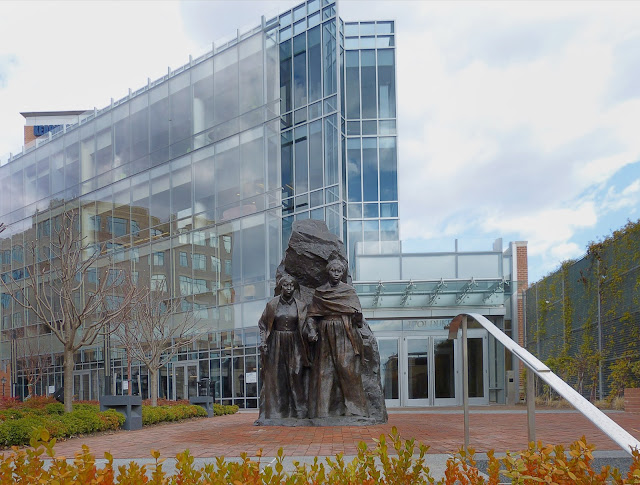 Carr Properties commissioned the Edmonson Sisters sculpture when they developed 1701 Duke Street into Edmonson Plaza. The glass façade was designed by SmithGroupJJR.
Blackpast identifies the Edmonson's this way:

Mary Edmonson (1832–1853) and Emily Edmonson (1835–1895) were enslaved African Americans who became prominent in the United States abolitionist movement after gaining their freedom. On April 15, 1848, they were among the 77 slaves who tried to escape from Washington, D.C. to New Jersey on the schooner The Pearl. 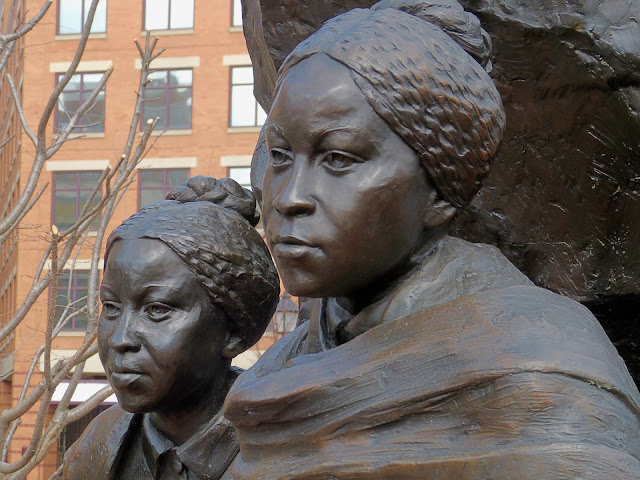 This famous picture of the Edmonson Sisters appeared in John H. Paynter's 1930 book Fugitives of the Pearl. 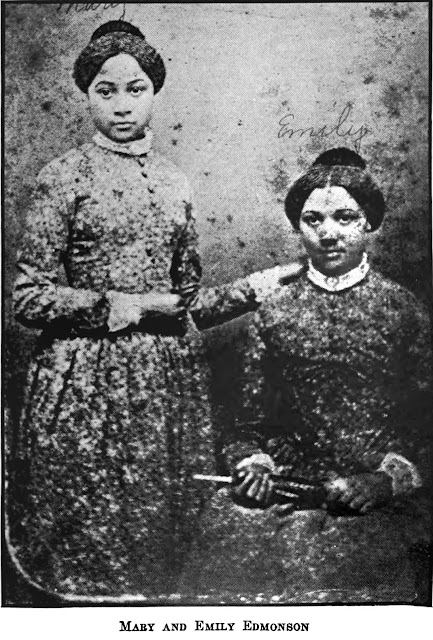 As the handwriting on the photo indicates that's Emily sitting on the right and Mary standing on the left.

It looks to me like the taller of the two girls portrayed in Blome's statue is Mary Edmonson.
And that would make this Emily Edmonson.
In April of 1848, when Mary Edmonson was 16 and her sister Emily was 13, they joined their siblings and 71 other enslaved African Americans in a now famous escape attempt. The plan was to use the schooner Pearl to sail down the Potomac from Washington to the Chesapeake Bay, up the bay to the Delaware River and on to the free state of New Jersey. They successfully found their way to the lower Chesapeake Bay but were stopped by severe headwinds and re-captured off Point Lookout.  On the back of the monument is an image of the Pearl. 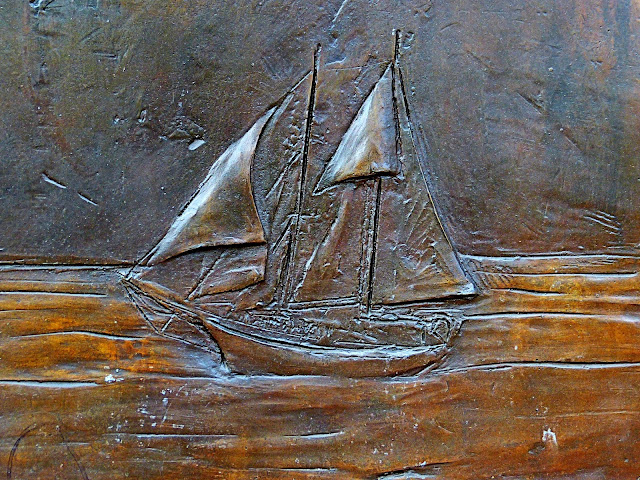 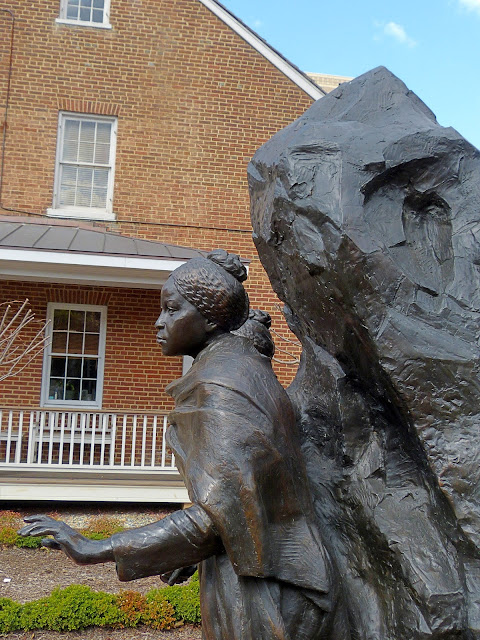 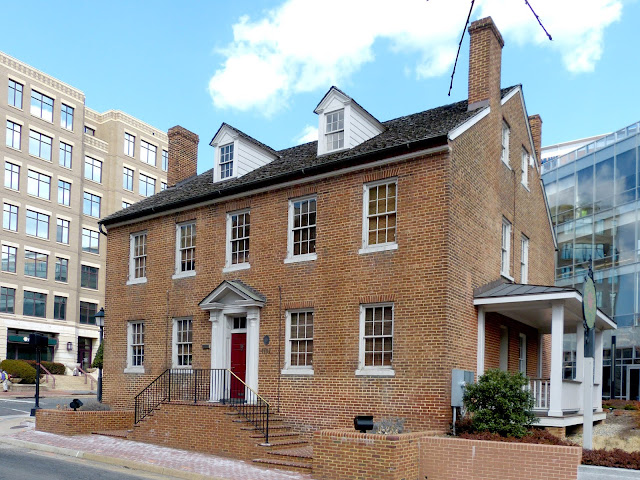 An historical marker placed by the City of Alexandria, tells of the likely fate of the sisters.

In 1848, Mary Edmonson, 16, and Emily Edmonson, 13, who had joined four of their siblings and seventy-one other blacks in a failed attempt to escape slavery on the Pearl, were purchased by Bruin and destined for auction in New Orleans and a likely fate as “fancy girls” in that city's brothels. Their story and their father's efforts to free them became a call to action for the abolitionist movement. -- HMdb.

At the request of Paul Edmonson, father of the sisters, Henry Ward Beecher preached a sermon at his Plymouth Church, pointing out how the pretty daughters would be sold into sexual slavery in the south and encouraging the congregation to think of their own children in the same situation. He raised enough money to buy the freedom of the Edmonson Sisters.
The historical marker says this of the subsequent career of the Edmonson sisters.

Abolitionists encouraged the freed sisters to become teachers and, by 1853, Mary and Emily were studying at Oberlin College. Mary died of tuberculosis soon after; Emily returned to Washington, D.C., to help educate young black women. Emily married shortly before the Civil War and eventually moved to Anacostia with her husband. She remained a life-long friend of her neighbor, Frederick Douglass. Emily died in 1895. -- HMdb.