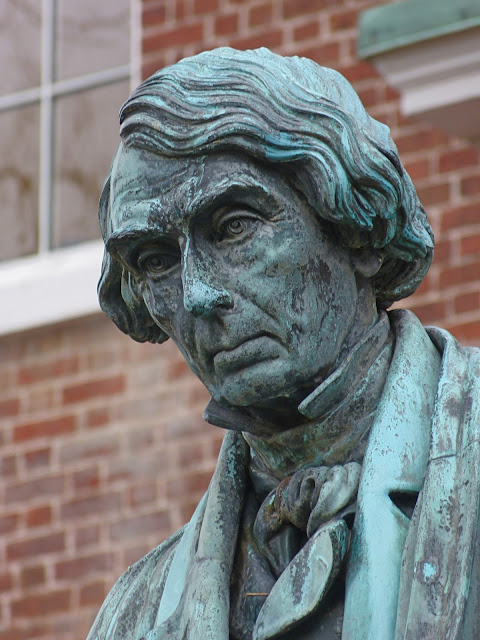 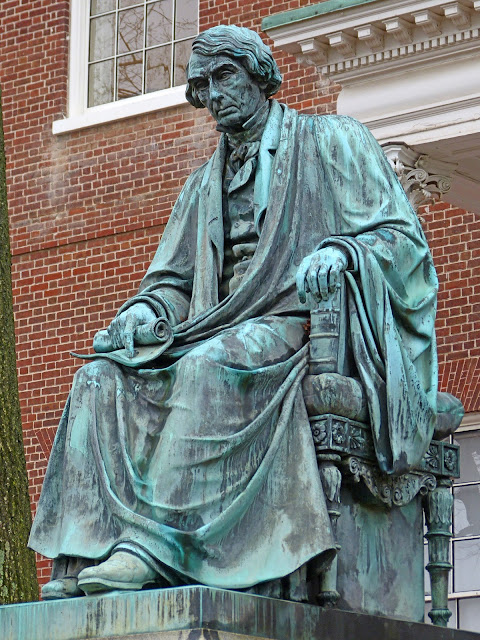 This statue of Roger Brooke Taney by William Henry Rinehart stands in front of the Statehouse in Annapolis Maryland. 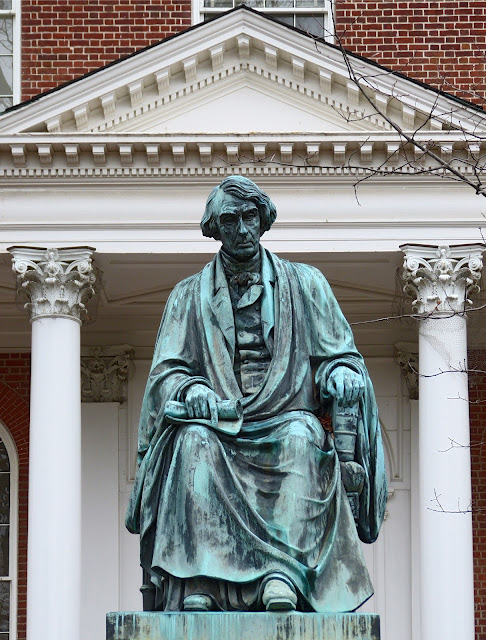 Chief Justice of the United States
of America.


Attorney General of the United States 1831.

Maryland Historical Magazine in 1909 gives this notice of Rinhart's statue in an article entitled Men of Maryland Honored.

" That five thousand dollars or so much thereof as may be necessary, is hereby appropriated to the building, or erecting a suitable monument over the remains of the late Chief Justice Taney, on some suitable site in the State House yard, or in the State House itself." [Chapter 71, Acts of 1867, p. 100.]

" Whereas, it is proper and right that the public service of so great and good a man as the late Chief Justice Taney should be cherished and preserved in the memories of our people, and kept before the youth of our State as worthy of their emulation.

" Be it resolved by the General Assembly of Maryland, That a joint special committee of three on the part of the Senate, and four on the part of the House of Delegates, be appointed to request the Committee appointed under the Act of the Gen­eral Assembly, A. D. 1867, chapter 56 [71], to appear in the Hall of the House of Delegates on the seventeenth day of March next, and joint committee be authorized to secure the services of some distinguished citizen of Maryland to deliver an oration on the life and public services of the late Chief Justice; and, be it further .

" Resolved, That the said special committee be instructed to invite the Governor, the Judges of the Court of Appeals, and other high officials of this State, the Justices of the Supreme Court of the United States, as also the family and relatives of the late Chief Justice, to be present on the occasion.'" [Reso­lution No.2, Acts of 1874.]


Today Roger B. Taney is no longer considered a "great and good man" whose public service "should be cherished and preserved in the memories of our people, and kept before the youth of our State as worthy of their emulation." He is now infamous for his authorship of the Dred Scott Decision (Dred Scott v. Sandford, 60 U.S. 393) in which he writes that:


The Constitution of the United States recognises slaves as property, and pledges the Federal Government to protect it. And Congress cannot exercise any more authority over property of that description than it may constitutionally exercise over property of any other kind. 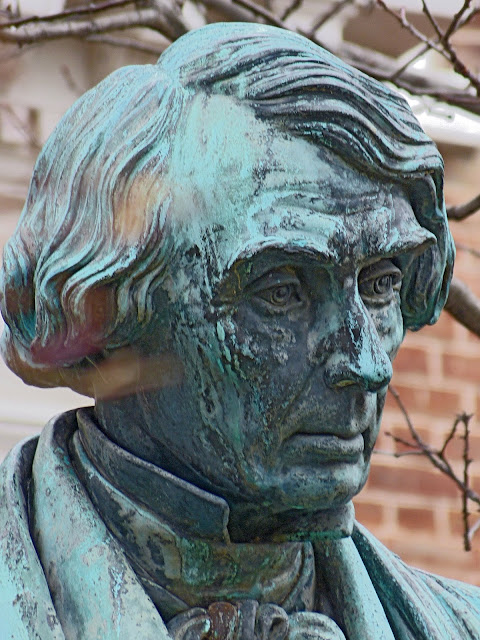 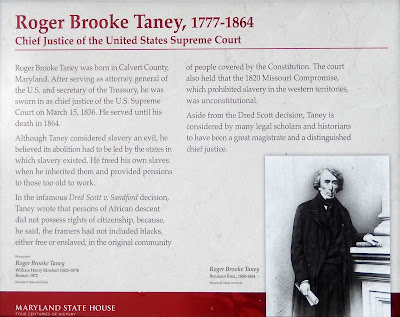 Roger Brooke Taney was born in Calvert County, Maryland. After serving as attorney general of the U.S. and secretary of the Treasury, he was sworn in as chief justice of the U.S. Supreme Court on March 15, 1836. He served until his death in 1864. Although Taney considered slavery an evil, he believed its abolition had to be led by the states in which slavery existed. He freed his own slaves when he inherited them and provided pensions to those too old to work.

In the infamous Dred Scott v. Sanford decision, Taney wrote that persons of African descent did not possess rights of citizenship, because, he said, the framers had not included blacks, either free or enslaved, in the original community of people covered by the Constitution. The court also held that the 1820 Missouri Compromise which prohibited slavery in the western territories, was unconstitutional.

Aside from the Dred Scott decision, Taney is considered by many legal scholars and historians to have been a great magistrate and a distinguished chief justice." -- MD Statehouse, Four Centuries of History. 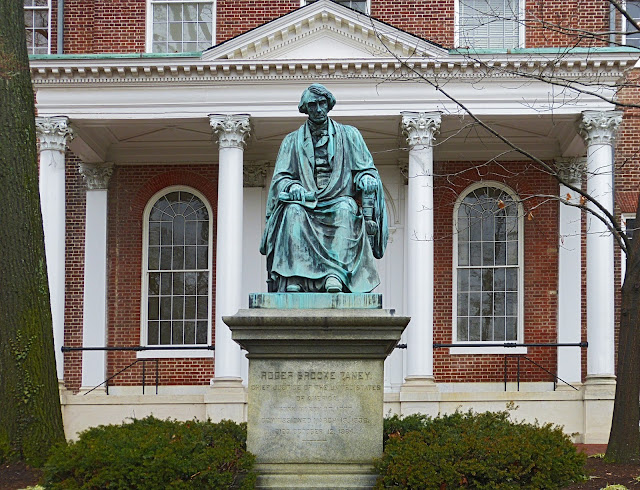 For historical balance the Statehouse also includes this marker about Dred Scott and the decision that bears his name. (Photo by Beverly Pfingsten, HMdb). 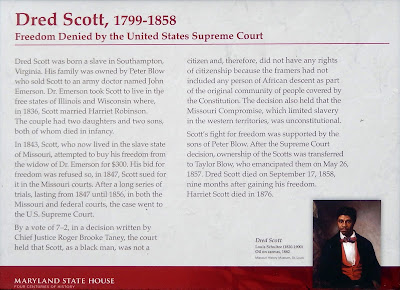 Dred Scott was born a slave in Southampton, Virginia. His family was owned by Peter Blow who sold Scott to an army doctor named John Emerson. Dr. Demerson took Scott to live in the free states of Illinois and Wisconsin where, in 1836, Scott married Harriet Robinson. The couple had two daughters and two sons, both of whom died in infancy.

In 1843, Scott, who now lived in the slave state of Missouri, attempted to buy his freedom from the widow of Dr. Emerson for $300. His bid for freedom was refused so, in 1847, Scott sued for it in the Missouri courts. After a long series of trials, lasting from 1847 until 1856, in both the Missouri and federal courts, the case went to the U.S. Supreme Court. By a vote of 7-2, in a decision written by Chief Justice Roger Brooke Taney, the court held that Scott, as a black man, was not a citizen and, therefore, did not have any rights of citizenship because the framers had not included any person of African descent as part of the original community of people covered by the Constitution. The decision also held that the Missouri Compromise, which limited slavery in the western territories, was unconstitutional.

Scott's fight for freedom was supported by the sons of Peter Blow. After the Supreme Court decision, ownership of the Scotts was transferred to Taylor Blow, who emancipated them on May 26, 1857. Dred Scott died on September 17, 1858, nine months after gaining his freedom. Harriet Scott died in 1876." -- MD Statehouse, Four Centuries of History.

This engraving of Chief Justice Taney published between 1850 and  1864 can be found in the Library of Congress. 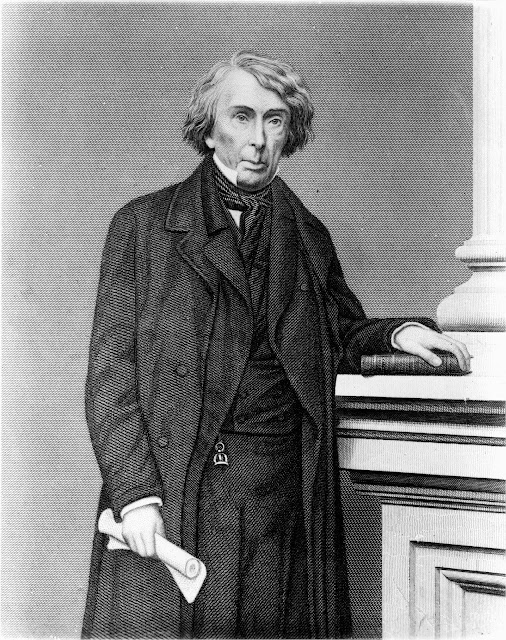 Taney's grave in is St. John's Cemetery in Frederick.
Posted by Allen Browne at 8:40 AM