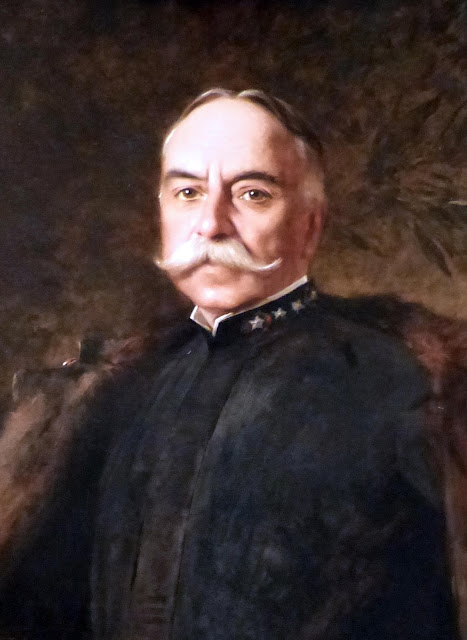 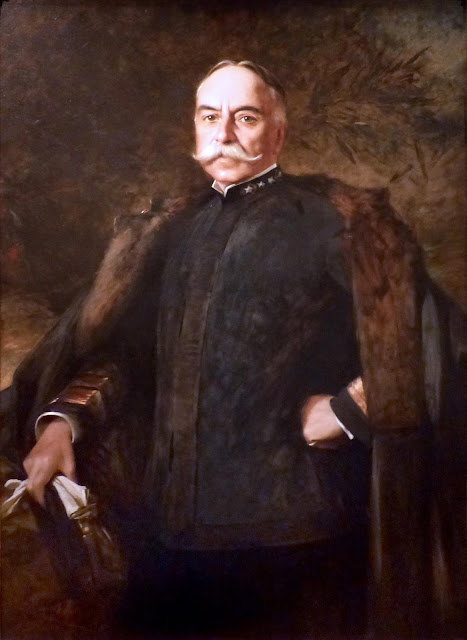 This 1900 portrait of George Dewey by Theobald Chartran hangs in the National Portrait Gallery in Washington DC.


"George Dewey obtained fame during the Spanish ­American War after more than forty years of service. His slow rise through the ranks began at the Naval Academy in Annapolis. During the Civil War, Dewey performed with honor during an assault on New Orleans, earning the rank of lieutenant commander. In 1898, Commodore Dewey gained the command of the Asiatic Squadron stationed in Nagasaki Harbor. With the outbreak of war between Spain and the United States, he was ordered to engage the Spanish fleet stationed near the Philippines. On May 1, Dewey destroyed the fleet and paved the way for U.s. occupation of the islands. Upon his return, Dewey was greeted as a national hero and awarded the rank of admiral. He continued to serve the navy until his death." -- National Portrait Gallery


"Admiral George Dewey was in command of the U.S. Navy’s Asiatic Squadron based in Hong Kong in 1898 when the U.S. declared war on Spain. Commanded to sail to Manila and capture or destroy the Spanish fleet based there, he engaged the fleet in Manila Bay on the morning of May 1 and completely destroyed it by noon, without a single loss of American life. The Battle of Manila Bay was one of two major American naval victories in the Spanish-American War. It was a complete and final victory, ending any threat from the Spanish naval forces involved. All major Spanish ships were destroyed or captured, without any significant damage occurring to the American Forces. The battle is perhaps best known as the occasion Dewey uttered one of the most famous statements in American naval history, 'You may fire when you are ready, Gridley.' Captain Charles Gridley was the commander of the USFS Olympia." -- National Museum of American History