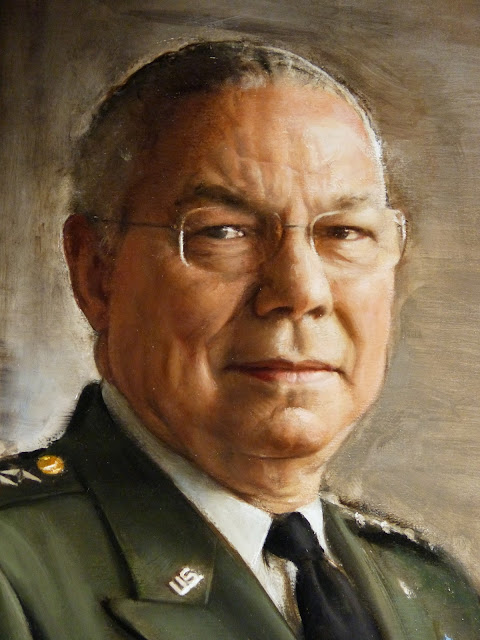 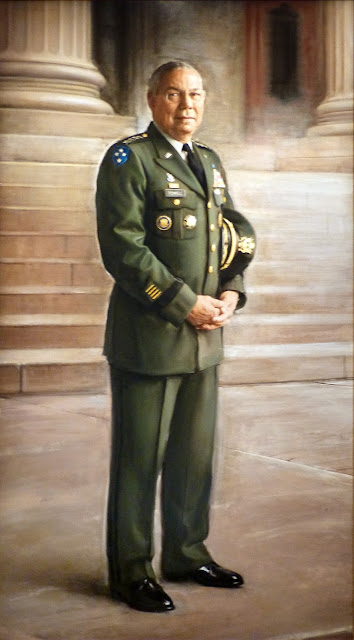 This 2012 painting of Colin L. Powell by Ronald Sherr hangs in the National Portrait Gallery in Washington, DC.


"The son of Jamaican immigrants, retired four-star general Colin L. Powell decided on a military career while at City College of New York. He served in Vietnam, earning a Purple Heart and Bronze Star. A White House Fellowship brought him to the attention of Caspar Weinberger, who made Powell his aide upon becoming President Reagan's secretary of defense. While there, Powell helped to coordinate the invasion of Grenada and bombing of Libya in 1986. Powell became national security advisor in 1987 and chairman of the Joint Chiefs of Staff in 1991 and helped plan Operation Desert Storm. There, he enunciated what became known as the "Powell doctrine" of using 'decisive force' to maximize success and minimize casualties, a reformulation of strategy resulting from the army's unhappiness with the way in which the United States fought the Vietnam War. In 2001 President George W. Bush appointed Powell to be the first African American secretary of state.

After visiting a number of sites relevant to Powell's career, artist Ronald Sherr placed him in front of Theodore Roosevelt Hall at National War College at Fort McNair in Washington." -- National Portrait Gallery