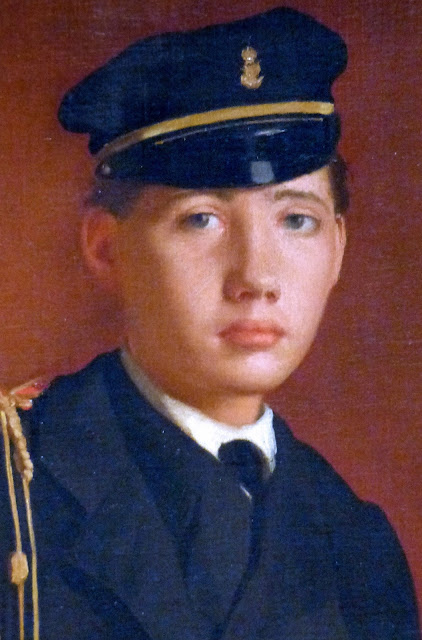 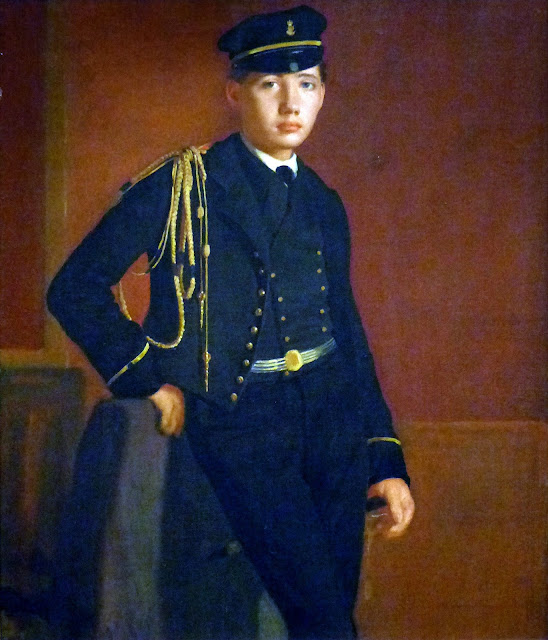 This 1856/1857 portrait of Achille De Gas in the uniform of a Cadet by his brother Edgar Degas hangs in the National Gallery of Art in Washington DC.


"The archives of the Lycée Louis-Le-Grand, as well as those of the Service Historique de la Marine, describe the handsome Achille as a turbulent, often impulsive boy and a  consistently average student. When he entered the Naval Academy, before the age of  seventeen (he was born on 17 November 1838), he went essentially unnoticed; but in July 1858, while a midshipman. he was put under close arrest and threatened with dismissal for unruliness and insubordination. The intervention of Auguste De Gas, ask.ing the naval  minister to offer the young man "an assignment that would enable him to make amends for his past mistakes," helped resolve the situation. Achille briefly continued his naval career, without incident. first as a midshipman first-class (6 February 1860) and then as  a naval ensign (8 February 1862), before resigning on 17 November 1864, disappointed by the uneventful life he was leading. He later founded, along with René, the firm of De Gas Brothers in New Orleans. During the war with Germany, he entered the service again for several months (from 12 November 1870 to.1 March 1871) and, temporarily restored to his former rank, served on the Loire." -- Jean Sutherland Boggs in the cataloque of an exhibition at the Museum of Modern Art in 1988

In 1866, Achille De Gas posed as the jockey in Edgar Degas' Scene from the Steeplechase: The Fallen Jockey.(NPG photo) 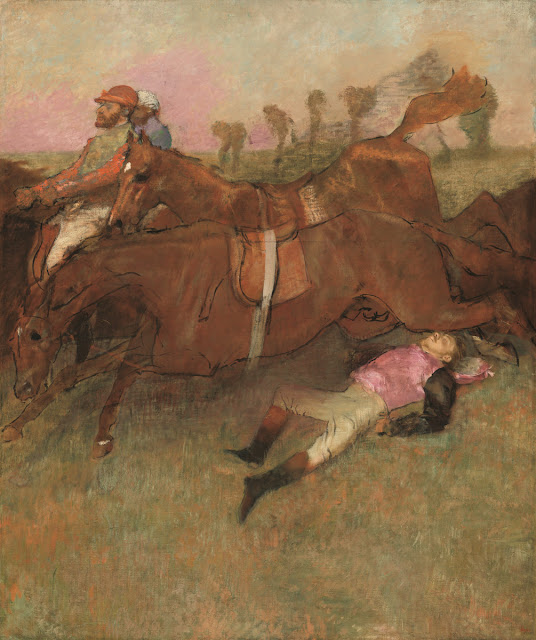 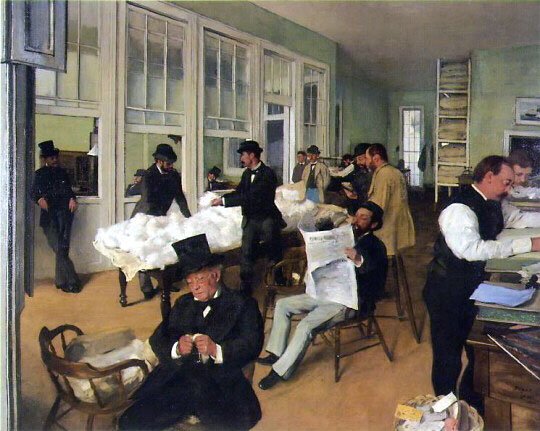 In 1875, Achille De Gas was involved in the Bourse Scandal. Marylyn R. Brown Tells the Story.


"...Keeping in mind these broader financial trends, one can nonetheless see how the DeGas family 's situation could only have been exacerbated by Achille DeGas scandalous escapade at the Paris stock exchange in 1875. The ostensibly detached flâneur depicted near the left margin of A Cotton Office Office in New Orleans was involved in a shooting incident on 19 August 1875, on the steps of the Bourse. in a melodramatic event that wounded the family pride and finances even further. The incident made the front page of the Paris-journal on 2l August. It was likewise reported in detail in Le Figaro and both newspapers subsequently provided follow-up articles. According to the reports. Achille DeGas, being accosted and beaten with a cane by an engineer named Victor-Georges Legrand. had pulled a revolver and grazed his assailant. DeGas (spelled both 'Degas' and 'DeGas' in the newspapers) spent thirty-six hours in a police station. In court on 24 September. it came to light that Legrand was jealous of his wife. a former dancer, who had once been Achille DeGas's mistress, and had borne him a child who had died. Achille had evidently begun to see the woman, Therese Mallot, again and had given her some 2,000 francs. The court sentenced Achille to two months in jail and Legrand to one month. and each was assigned half the court expenses.

Although Edgar Degas himself was not mentioned in the newspapers, two of the articles discussed in detail the family's honorable reputation. its banking firm, its connections in America and Italy, and the 'considerable fortune' that the death of Auguste DeGas had supposedly left Achille. The Paris-journal in particular referred to Achille DeGas's violent act as 'Americanized' and blamed his habit of carrying a revolver on the time he had spent in the United States. Despite Edgar Degas's apparent silence on the Bourse incident, it was known to his friends. Berthe Morisot wrote to her mother directly after hearing about it in London; and Eugene Manet wrote to Berthe Morisot during the autumn of the same year about visiting a very worried Achille DeGas just before the court hearing." -- Marilyn R. Brown, Degas and the Business of Art, 1994.