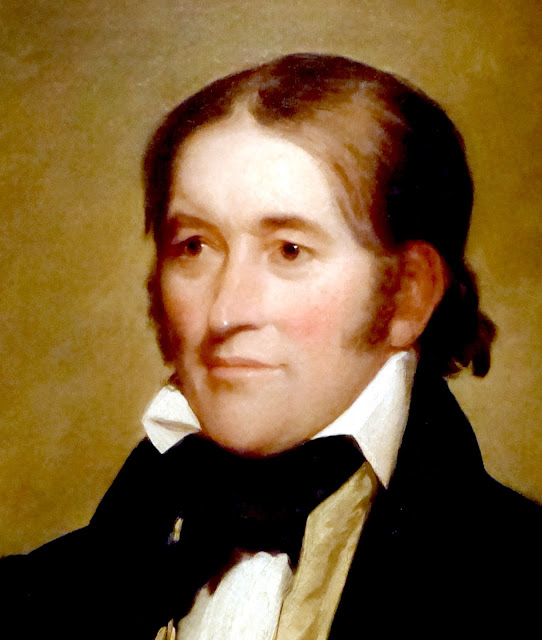 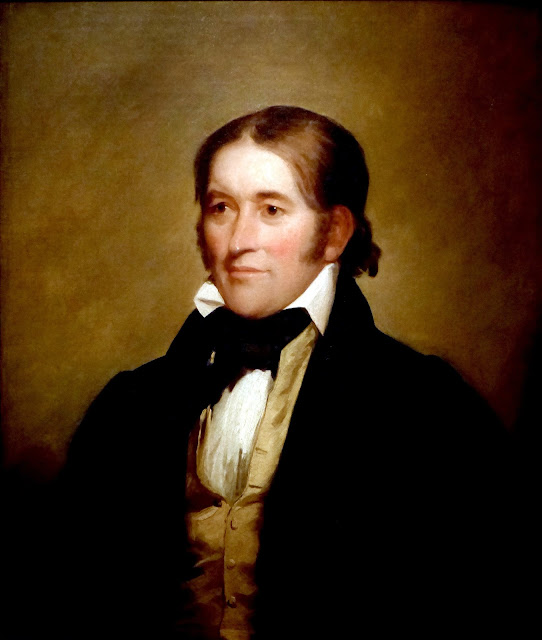 This 1834 portrait of Davy Crockett by Chester Harding hangs in the National Portrait Gallery in Washington, DC.


"Unlike his solitary predecessor Daniel Boone, Davy Crockett created the image of the frontiersman as a jocular, colorful 'type' who loved tall tales, whisky, and cutting a caper. Crockett was a bad farmer and kicked around the Southeast, serving in the military and minor governmental offices. On a whim he ran for Congress from Tennessee, serving three terms (1827-31, 1833-35). To capitalize on his political fame, he authored an autobiography containing a motto, 'Be always sure you're right then go ahead,' that has been the credo of the frontiersman, in reality and myth, to the present day. After Congress, Crockett created a road show in which he presented himself to civilized eastern audiences as the wild and woolly backwoodsman, 'half man, half alligator.' Still restless, however, Crockett joined the fight for Texas independence and was killed at the Alamo." -- National Portrait Gallery

The NPG further describes Crockett and Harding's painting this way:


"Davy Crockett, the famous frontiersman from Tennessee, was serving in the United States House of Representatives in 1834 when he went on a speaking tour of eastern cities that was designed to promote the interests of the anti-Jacksonian Whig Party. During his stay in Boston, he sat for his portrait to Chester Harding, then the city's most popular portrait painter. The image agrees with a contemporary description: 'Colonel Crockett is an uncommonly fine looking man. His face has an exceedingly amiable expression and his features are prominent and striking. He wears his hair which is black, (with a light shade of brown) parted down the centre of his forehead, combed back from his temples, and ending in a slight curl at the neck not unlike the simple manner of many of the clergy.' Less than two years later, in 1836, Crockett met his untimely death during the war for Texas's independence from Mexico, at the Battle of the Alamo."


This picture of Davy Crockett appeared in "Buffalo" Bill Cody's Story of the Wild West, c. 1888. 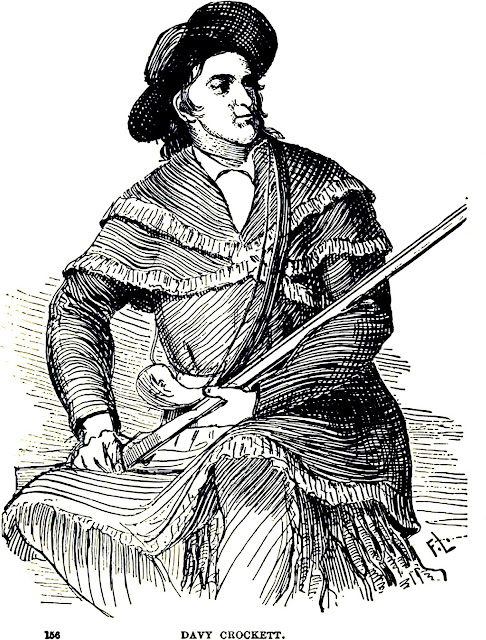 Perhaps a more familiar image of David Crockett is his portrayal by Fess Parker in the eponymous Disney mini-series (the first TV show of that type).