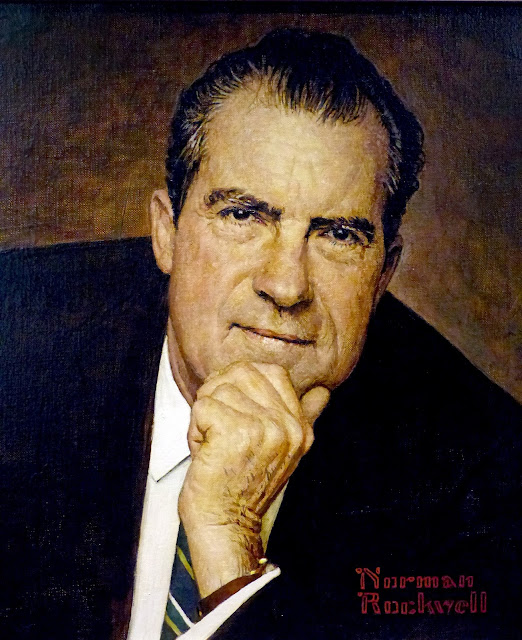 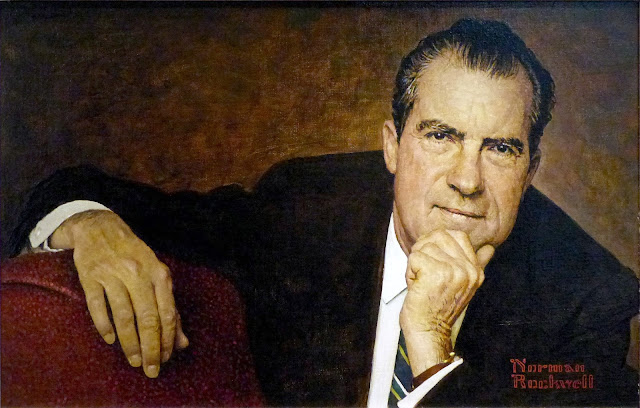 This 1968 portrait of Richard M. Nixon by Norman Rockwell hangs in the National Portrait Gallery in Washington DC.


"Richard Nixon owed his election as Dwight Eisenhower's vice president to his early reputation as an anti-Communist. By the time he became president in 1968, however, his thinking had shifted considerably. As a result, under his leadership, the confrontational strategies that had long dominated this country's response to Communism gave way to a historic detente, marked by American recognition of Communist China and better relations with the Soviet Union.

These achievements, however, were eventually overshadowed by disclosure of the Watergate scandals a web of illegal activity involving scoresof Nixon's advisers. Although never implicated in the origlnal crimes, Nixon did become party to attempts to cover them up. Following irrefutable disclosure of that fact, he became the only president ever to resign from office.

Artist Norman Rockwell admitted that he had intentionally flattered Nixon in this portrait. Nixon's appearance was troublesomely elusive, Rockwell noted, and if he was going to err in his portrait he wanted it to be in a direction that would please the subject." -- National Portrait Gallery