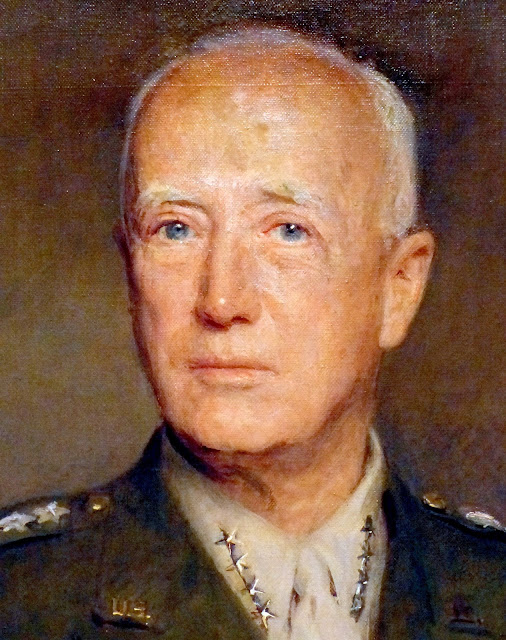 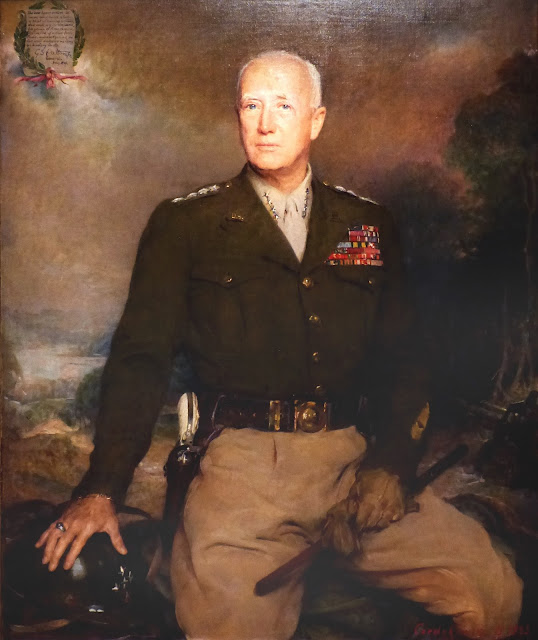 This 1945 portrait of George Patton by Boleslaw Jan Czedekowski hangs in the National Portrait Gallery in Washington DC.


"Nicknamed 'Old Blood and Guts,' General George Patton Jr. had a penchant for harsh, bluntly spoken opinions that sometimes made him the object of controversy during World War II. There was, however, no debating his soldiering abilities. In the Allied drive against Axis armies in North Africa, his gift for instilling frontline discipline was critical in shaping unseasoned American soldiers into effective fighting units. His leadership proved crucial again in the invasion of Sicily, but his finest moment came during the massive German counter offensive in northern Europe's Ardennes region in 1944-45. His part in repelling the Germans there placed beyond challenge his reputation as one of the most brilliant field commanders of the war.

The inscription in the portrait's upper left corner was from Patton's declaration of May 9, 1945, telling his soldiers what an honor it had been to lead them." -- National Portrait Gallery

The last sentence of Patton's Order 98, May 1945, marking the end of WWII appears in the upper left corner of this painting. 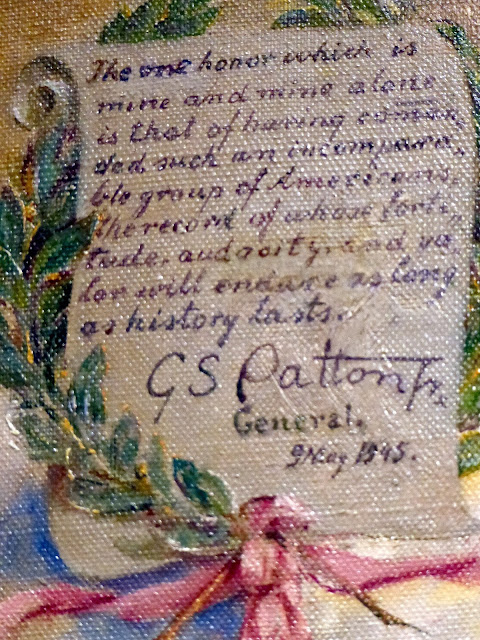 "The one honor which is mine and mine alone is that of having commanded such an incomparable group of Americans, the record of whose fortitude, audacity, and valor will endure as long as history lasts."  G. S. Patton, Jr. General, 9 May 1945.

The Portrait Gallery gives a further description of Patton and this portrait.


"... General George S. Patton's penchant for colorful commentary and outspokenness frequently made him the object of controversy during his long and impressive career. Born in San Gabriel, California, he graduated from the United States Military Academy at West Point in 1909. He first went to Europe in 1917 as part of General John J. Pershing's staff, where he directed the American Tank Center in France and was head of the 304th Brigade of the Tank Corps.

His experience with tanks led General Dwight Eisenhower to place him in charge of one of the three task forces invading North Africa during World War II. Subsequently, Patton trained and supervised the successful landing of the Seventh Army in Sicily. But his finest moment came during the massive German counteroffensive in the Ardennes in 1944 and 1945. By the time the Allies had repelled the Germans there, his reputation as one of the most brilliant field commanders of the war was unassailable.

Patton sat for Boleslaw Czedekowski, a Polish artist who had painted many European notables, at his military headquarters in Germany shortly after the German surrender in May 1945. A stickler on military dress, he wears the ivory-handled pistol that was one of his sartorial trademarks." -- NPG 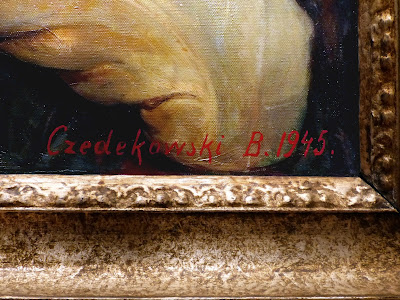