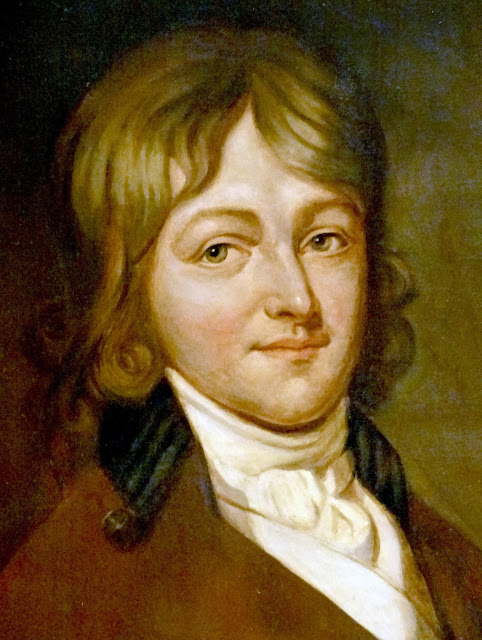 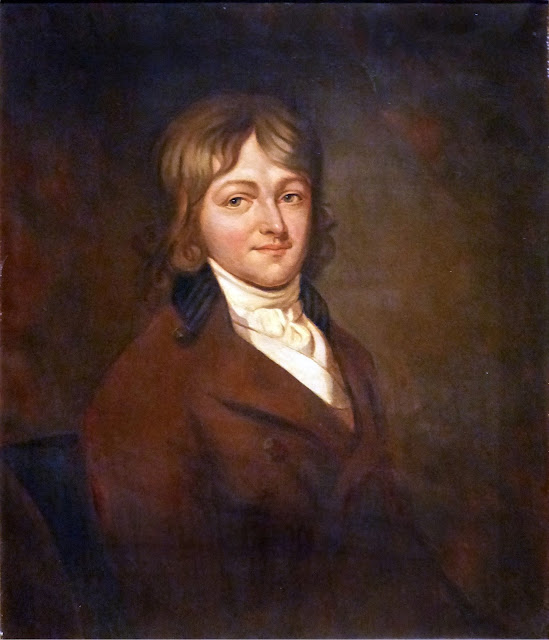 This 1902 portrait of Francis Scott Key by Dewitt Clinton Peters (after Rembrandt Peale) hangs in the Maryland Historical Society Museum in Baltimore Maryland.


"Francis Scott Key was born on August 1, 1779, in western Maryland. His family was very wealthy and owned an estate called "Terra Rubra." When Francis was 10 years old, his parents sent him to grammar school in Annapolis. After graduating at the age of 17, he began to study law in Annapolis while working with his uncle's law firm. By 1805, he had a well-established law practice of his own in Georgetown, a surburb of Washington, D.C. By 1814, he had appeared many times before the Supreme Court, and had been appointed the United States District Attorney.

Francis Scott Key was a deeply religious man. At one time in his life, he almost gave up his law practice to enter the ministry. Instead, he resolved to become involved in the Episcopal Church. Because of his religious beliefs, Key was strongly opposed to the War of 1812. However, due to his deep love for his country, he did serve for a brief time in Captain George Peter's Georgetown Light Field Artillery in 1813.

Following the British capture of Washington on August 24, 1814, Dr. William Beanes, a prominent physician was taken prisoner by the British. Since Key was a well-known lawyer, he was asked to assist in efforts to get Dr. Beanes released. Knowing that the British were in the Chesapeake Bay, Key left for Baltimore. There Key met with Colonel John Skinner, a government agent who arranged for prisoner exchanges. Together, on September 5, they set out on a small American flag-of-truce vessel to meet the Royal Navy.

On board the British flagship, HMS Tonnant, the officers were very kind to Key and Skinner. They agreed to release Dr. Beanes. However, the three men were not permitted to return to Baltimore until after the bombardment of Fort McHenry. The three Americans were placed aboard the American ship, and waited behind the British fleet. From a distance of approximately eight miles, Key and his friends watched the British bombard Fort McHenry.

After 25 hours of continuous bombing, the British decided to leave since they were unable to destroy the fort as they had hoped. Realizing that the British had ceased the attack, Key looked toward the fort to see if the flag was still there. To his relief, the flag was still flying! Quickly, he wrote down the words to a poem which was soon handed out as a handbill under the title "Defence of Fort McHenry." Later, the words were set to music, and renamed "The Star Spangled Banner." It became a popular patriotic song. It was not until March 3, 1931, however, that it became our national anthem.

After the war, Francis Scott Key continued to live a very religious life. He was well-liked by his friends and was active in society. On January 11, 1843, while visiting his daughter in Baltimore, Key died of pleurisy. To honor the author of "The Star Spangled Banner," there are monuments at Fort McHenry and on Eutaw Place in Baltimore, and at the Presidio in San Francisco, California." -- National Park Service - Fort McHenry 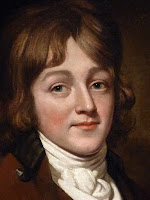 In 2017 the original Rembrandt Peale portrait appeared at the National Portrait Gallery.
Posted by Allen Browne at 12:32 PM