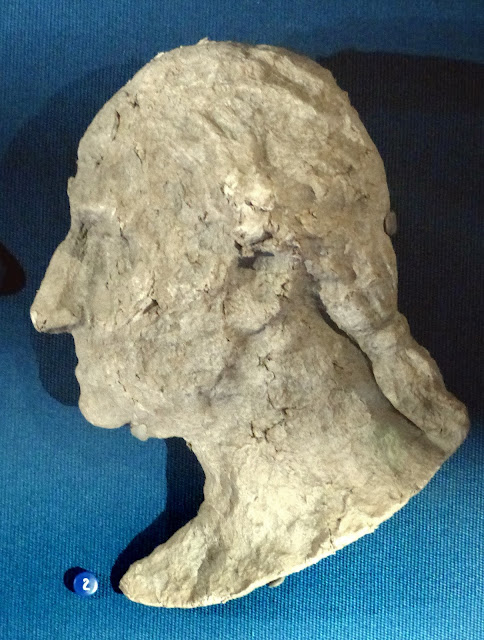 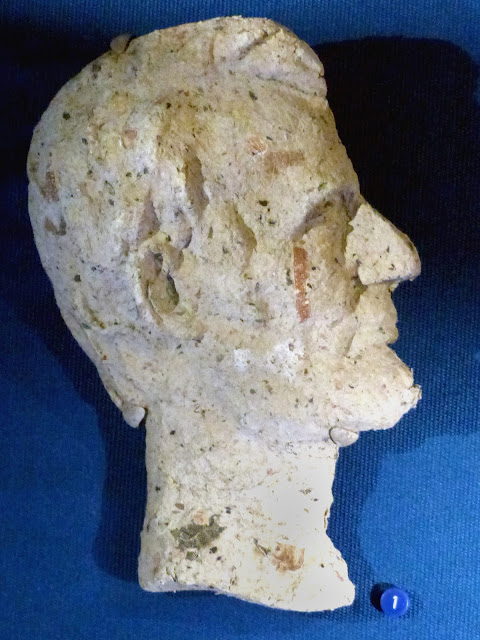 The two portraits of famous presidents were made of macerated money by an unknown artist as part of a thriving turn of the 20th century trade in souvenirs made from recycled money. These two hang in the Smithsonian Museum of American History. 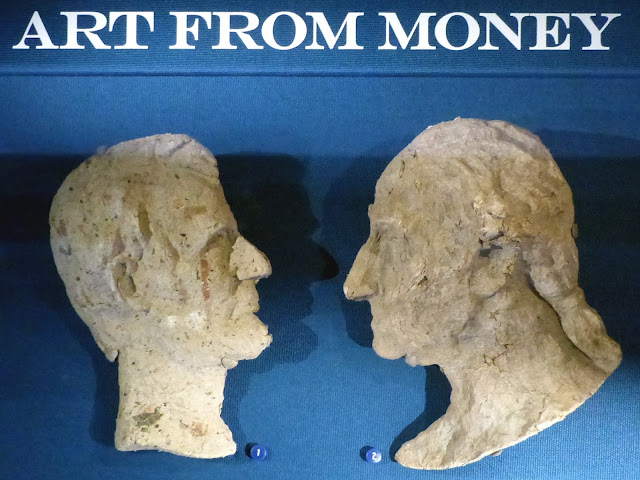 These busts of American presidents George Washington and Abraham Lincoln are made from notes. The notes were macerated, that is, soaked in water to break them down and then converted into pulp. The remaining material was then transformed into sculpture, similar to paper-maché artwork. Fragments of the designs of national notes are visible on Lincoln's neck. -- SMAH

Streets of Washington Blog, described this phenomenon in  Tourist Trap: Macerated Money at The Treasury Department.

The Numismatic Bibliomania Society says this:

Paper currency did not come into general use until the Civil War. An act of Congress in 1862 authorized the Treasury Department to come up with a method for destroying old paper notes that were no longer fit for circulate. Between 1874 and 1942, the Federal Reserve disposed of worn-out currency by soaking it into a pulp. Enterprising people, who may have been early recyclers, discovered that the pulp could be used like papier-mache to form shapes. Souvenir companies bought macerated paper by the ton and the graded greenbacks were reborn. The process was discontinued when the Federal Reserve started burning old bills. Sometimes, the item was labeled with how much money was used to make the piece such as, "Made of U.S. National Greenbacks redeemed and macerated at the U.S. Treasury, estimated $5,000." -- E-Sylum.

The National Souvenir Company placed this ad in the Washington Star in 1921 for a souvenir of the U. S. Capitol molded from $3000 in macerated money.

U.S. Greenbacks  redeemed by the U.S. Treasury and moulded into a beautiful  souvenir of the U.S. Capitol building. $3000. of macerated money in each. Price 25¢. Hand painted in colors with ribbon and attachment for hanging, 50¢. Supply limited.

The Library of Congress has this photo of the “Bureau Printing & Engraving Destruction Committee” feeding a maceration cylinder with bills in 1914. 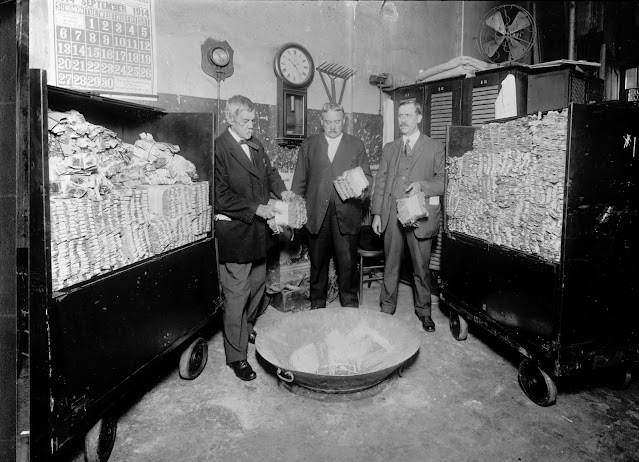 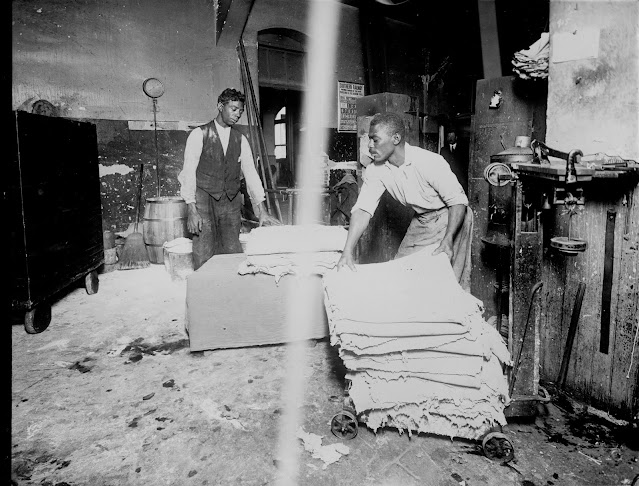 This earlier image of the macerator appeared in the Savannah Morning News in 1901. 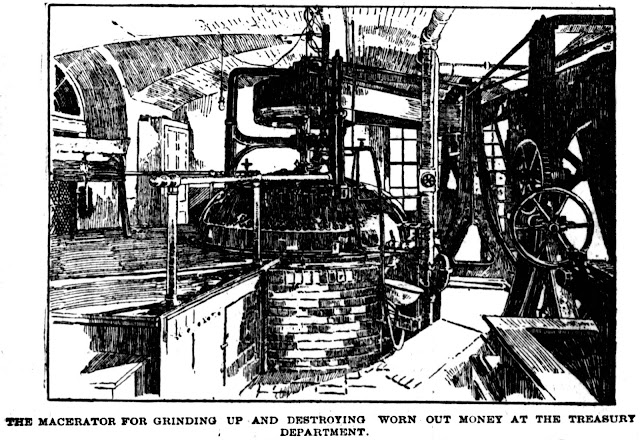 The Macerator for Grinding up and Destroying Worn Out Money
At the Treasury Department.
The 1901 article by Waldon Fawcett entitled “Billions in His Trade” profiles Henry Martin a Washington character and  moulder of macerated money on Capitol Hill. Fawcett imlpies that Martin may be the only macerated money moulder.  (The full article is worth reading). 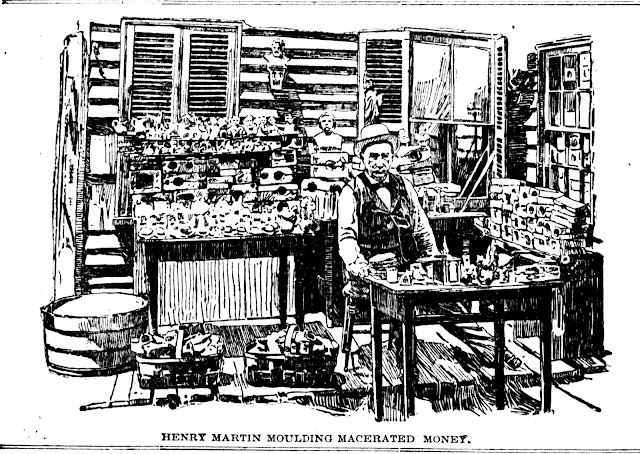 Henry Martin Moulding Macerated Money.
In 2020, Carrol Highsmith photographed this “Million Dollar Man” made by Jim Shore out of more than $1 Million in macerated money. It's in the Ripley's Believe It Or Not museum in St. Augustine, Florida. (LOC) 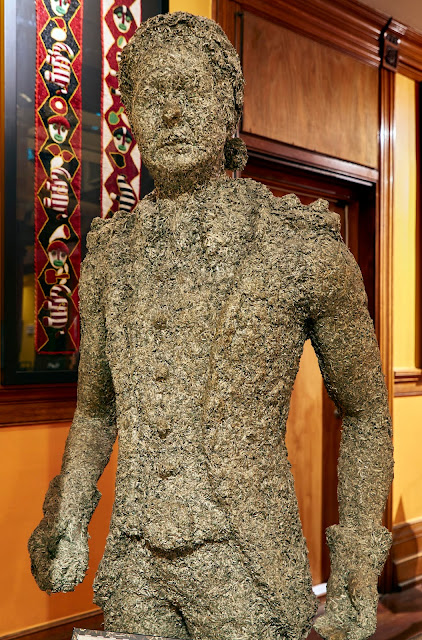