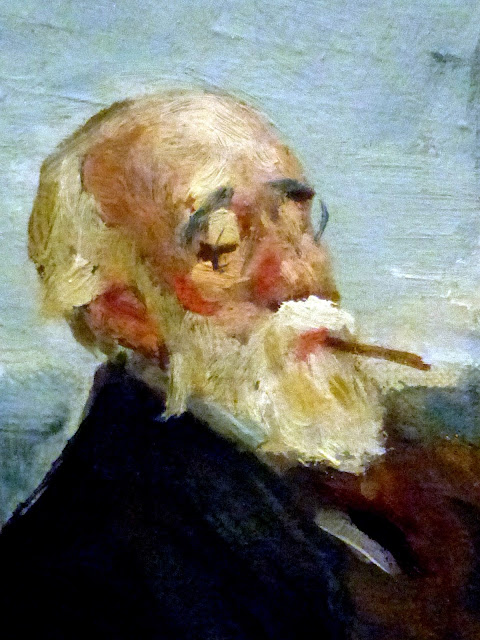 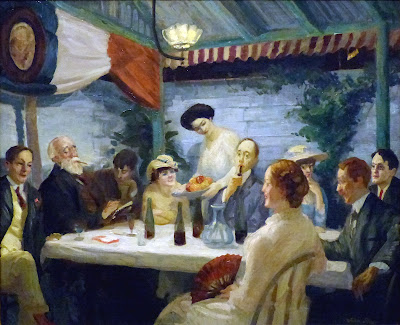 John Sloan's painting Yeats at Petitpas’ hangs in the National Gallery of Art in Washington, DC.

This scene depicts a lively gathering of poets and artists at Petitpas', a French restaurant and boardinghouse in the Chelsea district of Manhattan. Shown from left to right around the table are literary critic Van Wyck Brooks; painter John Butler Yeats; poet Alan Seeger; the artist's wife, Dolly Sloan; Celestine Petipas (standing); fiction writer Robert Sneddon; miniature painter Eulabee Dix; John Sloan, the artist (corner); Fred King, the editor of Literary Digest; and, in the foreground, Vera Jelihovsky Johnston, wife of the Irish scholar Charles Johnston.
Associated with the Ashcan school—a group of urban realists who espoused the notion of “art for life's sake” instead of “art for art's sake”—John Sloan was well known for his scenes of everyday life. This lively representation of assembled artists and friends comes out of that context, as gatherings such as this were common at the time. John Butler Yeats, Irish painter and father of poet William Butler Yeats, lived at Petitpas' from 1909 until his death in 1922 and presided nightly at a table in the courtyard. By 1910, when Sloan began this painting, Yeats had become a significant mentor to the artist, especially in his detailed and methodical approach to portraiture. It is notable that Sloan chose to depict Yeats drawing a portrait rather than engaging in the lively conversation for which he was so well known. Sloan's rendering of his own likeness is also noteworthy as one of the most carefully executed and complete within the painting. These choices by Sloan invite a reading of this work as a tribute to the elder Yeats and his significant influence on the artist. The painting also functions as a commemoration of the year 1910 in general, a time of several professional accomplishments for Sloan, some of which were celebrated at this famed restaurant. -- NGA

Yates is shown working on a portrait while Alan Seeger looks on. (Seeger wrote I Have a Rendezvous with Death and died in WWI.) 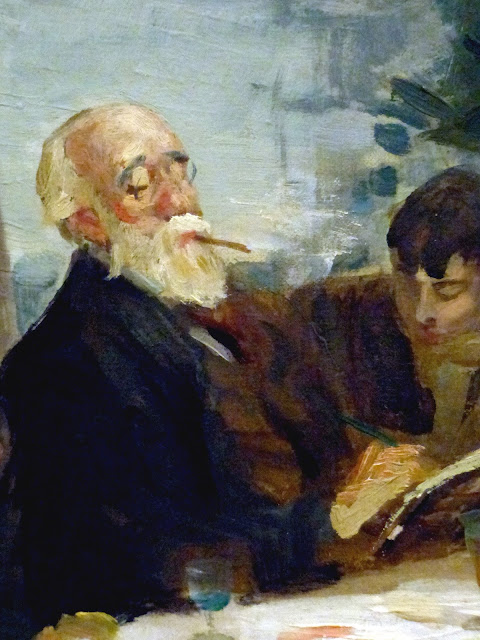 The subject of Yeats’ work seems to be John Sneddon who sits at the center of the painting and seems to dominate it. Indeed, I believed on first seeing this painting that this must be the “Yeats” of the title and so must have been intended to portray William B. Yeats. 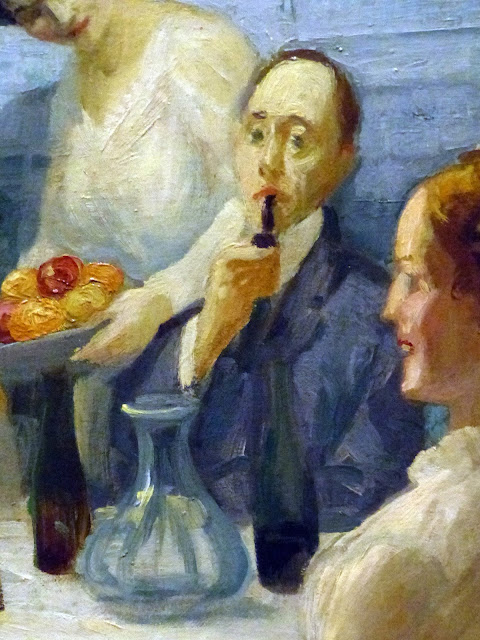 Robert W. Sneddon
Presumably the resulting portrait is this one which hangs in the Delaware Museum of Art. 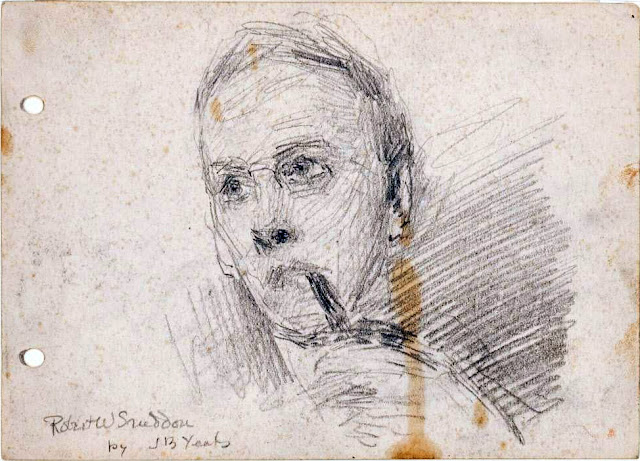 Robert Sneddon
by J B Yeats
Sneddon was a writer of “Popular” works, which is to say pulp-fiction. For example, he wrote 4 ghost stories under the pseudonym of “Mark Shadow.”  A 1931 Courtroom Stories magazine with this cover by Walter M. Baumhofer contains Sneddon's treatment of the The Trial of Oscar Wilde. 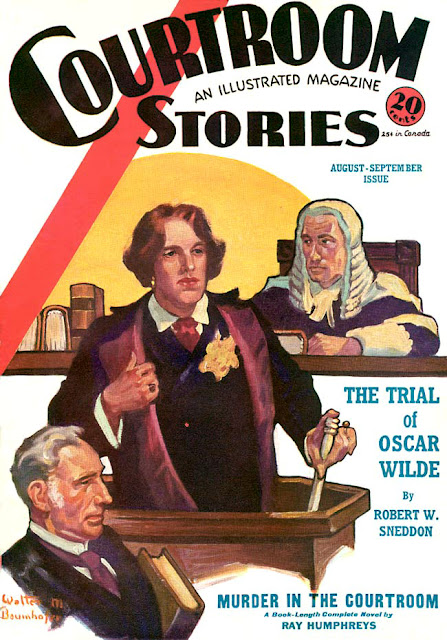 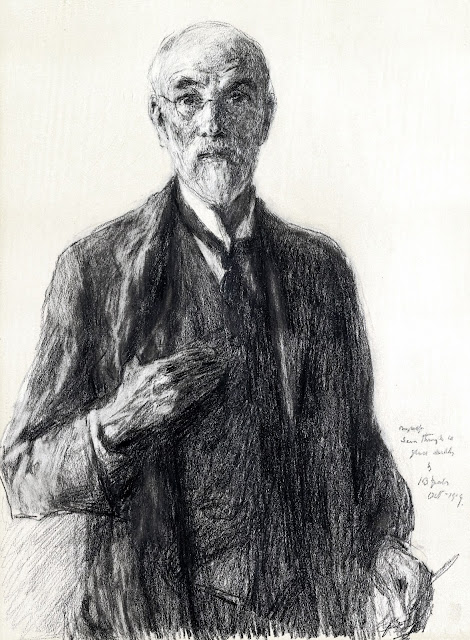 Myself
seen through a
glass darkly
by
JB Yeats
Oct - 1919
The Library of Congress has this photo entitled “John Butler Yeats, Irish artist and father of William Butler Yeats” by Alice Boughton taken between 1900 and 1920. 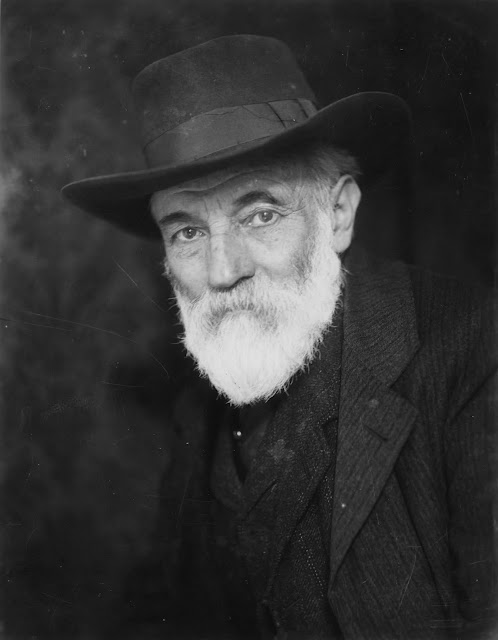