The Last of the Tribes 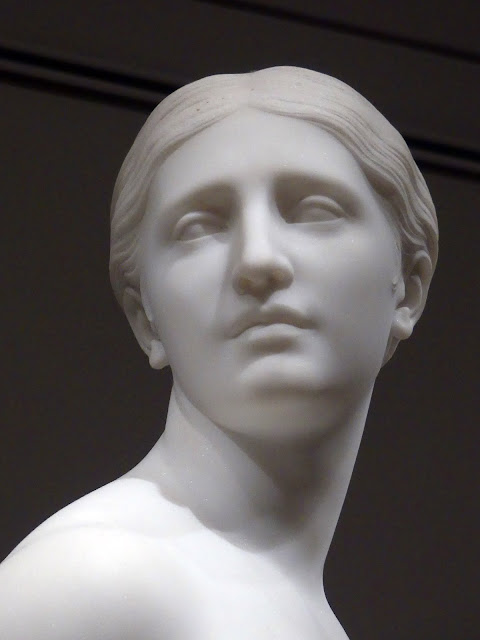 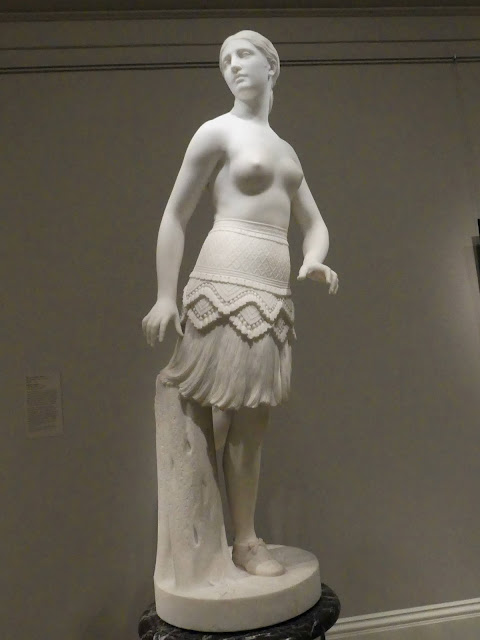 
The Indian Removal Act of 1830 signaled the start of official United States government policy to force Native Americans off of their ancestral lands and on to reservations. Those Indians who agreed to treaties were driven into regions held by other tribes who fought to preserve their own territories. What ensued was a generation of Indian removals and devastating conflict.

The history of Indian survival in the face of such oppression and forecast doom is an inspiring story for our times. Powers wrote that he intended this work to represent “the last of them all fleeing before civilization [and] looking back in terror.” He based his conception on James Fenimore Cooper's Last of the Mohicans, drawing on the author's romantic tale of the disappearance of the country's native inhabitants. -- SAAM 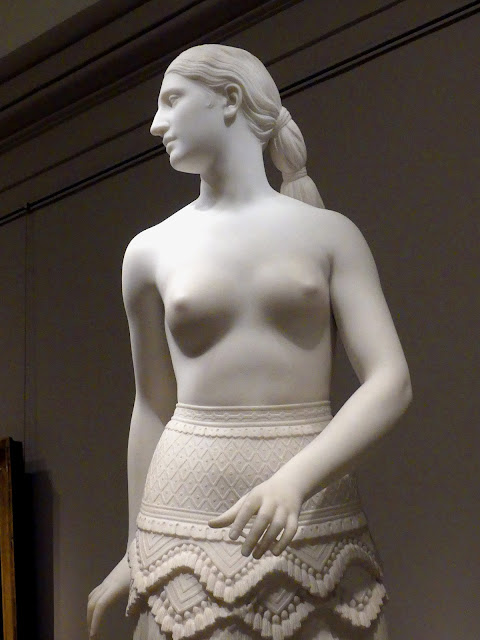 The Museum of Fine Arts in Houston, Texas, has an instance of this popular statue. An article describing MFAH's acquisition  of the statue comments  on the chronological relationship between the two.


The Last of the Tribes was the last full-length ideal sculpture created by Powers before his death in 1873. The sculpture is the first of two versions. The other, at the National Museum of American Art, was carved after the artist's death. In the version acquired by the MFAH, Powers oversaw the carving of the head and neck before he died. As was the custom in the nineteenth-century sculptor's studio, the sculptor's apprentices did the carving. In this case, Remigio Peschi, Powers's principal workman for over three decades, did the work. 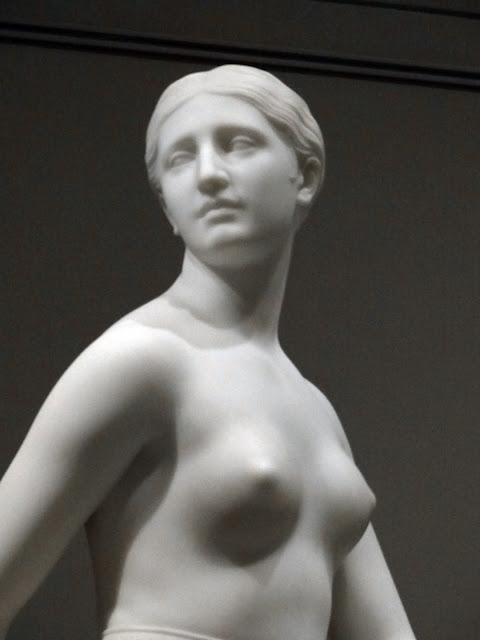 Google Art and Culture says this about MFAH's version.


According to Hiram Powers, the most celebrated American sculptor of the 19th century, this partially nude marble figure represents a Native American woman who is “running in alarm, looking back in terror, fleeing before civilization.” The sculpture illustrates the view, popular at the time, of Native Americans as “noble savages,” doomed to extinction because their traditional ways were being threatened by the westward expansion of the United States.

In The Last of the Tribes, graceful, undulating lines capture all the nuances of the figure's form and demeanor. The subject is dressed in an exquisitely detailed skirt, with diamond patterning throughout end tassels that give the sense of movement as she runs. Part contemplative mood, as suggested in the graceful and noble turn of her heed, and part high drama (she flees from cultures in conquest), this sculpture projects a poignant and romantic image of so-celled vanishing culture shortly before the Indian Wars ended native self-autonomy.

Of note is that Powers accomplished this effect from his vantage point of Florence, Italy, using an Italian women as model end creating a fantastical costume that never existed in any Native American culture (except for the Ohio moccasins she wears that apparently formed a part of Powers's studio collection.) This potent combination of fantasy, romance, and morality often permeates art of the Victorian era. -- Google Art & Culture 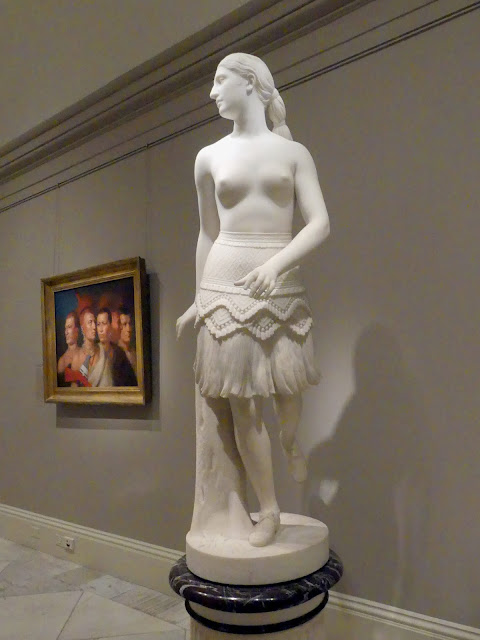 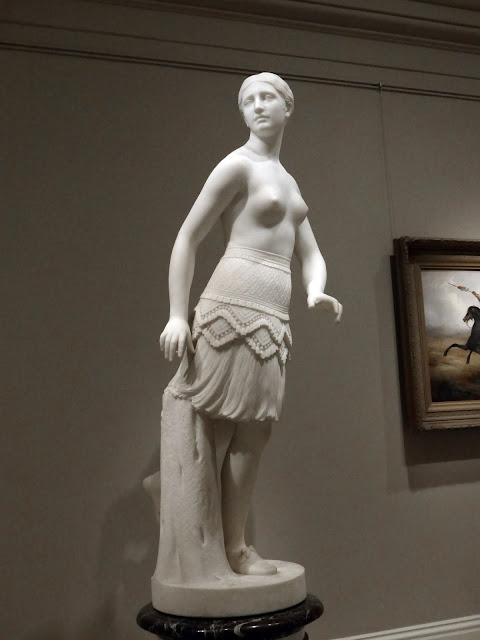 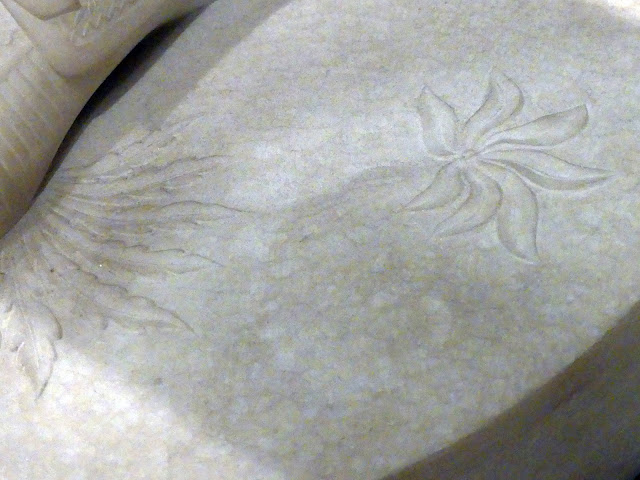 Like James Fenimore Cooper’s Last of the Mohicans, this work seems to express a Euro-American fantasy in which the country’s original inhabitants would quietly and poetically disappear. -- SAAM 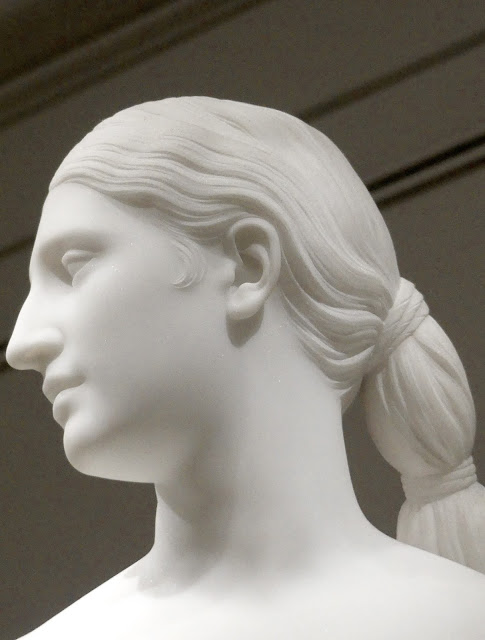