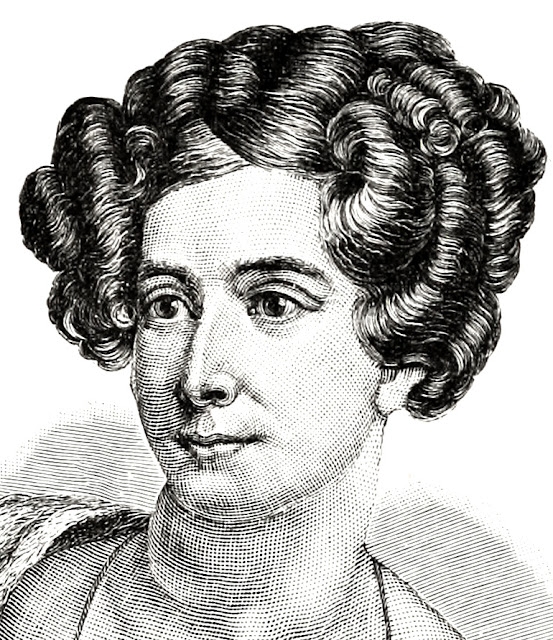 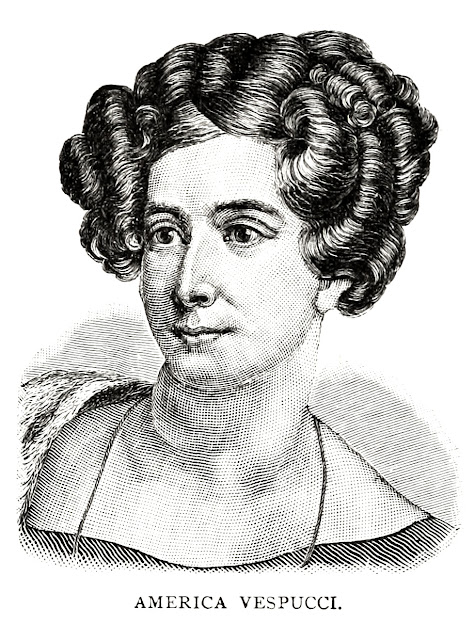 This picture of “America Vesupucci” appeared in Perley's Reminiscences of Sixty Years in the National Metropolis, 1886 by Benjamin Perley Poore.  Perley tells the story this way:

A decided sensation was created at Washington during the Van Buren Administration by the appearance there of a handsome and well-educated Italian lady, who called herself America Vespucci, and claimed descent from the navigator who gave his name to this continent. Ex-President Adams and Daniel Webster became her especial friends, and she was soon a welcome guest in the best society. In a few weeks after her arrival, she presented a petition to Congress asking, first, to be admitted to the rights of citizenship; and, secondly, to be given “a corner of land” out of the public domain of the country which bore the name of her ancestor. An adverse report, which was soon made, is one of the curiosities of Congressional literature. It eulogized the petitioner as “a young, dignified, and graceful lady, with a mind of the highest intellectual culture, and a heart beating with all our own enthusiasm in the cause of America and human liberty.” The reasons why the prayer of the petitioner could not be granted were given, but she was commended to the generosity of the American people. “The name of America—our country's name—should be honored, respected, and cherished in the person of the interesting exile from whose ancestor we derive the great and glorious title.”
A subscription was immediately opened by Mr. Haight, the Sergeant-at-Arms of the Senate, and Judges, Congressmen, and citizens vied with one another in their contributions. Just then it was whispered that Madame Vespucci had borne an unenviable reputation at Florence and at Paris, and had been induced by a pecuniary consideration to break off an intimacy with the Duke of Orleans, Louis Philippe's oldest son, and come to Washington. Soon afterward the Duke's younger brother, the Prince de Joinville, came to this country, and refused to recognize her, which virtually excluded her from reputable society. For some years subsequently she resided in luxurious seclusion with a wealthy citizen of New York, in the interior of that State, and after his death she returned to Paris.

In person, she had the style of beauty which one sees in the finest statues of the antique —a noble head, regular and expressive features, a fair and stately neck, dark eyes, dark hair, beautiful lips and teeth, a fine expanded chest, well-rounded arms, white and delicate hands, small feet, and an exquisitely graceful figure of the middle size. She appeared in a simple yet elegant and well-made dress of black silk, trimmed with deep lace. Her head was marked by a classic grandeur, though without any kind of ornament but her rich and exuberant hair; her voice was full of music; and in her look and expression, dignity and sweetness were happily blended. Her age appeared to be about twenty-five or twenty-six, and her whole deportment presented the most agreeable combination of dignified self-respect with refinement, polish, and ease, that I ever remember to have witnessed. Though opposed to royalty, and coming to seek an asylum in a republic, she looked, and spoke, and moved, as if she were “every inch a queen.”

The Frederick Remington Museum in Ogdensburg NY has this painting of America Vespucci by an unknown artist.(see Allen Walker Read, America's Ingratitude for Its Naming, 1986) 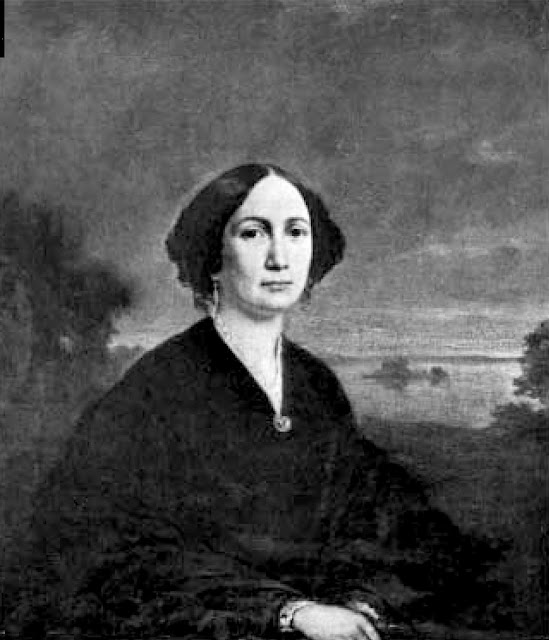 This poem is attributed to Nathaniel Parker Willis, whom Carl Carmer describes as: “Beau Brummell of the Knickerbocker poets, darling of the nation's literary world.”

To America Vespucci:
Blest was thy ancestor with a deathless fame
When to this western world he gave his name;
But far more blessed, methinks, that man would be,
Fair scion! who might give his name to thee.

The United States Democratic Review, Vol.  5, 1939 presented a fawning description of Miss Vespucci and her case before Congress. Repeating her claim to have been wounded in battle and extolling her dedication to the cause of freedom.

In the attempted rising of August, 1832, and in the engagement with the Austrians on the banks of the Rimini, which it will be remembered by our readers that young Louis Bonaparte took part, she conducted herself with great gallantry, and received a severe sabre stroke on the back of her head, from an Austrian dragoon (to whom, however, though nameless, the justice ought to be done to state that he did not know her to be a woman;) and in her fall to the ground, her right arm was broken by the weight of her horse falling upon it. -- US Democratic Review.

But Diplomat Charles Edwards Lester after an 1845 visit to her impoverished family in Florence questioned her integrity and exposed the fraudulence of her story.

The wealthy citizen of New York with whom America co-habitated, in her later years, was George Parish II. These photos of Parish and his mistress, America Vespucci, appeared in a March 10, 1968 article in the Ogdensburg, NY Advance News,. 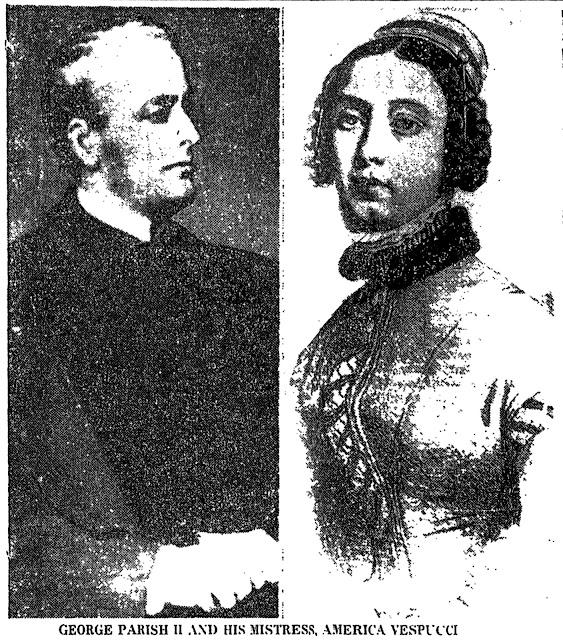 Carl Carmer repeats the legend that America after becoming the mistress of John Van Buren, the president's son,  was lost in a poker-game to George Parish II.

For on a winter journey above Albany into Jefferson County, John Van Buren and Ameriga met George Parish, rich merchant of the north country. In the Brick Hotel at Evans Mills, popular legend goes, John, a little drunk, challenged Mr. Parrish to a game Of poker. When John's gold was gone he put up for a final hand his last possession against all that he had lost—and lost her, too. -- Carmer, 1950 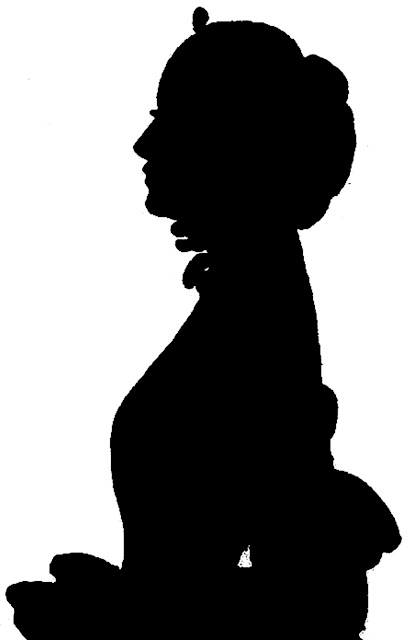 The house they lived in for 18 years is now the Frederic Remington Museum in Ogdensburg. 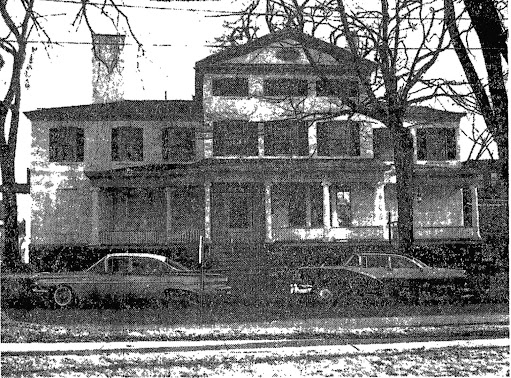