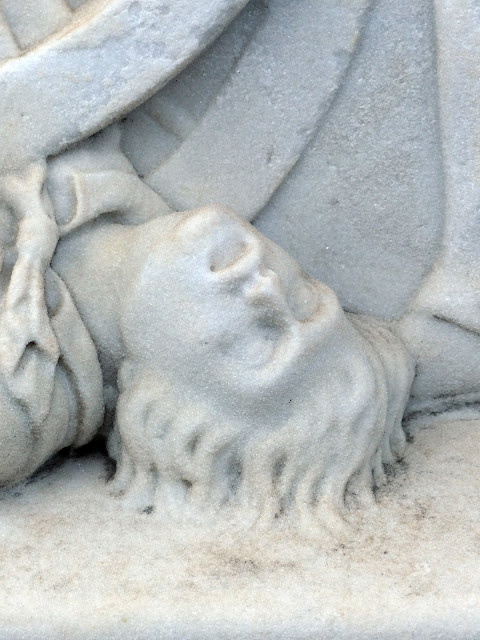 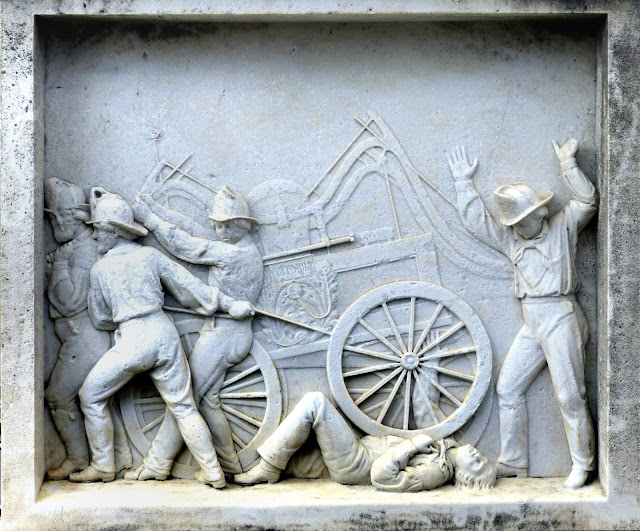 This 1858 high relief depiction of the death of Benjamin Grenup by C. H. Rousseau is part of a monument to Grenup in Glenwood Cemetery in Washington, DC. 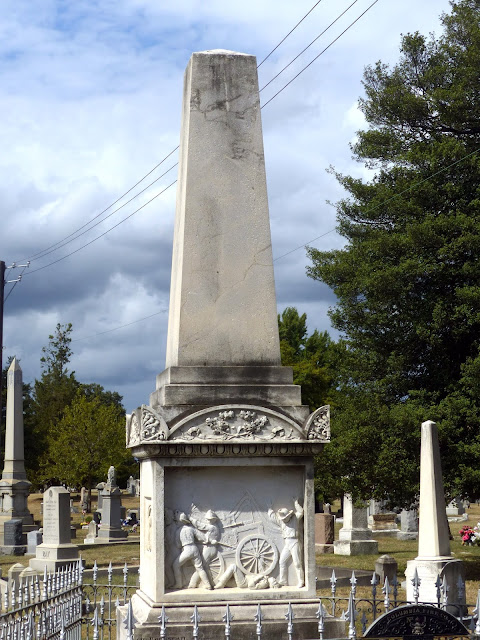 The Smithsonian describes the monument this way.


An obelisk installed on a square base adorned with three reliefs. On the south side of the base is a relief of Grenup at the moment of his death when as a fire fighter he was run over by the water wagon. Four other figures react to the tragedy. One figure throws up his arms while the other three halt the wagon... -- SIRIS 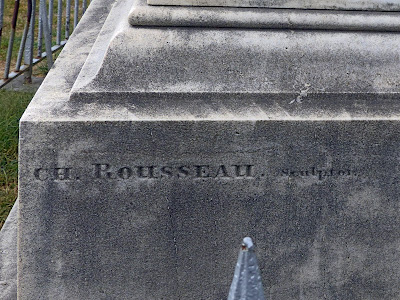 On the west side we find a fire hose coiled with a horn crossing its nozzle. 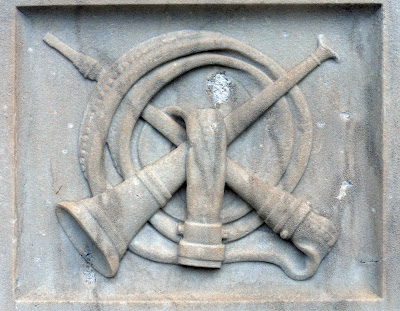 And on the east side, an axe, a torch and a spanner tied with a bowline. 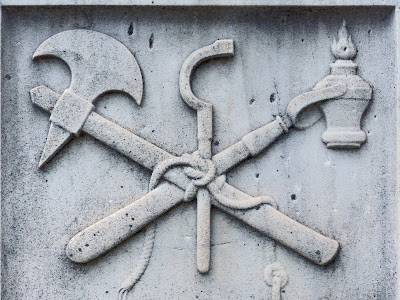 The inscription on the north side tells the story: 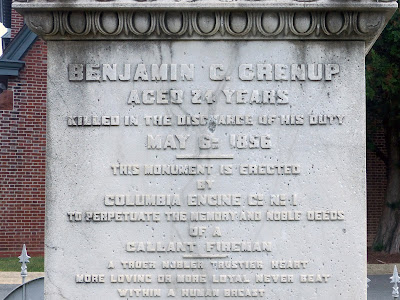 Benjamin C. Grenup
Aged 24 Years
Killed in the Discharge of his Duty
May 6: 1856
This Monument is erected
By
Columbia Engine ㏇ № 1
To perpetuate the memory and noble deeds
Of a
Gallant Fireman
---
A truer nobler trustier heart
More loving or more loyal never beat
Within a human breast

Sarah Stierch at DCist tells it with appropriate dramaticality.


Until 1856, no firefighter had been recorded as dying on duty, despite violent turf wars and major city fires. That year on May 6, this would change, when a fire broke out at Shreeve's Stable on 7th Street NW. Columbia Firehouse #1 sent their volunteers to the scene. Amidst the frenzy, screams erupted from one of the water pumpers. A firefighter had been run over by his own engine company. Things took place so quickly – moments later 24-year-old Benjamin Grenup lay dead, crushed under the wheels of the pumper, a vehicle used to pump gallons of water for use during fires. -- DCist 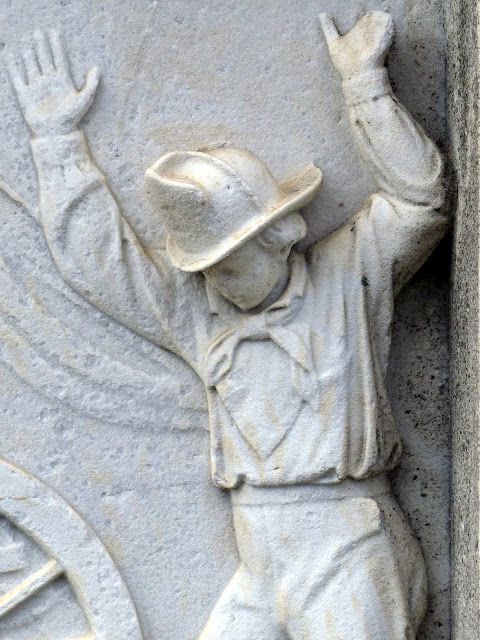 The monument sits in a triangular park near the mortuary chapel surrounded by a fence and marked with red fire hydrants. 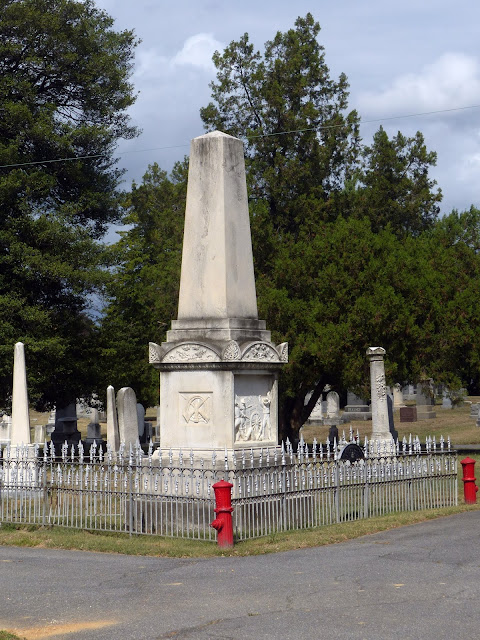 The maker of the fence is identified as J. H. Mead. 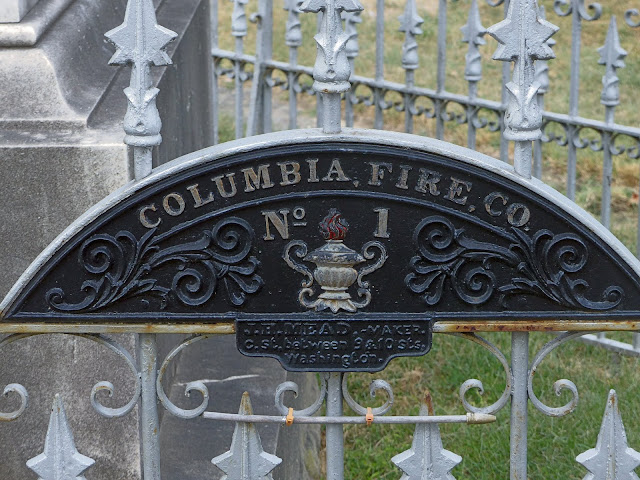 The fire hydrants were patented in 1857: 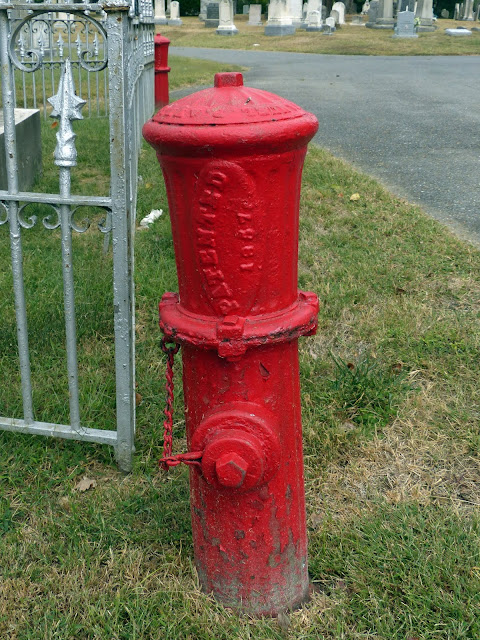 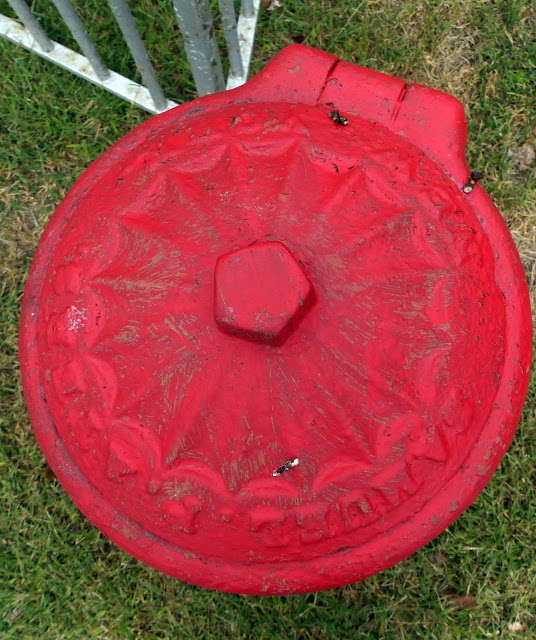 While John Kelly disputes the claim that Grenup's death was the very first on-duty death of a fireman recorded in DC, this monument dramatically highlights the dangers of 19th century fire-fighting. 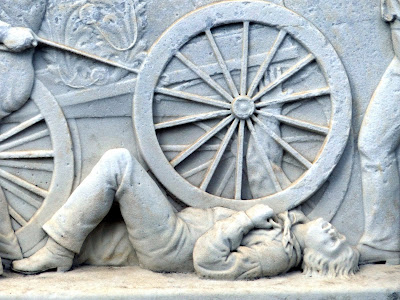