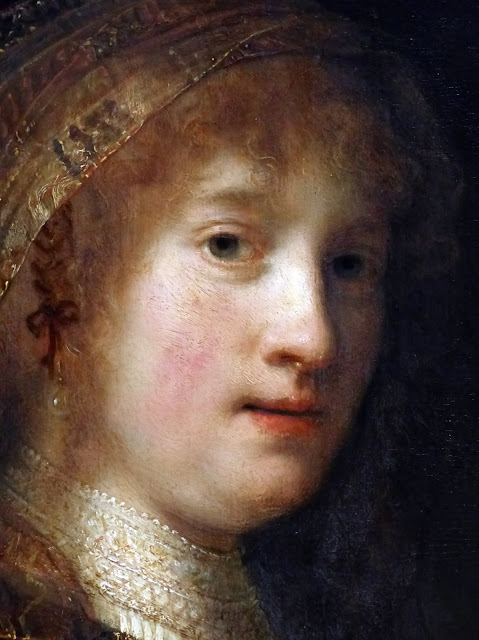 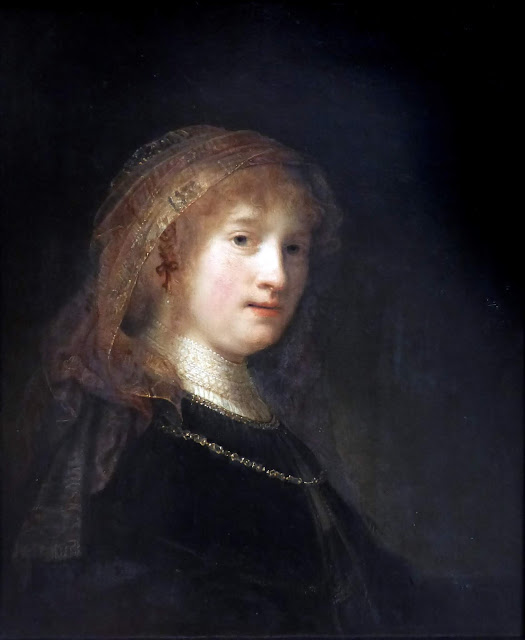 This 1634/1635 portrait of “Saskia van Uylenburgh, the Wife of the Artist” by Rembrandt van Rijn hangs in the National Gallery of Art in Washington, DC.


After learning the fundamentals of drawing and painting in his native Leiden, Rembrandt van Rijn went to Amsterdam in 1624 to study for six months with Pieter Lastman (1583–1633), a famous history painter. Upon completion of his training Rembrandt returned to Leiden. Around 1632 he moved to Amsterdam, quickly establishing himself as the town’s leading artist, specializing in history paintings and portraiture. He received many commissions and attracted a number of students who came to learn his method of painting.

Rembrandt’s wife, Saskia van Uylenburgh, came from a patrician family in Leeuwarden, the capital of the province of Friesland; her father served as the town’s burgomaster. Hendrik van Uylenburgh, Saskia’s cousin, was a painter and flourishing art dealer in Amsterdam. After moving to Amsterdam Rembrandt invested in Van Uylenburgh’s business and came to live in the art dealer’s house. The promising young painter must have met Saskia soon thereafter. They married in 1634, a year after their betrothal, and were together until her death in 1642. The couple had four children, but only Titus, born in 1641, survived infancy.

Rembrandt’s many drawings, etchings, and paintings of Saskia have left us with varied depictions of her personality, including her warmth and tenderness, but also a certain aloofness; her zest for life, but also the debilitating illness that frequently weakened her after the mid-1630s. Rembrandt probably began this painting around 1634–1635, shortly after their marriage. Saskia, wearing a fashionable dress, glances over her right shoulder. -- NGA