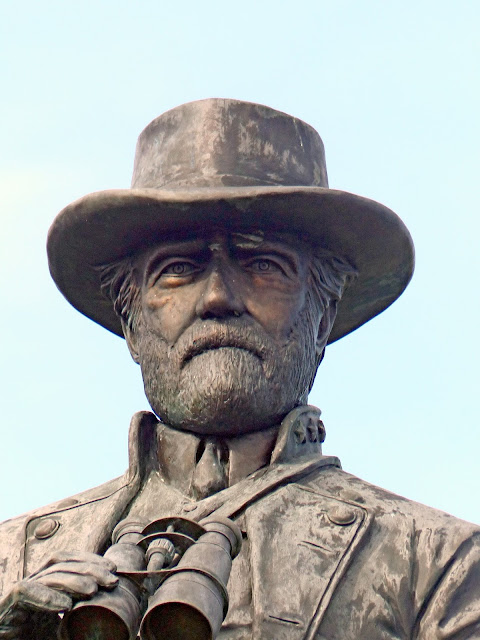 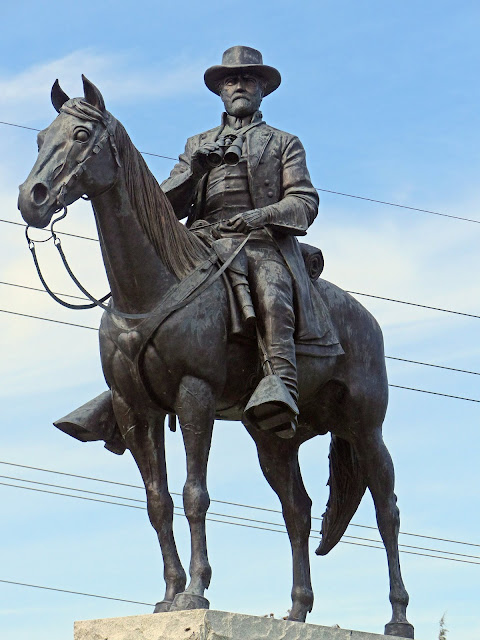 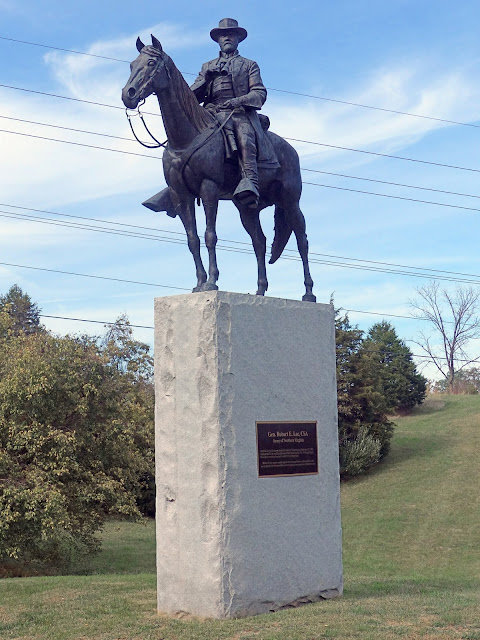 The statue does not mark a Confederate position in the battle of Antietam; it commemorates Confederate troops moving along the Sharpsburg Pike (MD 34) toward the town of Sharpsburg and contains a statement about Lee's devotion to "the universal right of every people to self-determination." 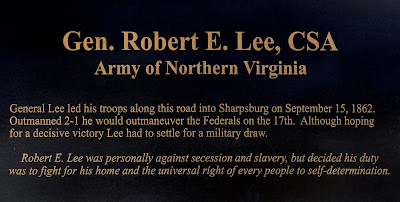 General Lee led his troops along this road into Sharpsburg on September 15, 1862. Outmanned 2-1 he would outmaneuver the Federals on the 17th. Although hoping for a decisive victory Lee had to settle for a military draw.

Robert E Lee was personally against secession and slavery, but decided his duty was to fight for his home and the universal right of every people to self-determination.


The statue was erected in 2003 by William F. Chaney, a wealthy history buff from Anne Arundel County who outbid the park service for the parcel, known as the Newcomer farm, in 1999. A self-proclaimed “unreconstructed rebel” and distant relative of Lee, Chaney also had proposed erecting statues of Confederate generals Stonewall Jackson and J.E.B. Stuart, but he dropped those plans amid local objections. 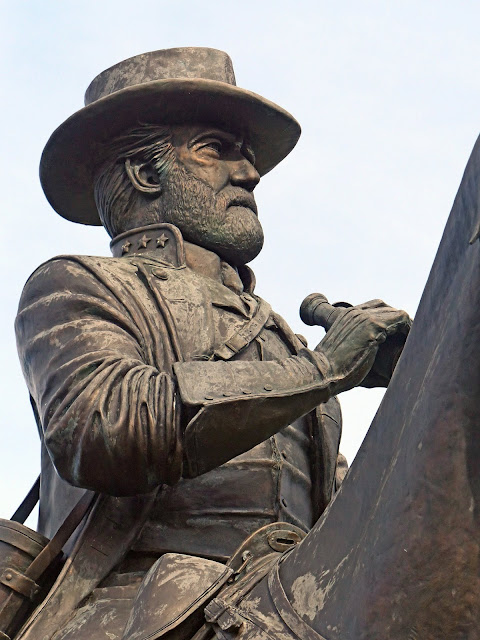 The Park Service acquired the Newcomer Farm in 2005 along with the intentionally provocative  statue. (Cheney held on to the Newcomer House until 2007.)  Almost immediately, rumors began to circulate that the NPS intended to remove or relocate the statue. Park Superintendent John Howard said in 2005, “We've got many more serious issues to address rather than moving a monument,... I've got over $2.5 million worth of work to do on the buildings, and if I've got money to spend, I'm going to use it on that.”  In 2017, $78,333 of president Trump's salary was applied to the renovation of the Newcomer House. 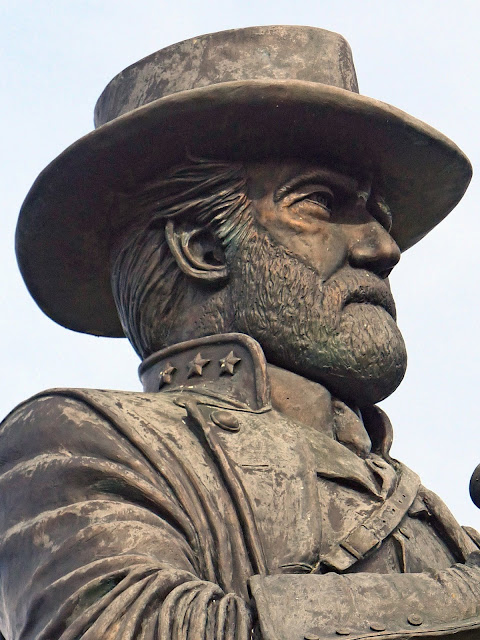 In 2017 U.S. Rep. John Delaney, D-Md called for the removal of the statue. As he told the Herald-Mail:


“I don’t believe that statues and monuments meant to glorify the Confederate cause and Confederate leadership belong on federal land, and they should be taken down unless they serve the clear purpose of educating people about American history and are placed by historians in the proper context for that purpose,”

“For example, we should present accurate information and preserve materials in museums when it achieves that objective,”

“The history of this piece, which now resides on this sacred ground, certainly makes it clear it was recently erected by a private citizen out of pro-Confederacy enthusiasm and not to provide historical context or under the direction of a battlefield historian, and therefore, I don’t think that taxpayer resources should serve that end and it should be taken down,”

The Park Service replied that they had no plans to remove the statue. John Delaney, Anthony Brown and Jamie Raskin co-sponsored the “Robert E. Lee Statue Removal Act” on September 14, 2017. Congressman Delaney did not run for re-election in 2018 and is running for President of the United States in  2020. 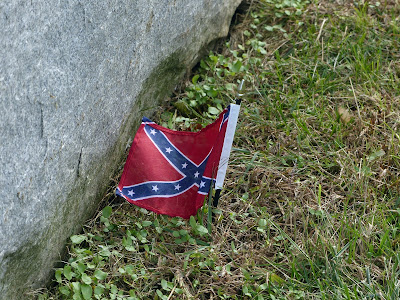 An historical marker placed at the Newcomer House explains the Park Services position on controversial statuary in Battlefield parks.

The current National Park Service policy on monuments states that:

“Unless directed by legislation, it is the policy of the National Park Service that these works and their inscriptions will not be altered, relocated, obscured, or removed even when they are deemed inaccurate or incompatible with prevailing present-day values” 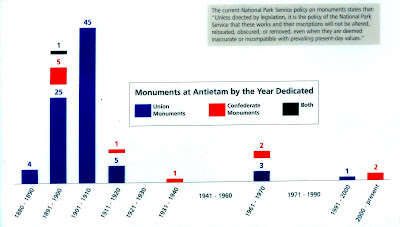 In fact this imbalance was one of the reasons Cheney cited for his commissioning the R.E. Lee monument. "It was time to even the odds a little bit," he told Dishneau. 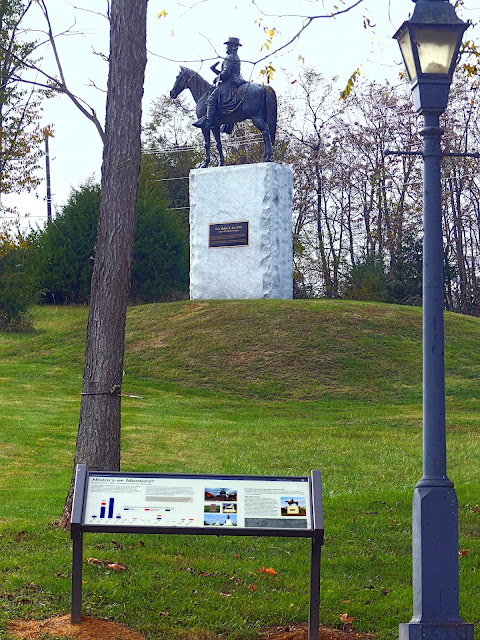 The marker includes three “Questions for Reflection” that are worth considering with regard to this and other Confederate statuary.


• What is the purpose of monuments on a battlefield? Are they memorials to those who fought, or attempts to teach history in a particular way?

• Do monuments reflect what actually happened, or how a person or group interpreted those events and what they chose to set in stone?

• Does the Lee Monument reinforce the myth of the Lost Cause? 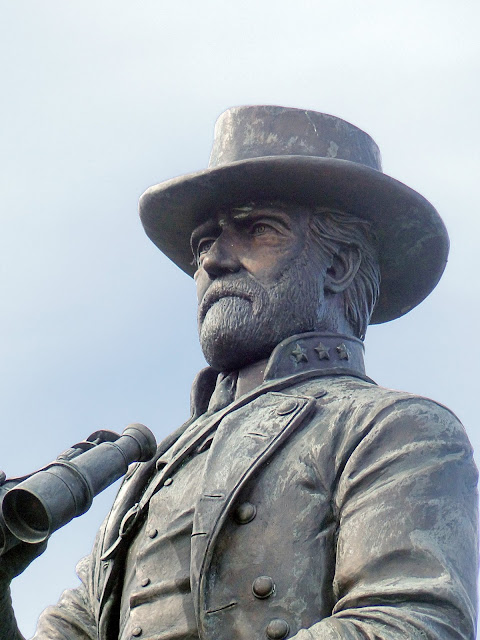