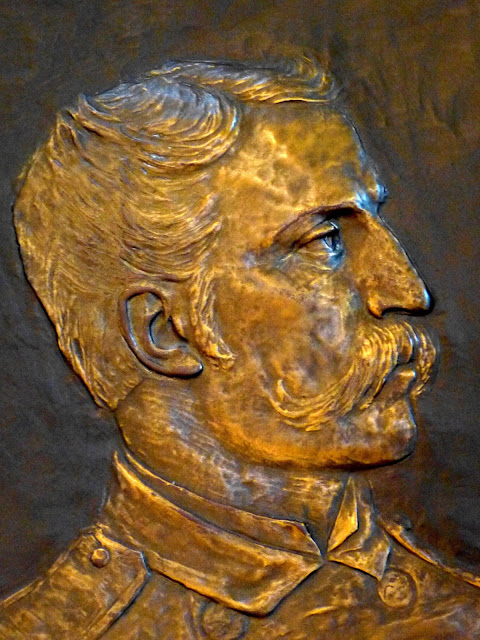 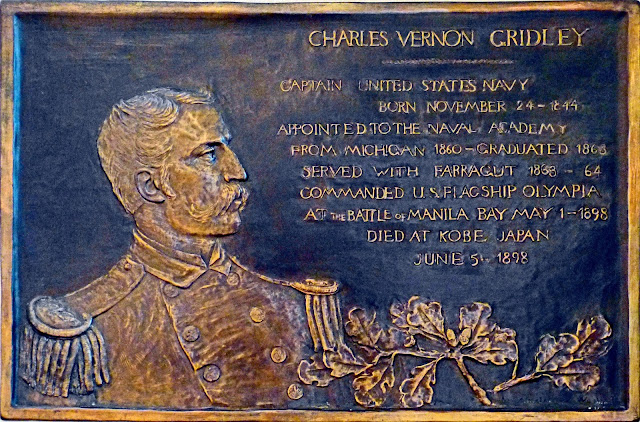 This plaque honoring Charles Vernon Gridley hangs in Bancoft Hall at the US Naval Academy in Annapolis, Maryland.

Gridely is mainly known not for what he did at the Battle of Manila Bay but for what Admiral Dewey said to open the battle.


"You May Fire When You Are Ready Gridley"

When  Charles Gridley took command of the Olympia in 1897 on the verge of the Spanish American War he suffered from pain perhaps due to liver cancer. In 1897 he was pronounced unfit for service. But he persuaded his friend George Dewey to keep him on as commander of the Olympia. Richard Harris describes the situation at the beginning of the Battle of Manila Bay:


"Dewey knew that the strain of the long night had taken a terrible toll on the ailing captain of his flagship. He offered to excuse Gridley from duty and urged him to go below for some much needed sleep. Gridley refused. ‘Thank you, Commodore,’ he said, ‘but [the Olympia] is my ship and I will fight her.’ A mess attendant passed by with a steaming can of coffee. Gridley took a cup, and left for his battle station in the conning tower."

The Battle was a famous victory but


"The searing heat and poor ventilation in the Olympia‘s conning tower, combined with the strain of the battle, had proved too much for Gridley. At some point during the day he struck his side on the edge of the chart table, and when the battle was over Gridley had to be carried from his post. He never rose from his sickbed, and Benjamin Lamberton replaced him as captain of the Olympia."

Gridley died on the way home aboard the passenger liner Coptic in Kobe Harbor. His ashes were returned to US and buried at Lakeside Cemetery in Erie Pennsylvania.