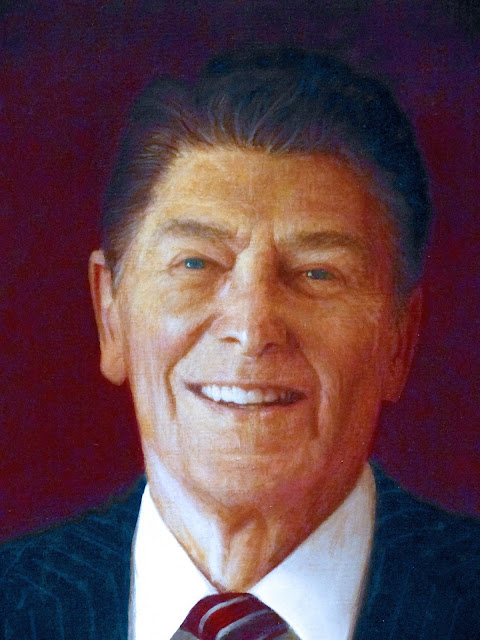 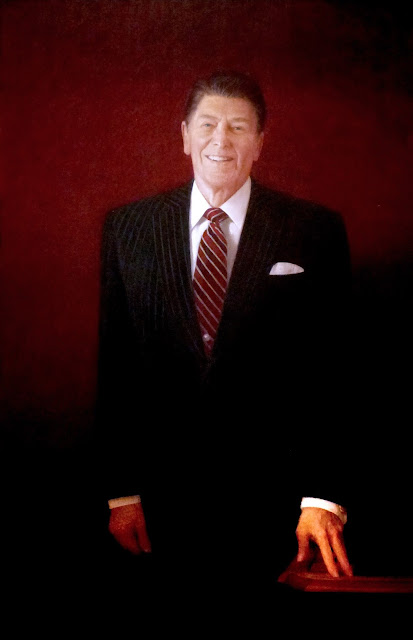 This 1989 portrait of Ronald Reagan (1911-2004) by Henry Casselli, Jr. hangs in the National Portrait Gallery in Washington, DC.


"When ex-California governor Ronald Reagan began his presidency in 1981, his warmth and skill in handling the media had already planted the seeds of his reputation as the 'great communicator.' More significant, however, was how those traits were made to work on behalf of his conservative agenda. By the end of his second term, despite widespread concern over budget deficits and several administration scandals, Reagan's presidency had wrought many significant changes. Under his leadership, the nation had undergone major tax reforms, witnessed a significant easing of relations with the Communist world, and experienced a sharp upturn in prosperity. Reagan left office enjoying a popularity that only a few of his outgoing predecessors had ever experienced.

This portrait is based on some thirty studies that artist Henry Casselli made of Reagan over four days at the White House in late 1988. Commissioned with the National Portrait Gallery in mind, the finished picture arrived at the White House the following January for presidential inspection. When Reagan saw it he exclaimed, 'Yep! That's the old buckaroo.'" -- National Portrait Gallery