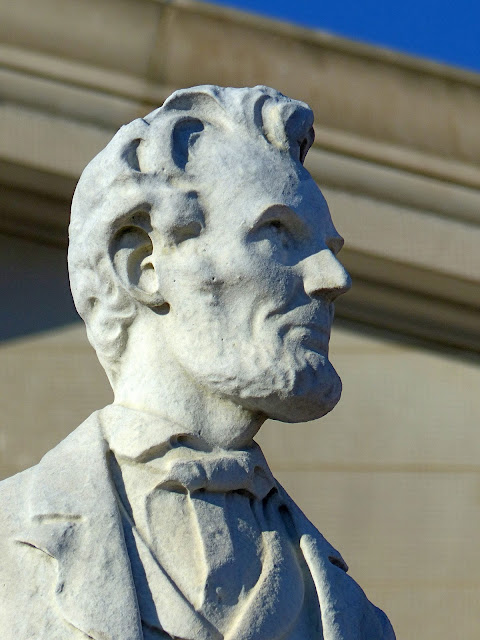 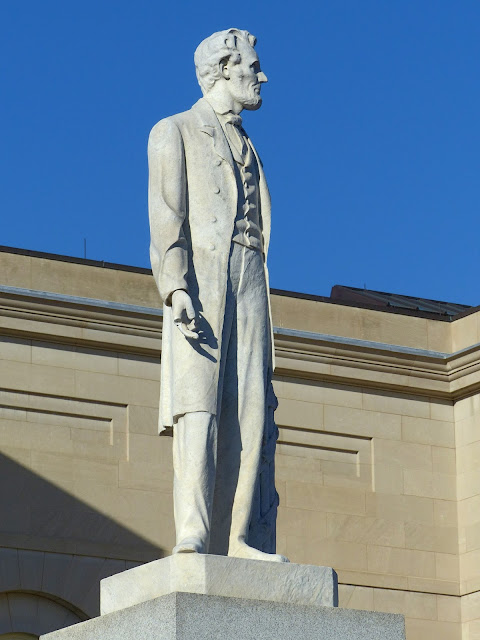 
"Frequently identified as the first memorial erected to the assassinated President, the marble statue by Irish-American sculptor Lot Flannery is indeed the oldest memorial still standing, but not the first. Unveiled on April 15, 1868, the heroic marble statue by Flannery was, in fact, the second. The honor of the first memorial to Lincoln belongs to the city of San Francisco, where a life-size plaster statue of Lincoln was unveiled on April 14, 1866, just one year (less one day) after Lincoln's death. A metal replica of the San Francisco statue, substituted in 1889 for the badly eroded original, was destroyed by the great fire of 1906, leaving the Washington statue with the honor of being the country's oldest." -- Steers & Chaconas, 1984 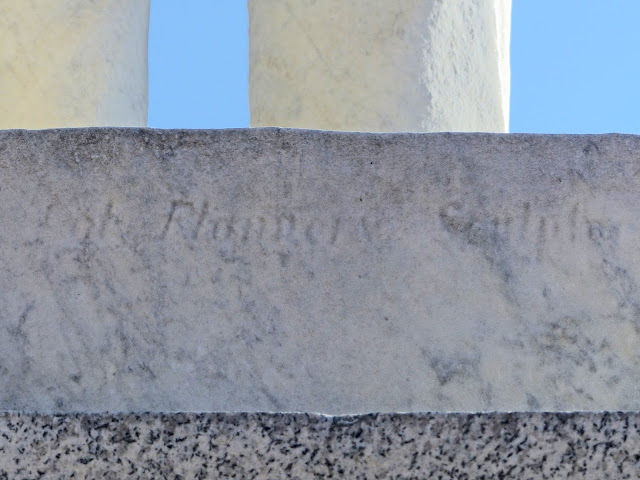 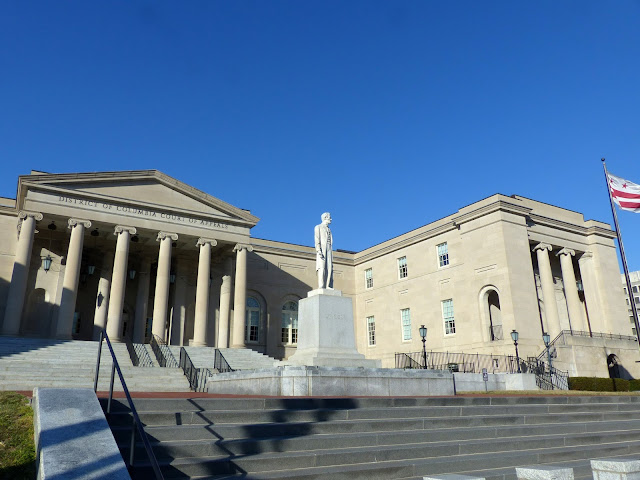 When it was installed in 1868 it was on top of a 30 foot tall pillar. This photo from the DC Public Library shows the statue and pillar in front of what was then the DC City Hall. 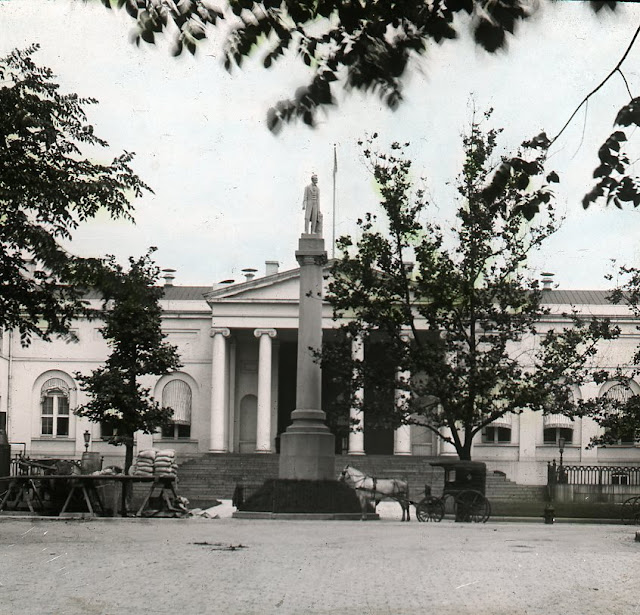 Local Washingtonians complained that Lincoln was barely visible looking down on them from such a height. When the City Hall underwent renovation in 1919 the monument was removed, taken apart and put in storage. Some suggested that the naive statue of Lincoln should be installed somewhere else, perhaps Fort Stevens. By the time a movement arose to have the statue re-placed at the Courthouse it had been lost.


"When the time came to put the statue back, however, it could not be found in the Old City Hall where it was supposed to have been safely stored - it was missing! What John Wilkes Booth and his band of conspirators could not do, unknown persons apparently had - the successful abduction of Abraham Lincoln.

Thanks to the anger and persistence of an old friend of Lot Flannery and Abraham Lincoln, the statue was finally located and returned. Freeman Thorp, a portrait artist of some note, searched for the missing statue and found it lying partially crated on the mud flats near the Potomac River, behind the Bureau of Printing and Engraving. After a thorough cleaning, the statue was placed on its present pedestal and ceremoniously rededicated on April 15, 1923, peaceful at last - or so we hope!" -- Steers & Chaconas, 1984 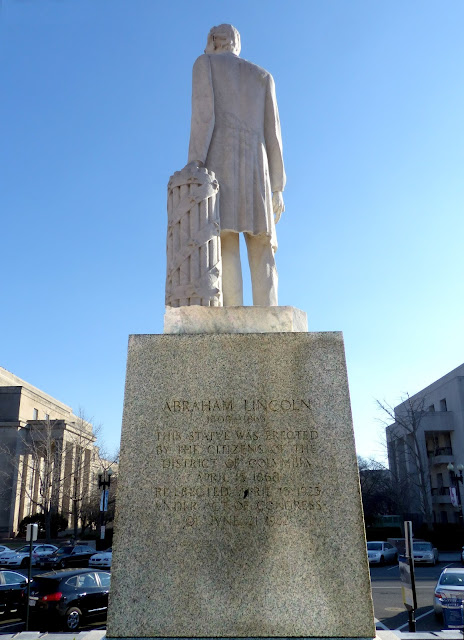 The monument did not rest in peace. Liisa Rajala in Roll Call, April 23, 2009 continues the story.


"In 2006, the oldest Lincoln statue in the District was removed in preparation for the expansion and renovation of the courthouse in Judiciary Square. With construction finished and the statue newly restored, it was rededicated last week, 141 years after the original dedication and in the bicentennial year of Lincoln’s birth."

On the back (north) side of the monument we find this plaque.

Re-erected on April 15, 2009
In Honor of the Bicentennial year of the birth of Abraham Lincoln
And in Celebration of the Renovation of the Historic Courthouse 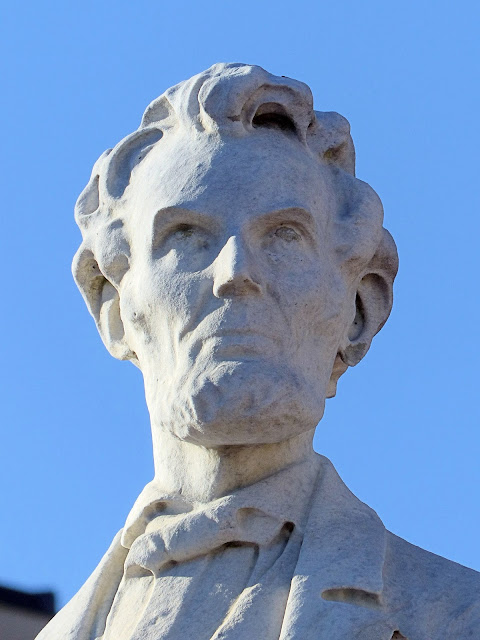 Lowering the statue in 1923 left it subject to vandalism and the fingers of the right hand were often broken off. The right hand was eventually re-carved but the new hand was too large. 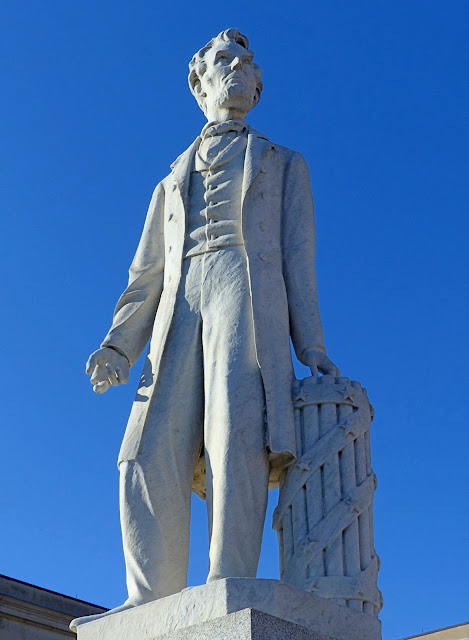 Today the out-sized hand has been broken again; the pointer finger has broken off. 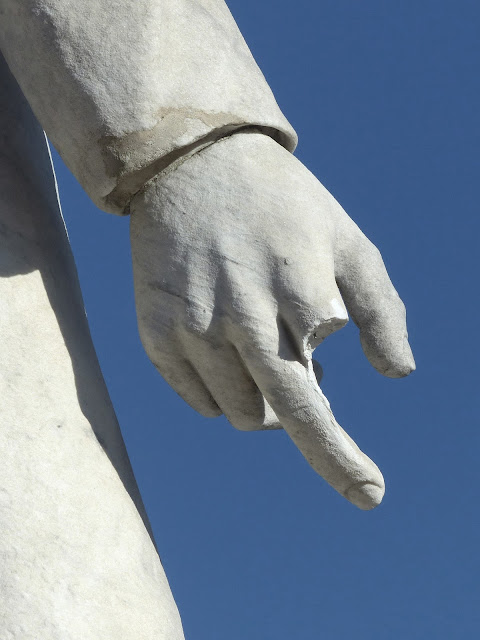 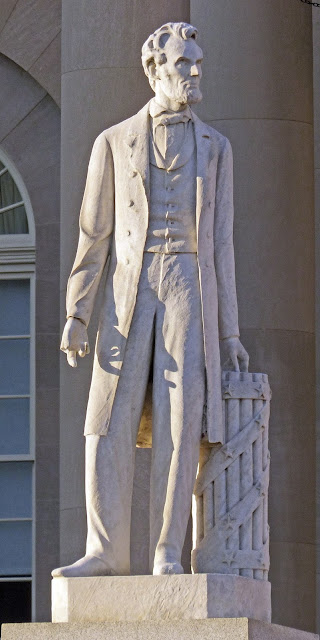 For an earlier look at this monument see: Landmarks: Lot Flannery's Lincoln.
Read Steers & Chaconas, 1984 treatment of this statue, here.
Posted by Allen Browne at 2:31 PM