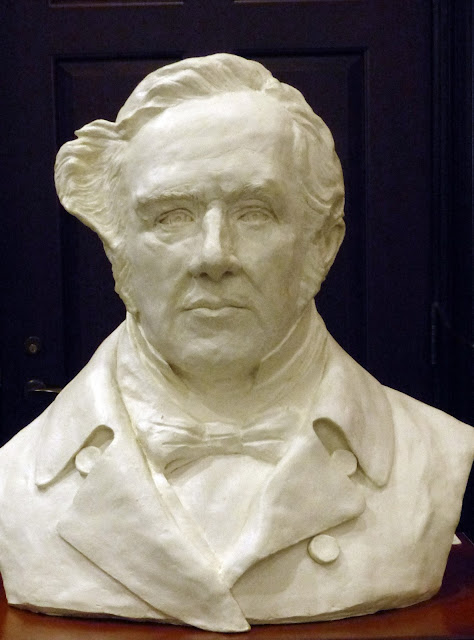 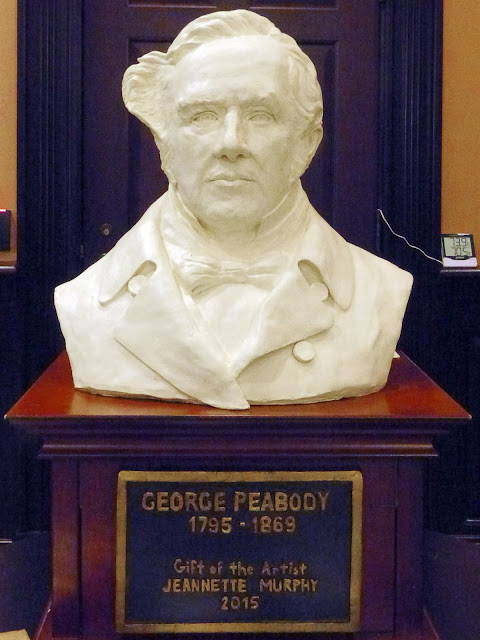 This 2015 bust of George Peabody by Jeannette Murphy was made specifically for and given to the Peabody room of the Georgetown Neighborhood Library in Washington, DC by the artist.


"George Peabody, famed 19th century merchant, financier and philanthropist, was only seventeen years old when be arrived in Georgetown, DC in May of 1812 on the brig Fame with his uncle John Peabody. Together they opened a dry goods store on Bridge Street, today's M Street. Within weeks of the store's opening, the United States was at war with England and young George enlisted as a volunteer in an artillery regiment. Despite marching, drilling, and standing duty, he saw no combat service during the War of 1812.

As the financial brains of the business, George eventually partnered with Elisha Riggs in 1815 and together they bought and sold consignments of mercantile goods from Europe through American merchants in the North. Within one year the firm of Riggs and Peabody moved the headquarters of their growing concern to more centrally located Baltimore, MD. Realizing it would be more profitable to personally negotiate with European sellers, Peabody moved to London in 1837 where he lived the remainder of his life working as a merchant and exchange broker. His venture eventually became J. P. Morgan and Company.

Peabody amassed a fortune on both sides of the Atlantic. Believing that the only way to elevate oneself was through education he decided to bequeath his money to the establishment of educational institutions in places where he had lived or were especially meaningful.

In 1867 Peabody gave the sum of $15,000 (today worth a quarter of a million dollars) in trust as a fund for the establishment of a library to 'benefit the citizens of Georgetown in the District of Columbia.' The trustees of his estate first invested the money and after realizing a profit they established the Peabody Library Association. This collection of books was first housed on the ground floor of the Curtis School, opened on March 1, 1876 and located on 0 Street across from St. John's Church. The school was razed in 1951.

The library association moved to its present location in the Georgetown Neighborhood Branch Library when that building was completed in 1935. Before this move, the Peabody Library was operated as a subscription library, which required a paid membership in order to borrow materials. After its move, the collection became known as the Peabody Room. Modeled after the Washingtoniana Division of the Martin Luther King, Jr. Memorial Library, it became a noncirculating reference and research collection of local history. In 1979, the Peabody Trustees turned the collection over to the DC Public Library, with the proviso that it remain both intact and in Georgetown.

Jerry McCoy (below) Special Collections Librarian wanted a bust of Peabody for the Peabody Room. "I just thought having a portrait bust for the Peabody Room would just add classy on top of classy that was already embodied by the new Peabody Room when we reopened in 2010. It’s just an amazing collection." he told the Georgetown Current, May 20, 2015. A mutual acquaintance suggested Jeannette Murphy who created the bust and gave it to the Peabody Room. 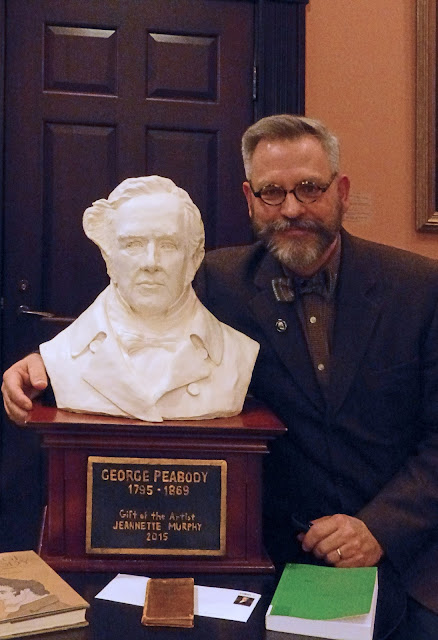 The distinctive projection of Peabody's hair may have been modeled on this c 1850 photo by Southworth & Hawes (The Metropolitan Museum of Art) [Public domain], via Wikimedia Commons. 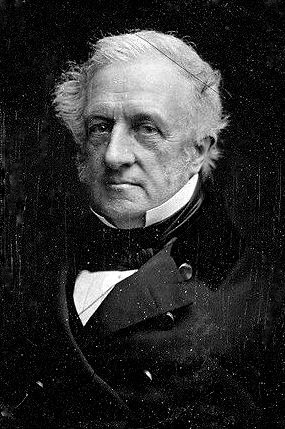 The same projection occurs on the other side in this 19th century painting that also appears in the Peabody Room. 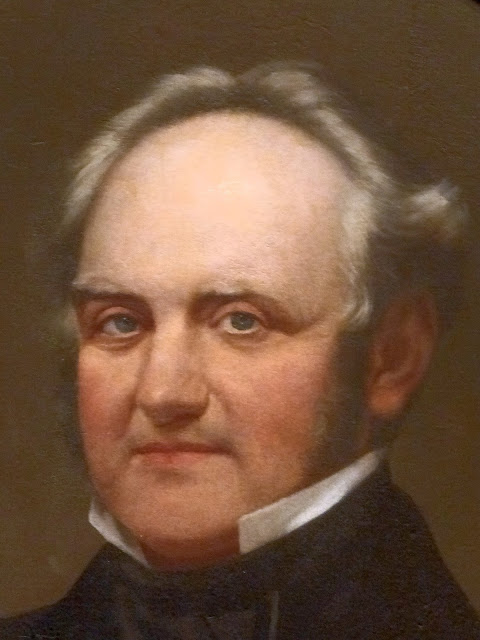 This image of Peabody from Elbert Hubbard's Little Journeys to the Homes of  Great Business Men, (Vol. 25, No. 3., September MCMIX, Roycrofters.) shows Peabody with a more flowing coif. 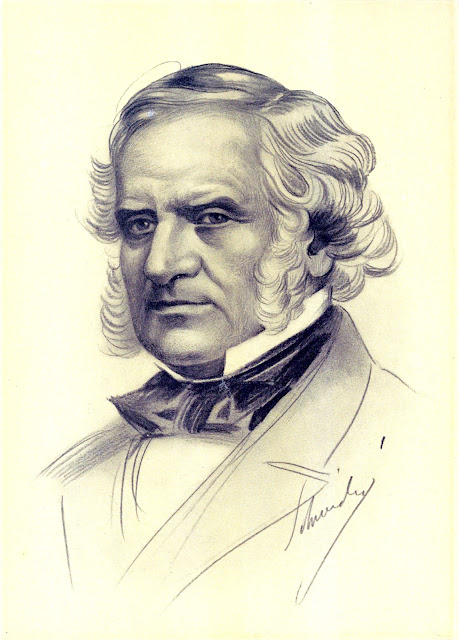