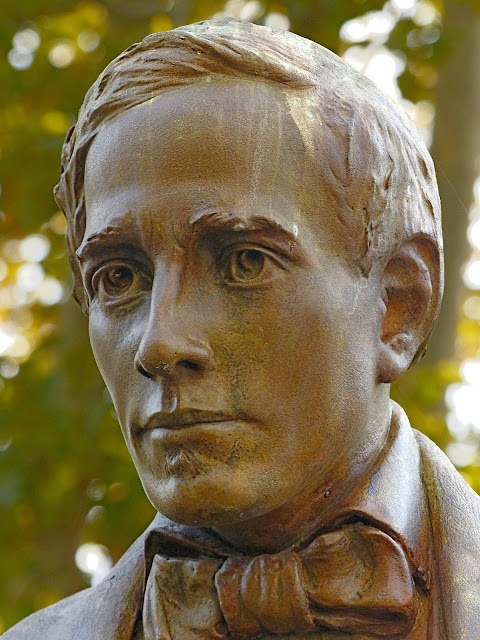 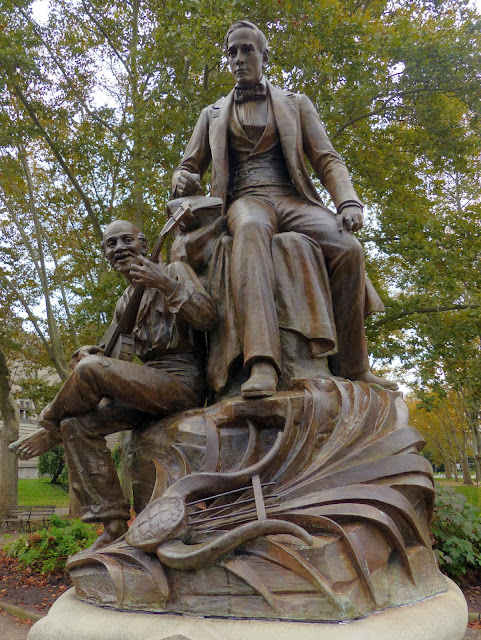 This Statue of Stephen Foster by Giuseppe Moretti stands in Schenley Plaza on Forbes Avenue in Pittsburgh, Pennsylvania.


"Stephen Collins Foster (July 4, 1826 – January 13, 1864), known as 'the father of American music', was an American songwriter primarily known for his parlor and minstrel music. Foster wrote over 200 songs; among his best-known are 'Oh! Susanna', 'Hard Times Come Again No More' , 'Camptown Races', 'Old Folks at Home' ('Swanee River'), 'My Old Kentucky Home', 'Jeanie with the Light Brown Hair', 'Old Black Joe', and 'Beautiful Dreamer'. Many of his compositions remain popular more than 150 years after he wrote them. His compositions are thought to be autobiographical. He has been identified as 'the most famous songwriter of the nineteenth century' and may be the most recognizable American composer in other countries. His compositions are sometimes referred to as 'childhood songs' because they have been included in the music curriculum of early education. Most of his handwritten music manuscripts are lost, but copies printed by publishers of his day can be found in various collections." -- Wikipedia 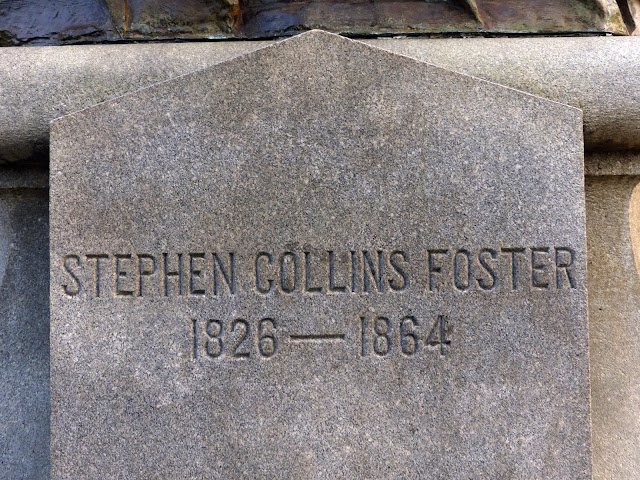 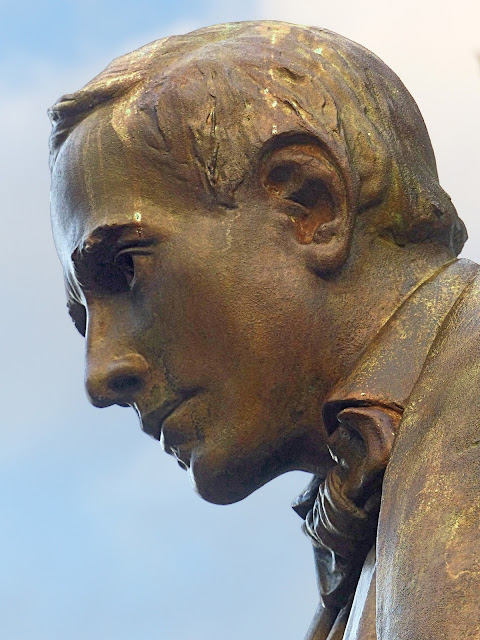 Moretti's Statue was originally installed  in Highland Park and has been subject to vandalism and controversy throughout its existence.

"Stephen Foster is a landmark public sculpture in bronze by Giuseppe Moretti on Schenley Plaza in the Oakland section of Pittsburgh, Pennsylvania. Sited along Forbes Avenue near the entrance of Carnegie Museum of Natural History, in the shadow of Dippy, a life-size sculpture of a Diplodocus dinosaur, and in close proximity to the University of Pittsburgh's Stephen Foster Memorial, the Foster statue is one of the city's best known and most controversial.

The work of art is composed of two figures: a seated Stephen Collins Foster, the famous Pittsburgh-born songwriter with a notebook in hand, catching inspiration from a Negro slave at his feet strumming a banjo. The sculpture's pedestal is four feet, three inches, and the figures measure ten feet.

Stephen Foster was first erected in 1900 in the city's Highland Park, where Moretti had recently completed grand neoclassical gates for the park's main entrance. An economic depression in the 1890s, however, caused the Pittsburgh Press to head a subscription drive to garner funds for the piece. Nearly 50,000 Pittsburghers lined the parade route for the statue's dedication. Victor Herbert, the Pittsburgh Symphony Orchestra's new music director, led 3,000 school children in the singing of Foster tunes. At the ceremony Stephen Foster's daughter Marion Foster Welch unveiled the statue and nieces of U.S. President James Buchanan laid a wreath at its base.

The actual design of the statue was by committee. Andrew W. Mellon the banker, Edward Manning Bigelow the parks director, Robert Pitcairn the Pennsylvania Railroad mogul, as well as the director of the Carnegie Museum of Art, among others, all met to brainstorm scenarios for the artwork. The current design was suggested by committee member T.J. Keenan, Jr., editor of the Pittsburgh Press, and embraced by Moretti, according to the paper. It is intended to commemorate the song "Uncle Ned," and shows Ned, a slave, with Foster. Stephen Foster's brother Morrison Foster sat as a model in Moretti's New York studio.

Decades later during the Great Depression the sculpture was repeatedly vandalized; the banjo and Foster's pencil were broken off and sold, presumably, as scrap metal. Eventually Pittsburgh mayor Cornelius D. Scully requested the statue be moved to a more visible, safer place. During World War II it was moved to Oakland's Schenley Plaza, along busy Forbes Avenue and across the street from Stephen Foster Memorial. It was rededicated on June 29, 1944." -- Wikipedia

The memorial is still subject to vandalism. Foster's pen is missing. His empty hand hovers over the manuscript of "Uncle Ned" a reference that creates continuing controversy around this memorial. 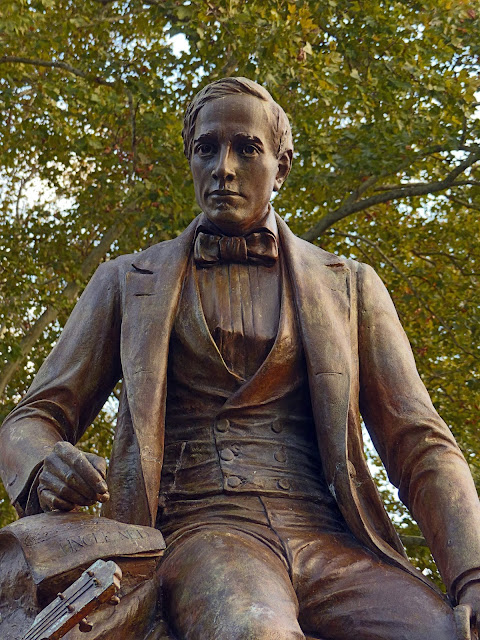 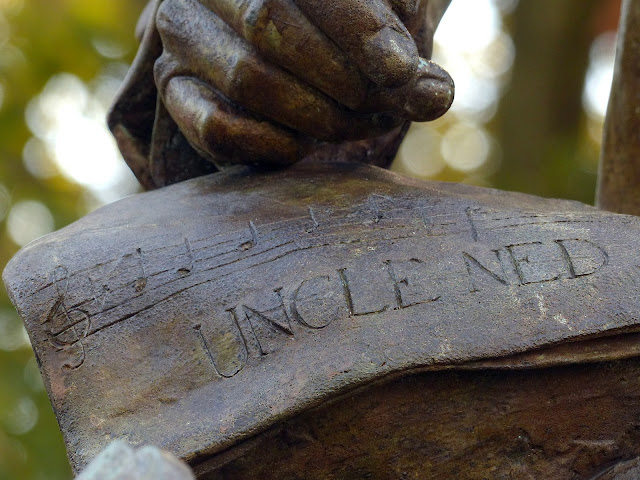