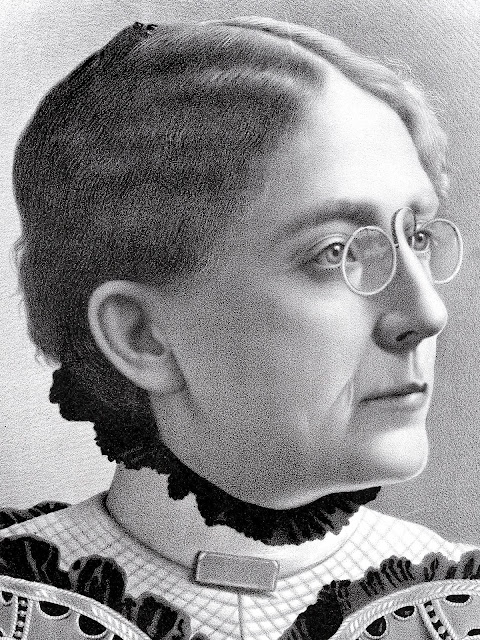 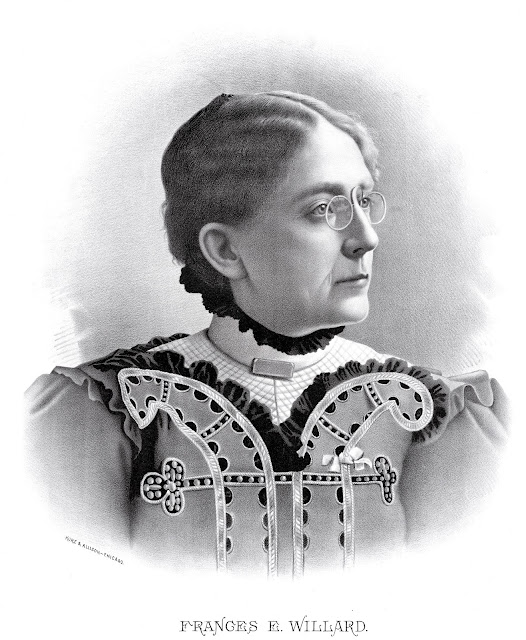 Library of Congress
This c. 1897 lithograph of Frances Elizabeth Caroline Willard by Kurz & Allison appeared in the Votes For Women exhibit at the National Portrait Gallery.
Frances Willard 1839-1898

Disenfranchised and without the legal rights to manage property or wealth, women in the Nineteenth century had little recourse when their families were threatened by alcohol abuse. To address alcohol’s destructive power, Frances Willard helped found the Women's Christian Temperance Union (WCTU) in 1874. Grounded in Christianity, it became one of the largest women's religious organizations in the nineteenth century.
The WCTU enacted reform through prayer and appealed to “women’s morality.” It attracted thousands of followers across the United States, including women of color. For example, by 1866, the African American author Frances Ellen Harper had held several leadership positions in the WCTU. With a national membership of at least 150,000 women, the WCTU offered the suffrage movement a huge network and valuable resources.

In 1881, Willard formally endorsed the suffrage cause, bolstering energy for suffragists. -- NPG

In this 1893 poster commissioned for the Chicago Columbian Exposition by Henrietta Briggs-Wall, Miss Willard's formidable visage is contrasted with those of (clockwise) an idiot, a convict, a madman and an Indian, to show that women, however respectable, were classed with the outcasts of society when it came to voting. (LOC photo) 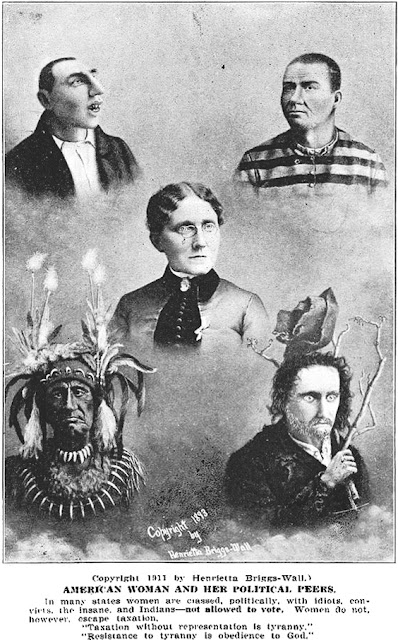 American Woman and Her Political Peers.

In many states women are classed, politically, with idiots, convicts, the insane, and Indians -- not allowed to vote. Women do not however escape taxation.
“Taxation without representation is tyranny.”
“Resistance to tyranny is obedience to God.”

The photo below presents a somewhat softer view of Frances Willard. It belongs to the May Wright Sewall Collection at the Library of Congress. 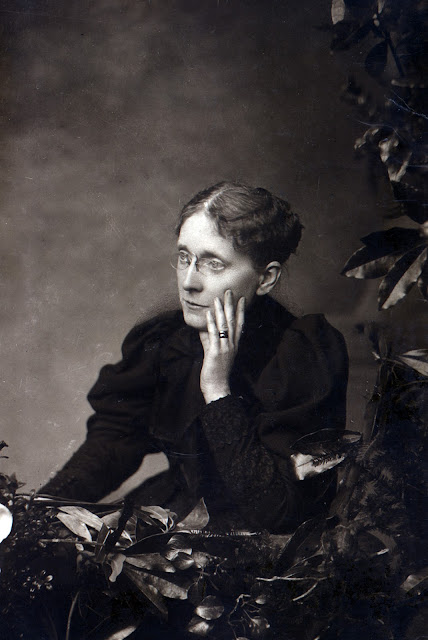 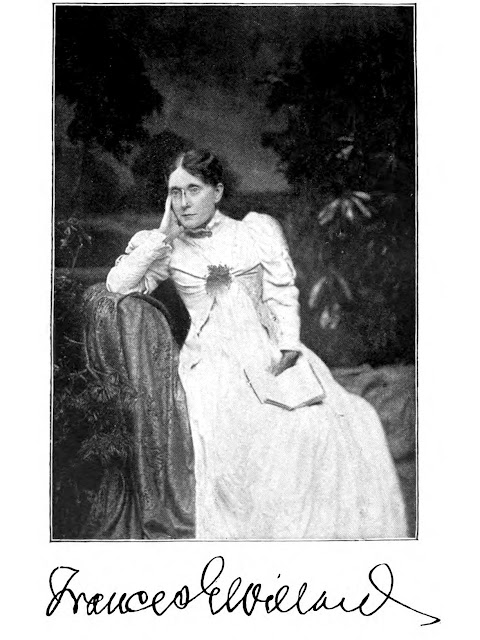 frontispiece, Wheel within a Wheel, by Frances E. Willard.

At age 53, Frances Willard took up bicycling, a sport closely associated with the liberation of women. Photos like the one below appeared in her  1895 book, Wheel within a Wheel.  (see the story told in pictures, here.) 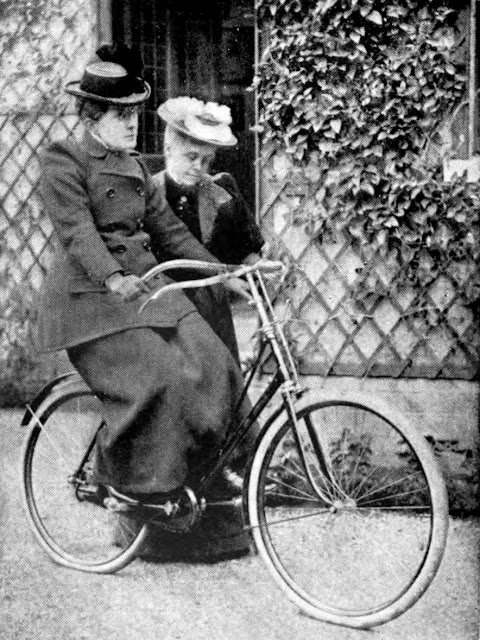 By this time she was already in poor health, suffering from pernicious anemia. She died on February 17, 1898. The St. Paul Minnesota Backbone eulogized her as on the Heroic Dead. Her headstone in Rosehill Cemetery in Chicago is shared with her mother. 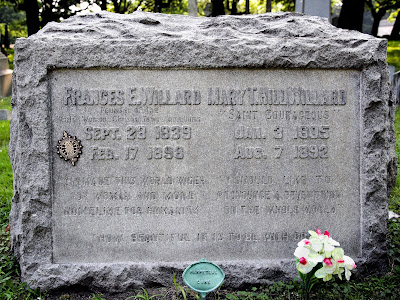 Added to Find-a-Grave by Nancy Schultz
Francis Willard's Epitaph is on the right (marked with the DAR logo).
Frances E.  Willard
Founder of the Worlds Womens Christian Temperance Union
Sept. 28 1839
Reb. 17 1898
She made this world wider for women and more homelike for humanity
Her mother's to to the left.
Mary T. Hill Willard
“Saint Courageous”
Jan. 3 1805
Aug. 7 1892
I Should Like to Pronounce a Benediction of the Whole World
They are both finalized with:
How Beautiful It Is To Be With God
said to have been Frances Willard's last words.
The state of Illinois honored Frances Willard with a statue in Statuary Hall in the U.S. Capitol in 1905. 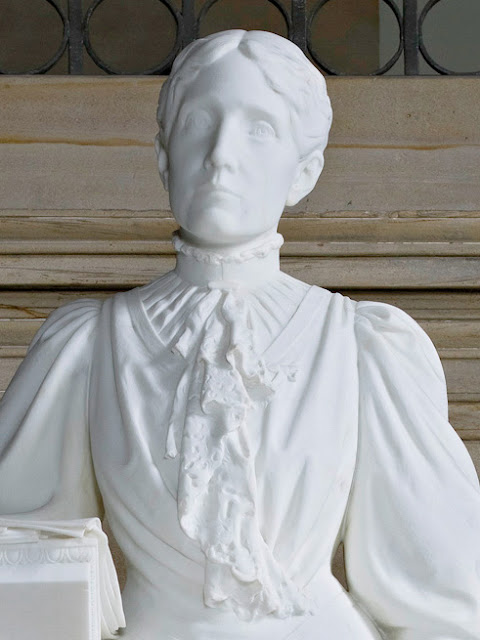 This statue by Helen Farnsworth Mears was the first statue of a woman to appear in Statuary Hall. (Photos by the Architect of the Capitol) 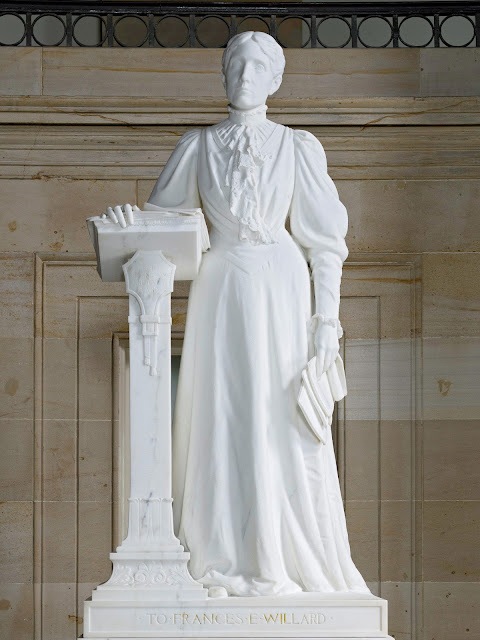 To Frances E. Willard
Statue by Helen Farnsworth Mears
1905
The inscription on the podium reads: “For God and Home in Every Land”. This was the internationalized version of Miss Willards slogan “For God and Home and Native Land.” 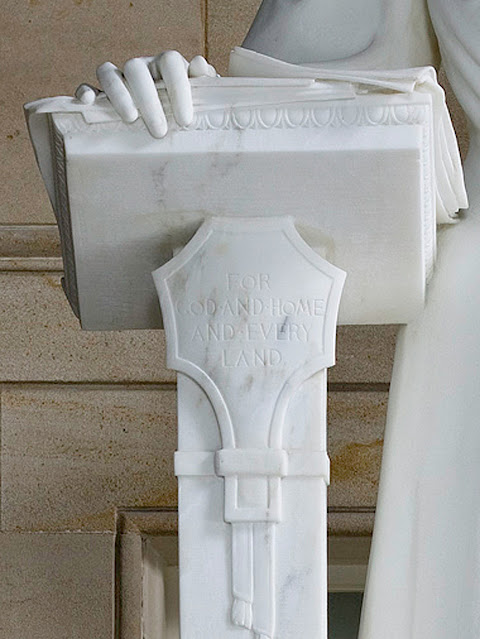 The main inscription is a segment from a speech entitled Temperance and Home Protection given to the Women’s Christian Temperance Union in Newark New Jersey in 1876. 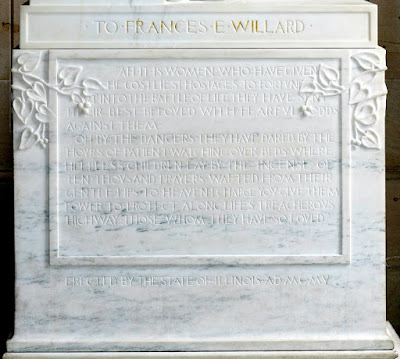 “Ah! It is women who have given the costliest hostages to fortune, when to the battle of life they have sent their best beloved with fearful odds against them. Oh, by the dangers they have dared, by the hours of patient watching over beds where helpless children lay, by the incense of ten thousand prayers wafted from their gentle lips to heaven — I charge you give them power to protect, along life's treacherous highway, those whom they have so loved.”

Erected by the State of Illinois AD MCMV 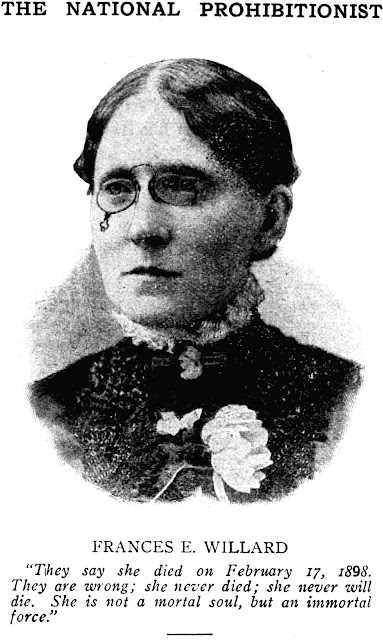