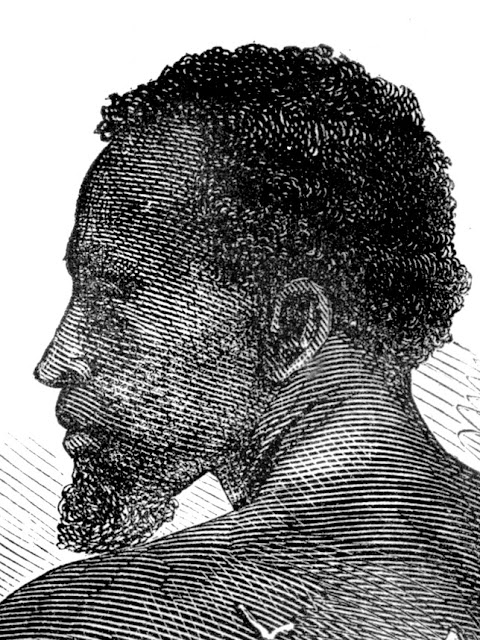 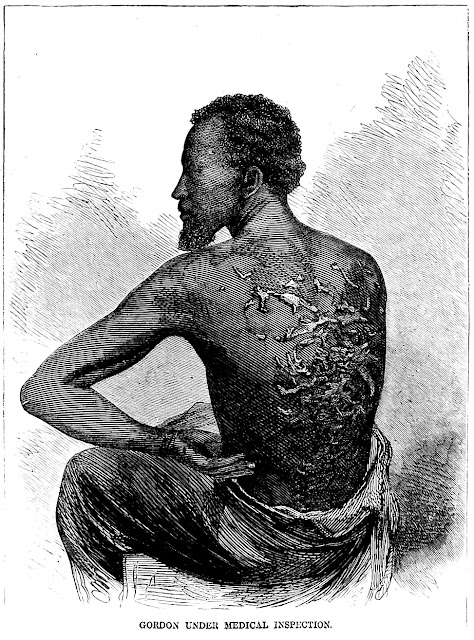 Harper's Weekly identifies this man as "Gordon" in an article entitled "A Typical Negro" that appeared on July 4, 1863.  This main picture is flanked by two others. All three are attributed to M'Pherson and Oliver and said to have been taken in Baton Rouge in March of 1863.

WE publish herewith three portraits, from photographs by M'Pherson and Oliver, of the negro GORDON, who escaped from his master in Mississippi, and came into our lines at Baton Rouge in March last. One of these portraits represents the man as he entered our lines, with clothes torn and covered with mud and dirt from his long race through the swamps and bayous, chased as he had been for days and nights by his master with several neighbors and a pack of blood-hounds; another shows him as he underwent the surgical examination previous to being mustered into the service --his back furrowed and scarred with the traces of a whipping administered on Christmas-day last; and the third represents him in United States uniform, bearing the musket and prepared for duty. -- Harper's Weekly 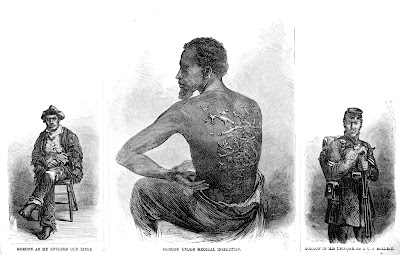 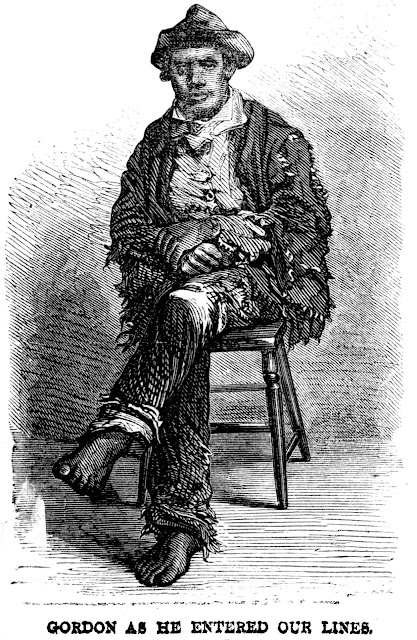 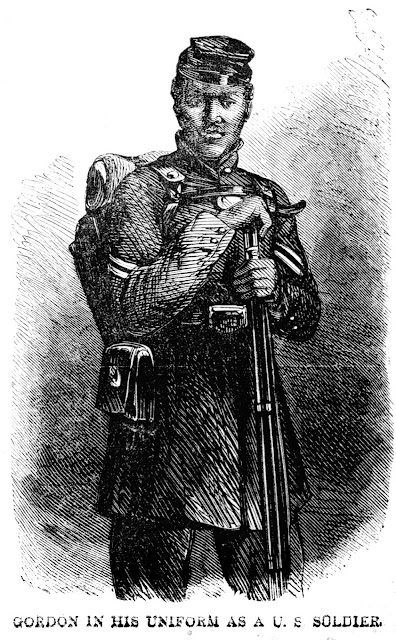 Together, these three wood engravings tell a highly effective, though perhaps somewhat fictionalized, story of the transformation of an enslaved scourged African American Mississippian into a Free Union Soldier. Harper's includes a description of Gordon's cleverness during his harrowing escape and his heroism in U.S. service.

This negro displayed unusual intelligence and in order to foil the scent of the blood-hounds who were chasing him he took from his plantation onions, which he carried in his pockets. After crossing each creek or swamp he rubbed his body freely with these onions, and thus, no doubt, frequently threw the dogs off the scent.
At one time in Louisiana he served our troops as guide, and on one expedition was unfortunately taken prisoner by the rebels, who, infuriated beyond measure, tied him up and beat him, leaving him for dead. He came to life, however, and once more made his escape to our lines.  -- Harper's Weekly

Two of the photographs on which Harper's wood engravings are based still exist.  The main picture is a version of an extremely famous photo distributed during the Civil War in the form of cartes de visite. This CdV is an 1864 copy by C. Seaver, Jr., after the 1863 McPherson & Oliver original. 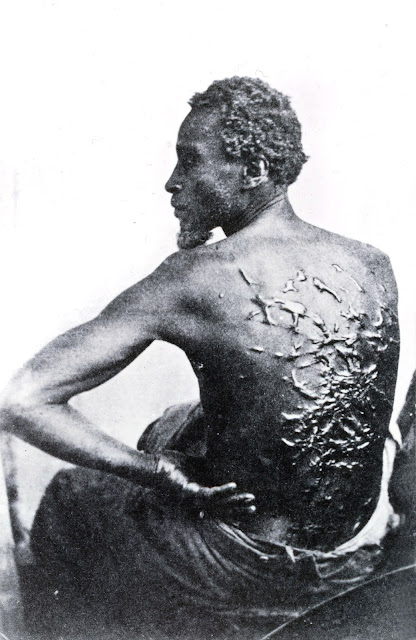 NYPL
This picture was very influential during the war and remains an important and familiar documentary photo.
A photo of “Gordon as He Came to Our Lines”  also existed as a carte de visite. (This one sold for  $1,527.50 at Cowan's Auctions in 2008.) 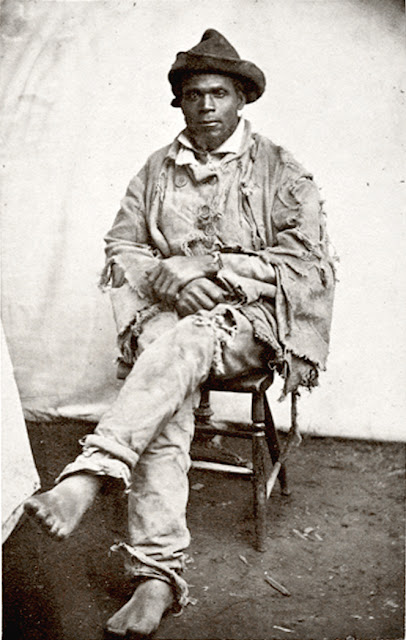 Alas, there're no surviving photographic examples of “Gordon in His Uniform as a U. S. Soldier.”
The same wood engravings used to illustrate Gordon “As He Entered Our Lines” and “In His Uniform as as U. S. Soldier” were re-purposed in Vincent Colyer's 1864 book,  Report of the Services Rendered by the Freed People to the United States Army: in North Carolina, in the spring of 1862, after the battle of Newbern.  This time, they show Furney Bryant before and after becoming a member of the USCT. 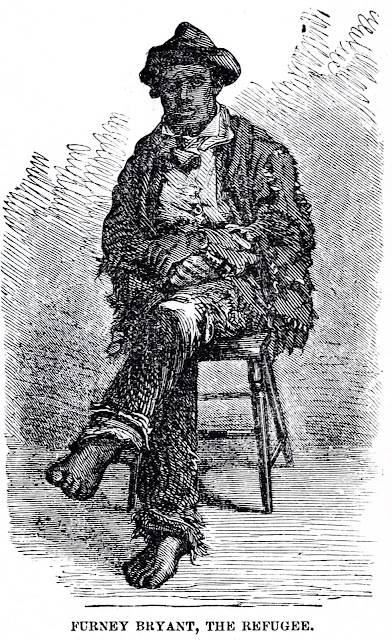 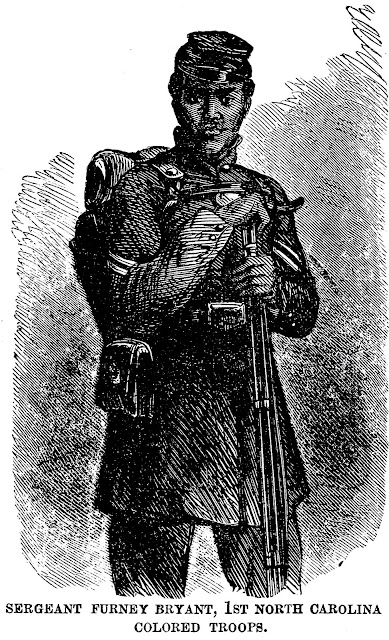 David Silkenat suggests that Colyer may have been the artist of these wood engravings and may even have been the author of the Harper's article. The publisher's abstract of Silkenat's 2014 article, in American Nineteenth Century History, says “that there is good evidence to suggest that the accompanying article {in Harper's} was largely fabricated and much of what we think we know about ‘Gordon’ may be inaccurate.” I'd suggest that the historical accuracy of the article in Harper's may not matter much in comparison to it's usefulness in the 1863 struggle to win northern acceptance for emancipation and indeed for the war itself. This story helped turn the tide at a crucial moment.
Posted by Allen Browne at 12:00 AM