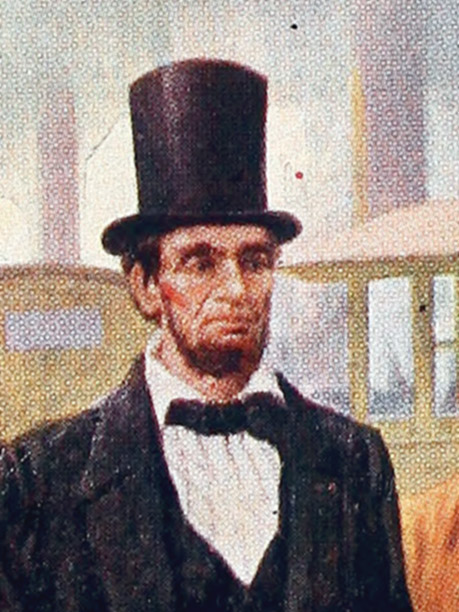 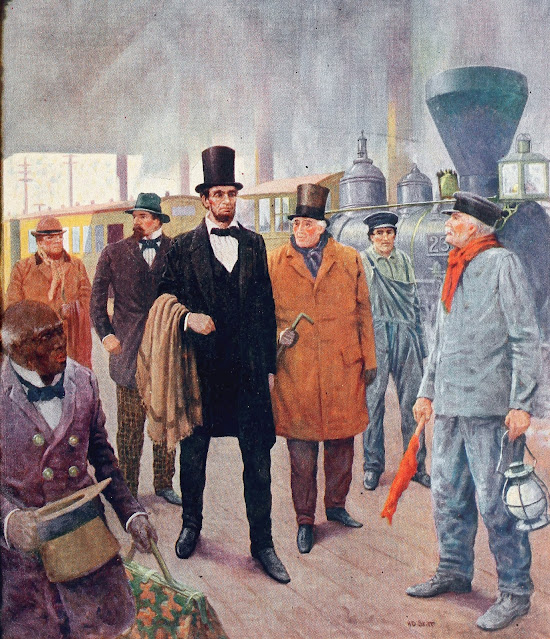 This painting, by Herbert D. Stitt, of Lincoln Arriving in Washington DC February 23, 1861 appeared on the cover of the B&O Magazine, February 1922. Stitt worked for the Baltimore & Ohio Railroad as an illustrator and staff artist from 1912 to1932. The blurb inside the cover read:

The Cover Picture of This Issue

The picture on the cover of this issue is a reproduction of an oil painting by Herbert D. Stitt, staff artist of our Magazine. It portrays the arrival of Abraham Lincoln in the old Baltimore and Ohio station in Washington on the morning of February 23, 1861, just preceding his first inauguration.

The outline of the old Baltimore and Ohio station in Washington is faithful to the subject, as will be attested by many of our employees who saw it before it was torn down. Engine 236, which was used to bring Mr. Lincoln from Baltimore to Washington, is also faithfully portrayed.

The artist's conception of the great Civil War president is an unusually fine one, the dignity and strength of his character being well represented. His physical aspect shows his great height and awkwardness — yet his underlying bodily strength and poise, and the critical work before him is reflected in the stern and careworn appearance of his face.

Of the other figures in the picture, that immediately behind Lincoln is Ward H. Lamon, whom Lincoln chose from among his intimate friends in Springfield, Illinois, to accompany him on the trip to Washington, through cities whose loyalty to the Federal cause and hence to the president-elect, was not beyond question. Lamon was noted as a "minute" man, powerful of physique and expert in the handling of weapons, a likely bodyguard for his friend and president. Allan Pinkerton, the first of the well known Pinkerton family of detective fame, is in the extreme background. Elihu B. Washburn, who met Lincoln in the station, is at his left. Washburn was later secretary of state in the cabinet of President Ulysses S. Grant, and was also ambassador to France in 1869.

These three figures would be easily recognizable by people who knew the men, for they are painted from photographs taken at the time.

The other figures in the picture, the old darky on the left with the carpet bag, presumably Washburn's servant and coachman, and the engineer and fireman of the train, are conceptions of the artist, but none the less realistic. -- B&O Magazine. 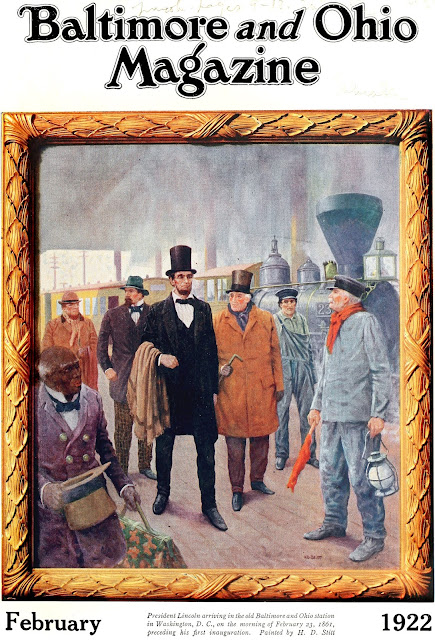 Compare this calm and well dressed Abraham Lincoln to the images that appeared in various publications in 1861 showing the president elect sneaking in disguise through Baltimore.

See "Passage through Baltimore" by Adalbert John Volck in the Portrait
Gallery.
Posted by Allen Browne at 12:00 AM