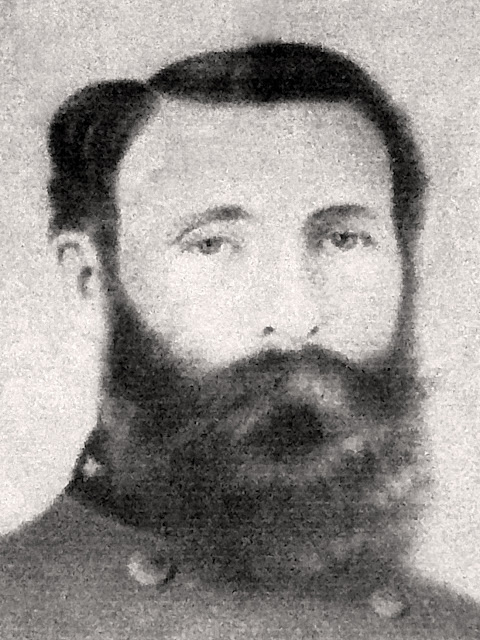 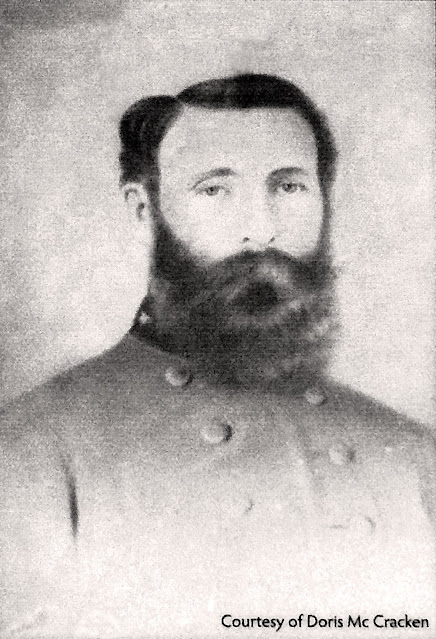 This photo of John Randolph Lane is on display at the Chatham County Courthouse in Pittsboro North Carolina.

JOHN RANDOLPH LANE (1835-1908)
Chatham Civil War Hero
Enlisting in 1861 as a corporal in the Chatham Boys, a company that drilled at Matthews Crossroads (later Siler City), John Randolph Lane was promoted steadily after many battles in which the 26th North Carolina Regiment participated. During the Battle of Gettysburg in 1863, he was shot by a Federal sergeant as he advanced the regimental colors.
While recovering from his wounds he saw further combat as leader of his regiment until wounds and exposure finally put him out of action. Recognized by his fellow soldiers for his experience, judgment, and wisdom Lane was also said to be sage, kind, and self disciplined.
Returning to his home on Little Brush Creek after the war, Lane operated a general store, cotton gin, and grist mill. He eventually met the Federal sergeant, Charles McConnell, who wounded him. His friendship with his former enemy is reflected in a reconciliation speech he gave at the 40th anniversary of the Gettysburg battle in July 1903. In his closing remarks Col. Lane noted that “Year by year the relentless temper of war is giving way to the gentle tones of brotherhood and peace. Your valor is coming to be regarded as the common heritage of the American nation.”  -- Chatham Historical Museum. 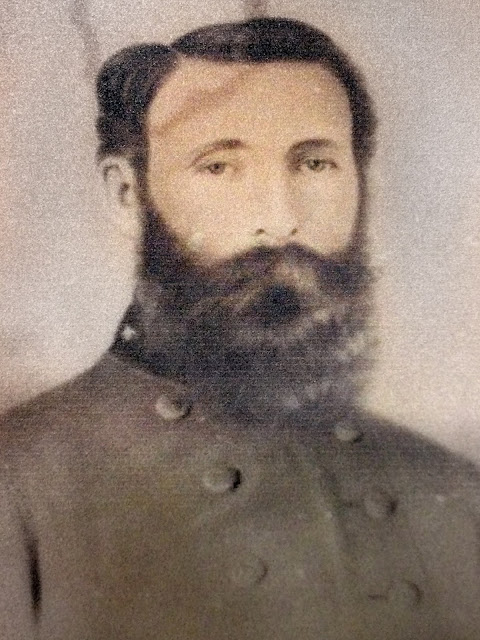 See Fred J. Vatter's 2003 discussion of John Randolph Lane and The Chatham Boys, which starts with consideration of this photo.
The 1887 painting below entitled Three Colonels of the 26th North Carolina Regiment by William George Randall shows John R. Lane on the left, Harry K. Burgwyn in the middle and Zebulon Vance on the right. 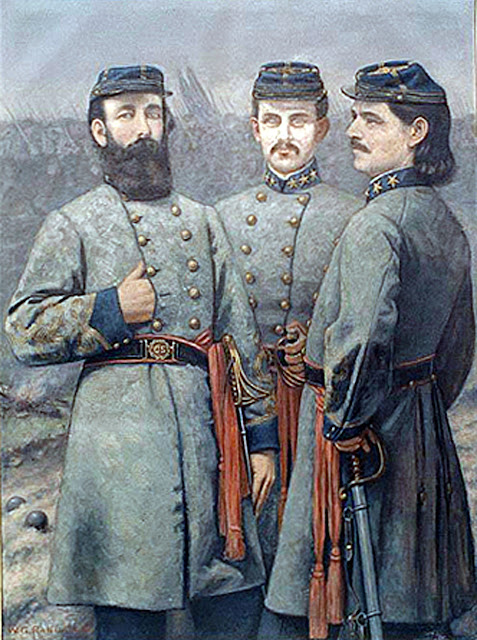 W. G. Randall '87
This photo of 29 year old Colonel John R. Lane appeared on page 46 of George C. Underwood’s History of the Twenty-sixth Regiment of the North Carolina Troops, in the Great War, 1861-'65 , 1901. It appears to be the model for Lane in Randall's  painting. (See the models for Burgwyn and Vance as well.) 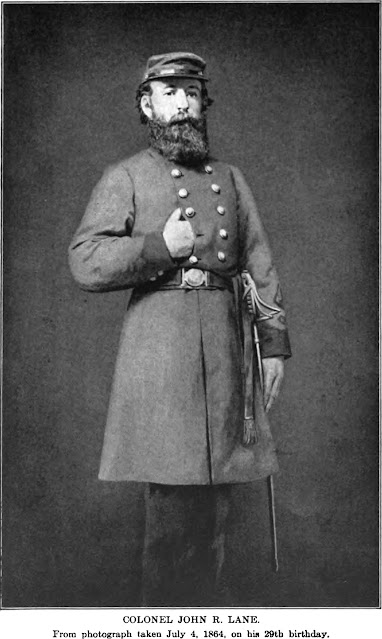 Assistant Surgeon Charles Underwood describes the incident of Lane's wounding on the first day at Gettysburg:

Just as the last shots are firing, a sergeant in the Twenty-fourth Michigan Regiment (now the President of the Iron Brigade Veteran Association, Mr. Charles H. McConnell, of Chicago), attracted by the commanding figure of Colonel Lane carrying the colors, lingers to take a farewell shot, and resting his musket on a tree, he waits his opportunity. When about thirty steps distant, as Colonel Lane turns to see if his regiment is following him, a ball fired by this brave and resolute adversary, strikes him in the back of the neck just below the brain, which crashes through his jaw and mouth, and for the fourteenth and last time the colors are down. The red field was won, but at what a cost to the victor as well as to the vanquished.

On July 4, 1903, John R. Lane was photographed with Charles McConnell on the Gettysburg Battlefield in front of the Monument to the 24th Michigan where McConnell had wounded Lane on July 1, 1863, 3 days before Lane's 28th birthday.  July 4, 1903 was his 68th. 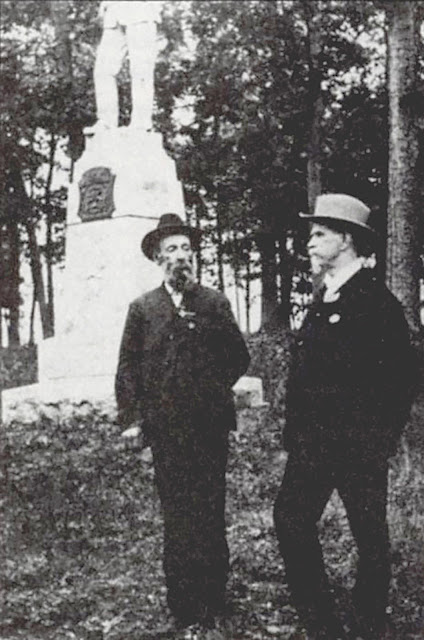 John R. Lane and Charles McConnell
July 4, 1903
Col. Lane's speech at the 40-year Gettysburg reunion was published in the Raleigh News and Observer, on July 5, 1903.
The two former adversaries first re-met on May 22, 1903 in Raleigh, a meeting arranged by  Harry K. Burgwyn's brother, William.  The Winston Salem Union Republican for June 4, 1903 reports that as part of their re-union Lane and McConnell visited the North Carolina State Library in Raleigh to view the painting of the “Three Colonels.”
(In the taking-it-all-back department: Judkin Browning points out that that Charles Underwood was not an assistant surgeon in the 26th Regiment and probably did not write the history that bears his name. Browning sees William H. S. Burgwyn as the main writer behind the history of the 26th NC and casts doubt on its veracity.  Browning attributes the famous story that McConnell's last shot hit Lane to Burgwyn's conflation of Seminary Ridge and McPherson's Ridge:

Although it is a great story, it is most likely not true. Every contemporary source (including Lane’s own speech in 1890) attests that Lane was wounded just shy of the summit of McPherson’s Ridge. McConnell almost certainly did not fire his last bullet until he was departing Seminary Ridge, four hundred yards away. -- Judkin Browning

It was, after all, William Burgwyn who told story to McConnell and Lane. But the re-union story still holds up as an example of early 20th century reconciliation, since both Lane and McConnell believed that McConnell had shot Lane.) 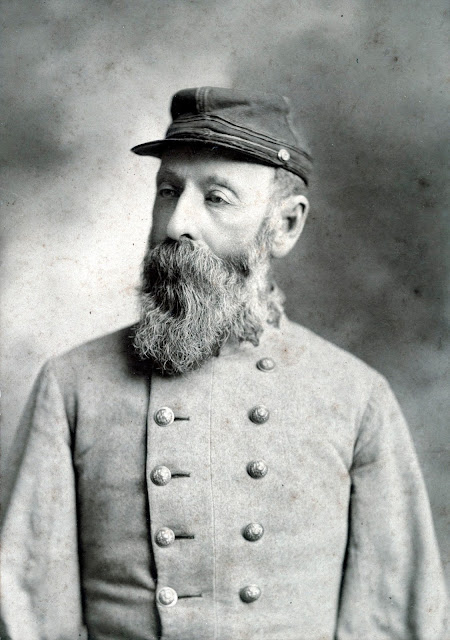 Col.  Lane was Chief Marshall for the dedication of the (recently removed) Confederate Monument in Pittsboro on August 23, 1907.
John Randolph Lane died in December 31,1908 and is buried in Brush Creek Baptist Church Cemetery in Bear Creek North Carolina. His obituary appeared in the Raleigh Farmer and Mechanic in January, 1909.   Find-a-Grave has a photo by Kim Walters of his headstone. 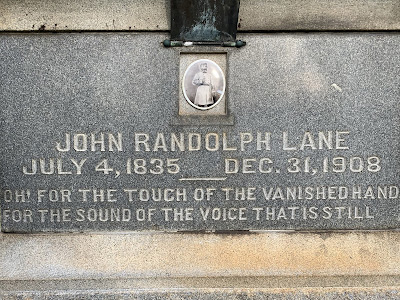 John Randolph Lane
July 4, 1835___Dec. 31,1908
Oh! For the touch of the vanished hand
For the sound of the voice that is still
The verse is from Break, Break, Break a poem by Alfred, Lord Tennyson. The attached photo shows a relatively youthful image of John Randolph Lane that looks a lot like the W. G. Randall painting and the 1864 photograph. 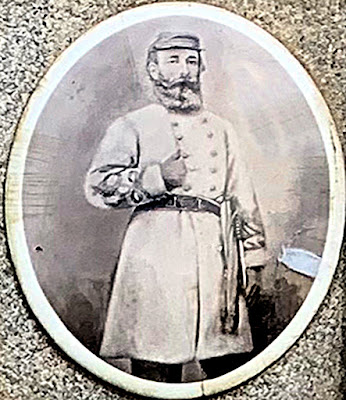