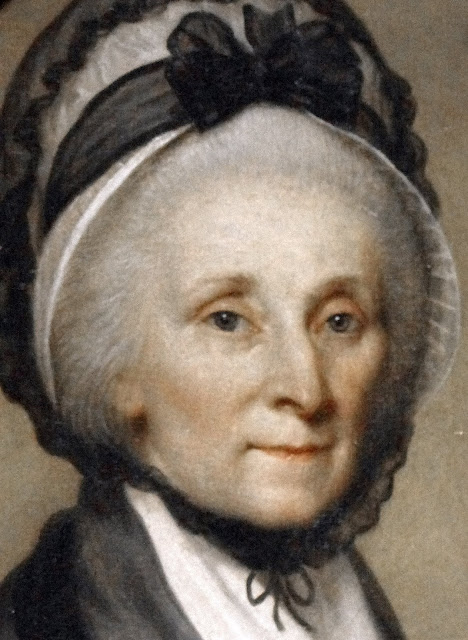 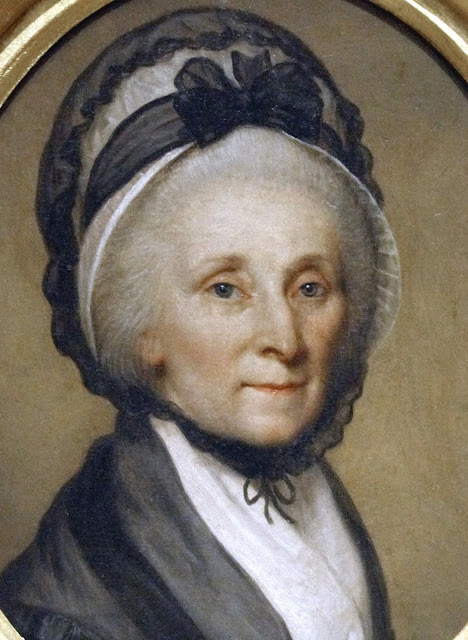 This portrait of Mrs. John Hesselius by Adolph Ulric Wertmüller hangs in the Baltimore Museum of Art in Baltimore, MD.


Swedish born and French trained, Adolph Wertmüller escaped the French Revolution with a brief visit to the United States in 1796. That year, he painted Mary Hesselius (1739—1820). She wears her 57 years lightly in this small oval portrait still in its original frame. In his register of portraits, Wertmüller recorded finishing the image near Annapolis at “Primrose Hill” where Mary lived with her second husband, the artist John Hesselius (1728—1778), three of whose paintings hang in this gallery. Wertmüller returned permanently to America from Sweden in 1800, eventually becoming related to the Hesselius family through marriage. The portrait is thought to have been exhibited at the Peale Museum in the early 1820s. Like many portraits in the BMA collection, this one descended through the sitter's family. It retains its original frame. -- BMA 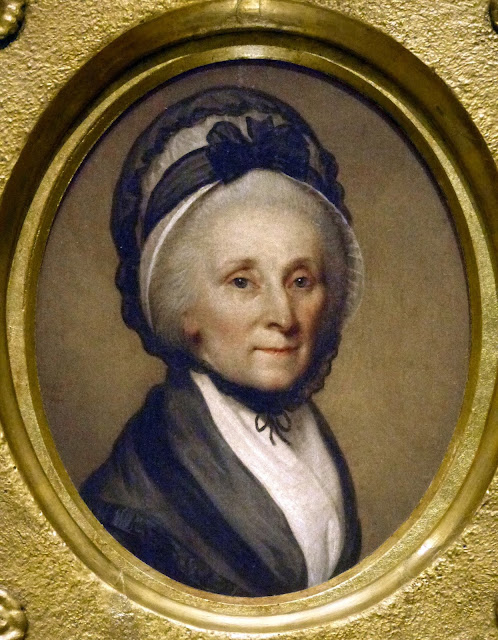 Mary Young married Henry Woodward of Annapolis in 1755. The announcement in the
Maryland Gazette, Jan 9, 1755 described her as “Miss Mary Young (Daughter and Heiress of the late Mr. Richard Young, and Grand Daughter of the late Honourable Samuel Young, Esq;) a young Gentlewoman of a most amiable Person, happy Temper, and pretty Fortune.” 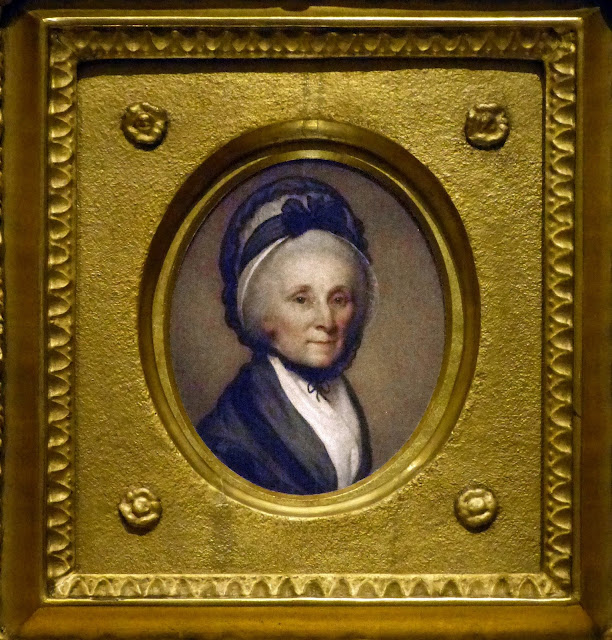 J. D. Warfield in his 2009 book The Founders of Anne Arundel and Howard Counties, Maryland. ... in his discussion of the Ridout family mentions a  portrait that may be this one:

Samuel Ridout, ... was the friend and father-in-law of Rev. Walter Dulany Addison. From him descends Dr. Wm. G. Ridout, of Annapoils, who possesses a handsome portrait of Mrs. Mary (Young, Woodward) Hesselius.

One of her descendants, upon seeing for the first time, the above portrait of Mrs. Hesselius, asked, Dr. Ridout, “What queen is that?” The reply was, “You are not far from right in calling her a queen, for she had all the graces of a queen, and to her own family, she was a queen of hearts.” 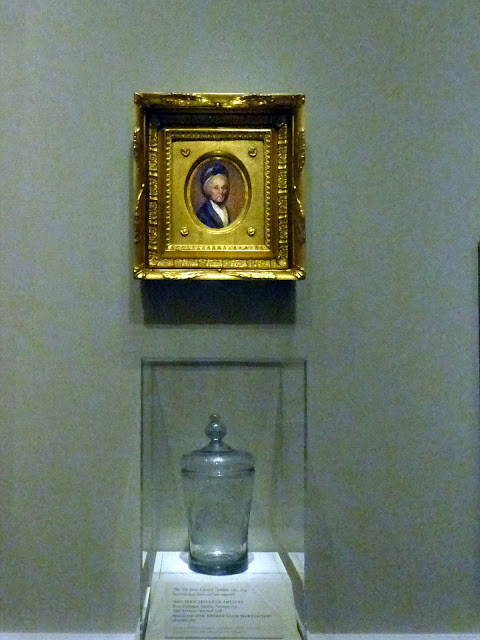 Mary Hesselius was likely buried in the family cemetery at Primrose Hill. The cemetery still exists in such a tumbled down state that only one broken burial vault can be found.  The Anne Arundel Genealogical Society says this of the graveyard at Primrose Hill:


“Primrose Hill” was owned by Mary Young Woodward Hesselius, a niece by marriage to Amos Garrett.  Her farm was purchased in the 1740’s.  Mary “is buried here with her infant children, her parents and her husband, John” according to an Annapolis Recreation and Parks Dept. brochure.  The brick burial vault is exposed and broken at the top and both ends.  No tombstones are visible.  Mr. Orlando Ridout has researched this graveyard and felt that Mr. Hesselius probably is not buried here.

The graveyard however has become the subject of an urban legend concerning the  “Witch of Truxton Park.” William H. Cooke in his 2012 book Witch Trials, Legends and Lore of Maryland says:


Taking us back to Annapolis, there is a local legend regarding a witch whose ghost is said to inhabit Truxtun Park. Truxtun Park is an area off of Spa Creek where people go to walk or run, play tennis or other sports and to launch boats. Out on the outskirts of the park, near the baseball field off of Hilltop Lane (38° 57’ 44.03”N, 76° 30’ 07.50”W on your GPS device) there is a small grave or crypt and allegedly there are more graves although they are covered by the dirt and grass. According to the local tales, the witch of Truxtun Park was interred there years ago, possibly in the 1800s and at night she stalks the park.

It is said that on some nights you can see the ghosts of her victims hanging from the trees. One legend says that the witch was hanged from one of the trees in the park and sometimes her ghost is seen hanging. Of course, there is no documentation to support this story. Mary Young Woodward Hesselius, a Methodist woman who lived on the property in the early 19th century, is thought for some reason to be the real person behind the witch legend. for reasons unknown, It is thought that the grave reported to be that of the witch may indeed belong to a businessman, Captain Louis Neth, who in the 19th century purchased the property.

There does not appear to be any evidence to support the rumors and stories that a witch ever lived on the property, let alone that she was buried there and still haunts the place. Still, why let facts get in the way of a good story? -- W.H. Cooke