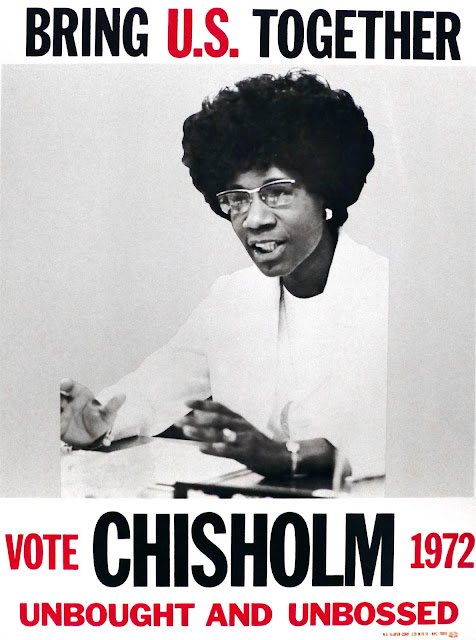 This 1972 Lithographic poster of Shirley Chisholm (1924-2005) hangs in the National Portrait Gallery in Washington, DC.


“Unbought and unbossed,” Shirley Chisholm was a strident voice both for the underrepresented and against the ingratiating, corrupt nature of politics. She began her professional career as a teacher in New York City but quickly turned to public service, serving in the state's General Assembly from 1964 to 1968. In the latter year, she became the first black woman elected to the United States Congress. Undoubtedly, her fluency in Spanish and appeal to women's organizations helped her win New York's Twelfth District seat. There she became an outspoken advocate for civil rights, and protested against the Vietnam War. A co-founder of the National Organization for Women, Chisholm also was an ardent supporter of women's issues.

This poster was used in her 1972 run for the Democratic Party's presidential nomination. Although ultimately unsuccessful, Chisholm inspired many with her message about unification, creating national conversations about a place for African Americans and women in the executive branch and as commander in chief. -- NPG