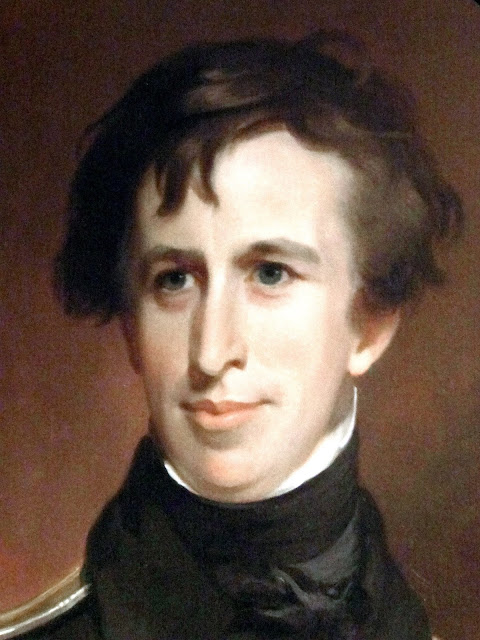 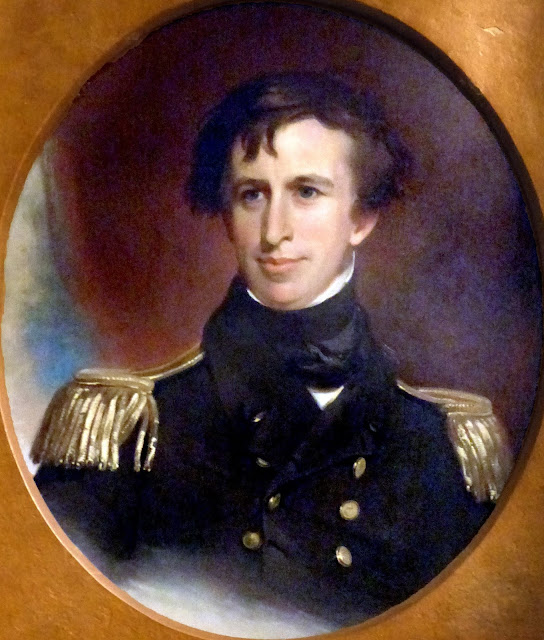 This 1843 portrait of Charles Wilkes by Thomas Sully hangs in the museum of the United States Naval Academy in Annapolis, MD.


Charles Wilkes (April 3, 1798 – February 8, 1877) was an American naval officer, ship's captain, and explorer. He led the United States Exploring Expedition, 1838-1842. His behavior led to two convictions by court-martial, one stemming from the massacre of almost 80 Fijians on Malolo in 1840. During the American Civil War (1861–1865) he commanded USS San Jacinto during the Trent Affair, where he stopped a Royal Mail Ship and removed two British subjects, which almost led to war between the US and the UK. -- Wikipedia

This engraving of Sully's portrait of Wilkes appears in Exporers and Travellers by A. W. Greeley, 1902. 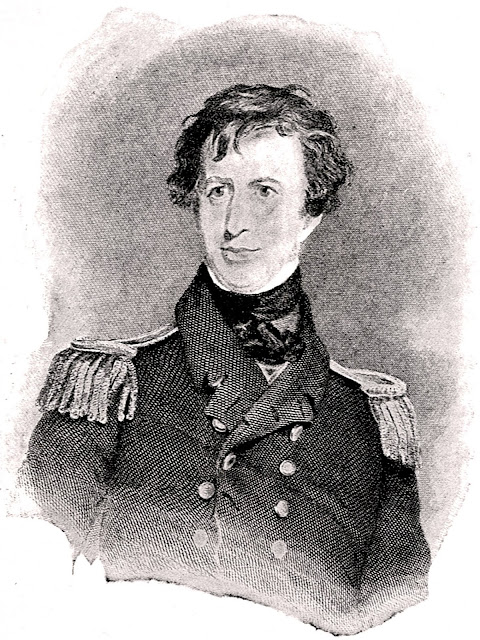 As does this engraving by E. P. Morrill after a sketch by Captain Wilkes portraying Wilkes ship, the Vincennes, in a storm during his Exploring Expedition. 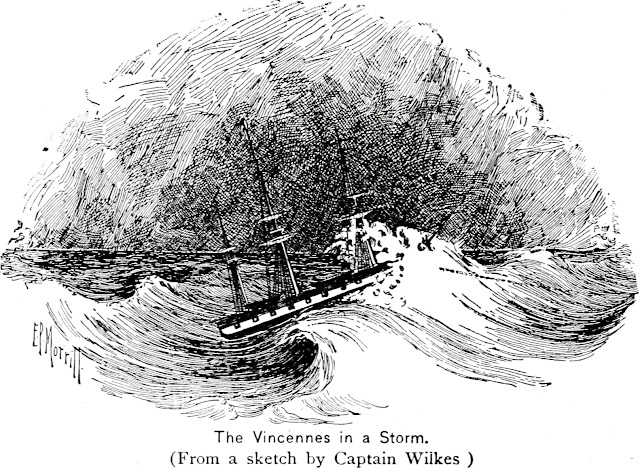 A  plaque by the front door of the U. S. Botanic Garden in Washington, DC, is dedicated to Admiral Wilkes. 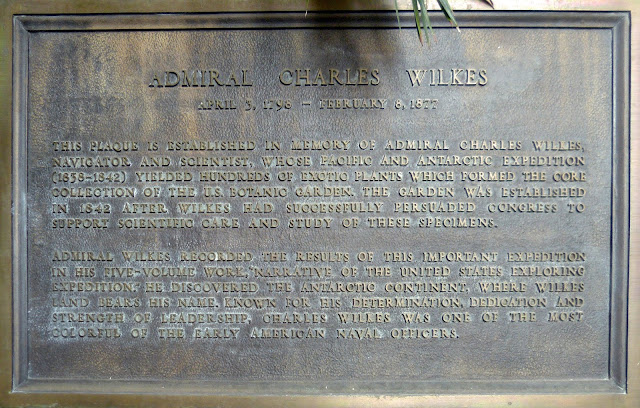 This plaque is established in memory of Admiral Charles Wilkes, navigator and scientist, whose Pacific and Antarctic expedition (1858-1842) yielded hundreds of exotic plants which formed the core collection of the U. S. Botanic Garden. The Garden was established in 1842 after Wilkes had successfully persuaded Congress to support scientific care and study of these specimens.

Admiral Wilkes recorded the results of this important expedition in his five volume work, ‘Narrative of the United States Exploring Expedition.’ He discovered the Antarctic continent, where Wilkes Land bears his name. Known for his determination, dedication, and strength of leadership, Charles Wilkes was one of the most colorful of the early American Naval Officers.

Harper's Weekly in 1861 ran this cartoon of Wilkes capturing Mason and Slidell: 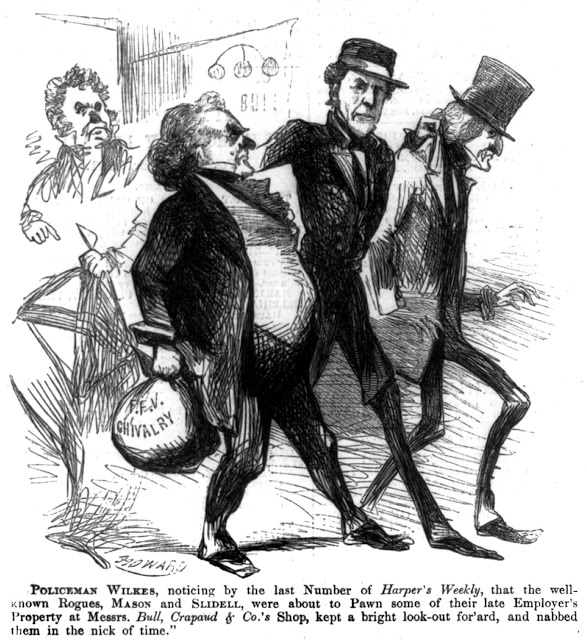 Policeman Wilkes, noticing...that the well-known rouges, Mason and Slidell, were about to pawn some of their late Employer's property at Messrs. Bull, Crapaud & Co.'s shop, kept....look-out...and nabbed them in the nick of time.

On June 28, 1894, The National Tribune, Washington, DC, published this image of Wilkes in an article about the Trent Affair. 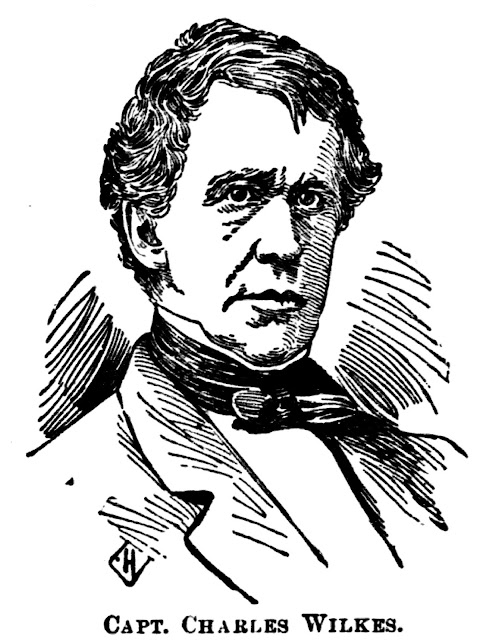 The Sisson (South Dakota) Standard in December 1911 published this photo of Wilkes in an article entitled “The War 50 Years Ago.” 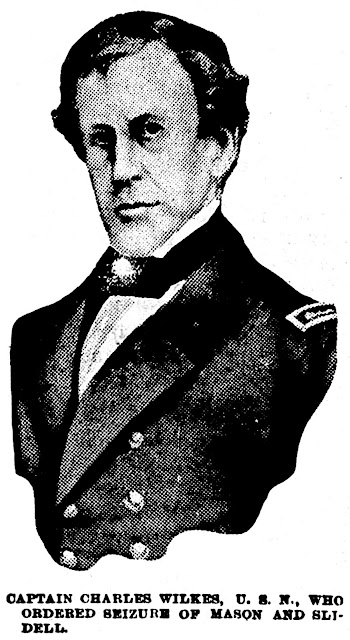